Articles
Harriet Baskas is an award-winning journalist and the author of eight books. She writes, most often, about airports, air travel, unusual museums, and odd adventures for a variety of outlets, including her blog, StuckatTheAirport.com.
April 11, 2020
•
5 min read 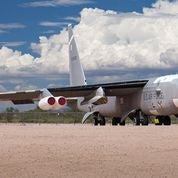 We can’t – and shouldn’t – fly many places right now. And opportunities to participate in the social distancing-safe sport of plane spotting are becoming rare as airlines have cut back service around the world.

But AvGeeks can still fuel their passion by visiting some of our country's shuttered aviation-themed museums via their online virtual offerings and by taking a scroll through treasures in online databases.

The Delta Flight Museum in Atlanta for example, has a wonderful collections database that can be searched by keyword and by a fun Random Images option. The National Air & Space Museum in Washington, D.C. has a vast array of online programs, videos, activities and virtual tours available through its Air and Space Anywhere page. And the National Naval Aviation Museum in Pensacola, FL has an extensive section of virtual tours.

We asked curators, directors and content specialists at a handful of aviation museums around the country to point us to some favorite artifacts to get our virtual tours started. Feel free to add your own in the comment section below.

The Museum of Flight in Seattle, WA has been closed to the public since early March, but it has a robust virtual museum online offering tours inside some of it most iconic aircraft, including the first presidential jet plane.

The museum recently posted a fun “Curator on the Loose” video of Museum Curator Matthew Burchette describing a museum treasure: the Taylor Aerocar III, a 1950s version of a flying car that really flew.

The San Diego Air & Space Museum has been closed since March 16, but Terry Brennan, curator and restoration director, pointed us to the museum’s great bank of online presentations about the museum’s aircraft, artifacts and special collections, including a great collection of stunt flying daredevils doing their thing in the 1920s.

The 80-acre Pima Air & Space Museum in Tucson, AZ is closed and its off-site “Boneyard” Tours temporarily suspended, but the museum offers a livestream of its airfield online as well as photos and detailed information about all the aircraft in the collection.

“One of my personal favorites is our Boeing NB-52A Stratofortress," said James Stemm, the museum’s director of collections. “It’s the oldest surviving B-52 and is one of the two that were modified to carry the X-15 rocket plane. The X-15 was carried aloft by this plane nearly 100 times, often carrying men who would later walk on the moon. It is probably the single most historic aircraft in the museum’s collection.”

Wings Over the Rockies (Colorado)

The Wings Over the Rockies Air & Space Museum in Denver, CO has been closed since mid-March, but the museum has a great series of Behind the Wings videos on its YouTube channel.

We enjoyed Peeps in Space and a look back at the Top Aerospace Moments of the [last] Decade:

Museum content specialist Scott Hennelly also pointed us to videos of some of the museum’s most popular artifacts, including the F-14 Tomcat. “It’s one of our most recognizable aircraft – thank-you “Top Gun.” It spent most of its time as a training and evaluation aircraft for VF-211, the Fighting Checkmates.”

Not all of the memorabilia and historical artifacts from the International Women’s Air & Space Museum is online right now, but you can learn about its exhibits, read articles from the early 1900s written by early America aviator Harriet Quimby (the first woman to get pilot’s license in the United States) and browse the museum’s collections of photos, ephemera and artifacts on well-known and overlooked women in aviation history.

The museum houses a unique collection of photographs of Amelia Earhart, her family, her friends and, of course, her airplanes and her accomplishments, most taken by her secretary, Margo DeCarie.

“The picture of Amelia gardening is one of my favorites from our collection,” said Museum Director Heather Alexander.

“You often see pictures of her by her planes, or meeting important people, or setting records. This image shows the other side of her. The personal side of her. It's one that a lot of people can relate to.”