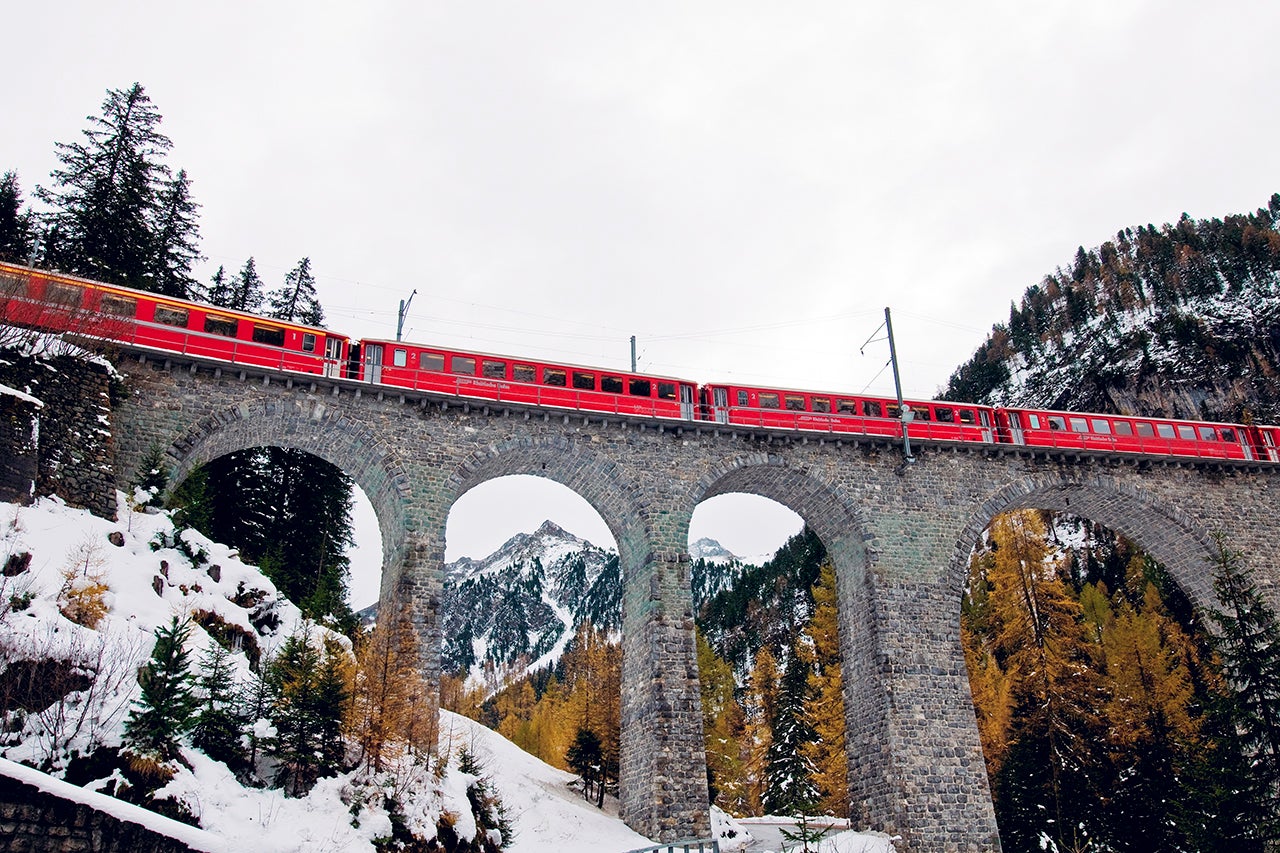 Trains are an essential part of any visit to Switzerland. Thank England: Many of the routes were designed ages ago by British engineers to highlight the country’s stunning landscapes, and even today new routes and excursions are added periodically.

As a Swiss train rounds a bend, passengers are often faced suddenly with a stunning waterfall, a view of the Alps in the Bernese Oberland, or a deep glacial valley dotted with small farms and herds of dairy cows. There are even special excursions that offer gorgeous vistas in train cars that have panoramic windows, like the Glacier Express, the GoldenPass Line and the Bernina Express. Riding any of these is a spectacular experience.

The challenge, of course, is cost. The website for Swiss trains can be confusing, even for someone like me who lives in Switzerland part of each year. It's taken me quite some time to figure out the best value, but now I'm passing on what I've learned to you.
The Glacier Express. Photo by DeAgostini/Getty Images.

Start with the top tier: You can buy a first-class or second-class train pass — the Swiss Travel Pass — for three, four, eight or 15 days. This pass also grants you admission to more than 500 museums and exhibitions. The passes are good for almost all public transportation, including city trams, and offer discounted fares on certain mountain cable cars. These are great passes for people who want to travel several places in Switzerland.

Say you aren’t planning to travel all over Switzerland and instead plan to stay in one place with perhaps one or two excursions. There are other options, though they're not always cheaper.

Saving money, but not a lot, is the Swiss Half Fare Card. For 120 CHF (a little over $120), you get unlimited half-price access to all transportation and some cable cars. It's good for one month. This is a great possibility if you're staying in one place.

Swiss and EU citizens have other options, like 185 CHF for a Half-Fare travelcard via a pre-existing SwissPass for one year. It's confusingly named, but it's distinct from the Swiss Half Fare Card above.

Swiss and European citizens are also eligible for various annual passes that can run into the thousands of Swiss francs.

The Swiss passes can be purchased online in the US, and (with the exception of the Half-Fare travelcard on SwissPass and Swiss-specific offers) are only available for people who aren't residents of Switzerland or Liechtenstein. You can also buy them at airport train stations.

Once you have a pass, you usually don't have to reserve seats except on some of the panoramic journeys. Whatever you do, don't board a train without a ticket. Many trains in Switzerland don't have full-time conductors, operating instead on an honor system buttressed by random checks. If you are caught without a ticket, the fines are steep.

Related stories
5 secrets to getting a luxury cruise for less
Deal alert: Widespread Air Tahiti business class award space to French Polynesia
This no-annual-fee card earns 2% cash back on every purchase — and automatically applies your rewards
You can now fly directly to the South Pacific from the Pacific Northwest
Featured image by UIG via Getty Images