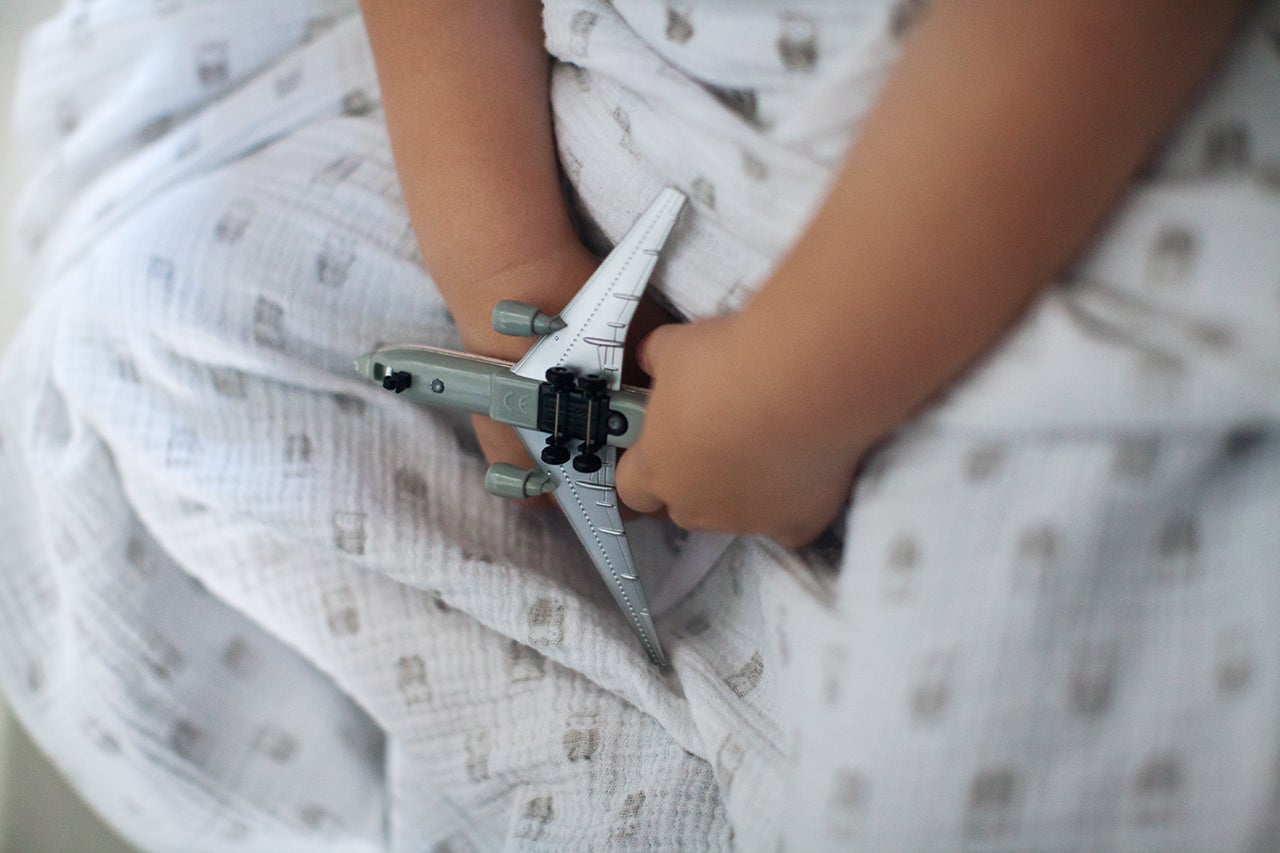 When I booked the flight from our hometown to Philadelphia to visit family, each of my three kids had, individually, been on a plane when they were infants. But -- we’d never traveled with all three in tow. Still, I was optimistic. It’ll be fun, right?! The older ones will finally have a plane trip they may remember and what kid wouldn't want to fly in the sky?

The reality (a confined public space, stale air, the potential of temper tantrums between takeoff and landing) didn’t fully sink in until a few hours after I’d booked the trip and the booking-high had worn off. And then, a deeper level of reality dawned on me: What would the kids, ages 2 years, 4 years and 9 months do on a plane? For almost 2 hours? What would I do with three little kids on the plane?

Technology was not really a viable option. We only had enough devices for one child to use at a time, and there are the inevitable battery deaths or app fails. Plus, bribing a 9 month old with a tablet would only get you so far.

Choosing the Right Toys for the Flight

I set about finding good plane toys. My criteria:

The Toys We Brought on the Flight

My 4 year old loves Highlights sticker books. These have hidden pictures (think: a cup masquerading as a pocket). My daughter has experience with them from previous car trips, so aside from asking for help to find the occasional peapod or starfish, she can do these quietly and independently.

Art supplies, like a washable marker set that comes in its own container, a Magnatab, Wikistix and mess-free Crayola materials. I particularly love the markers that only work on the specific paper they come with so there's no risk of the kiddos making a mess.

A cheese lacing toy. For whatever reasons, people swore by this on the internet. This one looks like a piece of Swiss cheese with a lace that can be threaded through those holes.

Spot It Junior game that involves placing two cards down and seeing who can spot the matching animal pair first.

Squigz, a construction toy that relies on suction cups to hold the pieces together.

Kid-O Magnatab magnetic drawing toy that uses a magnet pen to pull magnet balls to the surface of the toy to create images.

For the baby, I brought a set of pipSquigz, or larger versions of the Squigz that rattled a little.

The sticker books were a hit and entertained my two oldest kiddos for the majority of the flight. On the way there and back, they searched for everything from toothbrushes to pizza slices. (Pro tip: Save half your stash for the way back so the kids don’t go through everything before you’ve landed at your destination.)

The cheese toy was intriguing for my kids, but did not hold their attention for very long. Spot It Junior was a hit at our destination, but I opted not to bring it out on the plane because I was afraid that the cards would go flying and I’d either lose the game or have to pick them up.

The Magnatab seemed like a good idea, but the popping of each magnet ball into place was shockingly loud, especially on a quiet flight. This toy would be great to bring out in a larger area, and both girls liked playing with it while we waited for the flight.

The self-contained art sets (one crayon and one marker) were a hit and they returned to their drawings between playing with other toys and doing the hidden picture searches. I highly recommend these — the ones that they’re playing with above were found for cheap in the dollar bin.

The Squigz were not a hit on the plane (and, to be honest, when the girls did play with them, the pieces ended up on the floor too often for it to be fun). However, I would still recommend them because they had potential and the kids loved playing with them at our destination.

The baby liked the PipSquigz, both the rattle and pulling them off the seatback and tray table (just be sure not to disturb anyone seated in front of or around you). The nice thing about these: We could also attach them to the back of the seat, which was helpful because the tray table was small.

We survived the flight without pressing play on any apps, and the kids had fun. In all, I'd rank it as a successful first flight with three kids. In the process, we learned quite a bit about which toys worked very well on the plane and which we will leave behind the next time around.

Looking for more plane entertainment ideas? Check out 10 Ways to Entertain Kids on a Plane without Tablets. And, for those flying with toddlers, we feel you. Here’s more on how to fly with a 2-year-old in tow.