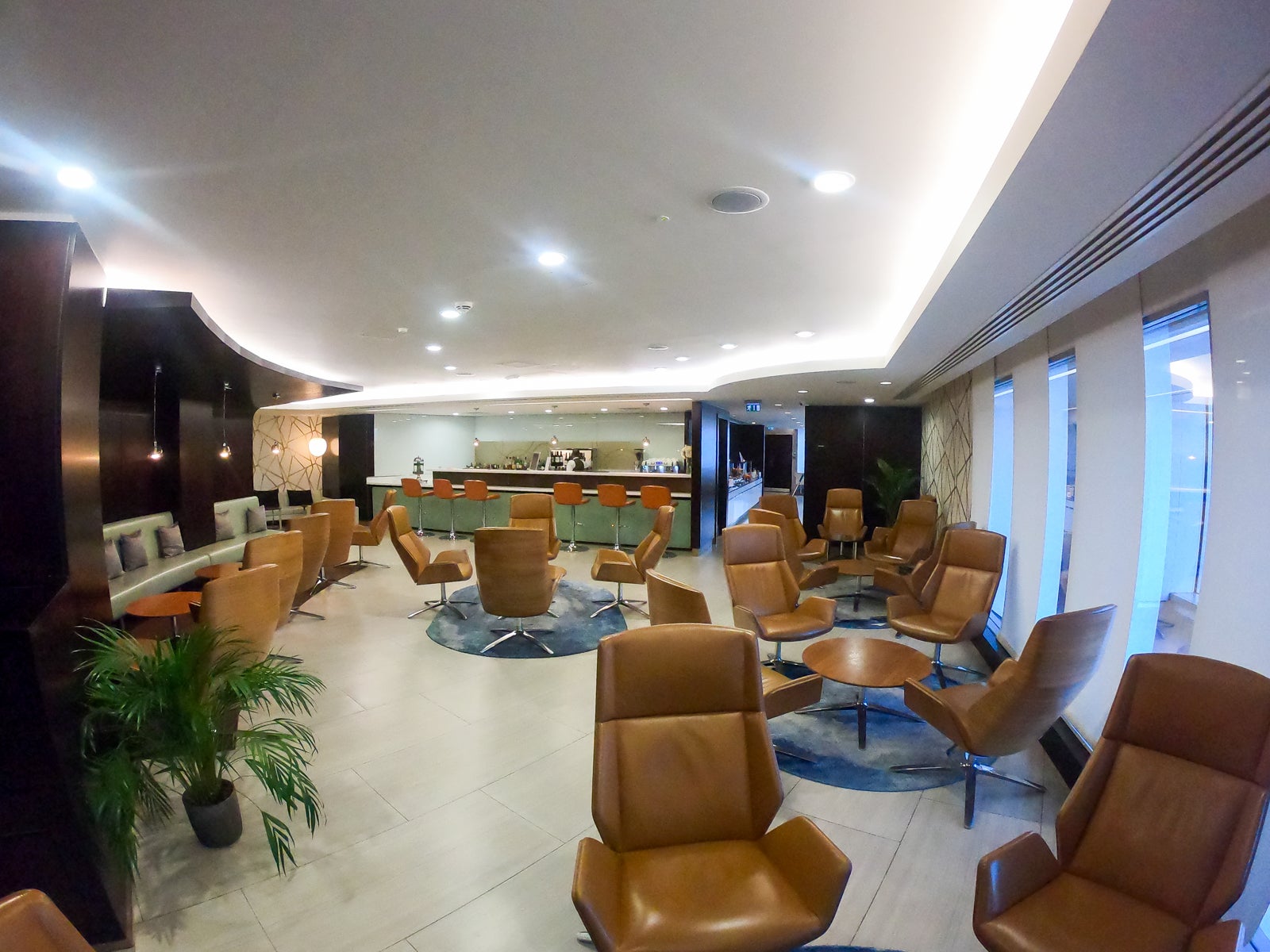 There are several lounge pass programs, but the largest is Priority Pass, which boasts more than 1,200 lounges around the world. With a membership, you can help to make your flying experience more comfortable with a little preflight relaxation in one of those lounge spaces.

There are two main ways to get a Priority Pass membership. First, you can purchase one outright. Alternatively, The Platinum Card® from American Express offers a complimentary membership for being a cardholder. Enrollment required.

Once you've got your Priority Pass membership, you'll be forced with the tricky question of which lounge to use. Most airports in the UK have at least one lounge accessible through Priority Pass. Heathrow Airport (LHR) has no less than eight in its departures areas. There are sometimes quite stark differences between the quality of the lounges, so here's a guide to help you decide which Priority Pass departure lounge to spend your time in before you fly.

Plaza Premium Lounge
Hours: 5am-10pm daily
Conditions: Maximum three-hour stay; children younger than 2 are admitted for free and must be accompanied by an adult.

Terminal 2's Plaza Premium lounge is arguably the worst at LHR. Why is it the worst? Well, it's dark, dingy and could definitely do with a makeover. There are no windows whatsoever, which means no views of the runways. The few times I have been to this lounge, it's been very busy with no space to sit in the comfy areas. Recent changes mean that spirits are no longer included with your entry. So all in all, if you don't have status with Star Alliance and are not traveling in a premium cabin, this is your only lounge option in T2.

Terminal 3's Priority Pass offering isn't quite as good as Terminal 4's, probably due to the fact that T3 has several amazing Oneworld airline lounges and many of the passengers flying through the terminal will have status or will be flying in premium cabins. But, if you do find yourself in Terminal 3 without either status or a business-class ticket, there are two Priority Pass lounges at your disposal.

No1 Lounge
Hours: 4:30 a.m.-10:30 p.m. daily
Conditions: Access permitted three hours prior to departure; children younger than 2 are admitted for free and must be accompanied by an adult.

The best T3 Priority Pass lounge is the No1 Lounge, purely for the fact that there's an Aa la carte menu and a great range of drinks included with your entry. Yes, it's not a very varied food menu and the portions are small, but it's little perks that really makes a Priority Pass lounge stand out. Beer on tap and free spirits and mixers are also great bonus features if you like a couple of preflight drinks. The views on to the taxiways and runway are also better here than the other Priority Pass lounge in T3. The cinema actually feels quite like a real cinema despite people using the room as a place to sleep.

The downside? In the few times I've visited the lounge lately, it has been very busy with only a few empty spots dotted around the place — especially not great if you're traveling in a group. You can reserve space, though, as I've seen certain areas like in the 'Library' area.

The Aspire Lounge
Hours: 5:30 a.m.-10:30 p.m. daily (subject to seasonal changes)
Conditions: Maximum three-hour stay; children younger than 2 are admitted for free and must be accompanied by an adult.

The Aspire Lounge in T3 is a very close second to the No1 Lounge. There are three main reasons why this is inferior: One, it's very small. Two, the food is very basic. And three, there is no a la carte menu. The lounge does feel new and fresh despite how busy it is.

If you're looking to sleep or get some proper rest, there's a sleep area tucked away at the back of the lounge with quite comfy-looking lounger beds.

The decision about which of these to visit is probably down to personal preference. If given the choice, I'd spend my time in the No1 Lounge.

If you're flying out of Terminal 4, you're in luck. These have two of the best PP lounges that Heathrow has to offer.

Where do I even start with this lounge. It's called The House for a reason. The entire time I spent there I was waited on hand on foot and really made to feel like a valued guest even though I wasn't actually flying with Etihad. Despite that fact it's no Concorde Room, the a la carte restaurant is one of the best in terms of service and food.

Another great thing about this lounge is that it was practically empty. Etihad only operates three (soon-to-be four) year-round flights a day from London (LHR) to Abu Dhabi (AUH). So at times in the day when there is no flight scheduled, this lounge gets especially quiet.

Plaza Premium
Hours: 5am-10pm daily
Conditions: Maximum three-hour stay; children younger than 2 are admitted for free and must be accompanied by an adult.

The Plaza Premium Lounge is the second-best Priority Pass lounge in Terminal 4, and probably in the top-three in all of LHR. Why? It pretty much has everything. The food selection is small, yet tasty. The décor makes it feel like a nice hotel lobby, reminiscent of the Cathay Pacific Lounge in Terminal 3. There are entire bedrooms — for a fee, of course — complete with private shower room and toilet if you're delayed or have a long layover. And there's a separate bar area to help to keep the main lounge area quiet.

There are a couple of minor downsides, though. The first one being that the coffee is from a rather terrible machine and tastes like dirty water. So if that's a deal breaker, then this isn't the right lounge for you. The second — and most important for the AvGeeks — is that the runway and apron views from this lounge are pretty nonexistent.

SkyTeam Lounge
Hours: 5am-10pm daily
Conditions: Maximum three-hour stay; children younger than 2 are admitted for free and must be accompanied by an adult.

To say that this is a terrible lounge would be doing it an injustice. But, it certainly pales in comparison to the other two in Terminal 4. Given that this is SkyTeam's business-class lounge for a number of airlines, I was quite shocked at how basic and lacking in atmosphere the place was. The only real thing to write home about is the fact that you get a massage thrown in as part of your entry. Other than that, nothing was particularly bad, but nothing was particularly good, either. That said, the runway views from here are probably the best of all the Priority Pass lounges in Terminal 4.

So, why not make the most of your time in Terminal 4 and get your money's worth by visiting all three? SkyTeam Lounge to start with for a quick facial to chill you out. Next up, a couple drinks at the bar in the Plaza Premium Lounge (or a nap if you need it), and then head over to The House for a sit-down dinner in the restaurant before relaxing with a drink afterward.

T5 is British Airways' hub terminal. This is really where a difference is noted in the quality of the Priority Pass lounges because a large number of passengers will already have access to one of the four British Airways lounges in the terminal. On the face of it, T5's only Priority Pass lounge is all right, but if you've visited other lounges in the airport, you'll really start to notice a difference.

Aspire Lounge
Hours: 5am-10:30 p.m.
Conditions: Maximum three-hour stay; children younger than 2 are admitted for free and must be accompanied by an adult.

For starters, this lounge used to be a Spa. Now, however, there's a void right in the middle of the lounge of wasted space that was presumably once occupied by it. This empty space makes an already-overcrowded and hot lounge feel even busier and hotter. The staff seemed to be absolutely rushed off its feet and people were literally clambering over each others' suitcases to get to the (tiny) buffet. Granted, this could just have been my one-time experience, and at other times of the day it might not be so busy, but I certainly did not feel relaxed during my stay.

After having been to each of the Priority Pass lounges at Heathrow, this is how I'd rank them:

Some Priority Pass lounges are far better than others. If you have some time to kill in the airport and want the best experience at Heathrow with your Priority Pass, Terminals 3 and 4 are your best bet.

Featured image by DCIM100GOPROGOPR0197.JPG
Editorial disclaimer: Opinions expressed here are the author’s alone, not those of any bank, credit card issuer, airline or hotel chain, and have not been reviewed, approved or otherwise endorsed by any of these entities.