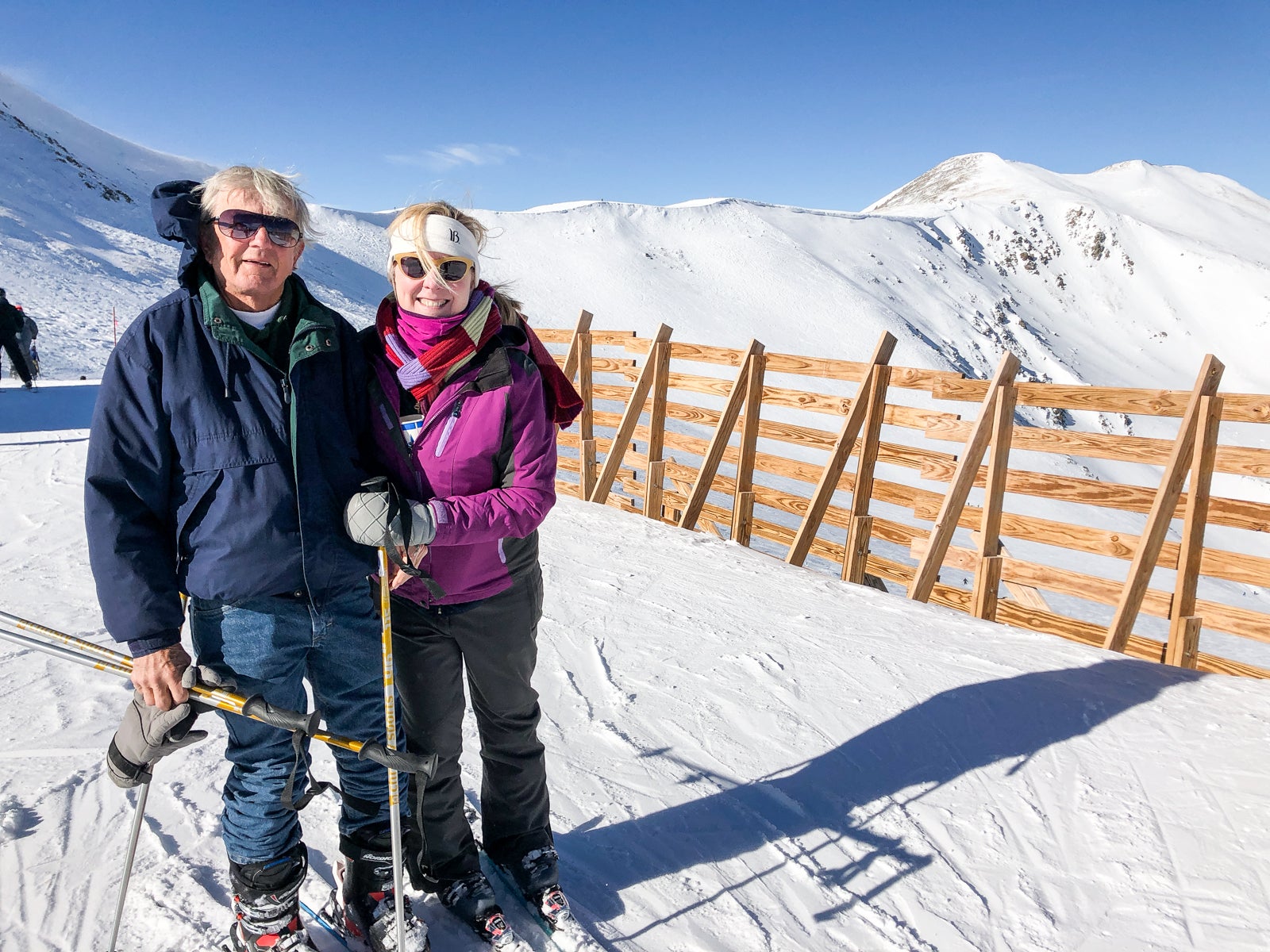 Time is a relentless companion (both friend and foe) that has a way of ticking itself quickly through a week, a month, a year ... a lifetime. We all have repeated the same refrain: "Where has time gone?" I thought about time recently when I skied a day at Breckenridge. It was my first time on the slopes since turning 70. I started skiing in the 1970s and now I am skiing while in my 70s. Where did those years go?

About 40 years ago, it seemed as though everyone was skiing. Resorts that were born in the 60s were expanding their footprints and new ski areas were popping up to meet the burgeoning demand in the 70s. Keystone, Copper Mountain, Telluride, Snowbird, Northstar, Kirkwood and Big Sky all saw first tracks being cut on their groomed runs in the early 1970s. T-bars, rope tows and two-person chairs were replaced and upgraded to three- and four-person lifts, covered chairs and high-speed gondolas.

It wasn't just the doctors, lawyers and successful professionals that were schussing down the slopes on their 200cm Rossignols with Salomon bindings and Nordica boots. While they were certainly well represented, an interesting economic cross section of 20- and 30-somethings caught the fever and started filling up the lift lines at major and minor ski areas all across the United States.

Ski clubs became the rage and groups of friends rented large condos for a week to stay together, ski together, laugh together and après ski together. The groups tended to expand each year in numbers as the ski bug spread. And, for most, the fever included buying personal skis, boots, poles and clothing.

In the 1970s, Skiing Wasn't So Expensive

Skiing has never been cheap, but in the 1970s, it was honestly affordable. In 1979, The Gazette-Telegraph ran an article that said that full-day lift tickets at Aspen would top out at $16. On our first visit to Vail in the mid-70s, a weeklong lift ticket cost $84. Adjusting for inflation, that's about $300 to ski for the week. A one-day walk-up ticket at Vail now costs more than $200 just for the day. When the seniors of today first started skiing in the 70s, it was a recreational pursuit that middle-class America found to be economically viable -- and really fun.

Back then and even into the 1980s, we were on the first lift up, were the last skiers down, ate early or late and skied, skied, skied. Then eat, rest, eat and repeat. Ski trips were discussed and planned throughout the year and ski clubs held and promoted almost monthly meetings and social gatherings.

(Temporarily) Hanging Up Our Skis

Since skiing for us was a long-distance relationship to get from eastern Texas to the mountains of New Mexico or Colorado, skiing activities within our generation of Texans slowed down as children entered the world and our parents left it. We got sidetracked as jobs got busier, positions became more responsible and we endured national economic downturns.

Very relevant to the unintended (temporary) hanging up of the skis was the increased cost of the sport both in general and because our families grew in size to include children. This unexpected ski stoppage was almost universal among our friends. It is important to note though that most of our group did introduce our children to the sport before taking a few decades worth of a pause, and the generational seeds took root and the joy of the slopes has been duly passed on.

But in the last decade, with our children raised and ourselves into retirement -- after almost 20 years of hibernation -- the mountains have again come a-calling.

Our narrow skis that we had long ago purchased, had already become a permanent part of our sports hall of retirement in the garage and our proud boots had disintegrated into shells of their former selves while slumbering in the crowded storage space under our stairs.

Our once neat-o, super cool stylish ski clothing was now better suited for a retro-80s costume party than for a return to active duty. During our exile, skiing had changed. Skis had changed. Gear had changed. We had changed.

As we first prepared to strap into skis again in our early 60s, we looked for a bench to set our pair of buns on as we geared up for the first time in a long time. While figuring out the new gear, we kept thinking of the old adage "It's just like riding a bike" as we strapped in and then inched forward in the lift line until the lift swooped us up, up and away.

And, it was like riding a bike. Four hundred yards down our first groomed run that morning we were grinning ear to ear. It was like the clock had turned back 20, 30, 40 years. The flow, the rhythm, the posture and style was just as we had left it. We thought we should call our friends, right then and there, and tell them that we can still ski. That they could still ski. Let's get the old band back together!

Ever since that reintroduction to the friendly ghosts of winters past, we have purposefully created quick adventures that were built around including at least a day on the slopes. Four visits to Brian Head in Utah, one to Arizona Snowbowl, one to Ski Las Vegas and our recent Breckenridge ski day.

Tips to Make the Most of Skiing at 70

1. Less Is More These Days; Don’t Overdo It

First, we are satisfied with less now than we were back then. We now have no difficulty leaving an hour or two of a ski day unused. We have found we do not need to ski multiple days. Even though we are proud of our physical condition and skiing ability, we do readily accept and acknowledge that there are limitations of which we need to be cognizant. Our legs tire quicker, our reflexes slow and our overall strength and coordination lessens.

These shortcomings are a recipe for a mistake. A mistake is an ingredient that might lead to a fall and a fall could result in an injury that at 70 can be more life-altering than in our 20s. "Cruiser" runs on groomed blue slopes now provide all the challenge and stimuli that we need.

We do think that today's equipment is safer, more functional and comfortable than its predecessors. The matching of boot to binding to ski that is all set for your height and weight truly seems like advanced science. In our first years of skiing, ski brakes were not even allowed on most mountains. A strap connected the ski to your leg to prevent a runaway ski.

The lifts are now generally quicker and transport more skiers per chair than in preceding decades. By being retired and skiing off-peak days at smaller mountains, we had convinced ourselves that lift lines were a thing of the past until we recently encountered Breckenridge with holiday numbers and found out that lift lines are not entirely gone.

There seems to be a lot more black and dark gray apparel than in the colorful 70s and everybody (almost) wears a helmet now, including our daughter (Mommy Points) shown on the left side of the photo below. Unless someone was dressed up as Darth Vader, helmets and dark clothing on the slopes were virtually nonexistent 40 years ago. I'll be honest, we haven't moved to helmets yet as we are used to the cool wind in our hair, but we probably should get with the times.

5. Bring Your Cellphone to Snap Pics

Few changes are as demonstrable as those involving filming, videoing and photo-taking on the slopes. It has gone from Super 8 to large video camcorders to compact video cams to cellphones. Capturing times on the slopes has transitioned from cumbersome and physical to nice and easy.

6. Mix in Other Near-Mountain Activities

These days, it isn't all about skiing on the mountain, so use that to your advantage (see #1) to take some days off the slopes. You can head to see an ice castle in Dillon, Colorado, take advantage of some pretty great restaurants that have popped up near the powder, go dog sledding, or some of our senior friends are raving about snow shoeing as a lower cost and lower impact alternative to skiing.

While we once considered lift tickets to be affordable and fairly priced, we must admit to true "sticker shock" at the walk-up, one-day prices that the major ski areas now charge.

The expense factor to ski at the bigger resorts when you consider lift tickets, rentals and food has, for us, reached that point of negative return. The cost for our two senior selves for one day on the slopes could be as much as $500. The cost to take a family to ski at the big resorts would be, for us, prohibitive. (Here are some tips to take a big family ski trip.) The current economic model suggests that those skiing one to three days will pay the premium price and those that hit the slopes more frequently will be rewarded when purchasing and utilizing one of the season passes such as the Epic Ski Pass. In fact, there are stats that point to the one-trip-a-year skiers now being a small minority of those on the mountain in favor of passholders.

But don't despair as there are discounts to be had even if you aren't a mountain local. Senior KBA Pass allows anyone 65+ to ski Keystone, Breckenridge and A-Basin at a discount. Some individual resorts also offer a senior season passes at greatly reduced rates. Those skiing multiple days at the same resort should investigate this potential cost cutter. For example, Arapahoe Basin sells a senior pass (70+) for $105. Loveland has a similar pass for just $99.

We have found that some areas (mostly small to midsize mountains) do still offer free senior skiing. Super seniors 69 and up ski for free at Monarch (as do kids 6 and under if you want to bring the grandkids). Whitefish in Montana has free skiing starting at 70. Ski Santa Fe offers free senior skiing starting at 72. Telluride offers a Palmyra Pass completely for free to those 80+. As the younger generation might say, #goals. Even more #goals is that Sugarbush in Vermont uses 90 years as its free skiing starting age. We do not know if we should consider this as humorous or optimistic.

Beyond age-based discounts, look for programs like these that let you ski free with your airline boarding pass. And, use the best credit card for ski trips and get rewarded at least a little in the process.

There are a lot of differences between skiing in the 1970s and skiing now in the 21st century as seniors who are in our 70s. The equipment and mountains are safer and easier, our bodies are a bit more wobbly, but the memories and fun are just as good as ever. Safe travels and keep your tips up!

To continue your ski trips into retirement: