A boat, a bike and a hike: The secluded AvGeek spot totally worth the trek 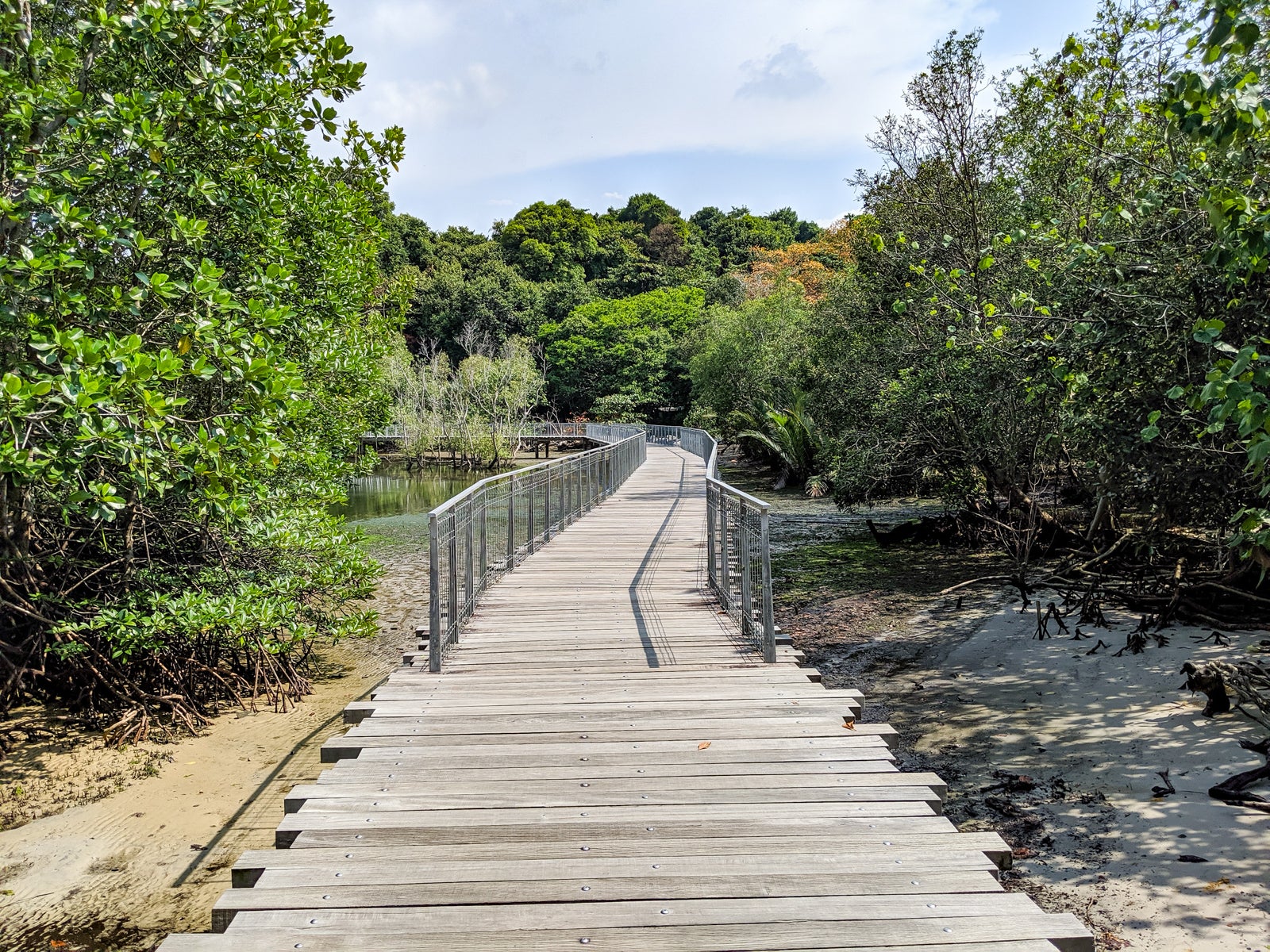 A boat, a bike and a hike: The secluded AvGeek spot totally worth the trek
This post contains references to products from one or more of our advertisers. We may receive compensation when you click on links to those products. Terms apply to the offers listed on this page. For an explanation of our Advertising Policy, visit this page.

There are some wonderful places all around the world for AvGeeks, from Maho Beach in St. Maarten (SXM) to the park next to an In-N-Out by LAX. But there's a spot that I hadn't heard of until a trip to Singapore in late September, and it's one that I highly recommend the next time you're in Singapore.

Actually, there are two different spots. For the easier-to-get-to spot, Changi Beach Park is right in the final approach path for planes landing on Singapore's (SIN) runway 20R. While you can practically be underneath the inbound aircraft, you probably want to be a bit farther back for good photos.

The park is about a 20-minute drive from the downtown core of Singapore. Although you can take a bus out from the city, it requires multiple transfers, so you'll probably want to hail a ride through Grab, an Uber/Lyft-like ride-hailing service. We paid 23 SGD ($17) for a one-way from our hotel in Orchard to the nearby ferry port. The prices from downtown can run just 19 SGD ($14).

But, if you want to get a different view, there's another spot farther up the flight path that provides a great angle for snapping photos of inbound flights while you're surrounded by nature.

The catch? It's not easy to get to. This AvGeek spot takes a ferry, a bike and a hike to reach, but — from personal experience — I'd argue that it's totally worth the effort.

The spot from which we AvGeeked for hours is in the Chek Jawa Wetlands on an island called Pulau Ubin. The island is located just north of the airport and just south of the water border that Singapore shares with Malaysia.

To start your journey, you'll want to navigate to the Changi Point Ferry Terminal, which is right next to the Changi Beach Park spot I mentioned above.

Once you enter the terminal, join the waiting area for the ferry to Pulau Ubin — as my wife Katie, my dad and I did in late September.

The ferry operates between 5:30 a.m. and 7 p.m., but it doesn't run on a schedule. Instead, you'll need to wait until 12 passengers have accumulated for the 10-minute ride across the Strait of Johor.

If you're in a hurry, you can buy out the remaining seats on the ferry. Each passenger pays 3 SGD ($2.17) each way, so the most you'll have to pay is 36 SGD ($26). Payment is only via Singaporean dollars, so make sure that you have enough cash for both directions.

And you're not going to get a fancy boat for that price. Instead, individual boat captains operate so-called "bumboats" between Changi and Pulau Ubin.

Some of the boats and captains are rather, shall we say, practical:

For our ride over to Pulau Ubin, the captain didn't even tie up the boat. Instead, he backed up against the dock until we all jumped off before pulling away.

From the boat dock, you'll walk down the jetty, under the welcome sign and turn left to head into the small village.

There will probably be taxi drivers available near the docks. If you want the easiest way out to the plane watching spot in the wetlands, you'll want to negotiate with them on a price. But, for the full experience, we recommend renting a bike and peddling your way there instead.

There's a few vendors that will rent you a bike in the little village. On the day we visited, the competition between the vendors was especially fierce, with the hawkers disparaging each other's bikes in their bid to get us to rent from them.

Without us needing to negotiate, this competition drove the price down to just SGD 5 ($3.62) per bike for a day rental. We opted to deposit SGD 10 ($7.23) to rent a bike lock to share — even though the bike vendor tried to convince us a lock wasn't needed since it was a slow day.

Although cell service is pretty good on the island, I'd recommend snapping a picture of the map to help you navigate around the park.

The first half of the road to the wetlands is a paved road not quite wide enough for two cars to pass each other.

There are a series of huts along the way for those looking for a place to rest in the shade or avoid a passing shower. We took advantage of one of these for a half-hour as a storm passed through.

When you get to the Kelichap Hut, the road transitions to being unpaved. However, it's not difficult to bike along.

About two miles from the ferry jetty, you'll reach the entrance of the wetlands park and a fairly large bicycle parking lot. The park is open from 8:30 a.m. to 6 p.m., but this shouldn't be much of a limitation as it mostly aligns with the ferry schedule.

Shortly after entering the main gates, you'll find an open-air information kiosk with vending machines. We didn't find drinking water fountains and the water in the bathrooms isn't potable, so you'll want to bring water or cash to buy drinks from the vending machines. From this point, you can go either way around the circular path to get out to the viewing platform.

Going clockwise will take you to a surprisingly tall tower that you can climb to get an elevated view over the forest, wetland and — yes — incoming flights. There are around 120 steps to the top of the 20-meter (66 foot) tower. For safety reasons, there's a limit on the number of visitors that can be on the tower at once, and you'll definitely feel some swaying when others are on it. So, anyone afraid of heights might want to skip this part.

Continuing around the mangrove boardwalk, you'll transition to an overwater section.

And it's out on this boardwalk that you'll find a shelter with a great view of incoming aircraft.

We clearly weren't the only visitors to the wetlands that came to watch planes. The shelter was popular with a number of visitors who — whether they came primarily for the planes or merely stumbled across this spot — stuck around to watch the impressive line of inbound aircraft from all over the world.

The boardwalk continues around the south of the wetlands, giving an interesting look at the coastal forest but not much of a view of the incoming aircraft due to the trees.

While it's not as close to the flight path, there's another boardwalk that extends back toward Changi from behind a historic building.

We found from our visit that the lineup of flights is rather spectacular midafternoon. Around 3 p.m. Singapore time, we experienced a streak of three Singapore Airlines Airbus A350-900 in a row followed by a Singapore Airlines Boeing 777-300ER and an Emirates 777-300ER:

The lineup continued over the next few hours with numerous A380 — including Emirates, Lufthansa and Qantas:

And, of course, there were plenty of Boeing 777:

The Chek Jawa boardwalk looks east toward the incoming aircraft. That means that the planes are going to be backlit in the morning. But as the sun descends in the west, the lighting gets increasingly better for snapping photos.

If you're looking to snap great photos, make sure that you bring appropriate equipment. My point-and-shoot Canon G7X — which has gotten pretty beat up from my travels — did alright, but a DSLR camera with a long lens would surely yield better shots.

As a final tip, let me remind you not to get too caught up watching the planes or exploring Pulau Ubin that you miss the last ferry back to Changi. If you stick around the wetlands through the 6 p.m. closing time, you'll want to make sure to head directly back to town to return your bike and catch the ferry back.

I'm always happy to learn about new AvGeek spots. If you have any recommendations, let me know in the comments below.

All photos by the author or his better half, Katie Genter.