How to spend 48 hours in Athens 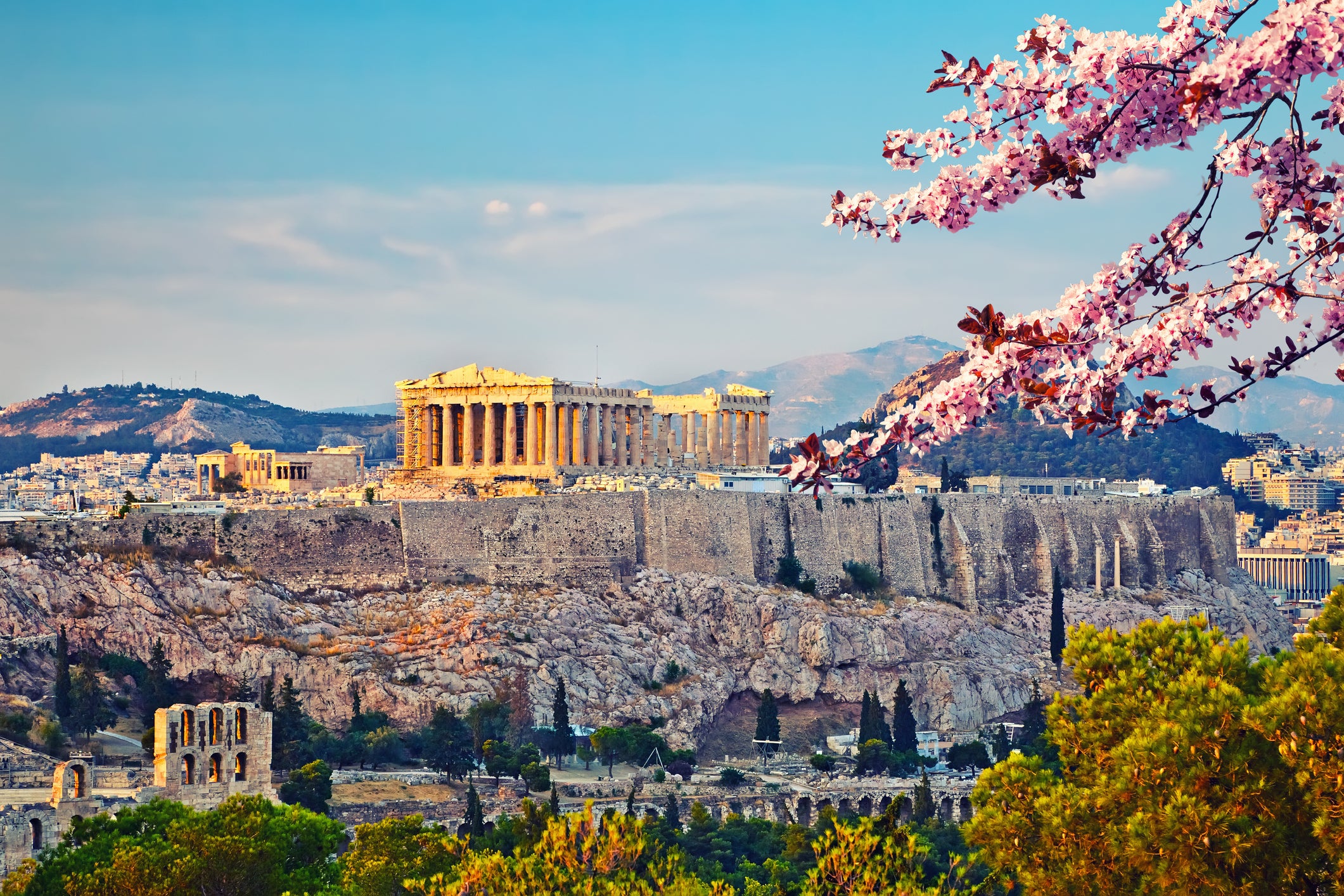 Between the sheer magnificence of the Acropolis, the vibrant colors of the Plaka quarter and the nonstop energy of Syntagma Square, it can almost seem like Athena and Zeus are conspiring to throw you a curveball: How can you possibly see everything there is to see in Athens in 48 hours? First of all, relax. While you’d have to be crazy to think you can manage more than 3,000 years of civic history in two days, you can still do a lot — and even have time leftover for sipping a frothy freddo cappuccino at a sunny cafe just like the Athenians do.

Day 1: Drinking in the Views

With 48 hours in Athens, chances are you will be spending at least a few of them tackling the Acropolis. So why not get an eyeful of this starring attraction before you even set out? Athens has a number of beautiful rooftop terraces from which to drink in views of the most iconic of the city's ancient monuments.

For a classic view of the Acropolis, head to the Hill of the Muses, or Filopappou Hill, which is steeped in history — and it’s quite beautiful, too. Follow the marble path from Dionysiou Areopagitou, skip the detour to Socrates’ prison and continue to the summit, where you’ll find the monument to Filopappos (a Greek prince during ancient Roman times) and sweeping views across southern Athens and the port of Piraeus. Another site, Areopagus Hill, is a rocky outcropping just northwest of the Acropolis that was the site of a criminal court in ancient Athens. But today, people come at all hours to Instagram the city’s most riveting lateral views of the Acropolis.

Arguably the best hotel rooftop terrace from which to enjoy Acropolis views is the new Coco-Mat Athens BC hotel. There's a beautiful pool there, too. At 360 Cocktail Bar, across from the busy Monastiraki metro station entrance, the close views of the Acropolis are something not to miss. And in the south of Athens, the views from the "lighthouse" terrace of the Stavros Niarchos Foundation Cultural Center are spectacular in every direction.

If the Acropolis is the most famous of Athens’ landmarks, the Parthenon (completed in 438 BC), which graces the peak, is its most emblematic. Because of the enormous cultural weight this place carries, you might want to give yourself some context before you make the nearly 500-foot climb, and the best place to do that is at the ultra modern Acropolis Museum, which is situated at the base of the hill. Inside you can peruse some 4,000 artifacts in five collections, including finds from the slopes of the Acropolis and antiquities from the Greek archaic and classical periods. Go for lunch (or even breakfast) at the bright museum restaurant and enjoy panoramic Acropolis views.

As you make your way up the Acropolis itself, the first structure you’ll see is the Propylea, the monumental gateway of the ancient religious complex. Also check out the Erechtheion, with its six stunning female Caryatid sculptures.

The afternoon is a good time to explore the ruins of the ancient Athenian agora, just northwest of the Acropolis (it’s an easy walk). It contains numerous sights, including the Museum of the Ancient Agora and superb Temple of Hephaestus. Admission to the Agora can be included with Acropolis admission or as a separate — and less expensive — ticket.

Alternatively, you might want to check out the more contemporary face of the city. Athens has one of the most vibrant street art scenes in Europe, and Alternative Athens offers excellent walking tours led by an actual street artist. Joining up with one of the tours is a great way to take pulse of cool, non-touristy neighborhoods like Metaxourgeio and Psirri.

In the evening, tuck into some contemporary, deconstructed-style Greek cuisine at insider-address tables like Juju at the iconic Divani Caravel Hotel. Or, focus on craft cocktails at acclaimed Athenian bars like the rooftop Galaxy bar at the Hilton or hot spots like The Clumsies.

Day 2: A Look Back in History

London has the British Museum, and Athens has the National Archaeological Museum. Give yourself plenty of time to navigate the thousands of artifacts at what is one of the greatest museums in the world. Highlights include the gold mask of Agamemnon, the bronze statue of Zeus, frescoes from Akrotiri (the Minoan ruins in Santorini said to be the original Atlantis), the Antikythera Mechanism — an ancient analogue “computer” retrieved from a famous shipwreck — and more richly painted ancient Greek vases than you can count.

After your visit is complete, head to Syntagma Square, which is home to the Greek Parliament and Monument to the Unknown Soldier. This is where you can see the iconic Evzones — elaborately attired presidential guards — who rotate positions on the hour.

In the afternoon, if you have any energy left, explore one or more of the city’s excellent smaller museums. One is the Museum of Cycladic Art. Technically located in the upscale Kolonaki district, it’s a five-minute walk from Syntagma Square and a veritable treasure chest of antiquities from the Greek islands, Cyprus, Mycenae and more. If, on the other hand, you want to see the coins that Socrates may once have used to buy Plato a drink, check out the nearby Numismatic Museum, housed in the former mansion of Heinrich Schliemann.

If you have a yen for urban exploration, instead of doing the museum circuit you can have a stroll around some of the Athenian neighborhoods that aren't too far from the center. But each has distinct appeal. Thissio and Petralona, which are west of the Acropolis, have lots of quirky restaurants and cafes, as does Pagrati to the east. Pagrati is also home to the all-marble Panathenaic Stadium, which the Greeks call Kallimarmaro.

At night, bar hop around the very central Monastiraki or Psirri neighborhoods or take the modern Athens metro to Kerameikos. When you exit the station, you’ll be in the heart of Gazi, which is the epicenter of Athenian night life. One glance around the large main square ringed with restaurants, cafes and bars, and you’ll get an instant refresher course on why cosmopolitan is a Greek word at heart. Almost anywhere you go here is going to be great, but do make time for a cocktail at the raucous Shamone (Elasidon 46) or dance the night away at Lohan Athens. Most bars in Gazi, like elsewhere in Athens, serve food, too.

Athens is a multifaceted global city with rich cultural treasures, a great foodie scene and energetic vibe. With your appetite whetted and plenty of flight options from Heathrow and Gatwick as well as Manchester with airlines like Star Alliance member Aegean, a 48-hour break well spent might just get you started on planning your return visit to the Greek capital.