A guide to the food and wine of the Azores

Articles
Devorah Lev-Tov is a contributing writer to TPG and TPG Family, as well as Travel + Leisure, Afar, Robb Report and The New York Times. She lives in Brooklyn with her husband and young son and travels everywhere from Bolivia to Hong Kong to Tel Aviv.
Follow
June 06, 2022
•
8 min read 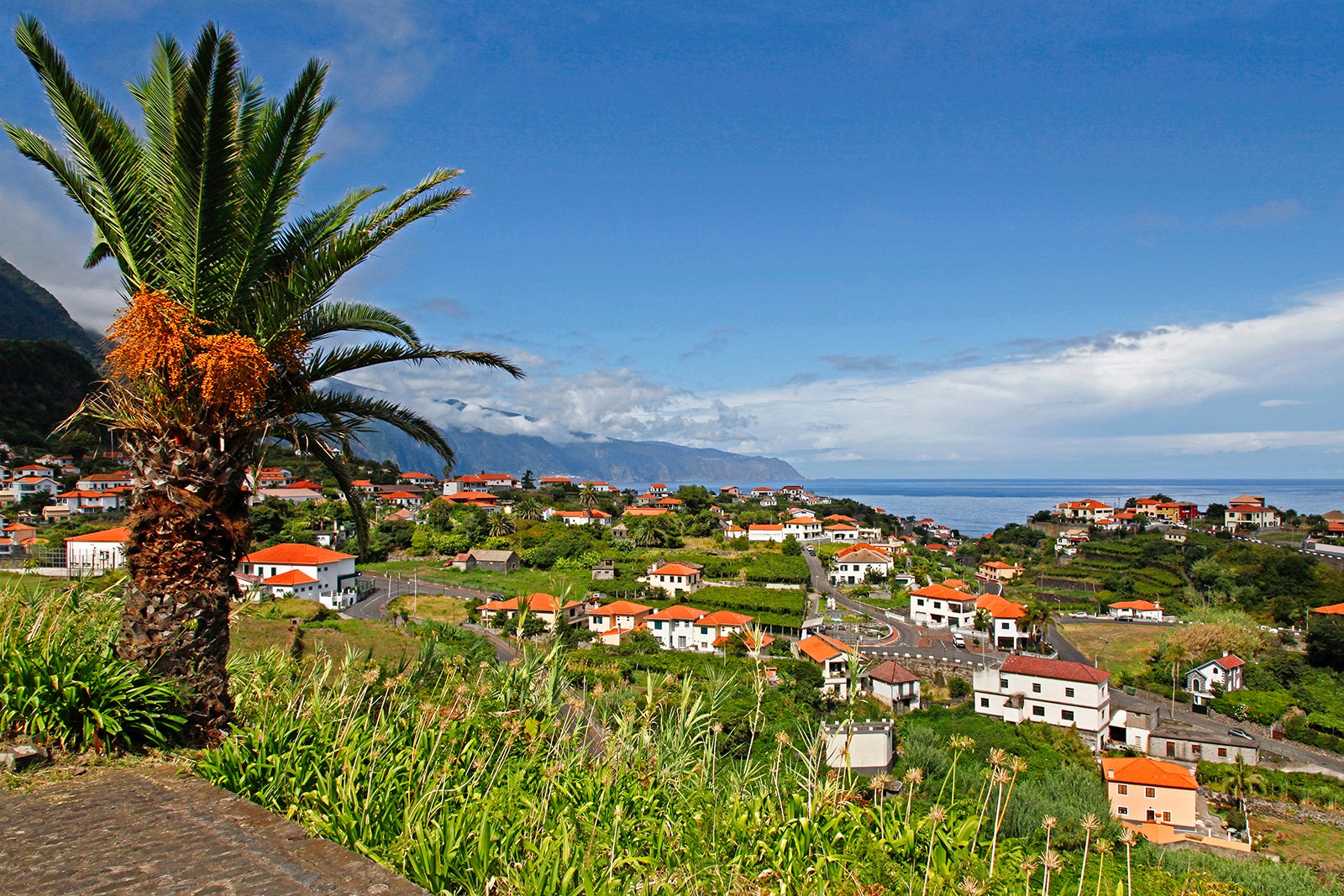 United Airlines recently inaugurated a direct flight from Newark International Airport (EWR) in the New York City area to Ponta Delgada, Sao Miguel — the capital city on the largest island of the Azores. The Azores are a lush Atlantic Ocean archipelago made up of nine volcanic islands that have belonged to Portugal since the 15th century.

The Azores boast a unique food culture, with several distinctive items grown and produced there. They're known for their exceptional dairy, thanks to their “happy cows” (as locals will proudly tell you) that you will see grazing on the vivid green grass all year long.

In addition to dairy, the islands are also famous for producing wine. They're also able to grow tea and pineapples — the only place in Europe where this is possible on a commercial scale.

Azorean cuisine is so unique because the island was mostly on its own for several centuries. There are several signature dishes you’ll find on a visit there, distinctive even from mainland Portugal. Here’s a food and drink guide to the Azores, to help you decide what to eat and imbibe while you’re there.

Related: 10 all-inclusive resorts in Europe for winter sun and snow

The Azores produce more than 50% of Portugal’s cheese, even though it only makes up 3% of its land mass. Each of the nine islands has made grass-fed cow’s milk cheese for centuries; cheeses are named for the island on which they’re produced.

Because of the unique topography and climate of the islands, many of the cheeses have Protected Geographical Status (DOP) certification. The most ubiquitous is Queijo Sao Jorge, named for the small island of Sao Jorge where it’s produced. A semi-hard raw cow’s milk cheese, it has a spicy and a nutty flavor, with a buttery core.

Other cheeses include the semi-soft Queijo Vaquinha, which is produced on the island of Terceira, as well as Quiejo de Sao Miguel, made on the island of Sao Miguel and aged for a minimum of nine months. It is a hard cow’s milk cheese that’s encased in a black wax rind.

A newer cheese, Quiejo de Vale is a sour cow’s milk cheese made exclusively in a small, family-run factory. It was created when the family's 17-year-old daughter had the idea to use the sour water from a nearby spring in Furnas (also on Sao Miguel) as a brine.

You’ll see Azorean cheeses in markets and on restaurant cheese boards across the islands. If you’re on Sao Miguel, head to O Rei Dos Queijos inside the Mercado Da Graca, the covered farmers market in Ponta Delgada. You can sample them all here.

Related: Everything you need to know about bringing cheese back from vacation

Azorean wine is special because of the way the grapes are grown. Also, all the islands produce their own wine. The wine region on Pico was named a UNESCO World Heritage Site in 2004. Some of the best Azorean wines are found here.

Instead of the typical European trellises, the vines in the Azores run along the ground on top of volcanic rocks, which retain heat. You’ll see them relegated to inside black stone walls that surround square-shaped land plots. More than 30 varietals of white and red wine grapes are grown in the Azores, including Verdelho, Cabernet Sauvignon, Merlot and Arinto dos Azores.

To see how Azorean grapes are grown and wine is made, visit wineries like Cooperativa Vitivinicola Da Ilha Do Pico on Pico, Adega Simas (adega means “wine cellar” in Portuguese) on Terceira, and Quinta da Jardinete Vineyard on Sao Miguel. When dining out, explore the wine list for bottles from across the archipelago.

Related: Winc: Ordering wine is helping me earn airline elite status, but is it worth it?

Azoreans also use some of their happy cows for beef, and stews are a favorite vehicle. The town of Furnas, home to the most active volcano, is known for its hot springs. You’ll see bubbling underground cauldrons, as well as spigots and springs spouting water with various mineral make-ups.

Locals make a stew made called cozido. It's made with beef, Azorean wine and vegetables, then buried underground, usually in the volcanic sand surrounding Furnas Lake. There, it cooks via volcanic steam for at least six hours. (If you visit, you’ll notice a roped-off area where dozens of buried pots bubble in underground pits.)

Sample the dish at the Terra Nostra restaurant, which is also home to a lovely garden with hot springs you can swim in.

On the island of Terceira, Alcatra is the famous wine-braised beef stew, made from local beef and white wine. Tender chunks of bone-in beef are mixed with onions, bacon, white wine, allspice, black peppercorns and cinnamon.

The ingredients are cooked for at least six hours in a massive, unglazed clay pot that absorbs the flavors so each use adds to the seasoning. Visitors to Terceria can try Alcatra at several traditional restaurants, including Ti Choa or Sabores do Chef.

Related: 11 things to see and do when you visit the Azores

Since the Azores are islands, it’s not surprising that seafood and fish feature heavily in the cuisine here. Cod, tuna, grouper, lobster, octopus and even limpets are popular. What’s a limpet? It's a small shellfish similar to a clam or sea snail, and it's full of flavor.

You’ll often see them served raw, but if that’s not your thing, many menus across the islands feature them grilled (lapas grelhadas). The grilled version is typically bathed in an addictive garlicky butter that complements the briny shellfish perfectly, and served with a spicy red pepper sauce.

You’ll see traditional Portuguese pastries in the Azores, but many are unique to the Azores and aren't found anywhere else. Like the cheese and wine, many of the islands have a signature pastry.

One of the most famous is Terceira’s Dona Amelia cake. It's a chewy pastry made with spices like cinnamon, which came to the island via Portuguese ships laden with spices from India and the Far East. The pastry was supposedly created to honor the visit of Portugal’s Queen Amelia and King Carlos in 1901.

Other favorite Azorean pastries include Sao Miguels Queijadas da Vila, and the star-shaped Queijadas da Graciosa, from the island of Graciosa. If you’re on Terceira, stop by the famous O Forno bakery in Angra do Heroismo, to try the Dona Amelia and other pastries.

While on the island of Sao Miguel, you might see bolo levedo, which originally come from the town of Furnas. These are fluffy, slightly sweet Portuguese-style muffins. Locals eat them with sweet and savory fillings such as jam, cheese and even hamburger.

Because the Azores have a unique microclimate, tropical fruits that aren’t grown anywhere else in Europe flourish here. Pineapples bananas, guava, cherimoyas and passion fruit are sold at the markets. You can also visit a pineapple plantation on Sao Miguel. The island of Santa Maria, which is hotter and drier than the others, is famous for its melons, called meloa, that are similar to cantaloupes.

The Azores is the only place in Europe with commercial tea plantations. The two oldest plantations are on Sao Miguel and both are open to visitors. Cha Gorreana and Cha Porto Formoso offer factory tours, where you can see the tea growing in fields. Visitors can also sample their signature orange pekoe and green tea varieties (which make a great gift or souvenir).

The Azores might be better known for wine, but the islands also produce another kind of booze: potent liqueurs distilled from lemon, tangerine, blackberries, fennel, passion fruit, pineapple and other fruits. Adega Simas on Terceira is the charming home and winery of Paulo Simas and his family. After sampling some wine, don’t be afraid to request some of his homemade liqueur — he’s happy to share!

Featured image by ullstein bild via Getty Images
Editorial disclaimer: Opinions expressed here are the author’s alone, not those of any bank, credit card issuer, airline or hotel chain, and have not been reviewed, approved or otherwise endorsed by any of these entities.