This $6,000-a-night fairytale hotel suite ruined budget travel for me

Articles
Ashley Kosciolek has spent more than a decade writing about travel, with particular emphasis on cruises. Her favorite cities include London; Amsterdam; Krakow, Poland; Phnom Penh, Cambodia; Dawson City, Yukon; and anywhere known for outstanding pizza and theater. You can follow her daily exploits, both at sea and on land, on Instagram or Twitter @slyjabroni.
Follow
Nov. 25, 2022
•
9 min read 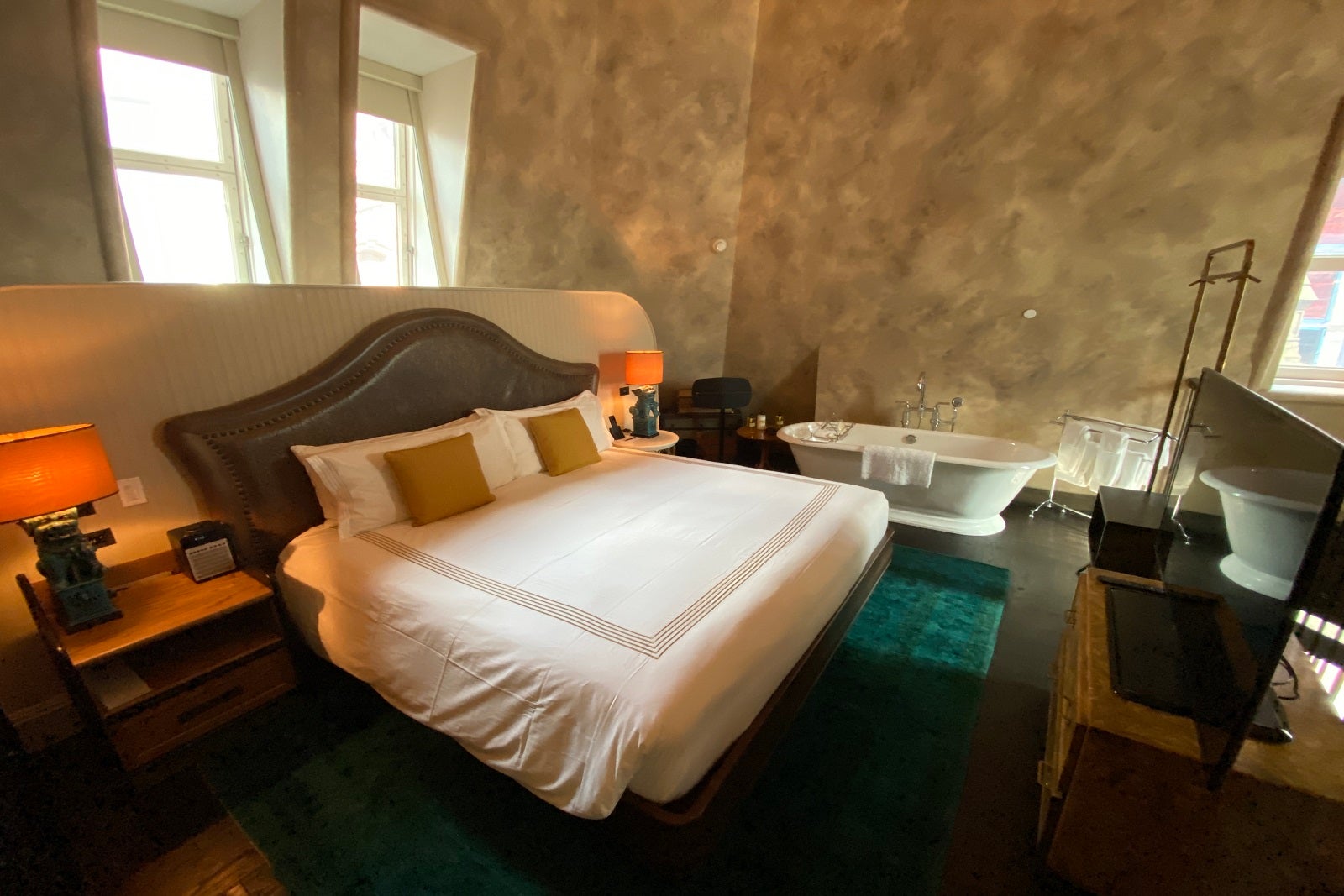 The Beekman hosted TPG's Ashley Kosciolek for a one-night stay. The opinions expressed below are entirely hers and weren't subject to review by the hotel.

I'm usually a budget traveler because, historically, I had to be if I wanted to see the world.

Until recently, I didn't understand the allure of high-end accommodations and scoffed at people who paid thousands a night for hotel rooms. "Why would anyone spend that?" I wondered, rationalizing my frugality with the thought that, for one night's stay at some luxury properties, I could fund an entire weeklong vacation.

Frankly, I didn't know what I was missing. Cue The Beekman, a Thompson Hotel, in Manhattan's Financial District. (Thompson Hotels are part of World of Hyatt's footprint.)

The property, built in the late 1800s — at the same time as the Brooklyn Bridge — charges from $6,000 a night for a stay in its rooftop Turret Penthouse East and Turret Penthouse West suites. I had the pleasure of spending 20 hours in one of them.

The experience set the bar so high that it'll be difficult to go back to my penny-pinching ways. Here's what makes The Beekman's penthouses so spectacular.

The building, at 123 Nassau St. in New York, was completed in 1883. Back then, it was Clinton Hall, which housed the Mercantile Library Association. It featured several libraries and writing rooms that Edgar Allen Poe frequented. It was also the site of some of New York University's first classes.

It changed hands many times over the last 130 years or so, but it opened as The Beekman in 2016. Many of its original elements — like the stunning historic atrium and much of the original tile surrounding it — were painstakingly preserved.

For spots where the tile was too deteriorated, The Beekman tracked down the family-owned company that originally produced the tile and convinced it to make replacements. To protect the tile in high-trafficked areas, the hotel also commissioned custom carpeting that looks exactly like the tile pattern underneath it.

In addition to its 287 rooms — 38 of which are suites, including the turrets — The Beekman offers three restaurants, as well as a basement nightclub that was still under construction while I was there.

The Bar Room and Temple Court by chef Tom Colicchio take up most of the ground-floor real estate.

The former forms the base of the breathtaking atrium, and it's open all day for food and drinks with a decidedly writerly and speakeasy ambiance. (Think dark colors, bookshelves, fringy lamps and artwork bearing Poe's likeness.)

The latter, a fancier five-course affair, is located just off The Bar Room and opens only for dinner each night. Finally, chef Daniel Boulud's Le Gratin is a French bistro-style restaurant that features Lyon-inspired cuisine.

The Turret Penthouse rooms, which are mirror images of one another, are basically small apartments (albeit larger than many residences you'd find in New York) built on top of The Beekman. Originally designed as office spaces, they have since been converted into comfortable and well-appointed two-story loft suites with amazing amenities.

After checking in, a bellman will take your bags and escort you to the first of two elevators. When you reach the ninth floor, you'll access a second one that takes you up one additional story for keycard access to the private entrance to the Turret Penthouses.

I stayed in the west wing. If that wasn't enough to give me serious "Beauty and the Beast" vibes, the covered terrace that leads to the suite is something straight out of a fairytale, complete with faux wisteria and plenty of seating (often used for gatherings like weddings or showers).

Once inside, you're met with a serious "Sleep No More" ambiance — dark colors that ooze early 20th-century decadence. There's a slight intrigue about it all, from the mismatched rugs and furniture to the bright white bath-and-a-half that can be found on the first floor in stark contrast to the rest of the dimly lit space.

If one terrace wasn't enough, you can escape through a side door onto an outdoor patio that provides city views and plenty of seating in case you and a few friends care to raid the suite's well-stocked mini-bar. There's also room service, with some fantastic small-plate options for entertaining.

The two turret suites share the outdoor space, so when both rooms are occupied, a large wall of fake flowers is added to split it down the middle and provide some privacy. The area can also be opened up for weddings and other events if the hosts book both suites.

The loft area on the suite's second floor will also drop your jaw. In addition to a huge (and super-comfortable) king bed, there's a large TV, a stand-alone bathtub (yes, I did take a bubble bath) and the actual turret, from which hangs one of the grandest and most sparkly chandeliers I've ever seen.

Although the actual structure was built in the 1800s and is furnished to look like something from the 1920s or '30s, modern luxury touches abound. (I loved the heated floor in the bathroom.)

Although the technology was seamlessly integrated with the aesthetic, some of it proved a bit too much for me. The electric window shades were difficult to master at first; some light switches seemed to control nothing at all; the downstairs TV's Chromecast wouldn't connect; and at one point, unprompted, the in-room speakers began playing music that took me 10 minutes to figure out how to turn off.

However, the sheer over-the-top nature of the space, the efficiency of the staff, the deliciousness of the room service items I ordered and the stunning terrace spaces left me feeling like an absolute princess. Also, I slept like a rock and had one of the best bubble baths ever the following morning. (I was even able to secure a 1 p.m. late checkout.)

What this means for my travel habits

After staying in one of the Turret Penthouses, I admit I'm going to have trouble going back to the less swanky hotel rooms that my budget permits.

Unfortunately, this suite at The Beekman can't be booked on points, but other rooms and suites are available. In a spot-check of December dates, we saw standard king and queen rooms for 29,000 points, a standard one-bedroom suite for 44,000 points and a premium one-bedroom corner suite going for 58,000 points. Top-tier World of Hyatt elites, Globalists, are eligible for standard suite upgrades, depending on availability.

As much as I hate to admit it, I might have been pulled over to the dark side and will likely begin setting my sights on another splurge-worthy stay, location to be determined.

Want more? Check out these stories: