6 Things Even Repeat Travelers Need to Know Before Visiting Barcelona 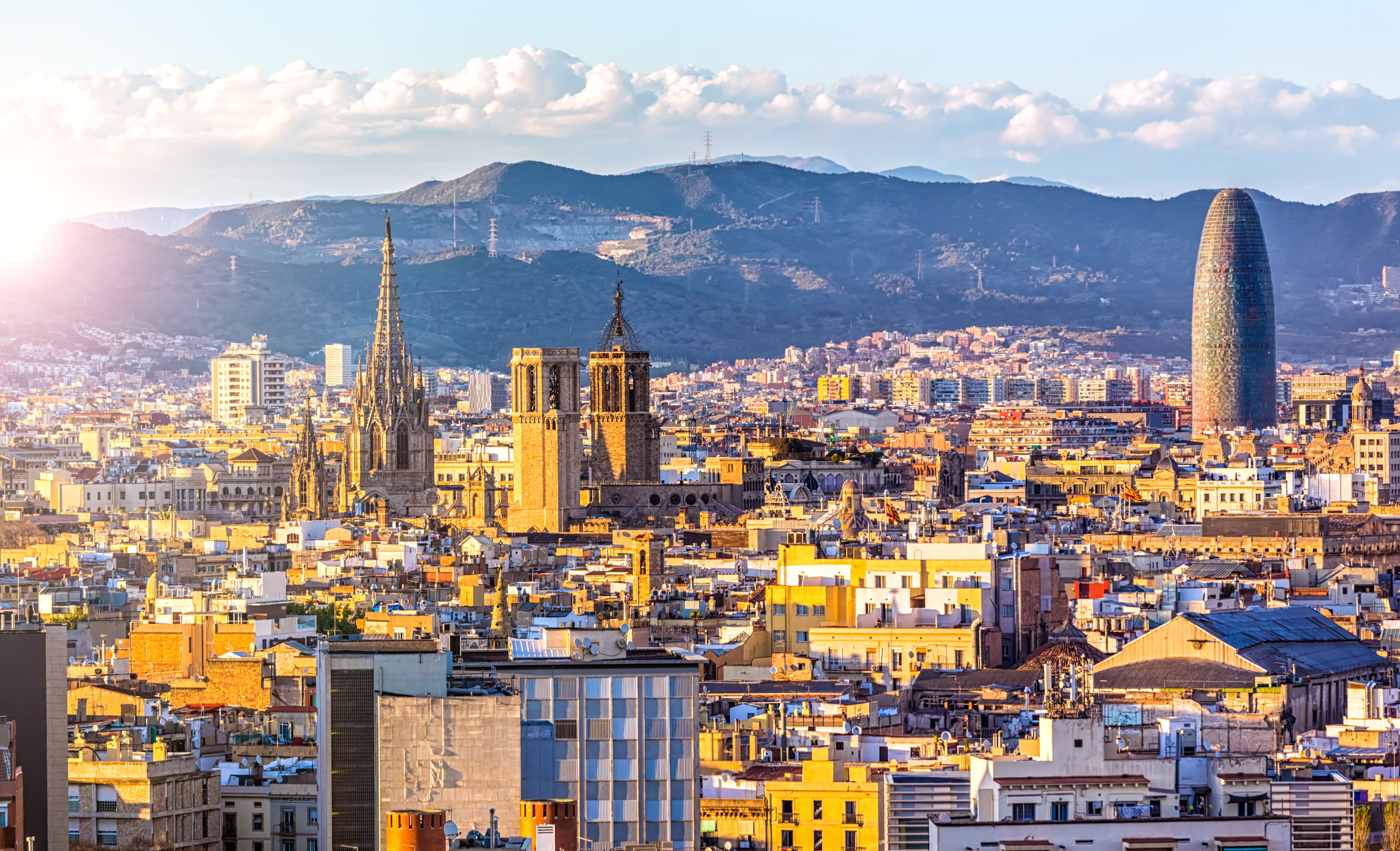 If you haven't been to Barcelona yet, you're probably going to want to book a flight there after reading this. If you have been, you know it's a beautiful city filled with amazing people, culture and food. Regardless of which camp you fall in, these are the six things you should know before your next trip.

If you've seen pictures of Barcelona, no doubt you've seen the long stretch of beach that leads up to the iconic W Hotel, known locally as "La Vela." This area is called Barceloneta and is one of the busiest tourist spots; the beach gets very crowded at times. Don't get me wrong — if it's your first time in the city, you should definitely see it. There are dozens of chiringuitos (little beach bars and restaurants) along the length of the beach that vary from cheap(ish) tapas and sangria to fancier seafood places with set menus, such as Can Majó, that you might go to for a nice dinner in the evening.

But the beaches get gradually nicer the farther you walk away from the city. The other main beaches in the city are Platja de la Nova Icaría, which is still pretty touristy; Platja del Bogatell, which is great for beach volleyball; and Platja de la Mar Bella, which is the city's gay beach — part naturist, part not.

For slightly more picturesque and tranquil vibes, you can catch a train to Montgat Nord on Line R1 from Plaça Catalunya. This beach is quite small but since it's used mainly by locals, it's usually pretty quiet during weekday working hours. There are still a couple of chiringuitos and, again, they're a lot quieter than what you'll find at the beaches in the city.

There is also a beach perfect for the AvGeeks. Playa del Prat de Llobregat runs alongside Barcelona-El Prat Josep Tarradellas Airport (BCN) and gives you spectacular views of the planes.

2. There Is Another, Better Rambla

Barcelona's famous tree-lined La Rambla is actually made up of a series of smaller Ramblas: Rambla de Canaletes, Rambla dels Estudis, Rambla de Sant Josep, Rambla dels Caputxins and Rambla de Santa Mònica. It starts in the center of the city at Plaça Catalunya and makes its way down to the marina.

This street gets very busy with tourists and, as a result, has become a target for pick-pockets, illegal street vendors and over-priced restaurants.

A little farther along the coast and still within the city is a neighborhood called Poblenou. Its Rambla del Poblenou is the heart and soul of the area and is lined from start to finish with bars and restaurants. The best thing about it is that there is barely a tourist in sight — it's a real local hangout. The food is great, too, and cheaper than on the Ramblas in the center of town.

It's also very easy to find. You can either take Line 1 on the Metro to Glòries and walk a few streets along the Avinguda Diagonal until the start of the Ramblas. If you're at the beach already, walk to the far end of Platja del Bogatell then cut through the Parc del Poblenou and you'll soon find the bottom of the Rambla.

3. You Need to Try These Restaurants

Barcelona has more restaurants than you could possibly fit into a quick trip. My recommendations are always places that locals like to go, whether they're completely tourist-free or have a good balance of the two. From ultra fancy to casual post-beach spots, these are TK of my favorite places in Barcelona to eat.

Head to L'Olivera for real, authentic Catalan cuisine. The tapas arrive fast and are as good as they get. The restaurant is so traditional it doesn't even have a website.

Can Majó is a stunning seafood restaurant where you can dine outside on the terrace just a few yards away from the beach. The menus range from about $50 to $80 and include a starter, main, dessert, bread, wine, water and coffee.

For the best brunch in Barcelona, there's Él Arbol, where the experience is much more friendly and authentic than some of the "hot on Instragram" brunch spots that it competes with nearby. The food is tasty and the combinations are quite unexpected. Bad coffee is rare in Barcelona (unless you go to a chain), and this place is no exception.

Dinner With a View

If you love Mediterranean cuisine, you absolutely must make a reservation at 1881 Per Sagardi. The food is on the pricier side, but it's amazing. Not only that, but the restaurant is located atop the Catalonian History Museum and offers spectacular views over the waterfront. This is a great place for a special occasion or to just treat yourself.

Lateral is a small Spanish chain with restaurants in both Barcelona and Madrid. As well as being stylish and trendy, it prides itself on incorporating culinary themes and styles from across the globe for dishes that still have a distinct, Spanish twist. The restaurant isn't cheap, but it doesn't break the bank, either.

Carabella is perfect for after-beach snacks and drinks, and is a great place to meet friends before heading out for the evening. The cocktails are divine and you'll want to order tacos at least two (or three) times. This is a place to eat, drink and be social.

4. Try Nordés — And These Great Bars

Barcelona has no shortage of bars. Many bars and clubs close to the beach are overpriced tourist traps, which are really not authentic Catalan bar experiences. But there are some great ones. Also, if you're a gin fan, make sure you track down a Galician gin called Nordés — if it's served right, it will come garnished with frozen grapes.

No Sé has been called the best in Barcelona, so make sure you don't miss it. It's quite small, but serves up some of the tastiest and most original cocktails. Despite how busy this place gets, the staff are great. You can have a good time here any night of the week. Head to the El Raval area of the city, which is a slightly less touristy than either El Born or the Gothic Quarter, for Bar 33/45. This is a great place to go for a couple of drinks after dinner or before you head to a club. It's a small place but doesn't feel that way, since the front opens out onto the street. Finally, Dr. Stravinsky is a one-of-a-kind cocktail experience that will take you on a journey. Every single cocktail is a work of art. It's more like a theatrical performance that will have you entertained until your last magical sip.

Waiters in Barcelona are usually have a decent salary and are not on the hourly rate more common in the US and UK. This means that going over and above to provide excellent service isn't as important for them as they don't rely on tips to make up for a poor wage. Even if they wanted to wow you with their service, they probably won't have the time, as restaurants tend to be very understaffed.

Barcelona is in one of the most beautiful regions of Spain, Catalunya. It has mountains and beaches and everything in between. If you're up for an adventure, escape the city and consider a day trip, or even an overnighter, to one of these destinations.

Tarragona is just over an hour's train journey from Barcelona, so there's no need to hire a car. The main feature is the walled old town with tiny cobblestone streets and quirky shops and restaurants. There's also has an impressive amphitheater dating back to the second century with spectacular views over the Mediterranean. Unlike Barcelona's beaches, these are natural and a lot quieter. L'Arrabassada, La Savinosa and Cala Romana are the three I would recommend if you need some relaxation after wandering around the city's old town.

Sitges is a lot closer to Barcelona than Tarragona, but still takes around an hour to reach on the local commuter train. The town is most famous for being one of the most LGBTQI+ friendly places in the world. It hosts a huge pride parade every year and has a vibrant bar and club scene centered around la Plaça Indústria, only a couple of streets back from the beach. The beaches here are natural, and much more picturesque than the most popular ones in Barcelona.

Starting in Blanes, around 40 miles north of Barcelona, and stretching all the way to the French border, the Costa Brava is one of the most stunning coast lines I've ever seen. At just under two hours away from Barcelona by car, Calella de Palafruguell is a magical little escape from it all. Its rocky inlets and tiny beaches are awash with crystal clear water.

The town itself is very small and hilly. The best thing to do is find a place to park and wander, as there are dozens of restaurants along the coastline that usually have beautiful views of the Mediterranean. Here, the seafood is super fresh, tasty and a great value for your money.

And in Cadaqués, the buildings are nearly all whitewashed, giving the town an almost Greek Island-feel. Meander around the coast and clamber down rocks to deserted beaches. Despite this place being quite a popular tourist destination, particularly with the French, it never feels too overcrowded.