Articles
Harriet Baskas is an award-winning journalist and the author of eight books. She writes, most often, about airports, air travel, unusual museums, and odd adventures for a variety of outlets, including her blog, StuckatTheAirport.com.
May 01, 2022
•
7 min read 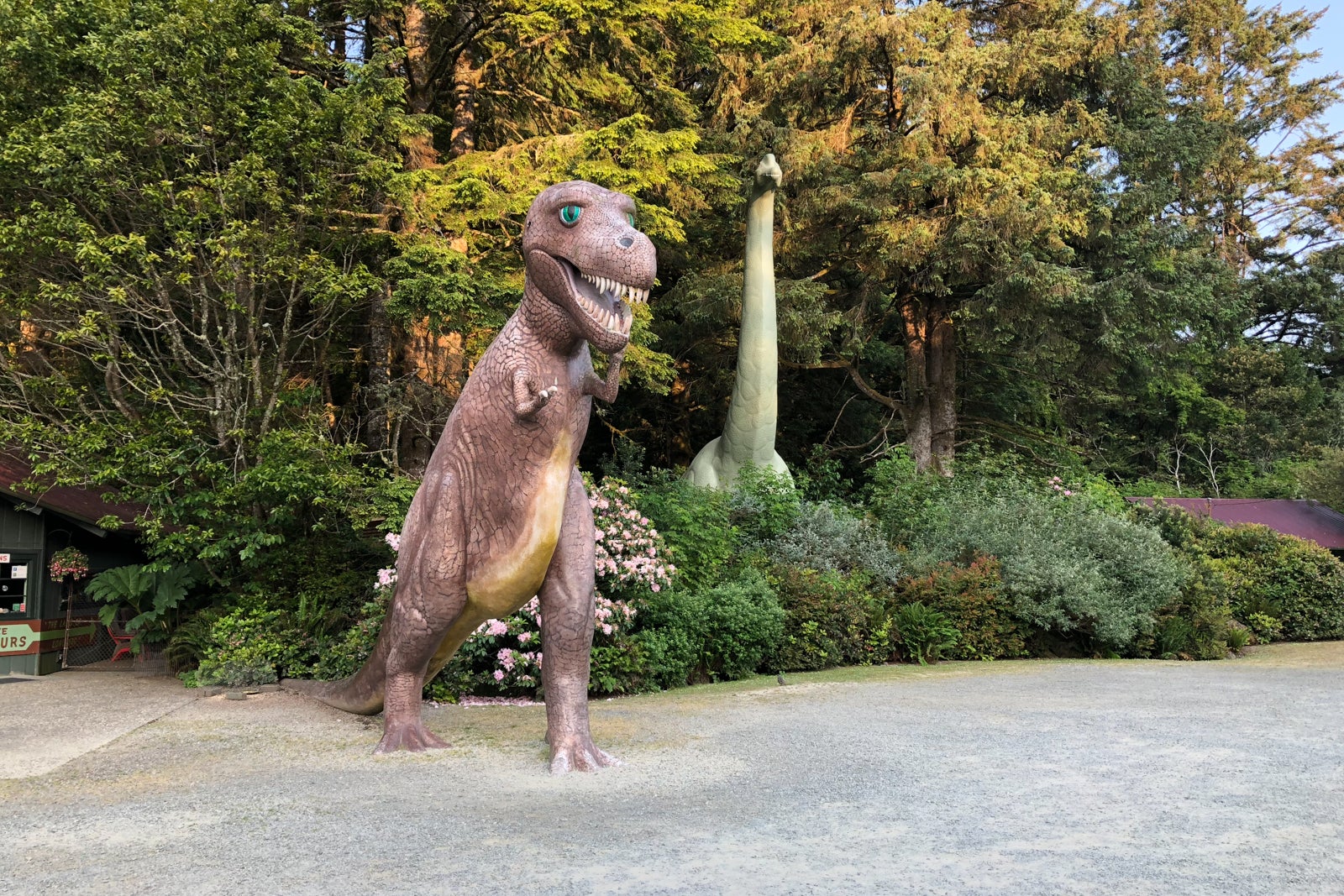 While they may be extinct in the real world, dinosaurs will roar back to life this summer in movie theaters nationwide with the much-anticipated June 10 release of Jurassic World Dominion, which promises “never-seen dinosaurs, breakneck action and astonishing new visual effects.”

The latest installment of the long-running blockbuster Jurassic film franchise will not only draw moviegoers into theaters to see scary computer-generated dinosaurs but also may inspire travelers to hit the road in search of places that document a time when real dinosaurs roamed the earth.

They won’t have to go far. The Jurassic Quest touring attraction has stops from now through October in more than two dozen U.S. cities, and from museums, science centers and archaeological sites to roadside attractions and state and national parks, there are hundreds of U.S. destinations to please modern-day dinosaur hunters. We’ve picked a handful that, strung together, could make a great Dino-themed cross-country road trip.

A good place to begin a dinosaur-themed road trip is in New York City, home to the American Museum of Natural History and the world’s largest collection of dinosaur fossils.

Head to the fourth floor to see about 100 specimens. Most (85%) of them are real fossils and organized to follow the evolutionary tree of dinosaurs. The collection includes everything from fossilized dinosaur eggs and footprints to a duck-billed dinosaur mummy, a 65-million-year-old Triceratops and an Apatosaurus. The collection also boasts a Tyrannosaurus rex which has been on display in the museum for more than 100 years.

In Washington, D.C., you can roam among dinosaurs at the Smithsonian National Museum of Natural History, which reopened its dinosaur and fossil hall in 2019 after a four-year, $125 million renovation. Now, the remounted and reposed dinosaurs in the David H. Koch Hall of Fossils – Deep Time are the stars of a 31,000-square-foot exhibition.

It includes many interactive and touchable exhibits. It also features more than 700 fossil specimens, including a Allosaurs crouching over a nest of eggs, a Stegosaurus standing over a Ceratosaurus and a T. rex skeleton posed attacking a Triceratops.

“Dinosaurs are loved by visitors of all ages,” says Donna Tuggle, the museum’s chief of learning venues and visitor experience. “To hear the gasps and see the looks of wonder on our youngest visitors when they first see the T. rex is a moment you never forget.”

If you have any doubts that dinosaurs are a big deal at the Children’s Museum of Indianapolis, just look at the building, which has huge dinosaurs peeking in and busting out. Inside, follow the dino tracks in the immersive Giants of Jurassic exhibit, which puts visitors (safely) between a pair of sauropods each stretching out some 70 feet from nose to tail.

“Quite often families visit the museum and are amazed they can touch real fossils and talk to real paleontologists who dug them up and learn what those fossils and teeth marks on the bones reveal,” says Jennifer Pace Robinson, president and CEO of The Children’s Museum of Indianapolis.

Field Museum visitors encounter Maximó the Titanosaur in the main hall and more than a dozen other dinosaurs in the Elizabeth Morse Genius Hall of Dinosaurs, where they are part of the Evolving Planet exhibition. A temporary exhibition, Jurassic Oceans: Monsters of the Deep, running through Sept. 5, features real fossils of several sea creatures that appear in the movie.

There’s also SUE, the largest and most complete T. rex specimen ever discovered. A media experience recreates South Dakota, where the fossil was found, 67 million years ago and sensing stations let visitors experience how this dinosaur likely sounded, how its skin felt and even how its breath smelled.

Dip down to Texas to visit Dinosaur Valley State Park, in Glen Rose, southwest of Dallas. Here, there are guided and self-guided hikes to see the saucer-shaped footprints of sauropods and the three-toed tracks of theropods made 113 million years ago.

In downtown Dallas, the Perot Museum of Nature and Science has a Paleo Lab inside the T. Boone Pickens Life Then and Now Hall. Under the watchful eye of the only full-body reconstruction of Nanuqsaurus hoglundi in the world, visitors can observe paleontologists and preparators processing fossils fresh from the field.

The hall is also home to giant T. rex and Alamosaurus skeletons; a Tenontosaurus (the first mounted skeleton in Texas); and a Tylosaurus (discovered by a kid). It also features a new species of the ceratopsid dinosaur Pachyrhinosaurus, which was discovered by the Perot Museum’s chief curator and named Pachyrhinosaurus perotorum in honor of the Perot family.

Dinosaur Park, a free, quirky dino-themed tourist attraction dating back to 1936, sits on a ridge of sandstone in Rapid City, South Dakota. In addition to stunning views of the South Dakota Black Hills, the park is filled with giant painted concrete and steel dinosaur statues. Visitors can take selfies with an 80-foot-long Apatosaurus, a T. rex, a three-horned Triceratops (the South Dakota state fossil), a Stegosaurus and other long-extinct creatures. There's also a park gift shop.

Between 1909 and 1923, paleontologists from Pittsburgh’s Carnegie Museum of Natural History harvested more than 700,000 tons of dinosaur skeletons and fossils from what is now Dinosaur National Monument, a National Park Service site on the Colorado/Utah border. Specimens from this fossil quarry are featured in dinosaur exhibits at many major North American museums, but there are plenty still left to see.

The park itself is more than 200,000 acres. Visitors can spot more than 1,500 partially excavated fossils from dinosaur species such as Allosaurus, Apatosaurus, Diplodocus, Stegosaurus and others on a wall inside the Quarry Exhibit Hall, near Jensen, Utah. The indoor museum allows visitors to touch some fossils that are millions of years old. It also includes an 80-foot-long dinosaur mural, as well as a mounted cast of an Allosaurus fragilis — and its real skull.

This kitschy and classic roadside attraction dates back the mid-1950s. The family-owned Prehistoric Gardens offers a self-guided tour through an Oregon rainforest populated by 23 homemade dinosaur statues. They range from a flying Pteranadon with a wingspan of 27 feet to a 46-foot-tall Brachiosaurus that's 86 feet long. Park creator Ernie Nelson strove to make his dinosaur sculptures scientifically correct, but he took liberties with the paint colors, adding bright markings to make his creations fun and photogenic.