7 Cruises Worth Taking That Aren't in the Caribbean 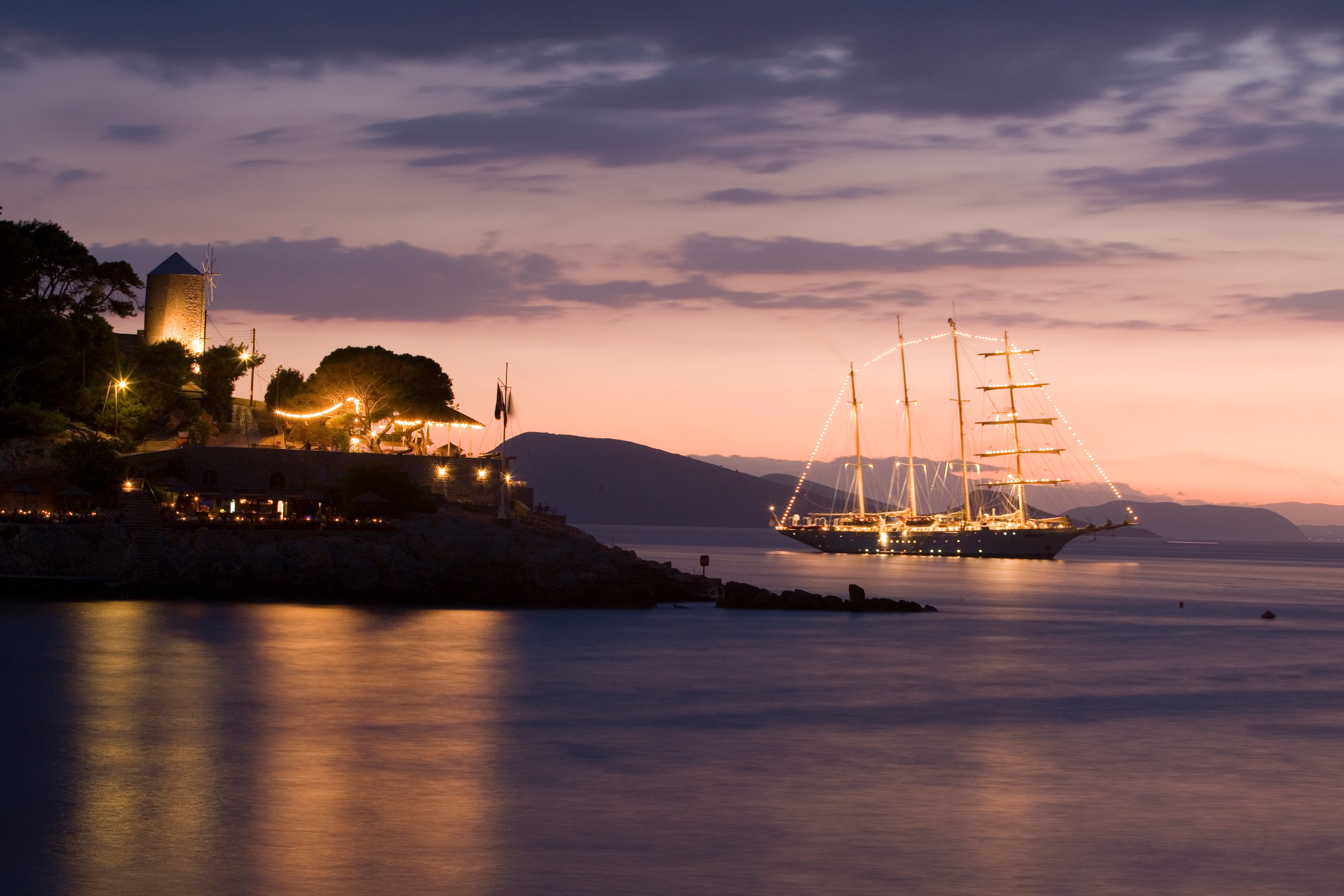 Cruising the Caribbean offers the opportunity to splash in the turquoise sea, snorkel with starfish and stingrays, and drink endless frozen libations on the beach. But there are a slew of unique, non-Caribbean cruises for the adventurous traveler. You can sail on a wooden schooner through the Greek Isles, wind down on wine-centric itineraries, tour European Christmas markets by boat, and even learn the art of egg cookery on your way to an island in French Polynesia.

Here are seven cruises to consider that aren’t in the Caribbean, plus tips for how to find deals when booking.

Star Flyer, a 360-foot, four-masted schooner designed after a classic ship that sailed spice routes in the 19th century, visits some of the most beautiful islands of the northern Cyclades. Mykonos is the most populous stop, but the lesser-known islands are the real draw. The route starts and ends in Athens, giving guests time to explore sites like the Acropolis and Pantheon, but most days are spent sailing to picturesque islands such as Amorgos, with its cool Hamptons beach vibe, or Patmos, a small French Riviera-like island with beautiful boutiques, Greek bakeries, local jewelry designers and vibrant food.

The boat’s rooms are no-frills but the small, circular windows allow guests to see (and hear) the sea splashing against the glass. Mornings are best spent watching sunrise while approaching a picturesque island and afternoons are for exploring and sunbathing in the bow net over the wide-open sea — and then waiting for sundown, when you watch the fiery sun melt into the horizon with an Aperol spritz in hand.

Star Clippers offers an array of deals on itineraries, from free hotel nights pre-and post-cruising, to discounted airfare and no supplement charge for solo travelers. Deals are listed on the specials page, so check often.

Bora Bora is one of the great island destinations in the world, but there’s a lot more to French Polynesia. Oceania offers a 10-day voyage on the Regatta, starting and ending in Pape'ete and sailing to Moorea, Fakarava, Rangiroa, Nuku Hiva, Bora Bora and Raiatea. You get to island-hop around French Polynesia without a lot of planning. Snorkel with stingrays and aquatic life in the turquoise waters of Fakarava (population, less than 1,000). Eat traditional sea snacks and pig cooked underground with volcanic stones on Nuku Hiva — an island in the Marquesas that Herman Melville wrote about often.

There’s never a shortage of activities on the islands, but the ship itself has standout amenities. Book a luxurious spa treatment at the Canyon Ranch Spa and indulge in the spa’s roof deck with lounge chairs or get lost in a book for the day. Or, take a cooking class at the ship’s state-of-the-art cooking school. From a comprehensive knife-skills class to a fish-cookery class and even a brunch class on how to perfectly execute eggs, sailing days are never a snore. If hunger strikes, there are lots of restaurant choices on board, all overseen by celebrated chef Jacques Pépin.

Oceania has flash sales and deals throughout the year on the Special Offers page. And if you’re sailing solo, there’s a special reduced single supplement of 50% on select suites.

A journey down the Mekong River, from Siem Reap, Cambodia to bustling Ho Chi Minh City, Vietnam, is a river cruise unlike any other. With an emphasis on exploring local culture, daily treks include seeing sunrise at Angkor Wat, praying with Buddhist monks in a temple, exploring an eco-village where silk scarves are crafted by hand, visiting Khmer Rouge "killing fields," shopping in Vietnam’s largest vegetable market and taking a boat out into a natural bird sanctuary.

The boat itself is like a floating luxury hotel. All rooms are large suites and windows retract all the way down for a full view of the Mekong — the lifeline of these countries. Sunsets are best accompanied with a gin and tonic, crafted from local Mekong dry gin, in the lush rooftop garden. Scenic also does a stellar job of bringing an authentic street market-style lunch on board, where chefs serve up a buffet of bugs, frog legs and other local Cambodian and Vietnamese fare.

July through August bring end-of-summer sales. Scenic also offers an early-payment bonus of up to $500 per couple for cruises paid in full by the specified early booking date. Finally, joining the Scenic Club will get you discounts on future cruises.

Most cruisers look abroad, but the lower Mississippi offers a look at the antebellum South, from New Orleans to Memphis, making it a top pick for history buffs. Along the river, guests experience southern culture — with plenty of incredible food and historic sites.

Stops include Nottoway Plantation (the South’s largest remaining antebellum mansion); a visit to the quaint town of St. Francisville, Louisiana, situated on the bluffs of the Mississippi River with 140+ buildings on the National Register of Historic Places; the port of Natchez, Mississippi, a picturesque river town founded in the early 1700s and the oldest city in the state, and a stop in Vicksburg, Mississippi, a Civil War site.

The promotions page is the best place to search for ongoing deals. Save up to $2,500 on cruises taking place over the holiday season.

River sailings through Portugal are a new concept. The Viking Helgrim, coined the “baby long ship” for its size, is the newest cruising ship on Portugal’s River of Gold (Douro River). Starting in Lisbon, explore the city before joining up with the boat in Porto.

An exclusive Graham’s Port tasting and dinner is one of the many added excursions to choose from, but the magic really starts once the boat sets sail, passing through locks and stopping at the tiny towns of Regua, Pinhao, Barca d’Alva and the Spanish city of Salamanca, a UNESCO World Heritage Site. You'll taste Vinho Verde (green wine), port, almonds and olive oil from the region. Harry Potter fans will appreciate the University of Coimbra, where students wear black capes — one of J.K. Rowling’s inspirations.

Back on the baby long ship, the chef focuses on Portuguese cuisine and the long local wine list will give you a sense (or taste) of place. There’s an included shore excursion in every port, like a visit to Favaios to see traditional Portuguese bakeries and a wine lunch at a vineyard. Visiting less-discovered villages and towns is a standout for Viking, allowing guests to get a glimpse of Douro life. Guests often say it’s one of the more beautiful rivers to sail on, with its dramatic backdrop of rolling hills and lush green vineyards. On the last evening, docked in Porto, walk over the bridge at sunset and dine at Ostras for a memorable last supper.

Look for special deals and access to special cruise fares during Wave Season, around mid-January to mid-March, on select 2019, 2020 and 2021 cruises. Viking also has an ongoing promotions page online.

One of the best ways to learn about Bordeaux wine is by hopping on a small river boat and sailing to the breathtaking small towns and villages of Saint-Émilion, Medoc, Pauillac, Cadillac, Arachon and more, along the Gironde and Gironne rivers. The chef brings aboard fresh produce from the markets and villages throughout the region to serve guests meals that rival Michelin-starred restaurants — all with regional wines based on the sailing agenda. At jaw-dropping châteaux, multi-coursed dinners are served under the stars. On the boat, cocktail hours call for Arachon oysters and Champagne.

Other land-based activities include visiting a local farm in Bergerac with a foie gras tasting, shopping in Saint-Émilion, or simply e-biking around the countryside. Back in the city of Bordeaux, visit the hip wine museum, have lunch in a cheese cave at Baud et Millet, and shop for canelés, a famous Bordeaux pastry. Cruises are all-inclusive with no additional costs for excursions or drinks on board, making it a top-rated experience.

Scenic’s summer sale is on; select European cruises are up to $500 off for 2020. Scenic also offers an early-payment bonus of up to $500 per couple for cruises paid in full by the specified early book date. As mentioned, joining the Scenic Club will get you discounts on future cruises.

Hop the Danube and sail from Budapest to Munich during one of the most festive times in Europe, stopping at some of the most famous holiday markets. The itinerary starts in Budapest, sailing through Bratislava, Vienna, Durnstein, Passau, and Regensburg and ending in Munich.

Eat and drink while buying souvenirs in the Christmas markets of Regensburg. Gaze at Vienna’s Opera House, Burgtheater, Town Hall, St. Stephen’s Cathedral and Hofburg Imperial Palace. Get lost in one of the hundreds of gingerbread-like stalls with festive ornaments and warm libations in Passau. Hiking up to Bratislava Castle and Durnstein Castle or taking a scenic bike ride from Durnstein to Melk will help burn off all the extra calories.

Book in advance. A company rep notes the Christmas Market cruises are the most sought-after cruise itineraries.