13 Bottles of Gin to Collect From Around the World 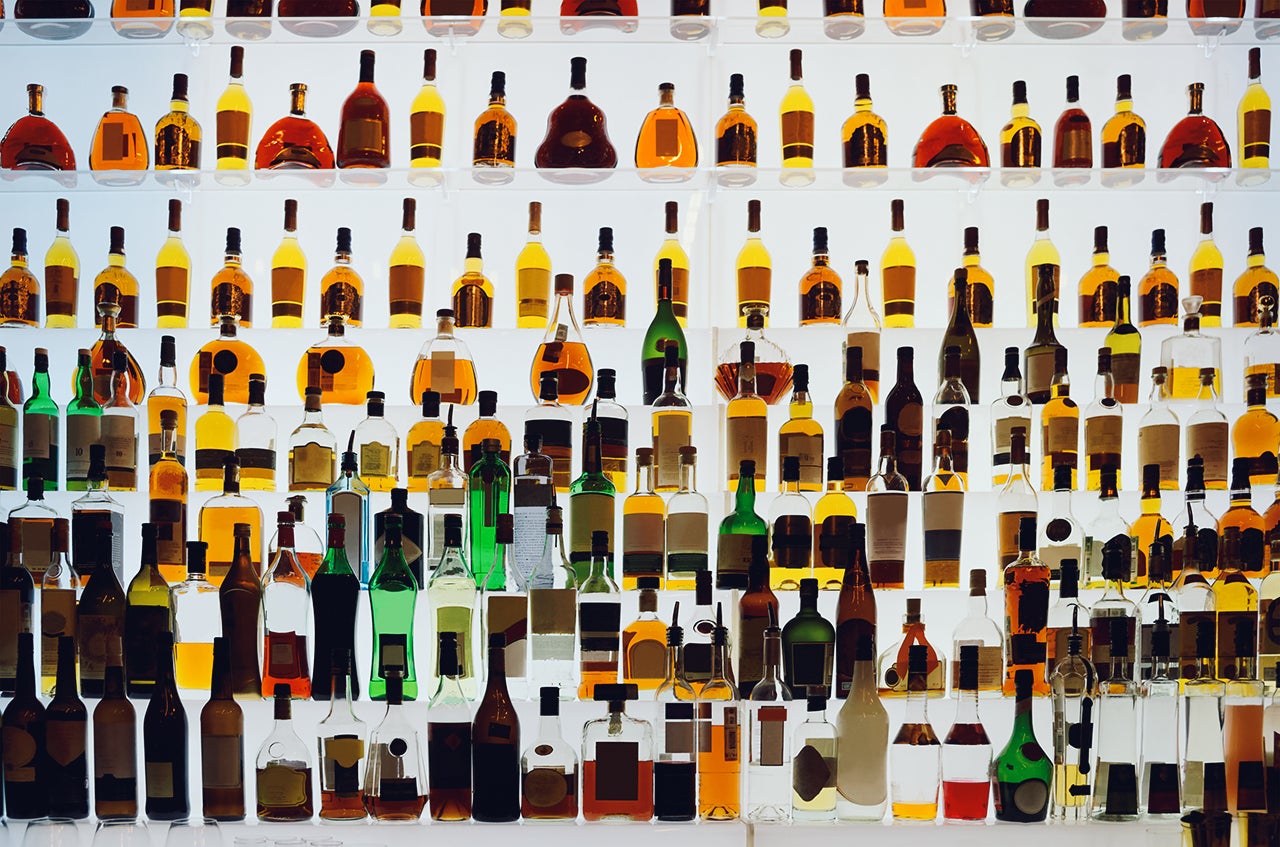 If you’re a gin drinker, you’re probably tapping into the riches of the current market. If you’re not, now’s a good time to start exploring this clear aromatic spirit. Stealing a page from the wine industry, a rash of “terroir” focused expressions from new and longstanding brands have cropped up around world markets. Based on locally foraged, farmed or sourced seasonal ingredients, distillers are creating one-of-a-kind taste profiles reflective of their regions. While some of these brands have made inroads into the US market, treat this list like a treasure hunt. Collect all 13 gins and your at-home bar — just like your passport stamps — will be the envy of your friends.

Where It's From: Miyagikyo, Japan

What Makes It Special: Demand for Japanese whisky shows no signs of abating. But as age-designated stocks deplete, notable brands are jumping into the global gin game. Nikka Coffey is well-known for its range of whiskies and has made other clear spirits for their domestic market for a while now. This newly released gin, produced on a Coffey still (made famous by Scotch whisky), includes Asian citrus fruits of yuzu, kabosu, amanatsu, and shikuwasa. Tangy apples and spicy sansho pepper give the final Japanese touch.

Where It's From: Speyside, Scotland

What Makes It Special: While the Scots’ passion for whisky isn’t waning any time soon, several distillers are courting a new love interest: gin. Take Caorunn. Produced in the Scottish Highlands of Speyside, this Celtic brand infuses five locally foraged botanicals: Rowan Berry, heather, Coul Blush apple, dandelion and bog myrtle. Each of these ingredients are plucked from a boreal forest within the Cairngorms National Park — walking distance from the whisky distillery Balmenach, where the brand is made.

Where It's From: Reykjavik, Iceland

What Makes It Special: Sheets of snow, mossy fields and hulking volcanoes define Iceland’s dramatic landscape. Certainly, gin-friendly botanicals must be lurking within that unusual biosphere, right? Founder Óskar Ericsson thinks so. An avid fisherman, he gathers riverside flora, including lavender-like angelica flowers and arctic thyme for his recipe. The addition of local honey to his Old Tom expression lends a touch of sweetness to this complex, floral spirit. Himbrimi is the Icelandic word for Loon, a water bird commonly spied by outdoorsmen on the water — where Ericsson suggests you drink his spirit, straight from the bottle.

Where It's From: Western Cape, South Africa

What Makes It Special: South Africa is home to the Cape Floral Kingdom, an indigenous botanical region recognized for its incredible diversity. Found within this kingdom is a scrub-like vegetation called Fynbos. One of the country’s first artisan producers of gin, Inverroche hand-harvests Fynbos from mountain areas and both distills and infuses their “Verdant” expression with the plant. The resulting pale green liquid has a fresh, floral and earthy profile.

Where It's From: Tranby, Norway

What Makes It Apecial: Kimerud, Norse for “hillside,” comes from a rural farm distillery in the knolls near Lier. Looking at photos, it appears exactly as one would imagine a tiny Norwegian distillery in the middle of, well, nowhere to be. But that bucolic smog-free landscape provides clean growing conditions for many of the 22 botanicals used in master distiller Ståle Johnsen’s gin. Some botanicals sprout right on the farm; others, like Rhodiola Rosea, require the scaling of cliffs in the arctic north to procure. Which, like a Norse hero, Ståle does himself. After distillation, only pure mountain water is added.

Where It's From: Healesville, Australia

What Makes It Special: Aussies are rarely shy, neither in personality nor in drink preferences — a trait neatly illustrated by the characterful “Bloody Shiraz” gin from Four Pillars. Like many on this list, the two-man team behind the brand are creative vanguards for their regional industry. Working with native Australian botanicals of lemon myrtle and Tasmanian pepper berry, the Bloody Shiraz gets its bold purple hue and red berry flavors from steeping the spirit with Yarra Valley Shiraz grapes for several weeks.

Where It's From: Hardwick, Vermont

What Makes It Special: Vermont has proven itself the New England nerve center for creative, locally-inspired alcoholic beverages. From the thriving craft beer scene to impressive cold-climate wineries working biblical miracles with hybrid grapes (e.g., La Garagista), it’s fitting that one of America’s best gins originates there. Bar Hill founder Todd Hardie bought his first bee hive in the 1970s. Today, he uses the nectar of local bees in his gins. The “Tom Cat” version is a robust barrel-aged expression that weaves honeysuckle sweetness with classic juniper punch.

Where It's From: Drosia, Greece

What Makes It Special: Unusual for the male-dominated spirits world, three women founded the brand: two second-generation distillers and a knowledgeable colleague from the drinks industry. The trio spent a year trialing different combinations of botanicals before deciding on the final blend. They chose to supplement classic base notes from juniper, angelica root, orris and cassia bark with regional Greek botanicals of schinos, myrtle leaves and orange blossom from Evia, and critamos from Crete. The addition of pink peppercorn lends a faint prick of spice.

Where It's From: Victoria, British Columbia

What Makes It Special: The historic Fairmont Empress Hotel in Victoria, British Columbia, has its own gin called 1908 Original Indigo. Infused with butterfly pea blossom, this trendy flower-based ingredient gives liquids a vibrant purple hue. Additional botanicals include the hotel’s Empress Blend Tea, plus grapefruit peel, coriander, rose petal, ginger root, cinnamon bark and, of course, juniper. When mixed with tonic or citrus, the pea blossom transforms any 1908-based cocktail into a lovely shade of pink.

Where It's From: Brooklyn, New York

What Makes It Special: Technically a liqueur, this magenta pink gin gets its pretty color from beach plums collected from North America’s Atlantic shoreline. It’s a rare, seasonal fruit that grows in the narrow band between Maine and Maryland. Steven DeAngelo, founder of Greenhook Ginsmiths, wanted to give an East Coast twist to the classic sloe gin traditionally made with sloe berries. To make their beach plum version, they soak whole plums in their American Dry Gin for seven months, sweetening it slightly with sugar. The resulting elixir works nicely in a French 75.

Where It's From: Angus, Scotland

What Makes It Special: Female master distiller Kirsty Black runs the show at Arbikie in Scotland, selecting the local botanicals that make up her eponymous gin. A plant scientist before joining the spirits industry, her choice of kelp, carline thistle and blaeberry conveys the sea, rocks and land surrounding their farmland distillery. As fourth generation farmers growing GMO-free crops, Arbikie is producing authentic farm-to-bottle spirits. The brand recently had their labor validated, winning several important awards.

Where It's From: Mendoza, Argentina

What Makes It Special: No drink is more Argentinian than yerba mate tea, made from the same leaves folks chew to diminish altitude sickness. Thus, working it into a gin profile made sense to Príncipe de los Apóstoles founder Tato Giovannoni. A well-liked character in South America’s cocktails and spirits scene, Tato wanted to make Latin America’s first small-batch premium gin. To that end, he layers fresh yerba mate leaves, the skins of pink grapefruit and minty eucalyptus and peppermint over juniper.

Where It's From: Juneau, Alaska

What Makes It Special: Given the vast wilderness that blankets Alaska, it seems logical that interesting native plants would thrive within. Plants capable of offering interesting notes to gin, that is. Husband and wife owners of Amalga Distillery, Maura Selenak and Brandon Howard, tracked down a few of those botanicals for their Juneauper Gin. Based out of Juneau’s historic downtown, they forage for Spruce tips, devil’s club and Labrador tea, which they layer onto a base of Alaskan grain. A whiff of Juneauper summons visions of the forest; it’s a true terroir-driven gin.