Second Cities: Destinations to add onto a trip to Berlin 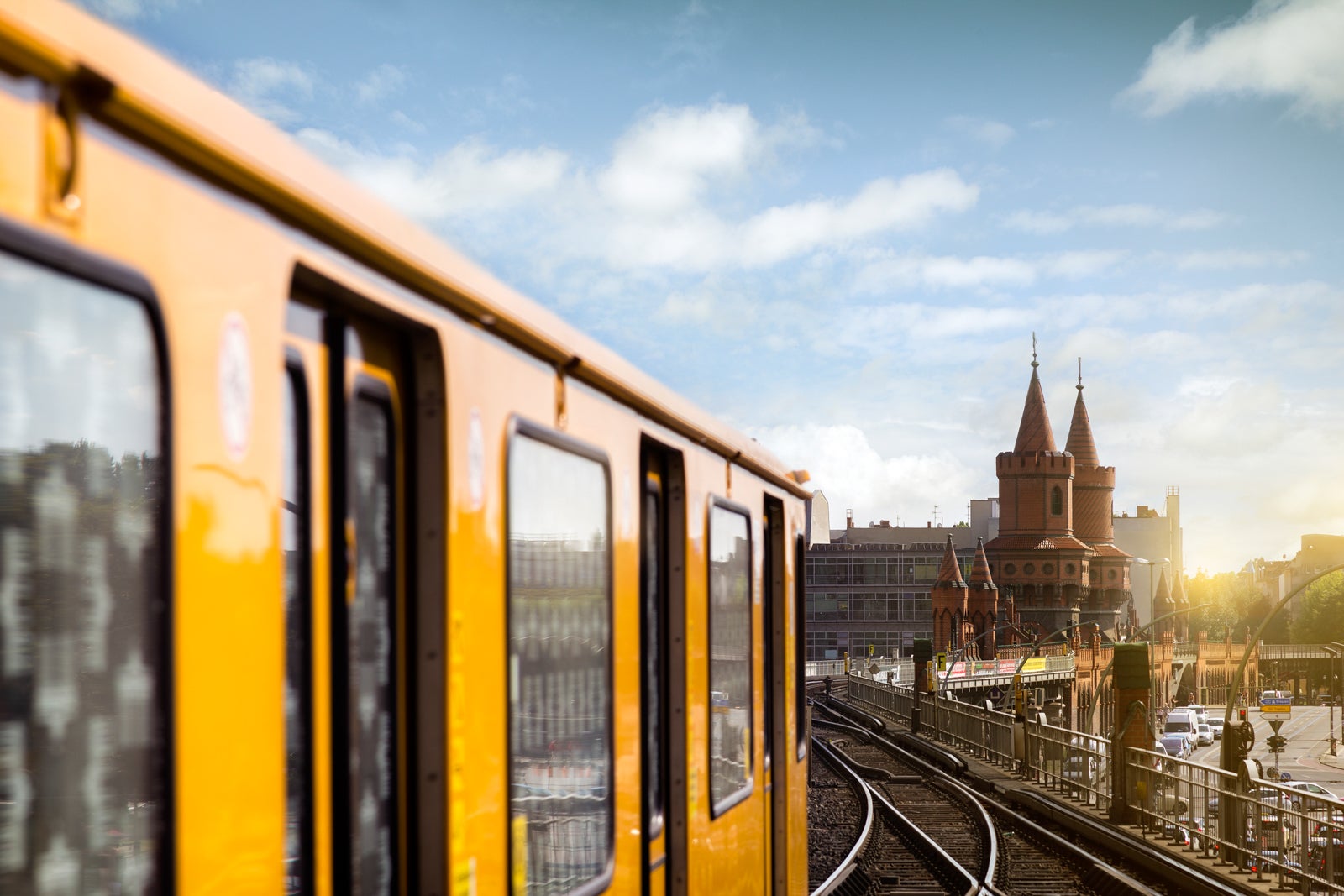 Welcome to TPG‘s series, Second Cities. The series is designed to help you find smaller or less-popular-but-equally-amazing places to visit no more than a few hours by air or land from your original destination so you can maximize your itinerary.

Berlin, with a reputation for being "poor but sexy," offers a wild club scene by night and a busy tourist scene by day.

The German capital has become a year-round destination; visitors crowd in on rental bikes and scooters and there is much to see. Berlin has more than 100 museums alongside remnants of its brutal history (Hitler's bunker) and the city's divided Cold War past.

The tourist scene is set against the backdrop of the modern city that has risen from a gritty wasteland since the Berlin Wall was torn down in 1989. Today, it boasts gleaming new tech headquarters and brightly colored aboveground water pipes (because of the city's high water table) that come with each construction project.

Present-day Berlin is becoming harder to navigate and the costs of hotels and tourist attractions are constantly rising, but we have some easy-to-reach second cities to add to your itinerary so you can still experience some of the best things about Berlin in other, less hectic destinations.

If your tourist dream is to experience the Berlin of the '90s, you’ll find it in Leipzig. A hotbed of revolutionary punks and rebel priests in the 1980s, the city actually led the citizen charge to overthrow the East German secret police.

Leftists, anarchists and assorted nonconformists can be found crowding into bars and spilling onto the sidewalks on the Eisenbahnstrasse, where political activists, graffiti taggers and squatters gather. Nonetheless, the city’s streets are safe and not as crowded as Berlin. Leipzig is also far from the infamous “Berliner Schnauze” (the “Berlin snout”), an abrupt unfriendly attitude. On the contrary, locals are curious and helpful.

Getting there: Leipzig's main train station is just an hour and 12 minutes from Berlin Hauptbahnhof, with trains departing every hour on the half-hour. Outside the train station, you’ll find trams that take you everywhere you want to go and the central city is just across the busy street.

Where to stay: The Westin Leipzig stands next to the central station -- convenient for Marriott Bonvoy members. Just two tram stops away is the Radisson Blu, perfect for earning some Radisson Rewards. German luxury chain Penta Leipzig, which has its own loyalty program, may be a good choice if you travel frequently in Germany.

What to see and do: The city was part of the former East Germany. Prices for beer, meals and overnight accommodation retain “old Berlin prices." In other words, it’s cheap. If you have an interest in Cold War intrigue, visit the Museum in der Runden Ecke, the “Museum in the Round Corner,” once a nondescript bunker for the secret police. Today, the building has been preserved to remind citizens of the crimes of the Stasi, East Germany’s secret police, as well as its demise.

Some of Germany’s most famous composers are from Leipzig. Classical music can be heard in the central train station and all around the city. Bach, Mendelssohn, Wagner, Mahler, Reger, and both Clara and Robert Schumann have a history in Leipzig. Many churches and concert halls are dedicated to their memory. Pay a visit to the Mendelssohn Haus, the Schumann Haus or the Bach Museum to learn about their lives. Meanwhile, the Leipzig Opera is a great place to hear some of their work. If you visit in the summer, check out the White Elster River, best seen from Clara-Zetkin Park at the live music stage.

On the Elbe River, Hamburg is the country’s second-largest city. The historic shipping port and city-center canals offer a different take on contemporary German culture that might surprise you. Hamburg was a central trading port for the Hanseatic League in the Middle Ages and, despite bombing in the Second World War, there are a number of architectural gems that remain.

Getting there: Take a train from Berlin Hauptbahnhof, which leaves for Hamburg nearly every 30 minutes. It takes about one hour and 45 minutes (ICE trains); two hours (IC trains).

Where to stay: Pick up Marriott Bonvoy points, whether you stay lakeside at Le Méridien Hamburg or harborside at The Westin Hamburg. To stay near central city, check out the Park Hyatt Hamburg, where members can earn World of Hyatt points. For a sleek budget hotel near the harbor, check out Arcotel Onyx.

What to see and do: Compared to Berlin, Hamburg is a calmer, gentler place and the hospitality of friendly northerners will put you in the mood to explore. The revitalized harbor district, HafenCity, with its modernist take on Bauhaus architecture, includes the Elbe Philharmonic Hall, Germany’s newest concert venue, sprawling on a peninsula along the Elbe. You can cruise the harbor on a boat tour, join a hop-on, hop-off boat to take you through the city by canal, or float serenely along the Alster, a tributary of the Elbe, upstream from HafenCity.

In the city center, you can explore baroque (St. Michael’s Church) and gothic (St. James’ church), Hanseatic landmarks like City Hall and other historic structures that survived the war. Walk the leafy streets near the Alster Lakes to get a feel for how the wealthy live.

Check out the St. Pauli Piers district in central Hamburg. It’s where the Beatles once performed. The neighborhood’s theater and entertainment district along Reeperbahn offers popular musical theater, German “boulevard” (broad slapstick) comedy and vaudeville, along with clubs and bars. Gentrification has expelled the seedier sex clubs and brothels from the former “red light district,” but the area is still known for both highbrow and lowbrow culture. For popular entertainment, catch a comedy show at the Schmidt Theater or a Broadway musical (translated into German) at Operettenhaus.

A small but hip city in southwest Poland, Wrocław is known by most Germans as Breslau, the city’s name when the Silesian region of Poland was German-controlled. Through its thousand-year history, it has also been claimed as Prussian, Soviet, Hungarian, Bohemian and Habsburg territory, giving it a colorful and varied central European lineage. Those who think European cities are not multicultural just haven’t discovered Wrocław yet.

How to get there: The Kraków Główny train station is the city's transportation hub. A daily direct train from Berlin takes about four hours. A European discount coach service, Flixbus, also offers service from Berlin to Wroclaw, usually for under 15 euros, and it takes just a half-hour longer.

Where to stay: Earn Hilton Honors points at DoubleTree by Hilton near the National Museum, or earn Radisson Rewards at the retro Radisson Blu. To go chic on a budget, try the Sleepwalker Boutique Suites in a classy row of 19th-century apartments in the historic Old Town.

What to see and do: Speaking of Old Town, it’s a perfect place to start exploring. Learn more about the city at its Prussian palace or the historic Market Square, where, much like picturesque Krakow, some facades date back to the 13th century. The eclectic architecture of the town hall, which was 250 years in the making, is a good place to start.

Skipping to the 20th century, Wroclaw’s Cold War history is told through more than 300 metal gnomes. In the 1980s, Wroclaw artists rebelled against the Soviet regime by drawing graffiti gnomes on the sides of buildings. After the fall of the iron curtain, these figures began to show up around the city. Each one has its own name and back story. Be sure to look it up each time you spot a new one.

If you’re a cinema buff, check out Poland’s largest film festival, and one of the most audience-friendly festivals in Europe. The New Horizons Film Festival in late July or early August usually features award-winning films from The Berlinale and Cannes Film Festival, with extremely affordable ticket prices and enthusiastic audiences. You can find the filmmakers at hip international restaurants near the cinema or along the river, where local residents go to enjoy the peaceful parkside landscape.