An underwhelming reveal: Here's why the new Chase Hyatt Business Card is a disappointment

Articles
Joseph Hostetler is a credit cards writer with more than five years of experience writing professionally about all things miles and points. He previously wrote and edited for Million Mile Secrets.
Follow
Oct. 07, 2021
•
11 min read 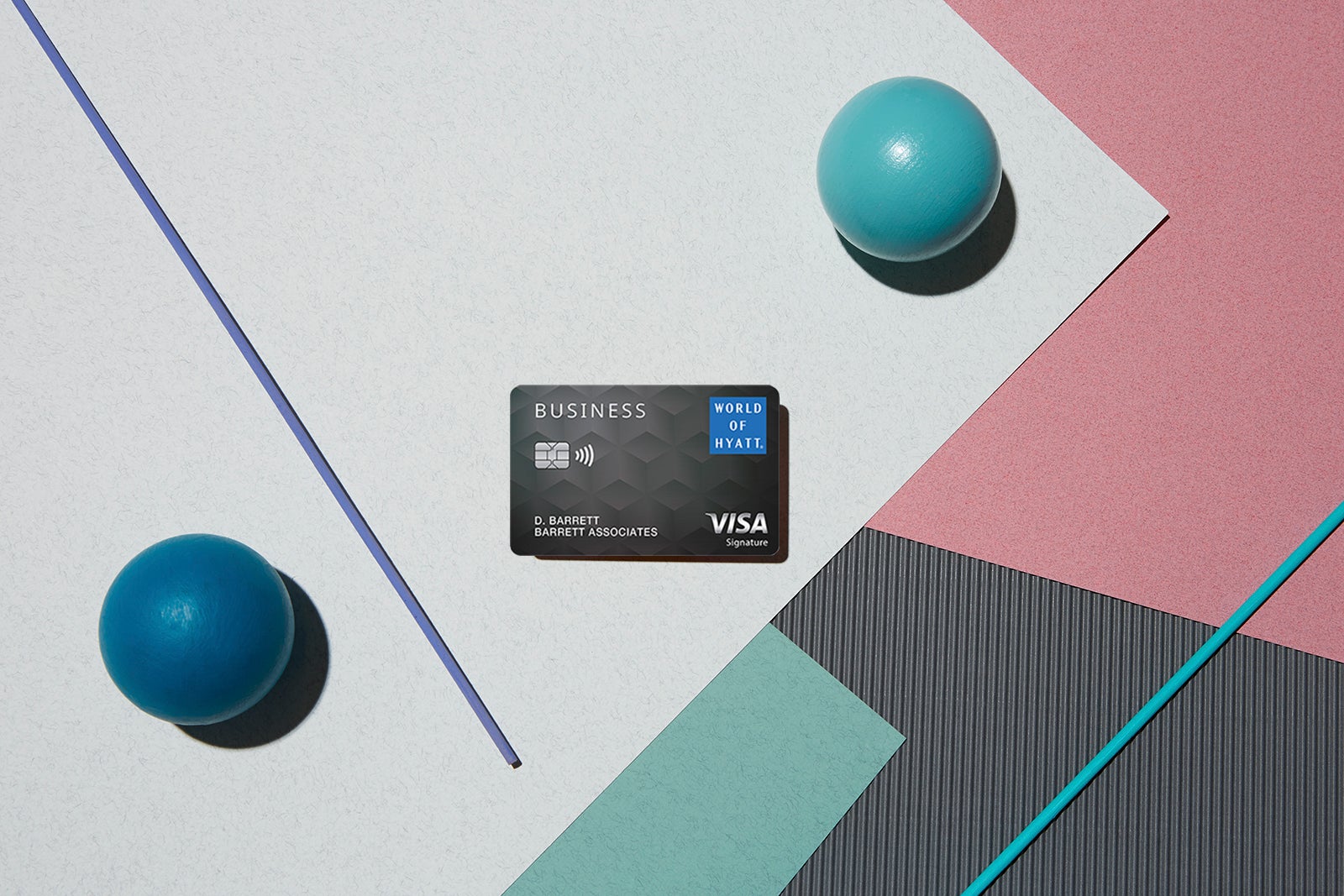 World of Hyatt is a (nearly unanimous) TPG team favorite among hotel loyalty programs -- and our readers love them, too. So when Hyatt announced it would be making a major announcement on Wednesday, Oct. 6, 2021, we speculated internally for days on what this big proclamation might reveal. Many of us conjectured about a new cobranded premium credit card, or at the very least, a cobranded business card.

When the announcement finally came, it was that Hyatt would be launching its first-ever credit card for businesses (and only the second card in its current lineup): The World of Hyatt Business Credit Card. While that was exciting news in and of itself, after an initial survey of the new card's benefits, the card quickly began to lose some of its luster.

Let's look at the card details and consider the ways Hyatt could have improved upon its first business credit card (and perhaps still can!).

Call us dreamers, but we had high hopes for a business-oriented World of Hyatt credit card.

A premium counterpart to the World of Hyatt Credit Card

Although we have speculated whether Hyatt intends to launch a premium credit card, too, we figured a new business credit card could also offer some premium perks that the personal World of Hyatt Credit Card does not, even if that required paying a higher annual fee.

Namely, we thought a business credit card with a higher annual fee could include Explorist, rather than Discoverist elite status. That might be enough to entice hardened road warriors who might be able to attain at least a base level of status on their own, but struggle to hit mid- or top-tier status. We also figured the card would offer spending-based elite boosts to help existing elites hit a higher rung of status, including benefits-rich Globalist.

We also pondered whether a Hyatt business credit card would offer an eye-catching sign-up bonus that would attract folks already loyal to the brand as well as new travelers, even if the minimum spending requirement was high.

Given businesses tend to spend more than individuals, we reasoned that a business credit card could offer a higher number of points for more spending on purchases, though we didn't have an exact number in mind.

While the World of Hyatt card earns 2 points per dollar on dining at restaurants, on tickets purchased directly from airlines, on local transit and commuting as well as on fitness club memberships, those are still relatively low earning rates. Perhaps a business credit card could earn even more points per dollar on typical work-related purchases, such as travel and office supplies.

The World of Hyatt Card automatically confers five elite-qualifying nights each calendar year. Cardholders can earn an additional two nights per $5,000 spent in a calendar year.

So, we figured perhaps a higher-priced business card would come with 10 elite nights per year, or at least let you earn more than two per spending bundle.

While both Hilton and Marriott field premium cobranded cards offer hundreds of dollars per year in statement credits at participating hotels and resorts, Hyatt does not. Perhaps launching a business credit card would be Hyatt's chance to change this.

Hotel credit cards often dangle a free night award after each cardmember anniversary as persuasion to pay the annual fee. The World of Hyatt personal card offers such a perk, and it's good for a night at hotels in Category 1-4, meaning it is worth up to 15,000 points. Perhaps a business credit card would up that category eligibility to 5 or 6, meaning it would be worth up to 20,000-25,000 points.

The World of Hyatt Business Credit Card that materialized ended up being less exciting than we predicted in some ways, but still very much worthwhile in others. Here are our main takeaways.

The World of Hyatt Business Credit Card offers 75,000 bonus Hyatt points after spending $7,500 on purchases within the first three months from account opening. That's the highest Hyatt bonus we've ever seen on a Hyatt card and a decent haul for those who qualify, worth up to $1,275 by TPG valuations. Earn the full bonus, and you have more than enough points for two nights at even some of Hyatt's most sought-after Category 7 hotels, such as the Park Hyatt Paris Vendôme.

However, this card introduces more customized ways to earn Hyatt points since cardholders can earn 2 points per dollar on the top three most utilized categories each calendar quarter through Dec. 31, 2022. After that, only the top two spending categories will accrue the 2x bonus. Eligible spend categories include:

These are certainly varied, but to fully leverage them, you'd have to watch your spending carefully and really try to allocate the lion's share of it to two or three particular areas. That might be feasible for some businesses, but an extra hoop to jump through for others.

Not to go too far into the weeds, but if it's Hyatt points you're after, and you spend in these categories anyway, you might be better off getting the following two cards instead, thanks to these earning rates:

With both these cards, six of the eight new bonus categories offered by the World of Hyatt Business Credit Card are covered. You can earn many more points with them and then convert your Chase Ultimate Rewards points into Hyatt points instantly instead of having to carry the Hyatt card.

In other words, you'll earn 20% more elite night credits for every $10,000 you spend with the business version compared to the personal one.

However, because the business card doesn't come with five initial free nights, you'll have to spend at least $60,000 on the business card before you surpass the elite nights offered by the personal card based on the same spending. That's a fairly disappointing prospect.

Only Discoverist elite status — but for you and 5 others

The business Hyatt card offers first-tier Discoverist elite status, the same as the personal Hyatt card does. However, those with the World of Hyatt Business Credit Card also can gift Discoverist status to five employees, friends or family members. They don't even have to be an authorized user on the card.

Unfortunately, there's not much to write about concerning Discoverist status. It offers benefits such as:

However, even the modest benefits for the cardholder and five others might be a factor in this card's favor for some.

Up to $100 in Hyatt statement credits

The World of Hyatt Business Credit Card offers a $50 statement when you spend $50+ with Hyatt (for room rate, food, spa, etc.) twice per anniversary year. That's up to $100 in statement credits annually. It's a bit more work to split this benefit over two transactions, but it shouldn't be too hard to maximize.

When you spend $50,000 on the World of Hyatt Business Credit Card in a calendar year, you'll earn a 10% rebate on points redemptions for the remainder of that calendar year. There are two frustrating things about this perk.

Next, this benefit isn't retroactive. You have to spend $50,000 before you're eligible for the rebate. So unless your small business spends a lot toward the beginning of the year, and you can redeem points after that, this might not be worth much.

This card's annual fee is $199 per year. While not extremely expensive, it is over twice what the personal card costs.

This perk is so unexpected and likely won't be considered a solid value-add to most people interested in applying for this card.

Chase small business cards don't count against the Chase 5/24 rule, so if you're hoping to open more Chase cards soon but are nearing your limit of five cards within a 24-month period (across all issuers), getting this card should not affect your application eligibility.

The World of Hyatt Business Credit Card is not precisely what we envisioned or had hoped for. That said, it does have some interesting features. First, its sign-up bonus is the highest a Hyatt credit card has offered, so that makes it worth considering. Second, the opportunity to extend Discoverist elite status to five others along with the cardholder is pretty impressive. Up to $100 in statement credits toward Hyatt purchases each year is also easy to use and effectively knocks the cost of the annual fee down to $99. Plus, if your business spends a lot, you could also benefit by earning additional elite night credits toward a higher tier of status.

That said, it's disappointing not to see this card offer automatic Explorist status and to limit the 10% points rebate to a mere 20,000 points per year...after meeting $50,000 in spending, even. It will also take some work to maximize the customized bonus categories.

That said, the card's 75,000-point bonus is likely worth the one-year test drive to Hyatt loyalists or small business owners that can maximize the spending categories.

Related stories
Great deal: Book business class tickets at premium economy prices with this Avianca LifeMiles sale
Holiday gift guide: TPG’s 22 travel-friendly picks for 2022
Vail Resorts lift-ticket sales capped; buy your Epic Pass by Dec. 4
These Black Friday hotel deals can save you hundreds on your next stay
Featured image by (Photo by John Gribben for The Points Guy)
Editorial disclaimer: Opinions expressed here are the author’s alone, not those of any bank, credit card issuer, airline or hotel chain, and have not been reviewed, approved or otherwise endorsed by any of these entities.