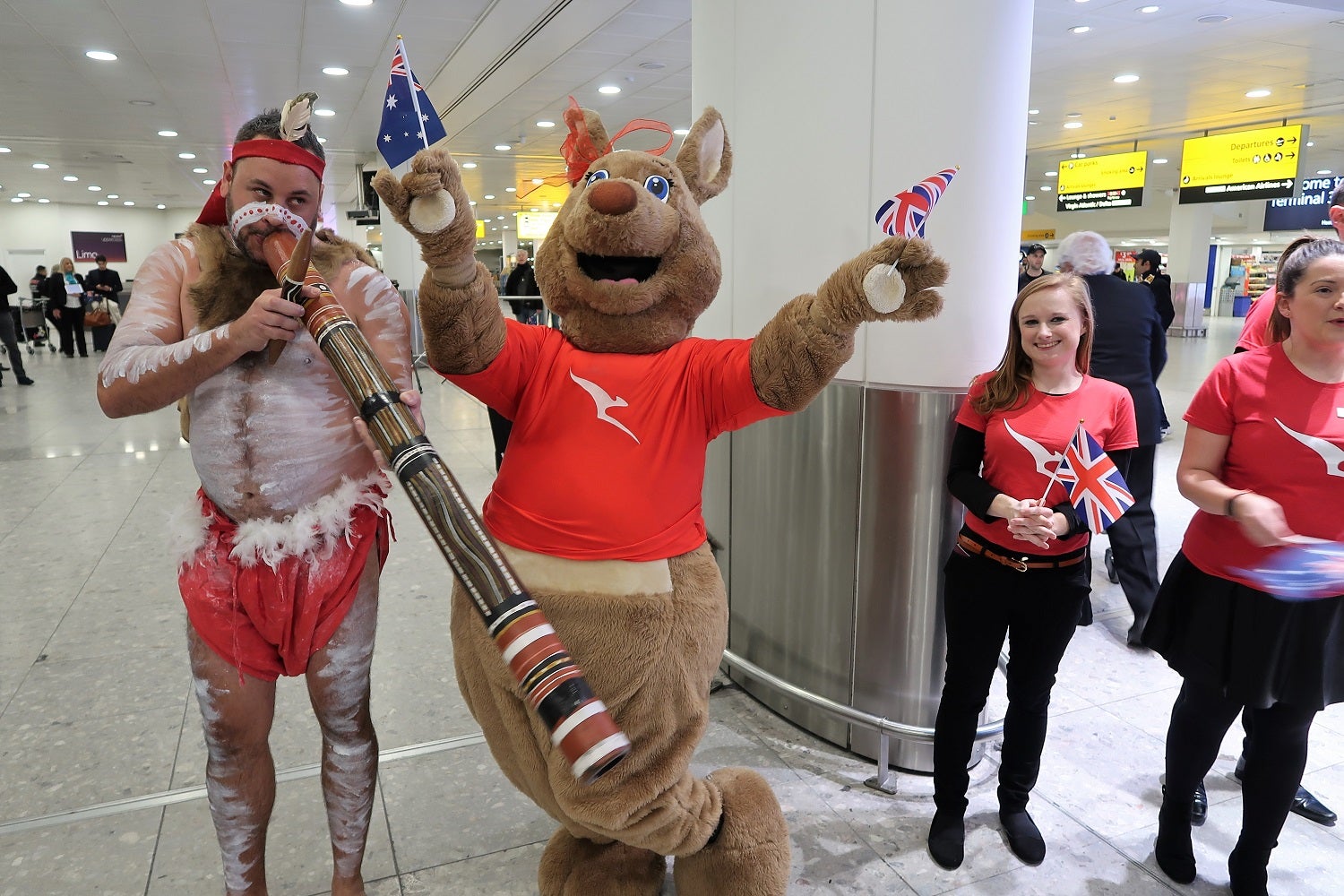 12 Fascinating Facts About the Inaugural Qantas Australia-London Flight
This post contains references to products from one or more of our advertisers. We may receive compensation when you click on links to those products. Terms apply to the offers listed on this page. For an explanation of our Advertising Policy, visit this page.

Hello from London! Qantas flight 9 has arrived in London Heathrow (LHR) after a 17:02 hour flight from Perth (PER). This remarkable trip marks the first ever nonstop passenger flight between Australia and Europe.

And, while the headlines have deservedly been about the historic connection of two continents for the first time, that's far from the only fascinating fact about this flight. Here are some interesting tidbits from Qantas flight 9.

1. There were empty seats.

That's right: for this historic flight, not every seat was taken. And that's because Qantas isn't selling all economy seats for the first few weeks that it's operating these flights. This inaugural flight departed with 212 passengers — meaning there were 24 empty seats. Most of the empty seats I found were blocked seats around members of the media who got stuck in economy. (Meanwhile, I had a passenger of size sitting next to me.) The pilots noted that Qantas will continue to block out seats for the first few weeks as the airline proves out the operational range of the aircraft on this route.

From water tanks to fuel tanks, the aircraft was completely topped off for this inaugural flight. Pilots and crew monitoring the gauges believe they can reduce the weight of the aircraft by a few tons by tweaking exactly how much is loaded on-board — from water and champagne to glasses and snacks.

3. There was no cargo in the hold.

While Qantas would certainly like to start making money carrying cargo on this route, the airline is also waiting until it has at least a few proving flights under its belt before adding cargo weight to the mix.

Qantas flight 9 isn't just the 17-hour flight from Perth to London. Qantas #9 originates in Melbourne (MEL) and flies 3.5 hours from Melbourne to Perth before continuing onward to London. And with this flight getting so much media coverage, Qantas didn't want to take any chances. While a Dreamliner registered as VH-ZND (delivered in February 2018) was used for the Perth-London leg, a different Qantas 787-9 (VH-ZNB) operated the first segment of Qantas flight 9 from Melbourne to Perth. This allowed the airline to prep one aircraft a bit early while also having a spare aircraft on hand just in case there were any issues.

Qantas only has four 787-9 Dreamliners currently in its fleet, meaning half of Qantas' Dreamliner fleet was in Perth before this flight.

5. The paint job on this aircraft added extra weight.

The 787-9 Dreamliner used on this flight was named Emily Kame Kngwarreye after an indigenous Australian artist. To honor her, this aircraft is painted with a special Aboriginal paint job — which adds around 100 kilograms (220 pounds) of additional weight.

Other earlier Qantas aircraft sport similar Aboriginal liveries which were painted with actual brush strokes. The trouble with doing it that way is that the rough surface actually creates a measurable drag during the flight. Qantas has learned its lesson, and the livery on this Dreamliner is evenly spray-painted on, so there's no additional drag — just additional weight.

6. A woman was one of the two flight captains.

In the US, only 4.4% of commercial airline pilots are female. Qantas' pilot roster is slightly more diverse with around 6% female pilots. But, choosing Captain Lisa Norman to lead this flight was far from a publicity ploy by Qantas.

Lisa has been flying since 1985, and a vast majority of that time (29 years) has been flying for Qantas. Recently she's been working as the Manager of Qantas' Boeing 787-9 Introduction Flight Operations. That means for the last three years, she's been an integral part of making this historic flight possible, from overseeing weight-reduction measures to training pilots on the new aircraft type. So, it was only fitting that she was selected as one of two captains for this flight. And, I was lucky enough to chat with her in a galley during the flight.

7. Twenty passengers were being intensely studied.

On this flight, 20 passengers were each wearing three devices: two wrist-wearable devices and one monitor taped to the passenger's thigh. A University of Sydney nutrition PhD candidate was on-board to assist these passengers with questions and conduct surveys about their experience. Her team will be following up with passengers to check on their jetlag and general well-being in the days after the flight.

The goal is to reduce the number of wearable devices to just the one device that's most accurate at tracking passenger outcomes after the flight, and tweak the on-board experience to reach the best outcomes.

In an effort to make this flight as light as possible, everything was planned out to a 'tea.' Qantas has quantified "more than 21,000 individual items loaded onto the aircraft" for this inaugural, including exactly 330 peppermint teabags. Experience from the first few weeks of these daily flights will lead to adjustments in exactly what's loaded onto future flights, including just how many TimTams and Carman's to load for the economy snack bar:

9. The flight flew over 13 countries.

During the flight, First Officer David Summergreene explained some of the challenges that the airline faced in planning this route. For example, this flight will always avoid flying over Ukraine, Syria and Yemen — all of which could theoretically be part of the most-efficient route between Australia and London depending on weather conditions.

While the route will likely vary from day to day, our flight plan on the inaugural took us over Sri Lanka, India, Oman, United Arab Emirates, Iran, Turkey, Bulgaria, Romania, Hungary, Austria, Germany, Netherlands and Belgium.

10. The cabin crew is London-based.

Believe it or not, the "Spirit of Australia" Qantas has a large cabin crew based in London. To my surprise, there's over 500 Qantas cabin crew there, and 12 of these London-based flight attendants were chosen by their peers to have the honor of working this flight.

With the plane very heavy with fuel for the long flight, the aircraft needed to pick up quite a bit of speed before it could take off. First Officer David Summergreene explained that the aircraft could have rotated at a lower speed. However, to reduce fuel burn on the ascent, the plane was kept on the ground until the aircraft reached 168 knots (193 mph). For those interested, V2 was calculated to be 172 knots (198 mph) and the pilots climbed out of Perth at 178 knots (205 mph).

WIth two separate Dreamliners operating each leg of this flight, a Qantas 9 flight will be in the air on average 20.5 hours per day. Adding in the stop in Perth and taxiing time, there's just over an hour between the scheduled departure of Qantas 9 from Melbourne and the previous day's scheduled arrival of flight 9 in London. And, it means that if there's even a slight delay, that there could be two Qantas #9 flights operating at the same time.

Stay tuned to TPG for a full review of the economy experience.