On Las Vegas Boulevard you can head south past the bright lights, big casinos, famous shows, and flashing slots and keep driving until you see some colorful hard rocks up against a blue desert sky. When you arrive at these colorful rock statues in the desert, you aren’t dreaming, you have arrived at Seven Magic Mountains…

This is a guest post from my dad, Grandpa Points. He and my mom are in their late-60’s, are (mostly) retired,

and are ticking off “bucket list” destinations quicker than they ever thought possible thanks to miles, points, and travel deals. They have an intense love of this country, of its National Parks and treasures, and have no problem with a clean budget hotel room and an economy airline seat on a low-cost airline as long as it gets them where they want to be. A photographer by trade he often tells his story not just with his words, but with his images. Today he brings us a story from another one of their adventures…

So, you think you have seen it all in Las Vegas and you know the city like the back of your slot pulling hand. The litany of over the top visuals and signature names can roll easily off your tongue. The Bellagio Fountains, The Eiffel Tower, The Mirage Volcano, The Canals of Venice, an Egyptian Pyramid and Sphinx, a Medieval Castle, a Roman Forum, The Linq High Roller, the New York Skyline and Caesar’s Empire can all be easily recalled and recited with your eyes shut while standing on one foot. 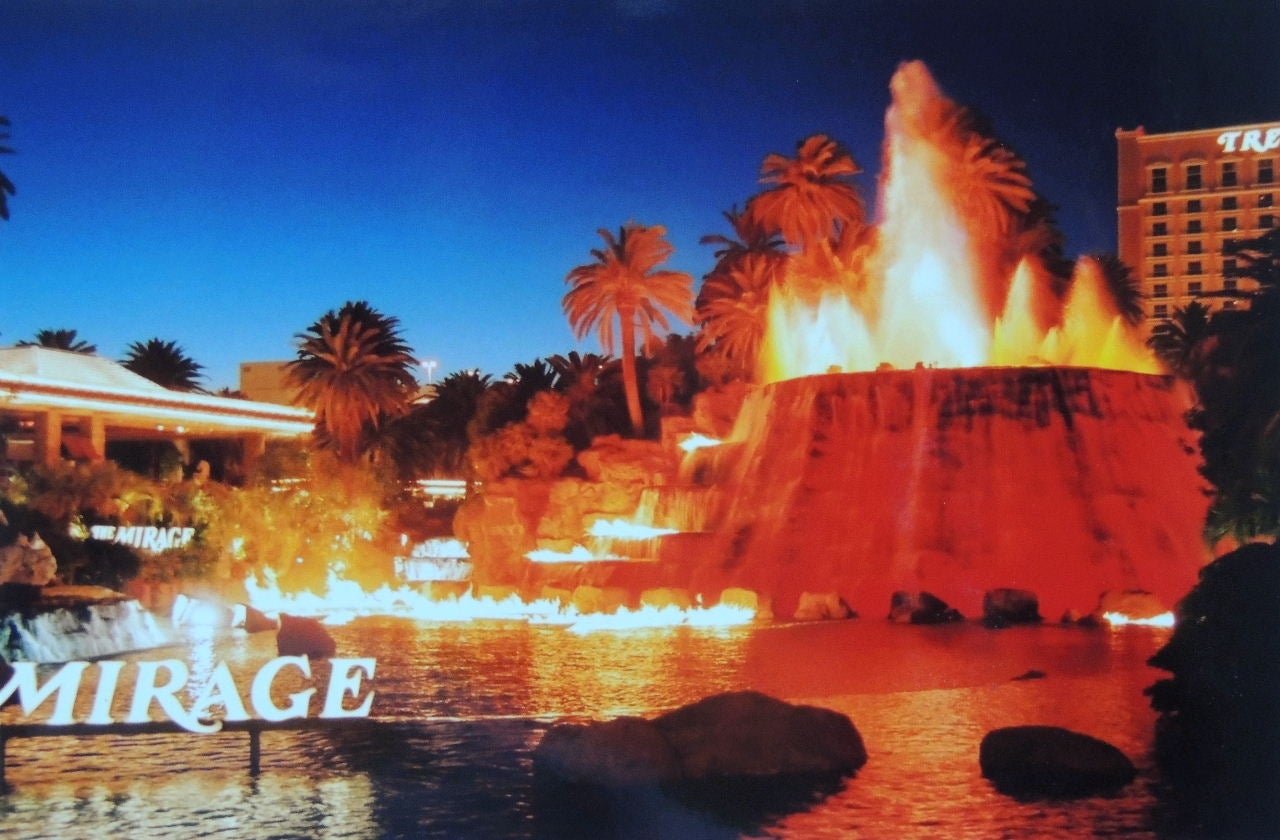 And, we can’t forget the neon lights, Cirque delights, topless shows and the characters that pose. Everywhere you go are the mega resorts and books for sports, figures in wax and bets to the max, magicians with tricks, hypnotists, and even famous ventriloquists. LEDs that turn the night into day and then light the way to the next big attraction and closest casino action, where slot machines give and take dreams in a loser’s blink and a winners wink.

We all know that Las Vegas, the one right there on Las Vegas Boulevard. Those iconic hotels and casinos are easily recognized and known by most. They are like beacons on a desert night and mirages on a hot desert day. They shouldn’t be there, should they? They are juxtapositions to their environment and contradictions to normalcy. They grew from someone’s vision and manifested from a plan to a reality. Or, is it a fantasy? They were seeded and nurtured and grew in size and stature right there on Las Vegas Boulevard.

Head South on Las Vegas Boulevard for a Rocking Time

The same descriptions and word pictures can be applied to an unusual and relatively unknown Vegas “‘land” mark that we accidentally discovered last week right there on Las Vegas Boulevard. I promise it is right there on the same famous street that is the home of “The Strip”.

What? You can’t see it. You even went to the top of The Stratosphere, got on the Big Shot Ride and didn’t see anything new or different. Well, head south, young one, head south. Stay on Las Vegas Boulevard and go past Caesar’s and MGM and Mandalay Bay. Continue on past the photo op at the “Welcome to Las Vegas” sign, zip past McCarren Airport and keep going south. No, don’t get on I-15. Stay on Las Vegas Boulevard. See South Point in the distance? Pass it up too. The M Resort is next. Keep the pedal to the metal.

I know, Las Vegas is now entirely in the rearview mirror. You probably feel like Bugsy Siegel’s “investors” when he was taking them to the edge of nowhere to show them the land where his dream should be built. But, don’t worry, you are still on Las Vegas Boulevard and as the childhood game once told you, “you are getting warmer.”  Start squinting and concentrating.  There, there on the horizon, do you see it? Just to the east of the road, Las Vegas Boulevard, do you see it?

At first, it looks like just a bump or a clump on the flat desert floor. Then some color starts to get involved, then a lot of color. 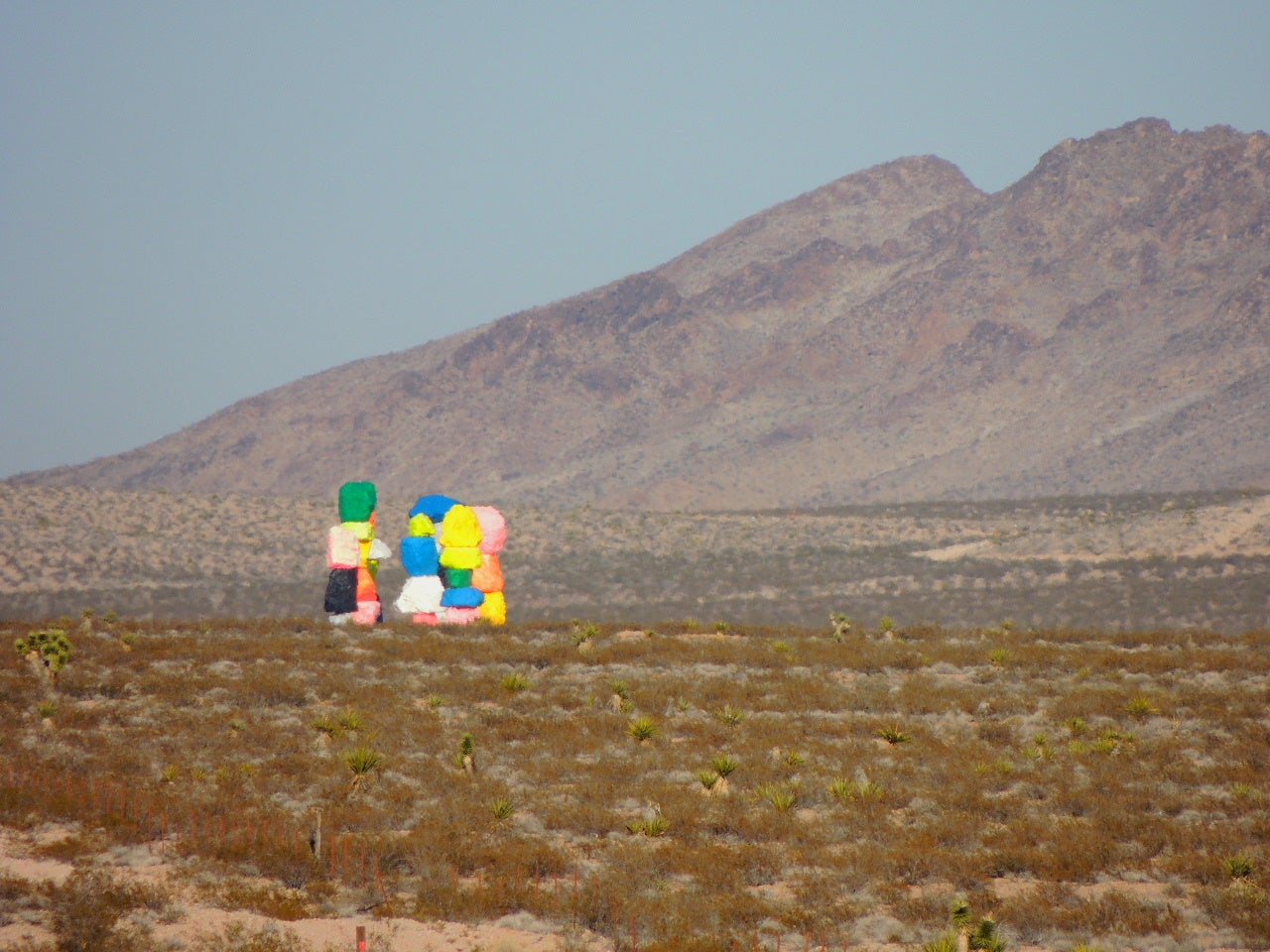 A LOT OF COLOR. The distant shape starts to come into focus and instead of a singular mass, seven individual structures appear. They sort of look like tall, clay figures you might see in a first grade art class, or ice cream castles, or faceless cartoon characters or leftovers from “Honey I Blew Up The Kids” movie. Or, you might see them as a cross between Stonehenge and the heads of Easter Island or a limbless Gumby from claymation fame. As you pull into the twenty car parking area, you realize that what you see are really very large rocks on top of very large rocks with each painted with a bright, bold and almost fluorescent color.

The stacks quickly bring to mind an exponentially magnified version of the small piles of rocks that you frequently encounter on hikes to mark paths or turns. When used this way, they are called cairns. The natural formations called Hoodoos, like those found in Bryce National Park, also bear a resemblance.

As it turns out, this is an art project called Seven Magic Mountains.

Each megarockalith is between 30 and 35 feet tall, although they feel taller when being dwarfed by them. Each mountain is made up of between three to six boulders of varying shapes. The colors are extremely vibrant and sensory exploding. They just seem to glow. They are fun to look at, fun to walk around and fun to think about. They stand there resolute with penguin perfect posture like sentinels guarding their post.

It seemed quiet the morning we visited even though there were dozens of other curious admirers there at the same time. The open expanse just seemed to swallow up any ambient noise. People posed for pictures as they moved about the flat semi-barren landscape to view the statues from every angle.

The figureless figures offer different perspectives as the point of view changes. They may seem to be isolated, paired off, or huddled up. They may appear to be surrounding you or just lining up. But in every instance, they do it proudly and boldly.

The project of the Seven Magic Mountains is a public art offering created by Ugo Rondinone. The creation is scheduled to be on display through the end of May of 2018. The site is about 25 miles from the heart of “The Strip” straight south on Las Vegas Boulevard. You can use I-15, but it takes some of the fun out of this blog! For informational purposes only, Las Vegas Boulevard extends for a length of 54.1 miles. Who would have known?

I am not learned or skilled enough to interpret the intent or meaning of these vertical stone formations. I just know I found them interesting and enjoyable. They were a big splash of color in an otherwise color challenged environment.

They were unexpected, unique, and offered a deliciously happy contrast to their surrounds. I liked them and maybe the best and last thing to say would be to simply say that, “They Rock!”

Summer Hull aka Mommy Points, ran the Mommy Points site for families who want to travel more for less using miles and points for seven years and now heads up TPG Family when she isn't exploring the world with her own two girls.
You might like
FedEx asks FAA for OK to add anti-missile systems to some cargo planes
News
12h ago
Deal alert: Icelandair fare sale to Europe as low as $332 from major US cities
Deals
Yesterday
Outdoor dining: a pandemic lifeline for restaurants
News
Yesterday
Delta SkyMiles® Platinum American Express Card