How to Fly Around the World With a Baby

Articles
Katherine Fan is a former senior travel features reporter at The Points Guy who covered everything from personal finance to travel and aviation.
Feb. 05, 2018
•
10 min read 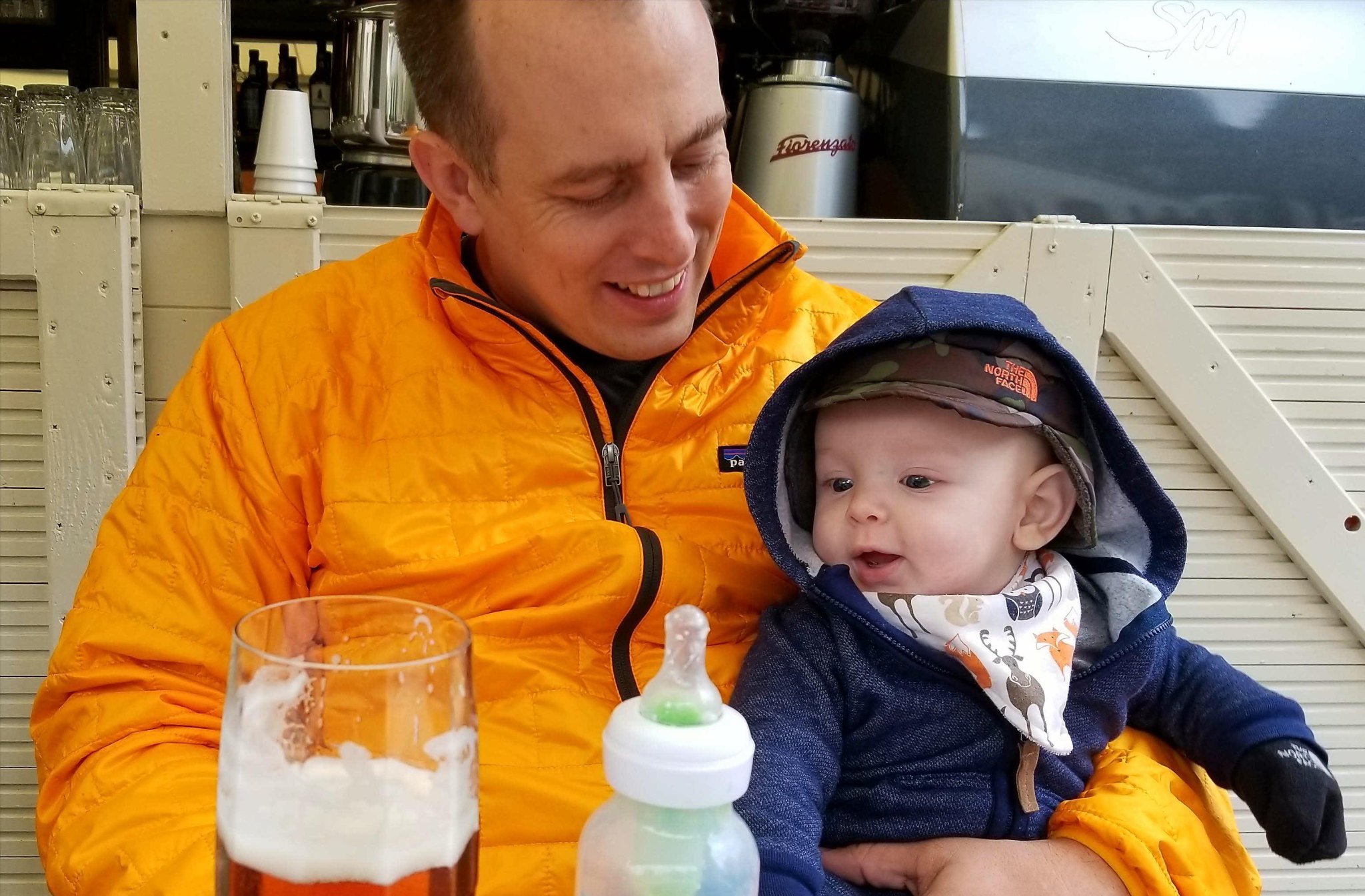 How to Fly Around the World With a Baby
This post contains references to products from one or more of our advertisers. We may receive compensation when you click on links to those products. Terms apply to the offers listed on this page. For an explanation of our Advertising Policy, visit this page.

Many TPG readers break six figures in travel miles every year, but Locke White stands out. He has logged more than 50,000 miles since starting his travels last year — not quite record territory, for sure, but consider one thing: Locke has only been in the game since late April 2017. That's because before that, he wasn't around.

His adventures around the world are a good example of how to solve a question that frequent flyers who are also new parents often ask themselves: How do I start Junior on frequent-flyer miles?

Bert and Marisa White are such avid travelers that they intentionally booked a future trip to Prague while she was pregnant with Locke, to force themselves to keep up their travel habit, even with a five-month-old in tow. “We wanted to get [the trip] on the schedule to make sure that having a baby doesn't stop us from traveling,” Bert says.

The Whites, whose home airport is Cleveland (CLE), travel primarily for pleasure on their own dime, although Bert is a private pilot and has taken Locke up in Cessna 172s and Cirrus SR-20s single-engine prop planes a number of times.

One of Locke's very first possessions was his passport, acquired before he was a month old. He sat for his Global Entry "interview" just a few weeks later.

Marisa is a dean at Cuyahoga Community College in Ohio, and a Ph.D candidate working through a long-distance program. As a result, Locke’s first flights were on United, headed to Denver, Colorado, to keep his mom company.

Bert is a consultant for a family-owned company, which gives him the schedule flexibility to care for Locke full-time.

“I get to have my son take a nap on my chest in the afternoons,” Bert said. “I don’t know many dads who get to enjoy that perk every day.”

Bert has taken full advantage of his flexibility with Locke: He just returned from a 10-day trip to India, with Locke in tow. Solo-parenting internationally presented some unique challenges, but Bert says he wouldn’t have it any other way.

The trip was part of a business trip for Bert, who needed to be in Bangalore for a company event. However, the dates conflicted with Marisa's work and school schedule, so the couple decided to try having Bert bring Locke solo.

"I was pretty nervous about traveling with just Locke by myself," Bert admitted, but "there definitely are harder ways to do it."

A big part of what made the trip so easy for the father-son duo was Lufthansa's "fantastic" customer service: On the final Frankfurt to Bangalore leg of the flight, Bert and Locke were able to enjoy the entire business-class cabin to themselves on a Boeing 747-8i.

One flight attendant fell in love with Locke, Bert chuckled. "I thought she was going to take him home." This friendly-skies experience is not unique where Locke and his travel needs are concerned: "I have yet to meet a flight attendant who isn't just thrilled to help us out."

One challenge of the trip happened on the return home. Leaving Bangalore headed into Frankfurt, airport security took issue with the size of Locke's eight-ounce bottles of formula. The chief of security would not allow Bert to carry on the formula without a doctor's prescription, and multiple agents got involved before one quietly let Bert and Locke pass through the checkpoint with the formula.

The Whites credit their loyalty and status with United and Star Alliance partners for simplifying travel with Locke. In 2017, Bert had both United Premier Gold as well as Delta Gold Medallion status, which helped the family find optimum seating arrangements for their longest-haul flights.

On their outbound route to Prague, Bert were able to score a bassinet row for Locke in one of the older 777-200s with an empty seat between Mom and Dad. “Not exactly suffering,” Bert laughed.

Learning to check bags was one of the biggest transitions Bert and Marisa have experienced between their past and current traveling habits. The second-biggest lesson in traveling with a baby was the need to be flexible.

"If you go into a trip with an agenda, there's no way [your planned activities] are going to happen," Bert says. "But if you go into the city and say 'These would be great to have happen', knowing that jet lag or the baby's schedule might not allow that... A more fluid approach to visiting a city or an area makes a huge difference."

As far as actual gear goes, Bert and Marisa highly recommend the Babyzen Yoyo. When they were expecting, the parents saw another family with the stroller and asked them for the name of the brand. "We've been extremely happy with it," Bert said, because of its durability, and being able to fold down into a tiny frame.

Whenever Locke isn't in the stroller, Bert and Marisa keep him close with their baby carrier: during Bert's trip to India, he wore Locke in a Ergobaby whenever possible.

Despite all the checked baggage he comes with, Locke is a very laid-back traveler. "He's a thumb-sucker, so he doesn't need a pacifier very much," Bert said, "although we always try to have a bottle ready especially for descent."

The Whites earned much of their travel status and stash of miles in 2016, which was "a great travel year for us," said Bert.

Business-class trips to India, France and Scotland that year, as well as domestic trips in between the international travel, made up the bulk of their status and miles earning. The family intentionally focused on earning United status with an eye toward the benefits of lounge access and seat selection.

"Having lounge access is a huge perk when you travel with a kid," Bert said.

The couple has quite a bit of insight regarding the child-friendliness of various airline lounges.

Air Canada lounges in Frankfurt were really great, but the ones in Toronto were "kinda crap," Bert said. Lufthansa lounges seem to be the best, with large, leather-padded changing tables and substantially-sized restrooms. (Air Canada and Lufthansa are members of Star Alliance with United, allowing cross-access to lounges and many other perks.)

Bert, in particular, has a unique perspective on the child-friendliness of men's restrooms and plane lavatories. He's observed that most of Western Europe and North America offer changing tables and accommodations, while in Eastern Europe, there were "not as much amenities in the men's rooms for baby changing options."

Another interesting observation Bert has made regarding child-friendly lavatories is that the changing table on the upper deck of the Lufthansa 747-400 is far smaller than the one in the lower deck restroom of the 747-800i: "The lower deck restroom is probably 50% larger, and has a commensurately larger table."

Although Locke already has United and Delta accounts in his names, he doesn't currently have any miles or status of his own because he's been booked on lap child tickets thus far. While Bert has appealed to both airlines to grant Locke credit for lifetime miles — "how cool would it be for him to hit million-miler status by age 10 or 12?" — he hasn't had any luck yet.

Once Locke turns two, the Whites plan to reduce the number of flights they take in business class, Bert said. "We will suck it up and do more economy trips with him, because [those seats] for him are probably not worth the extra money."

The family has learned the hard way to "double and triple-check lap child tickets until you know that they have been booked." Although most airlines have fairly clear guidelines for booking child fares on their websites, the actual experience has not always been so straightforward, especially if using a travel voucher or booking award tickets.

Often, the best way to ensure success is to call customer service directly, Bert said. "Having status helps here a lot because you get a person quicker as opposed to just waiting around."

All images courtesy of Bert and Marisa White