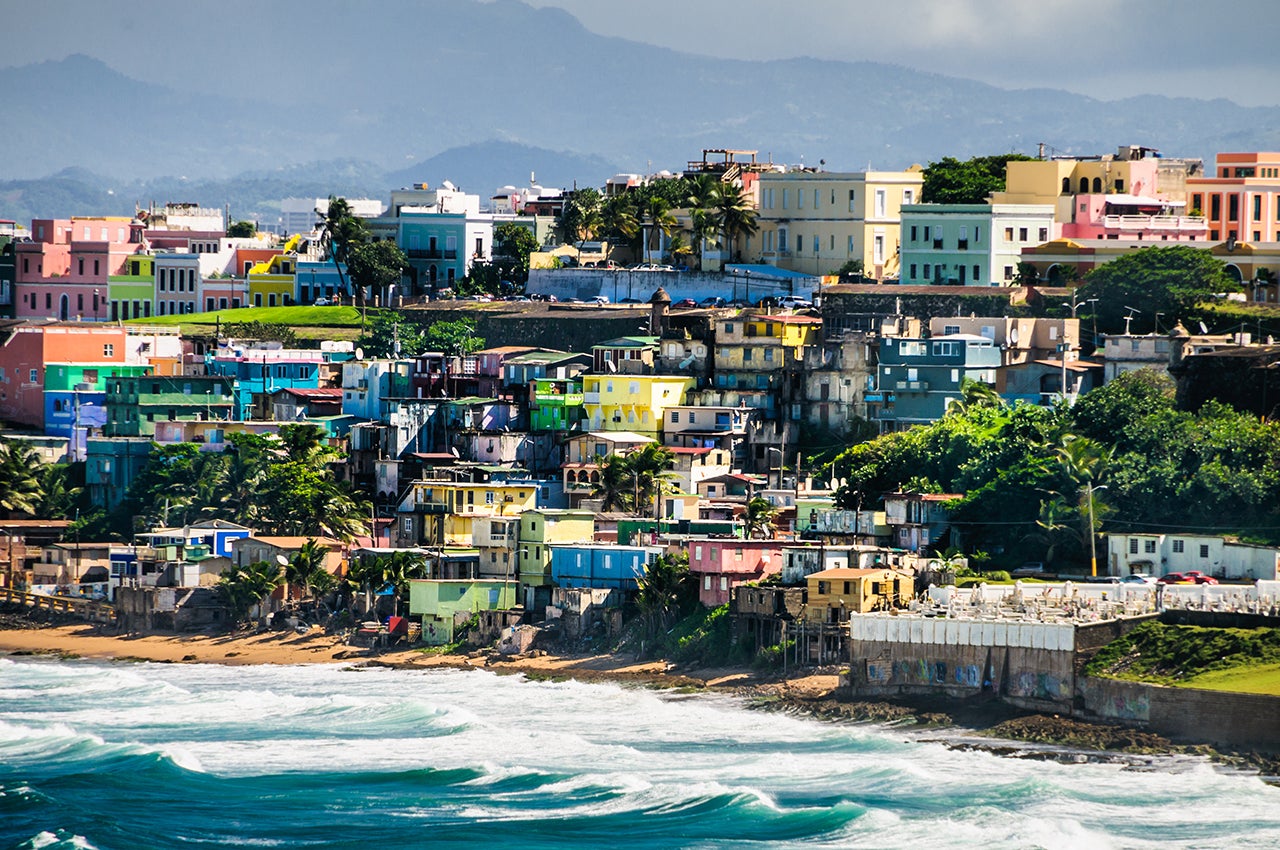 Why I Went Back to Puerto Rico to Help the Recovery Effort
This post contains references to products from one or more of our advertisers. We may receive compensation when you click on links to those products. Terms apply to the offers listed on this page. For an explanation of our Advertising Policy, visit this page.

Just under eight and a half years ago, I married my college sweetheart Katie. Two days after our wedding, we were driving separate cars from Atlanta to Austin to start a new life in Texas. With Katie diving right into her PhD program and my efforts to get a job in our new home, we had no time for a standard just-after-the-wedding honeymoon.

However, we were able to put together something special for a few months later: a honeymoon to Puerto Rico including traveling around the island and then a seven-night cruise out of San Juan.

We were amazed by the natural beauty of Puerto Rico, from the magnificent El Yunque rain forest to the fascinating Vieques bioluminescent bay. Just as impressive were the man-made beauties of the island: Arecibo Observatory — the world's largest telescope in the world, at least until 2016 — and the impressive Castillo San Cristóbal.

However, with so much to explore in the world, we rarely circle back to places we've explored. So, while we hadn't been back to the island since that January 2010 honeymoon, Puerto Rico still held a special place for us — which is why we were especially saddened by Hurricane Maria's devastation of the island. The 10-th most intense hurricane on record ripped through the island, inflicting around $100 billion in damage.

The rain forest we'd hiked through together was deemed "obliterated". Even worse was the heartbreaking toll that the monster storm left on Puerto Rico's residents. At one point, every single resident on the island was without central power or communications — and more than 40% still don't have power.

When I was asked if I wanted to join the TPG team trip to visit Puerto Rico, my emotions were mixed, and I had plenty of questions: Is the island ready for visitors? Would visiting take precious resources away from the recovery?

I was assured the answer was that yes, Puerto Rico is ready for tourists, and that our visiting wouldn't hamper ongoing relief efforts one bit. We would, in fact, be going there to help with the recovery effort.

Although my JetBlue flight from Tampa (TPA) to San Juan (SJU) was almost fully booked, I was able to snag a seat, and I couldn't wait to see Puerto Rico again. As we approached for our dusk landing, I got teary-eyed as I saw the coast light up. While there's still plenty work that needs to be done, power was indeed mostly restored in San Juan. On final approach into SJU, bright Christmas trees and massive glowing advertisements gave a sense of normalcy.

However, not everything was as before. I noticed that there were neighborhoods fulll of blue roofs. As we got closer, I realized with a gasp that — of course — those roofs were blue tarps. On the ride from the airport, we passed by at least a couple of dark neighborhoods; our driver explained that there are still isolated parts even in San Juan that still haven't had their power restored. The recovery was still very much ongoing.

While we were also there to help rebuild — and still highly encourage readers to join TPG in donating to the recovery effort — the main question on our minds for this trip remained whteher San Juan is ready for tourism again?.While just there for a short time, we found that the answer is Yes, absolutely.

We saw bustling restaurants in Condado, and packed food truck parks and crowded bars in Old San Juan. In these tourist-centric areas, there was not one sign I could find that a devastating Category 5 hurricane had passed through just a few months prior — as you can see from the Facebook Live TPG did on Saturday night.

But what about outside of San Juan? Unfortunately we didn't get to explore too much outside of the capital during our short time on the island. However, we took a hour and a half bus ride from San Juan to Juana Díaz in the south-central part of the island. Along the way, we saw signs of the storm: blown-out billboards, trees down in the forests and scattered tarps on buildings. However, we maintained cell reception the whole way. The highways needed repairs in parts, but we were able to drive at highway speeds for much of the trip.

In Juana Díaz, we celebrated Three Kings Day by attending the town's parade. Besides a few tilted power lines, the only sign of Hurricane Maria was a literal sign reminding revelers to not let Hurricane Maria "take away your happiness."

And it seemed the people of Puerto Rico took that message to heart.

Normalcy is certainly returning to the island. There's still plenty of recovery work to be done, and you can still donate to help those efforts. But, if you'd rather spend your money than donate it, there's something else that you can do: visit Puerto Rico.

One thing that certainly was clear from my return to Puerto Rico is that San Juan (at least) is ready for tourists. So, enjoy the history, culture, drinking and — if it's something you like to do — gambling there.

We will be following up with posts soon on the top reasons to visit Puerto Rico, the best ways to fly there and how to get there on points and miles. Stay tuned for those. For now, consider helping the recovery in Puerto Rico by spending a vacation there in 2018.