Las Vegas is an interesting hotel market as there are well over 100,000 hotel rooms in the area and rates can get incredibly low at just $39+ for some rooms…generally plus resort fees, but that’s a whine for another time. In short, you can usually find a relatively cheap place to lay your head in Sin City. However, usually doesn’t mean always. If a very big event is going on in town, the $39 a night cheap-o-rooms can quickly become $539+ rooms. And so it was that I had a meeting in Las Vegas the week of the Consumer Electronics Show, otherwise known as CES. This is one of the biggest annual events in Las Vegas, and when it hits, even joints like Circus Circus and the Excalibur jump from $39 to $500+ a night. Nicer places like Bellagio, Caesars, and Aria jump to darn near $1,000 per night for a standard room.

Clearly, those rates were never going to happen on my budget. I had to get creative to find a place to stay in Vegas since I was not only booking during the week of CES, but I was doing so just a couple weeks in advance after all the half-way reasonable options had been taken.

Using Hotel Points to Save Big

My fallback plan was a tried but true one, use hotel points. There are actually lots of hotel loyalty program relationships in Vegas, but most of them do not have guaranteed availability. For example, the World of Hyatt program has a partnership with the M life hotels such as Bellagio, Mirage, Mandalay Bay, MGM, and more so that you can use your Hyatt points to book a stay. However, unlike with a regular Hyatt property, this particular relationship does not guarantee that a room is available for points just because it is for sale with cash, and not surprisingly award availability was 100% blacked out using Hyatt points. I found much the same result with other similar programs for the week of CES.

The one exception was the 1,300 room SLS Las Vegas Hotel and Casino on the Northernmost stopping point for the monorail on the Las Vegas Strip. For those familiar with Vegas history, this is the former location of the Sahara. Since it re-opened as the SLS, which stands for Style, Luxury and Service, it was briefly in the Hilton family under their Curio brand, and then joined the Starwood family under the Starwood Tribute Portfolio in 2015. While the World Tower and Story Tower are both a part of SLS, a smaller third tower was rebranded as the W Las Vegas with its own pool, entrance, 289 rooms.

Enough of the history lesson, the SLS was available for my date for either $690+ per night or 10,000 SPG points. This was the easiest decision I’ve ever made, and within seconds of spotting the award availability, I spent 10k SPG points and had a place to stay in Vegas during the insane CEW week. Assuming you are going to Vegas on a normal week, the SLS can often be had for very reasonable rates from about $59 per night.

The reason for the normally low rates is at least partly because of the SLS’s very northern location on the Strip. It is right across from Circus Circus and very close to the Stratosphere. To put it another way, the SLS is about a 2.5-mile walk or cab ride from Bellagio, though remember you can also use the monorail to get you down the Strip much cheaper, and potentially faster, than a cab. In the interest of time, I took a cab from the airport, but they do contract with a shuttle company at $8.50 per person to/from the airport. Shuttles run on the half hour or hour, depending on the time of day.

I have SPG Platinum status and received an email from the property in advance asking for my arrival time and advising me to check in at the VIP Concierge Lounge across from the Perq Coffee shop.

The check-in was pretty straightforward and I neither asked for or received any sort of upgrade with my Platinum status, but keep in mind this was CES week. SPG Platinum status at the SLS does get you complimentary breakfast at the Northside Cafe, or you can actually use the credit (which I think it was $15 per person) at any time of the day for any item on the Northside menu in case you miss breakfast. My schedule didn’t allow me to really use the Platinum breakfast benefit on this trip, but the restaurant looked good enough and staff were friendly when I stopped in to snap a photo of the menu.

At check-in, I was also given a drink voucher worth up to $15 to use at the hotel bar or at Perq. I opted for a bottle of pressed juice as I was heading out the door to the airport that was really good and otherwise selling for about $8 – $9 a bottle. 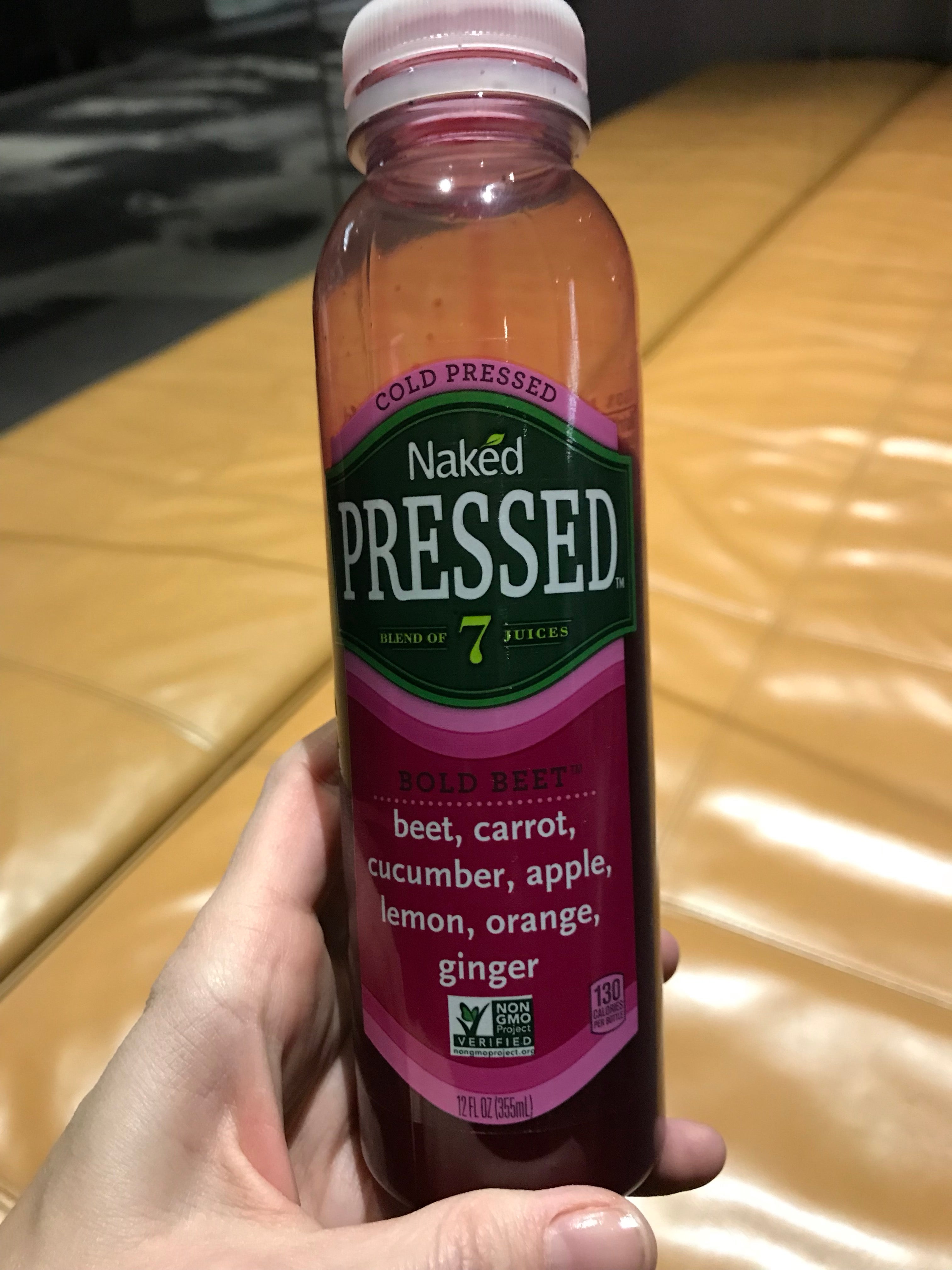 The hotel itself is pretty dark, but the elevators taking you up to the rooms are anything but dark and are instead quite gold and glitzy.

Once you reach your floor, the ambiance goes back to dark and mysterious.

My room was a very standard roughly 360 square foot World Tower room with two double beds. Y’all, these beds were small and in my mind not even remotely workable for sharing with anyone. It was just me on the trip, so I did fine, but for a family, this would not work at all unless you really like to snuggle. Even then, just don’t do it.

In addition to the beds, the SLS standard room had one sitting chair as well as a small desk and a mirrored wall with a TV. 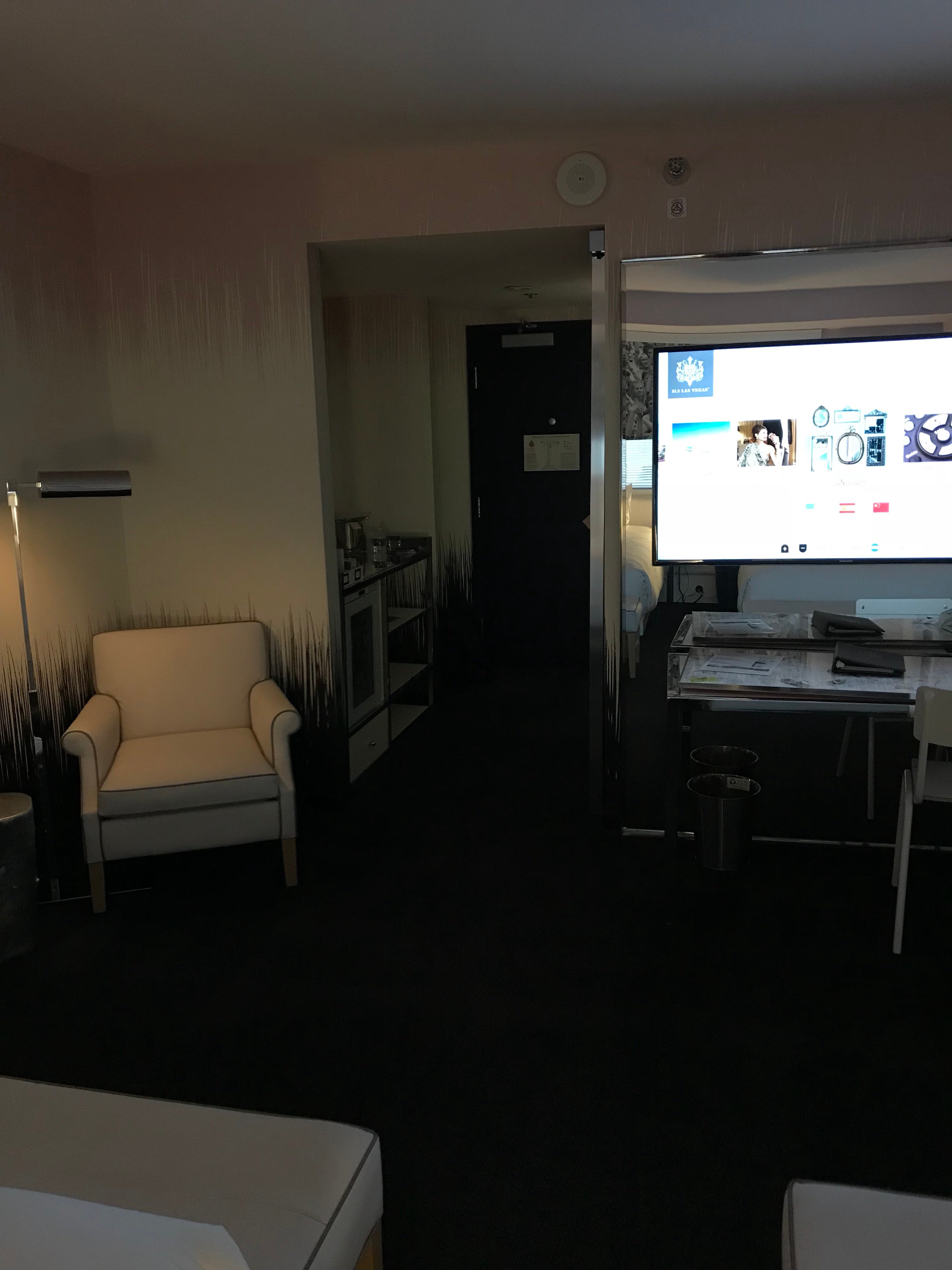 The SLS bathroom was white, bright, and clean with a walk-in shower and plenty of towels. 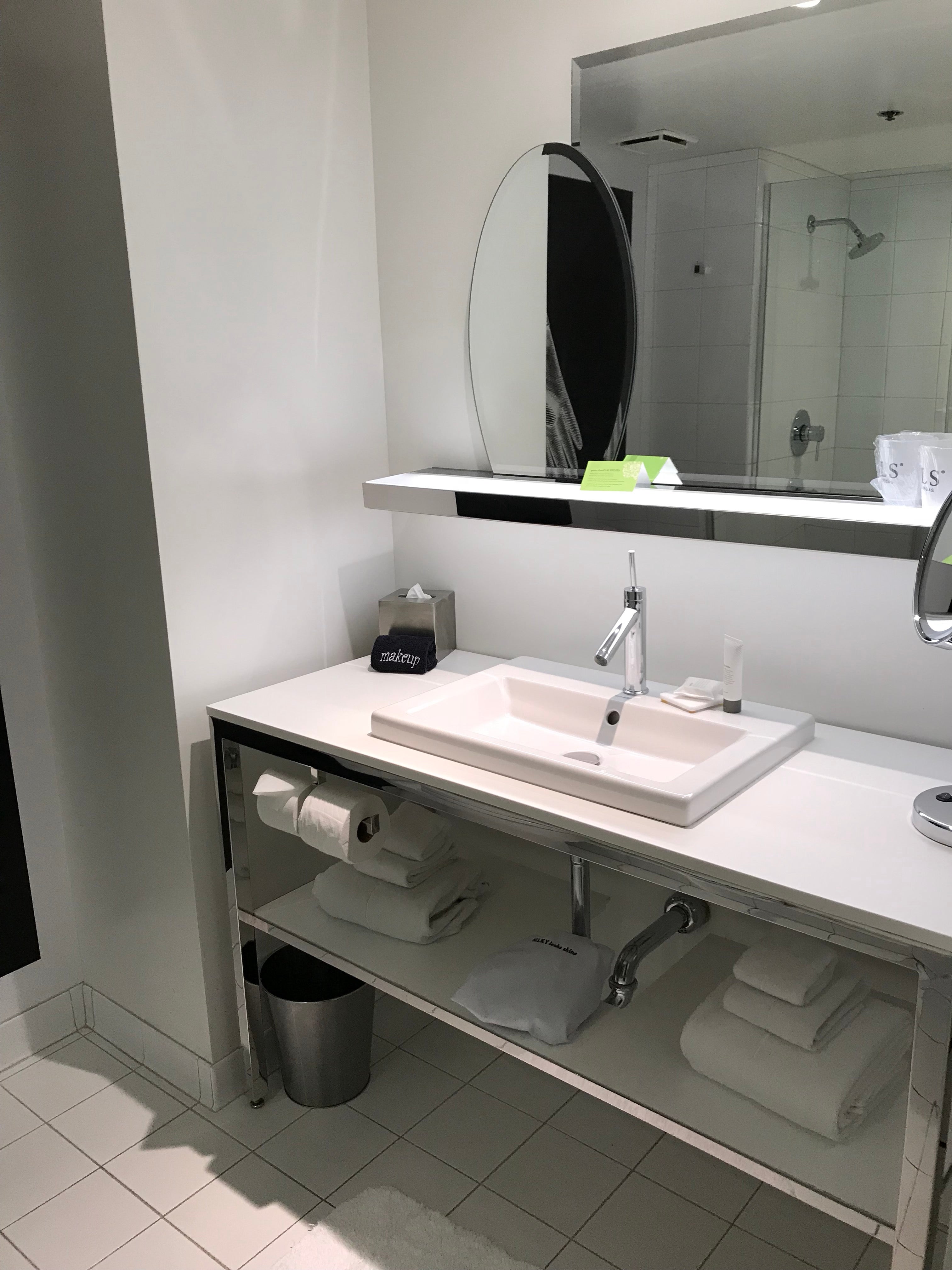 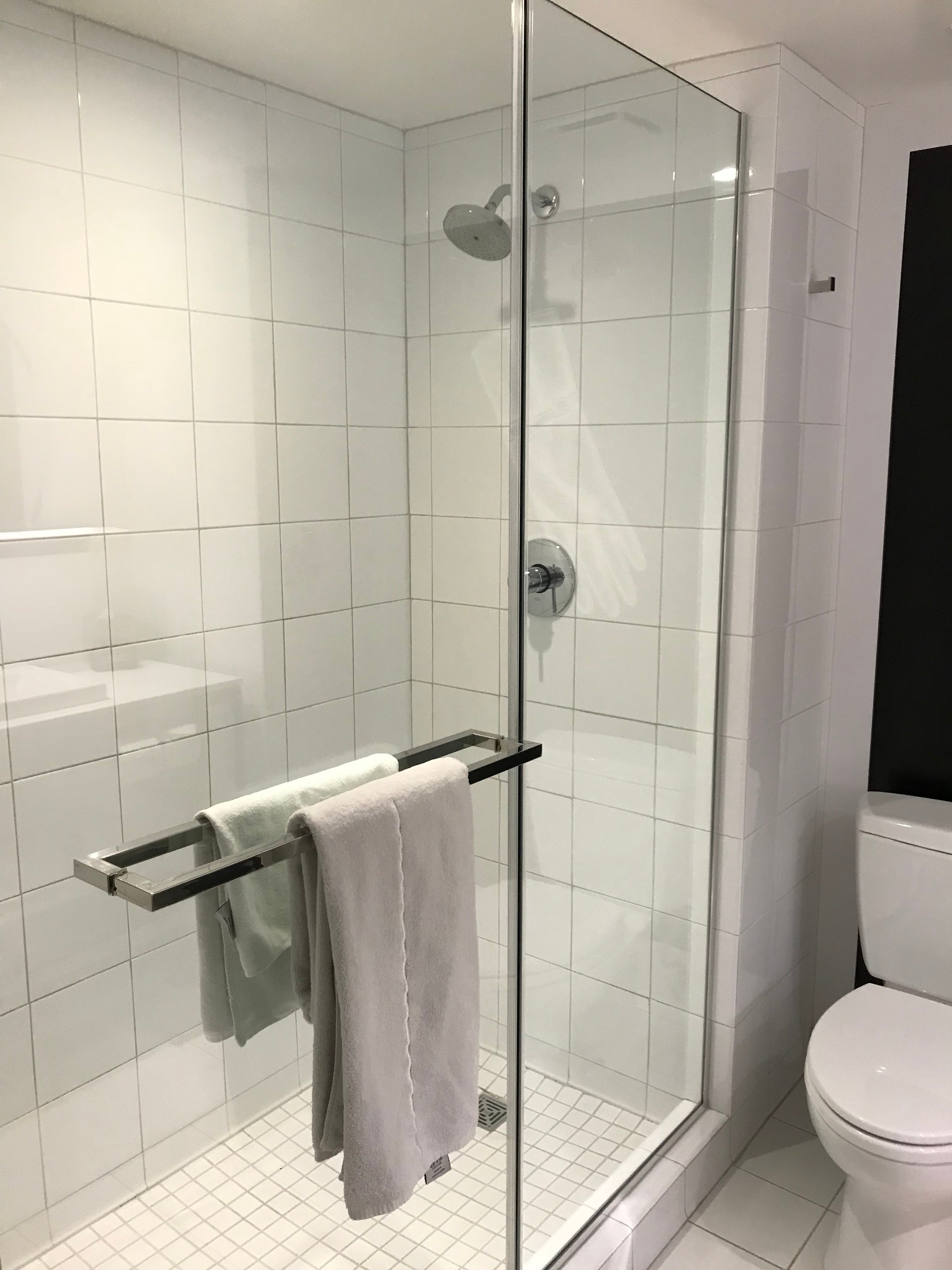 My only charge at the hotel was $36.28 for the nightly resort fee that includes essentially nothing. They say it includes internet, local and toll-free phone calls, pool and fitness center access, and concierge services. You know, things that hotels include anyway.

The one good thing about the SLS when it comes to pesky fees is that there is no additional parking fee the way there is at most major Strip hotel and casino properties. The SLS resort fee does include valet or self-parking, which is increasingly rare in Vegas these days.

It was raining on my trip, so I couldn’t get a good photo of the pool and frankly didn’t spend any measurable time in the property outside of my room on this short trip, so I can’t speak much to the additional amenities beyond confirming that there is, in fact, a casino at this property and that everyone I encountered was friendly and helpful. I can say that I was thrilled at the value my SPG points gave me at the SLS on this very expensive week in Las Vegas.

The location of the SLS isn’t the best in Vegas, but it also isn’t terrible. The SLS gets mixed reviews, but I actually kind of liked it for a funky less expensive Vegas hotel where your SPG Platinum status can score you a meal and a couple free drinks.

Have you stayed at the SLS? What did you think?

Summer Hull aka Mommy Points, ran the Mommy Points site for families who want to travel more for less using miles and points for seven years and now heads up TPG Family when she isn't exploring the world with her own two girls.
Delta SkyMiles® Platinum American Express Card