How Do You Fly in a Winter Storm? Pilots Explain How it Works 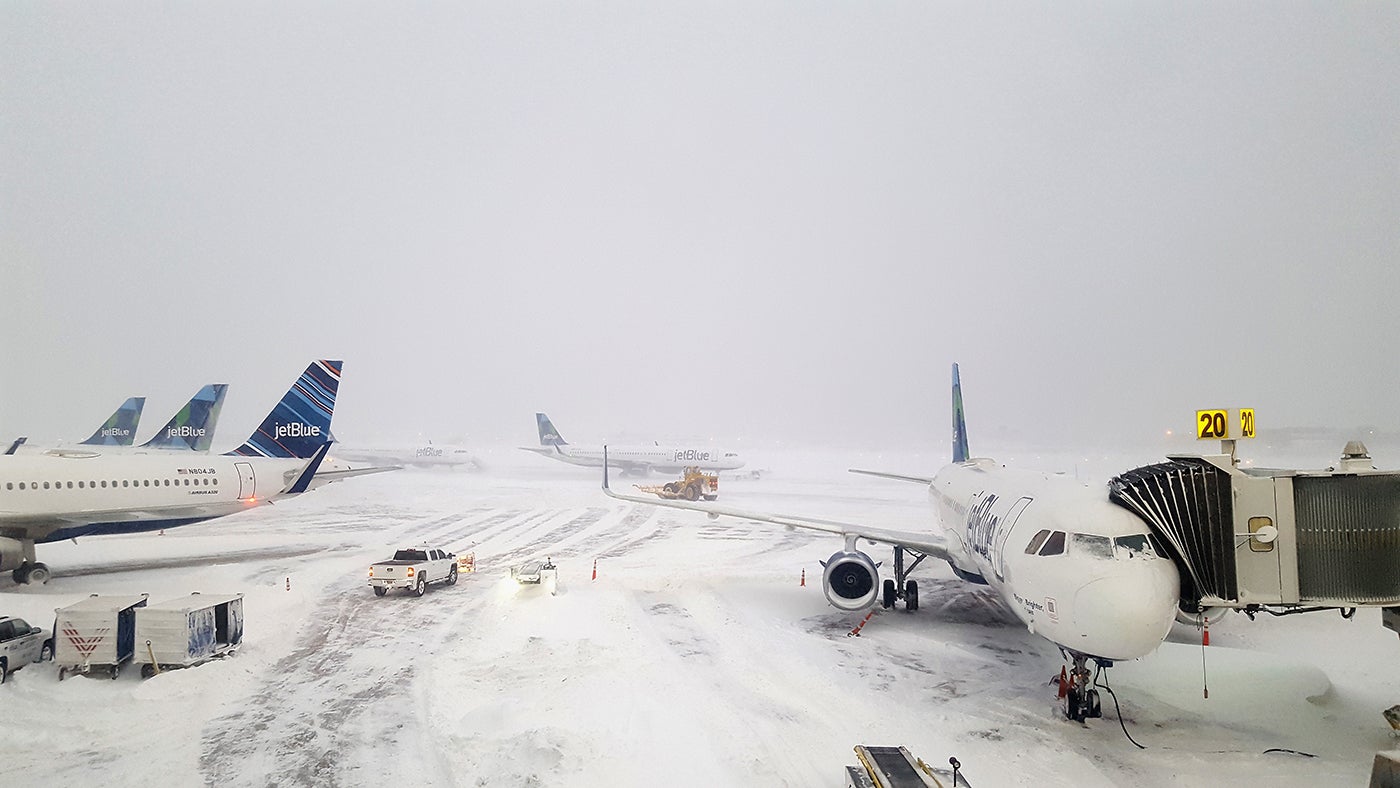 How Do You Fly in a Winter Storm? Pilots Explain How it Works
This post contains references to products from one or more of our advertisers. We may receive compensation when you click on links to those products. Terms apply to the offers listed on this page. For an explanation of our Advertising Policy, visit this page.

To hear some pilots tell it, flying through wicked winter weather is just another day at the office. “The operational and procedural aspects of it, from a pilot's perspective, are pretty standard,” said Patrick Smith, a commercial pilot, author and blogger. “Taking off or landing in a snowstorm can be challenging, but it's well within the boundaries of what we're trained for.”

But navigating conditions like this week’s East Coast bomb cyclone involves careful cockpit calculations, precise weather modeling, aircraft performance forecasting and intensive observation that passengers never see — that is, until their flight taxies, takes off and lands without a hitch.

“Everything boils down to safety,” said Eric Auxier, a Phoenix-based commercial airline pilot and blogger. “Planning for winter weather starts well ahead of time. If things are less than ideal, we’ll likely postpone or cancel flights. If the parameters look reasonable, we give it our best shot.”

Auxier walked TPG through how a pilot might manage takeoff and landing in the kinds of savage winter weather that effectively shut Northeast airports this week.

First, weather and ground conditions are strictly researched. Pilots consult hugely detailed tables and charts to determine how their aircraft will perform under different circumstances — a slushy runway, shearing winds or subzero temperatures, for example. The tables are created by each plane’s manufacturer after extensive testing. “The goal is to minimize surprises,” Auxier said.

Before a plane goes anywhere, de-icing is usually the first step. Special trucks spray the airplane with de-icing fluid: “The goal is to remove ice and retard it from forming,” Auxier explained. Manufacturer’s guidelines around de-icing “are pretty cut and [dry]," though “the ultimate discretion’s with the pilot,” he said. Icing is continually observed until a plane’s off the ground.

It’s worth noting that miscalculations around de-icing have led to disasters. Most recently, an Embraer EMB-500 Phenom business jet crashed on approach to Maryland’s Montgomery County Airpark because pilots failed to turn on the plane’s onboard anti-icing equipment, the National Transportation Safety Board found. “Pilots must rely on checklists and procedures because relying only on memory can have deadly results,’’ National Transportation Safety Board Chairman Christopher Hart said at the time. “The pilot’s failure to turn on the de-icing system in an icing situation proved to be disastrous.”

Once it pulls away from the gate, “a plane can slip and slide, just like a car. You want to go only as fast as conditions safely allow, and the worse conditions are, the slower you’ll go,” Auxier said. “The lower your visibility, the more careful you’ll need to be. You’ll also stop the plane before you do anything distracting, like running a checklist.” On a normal-weather day, Auxier said, pilots might simply multitask.

Approaching the runway, “you have to be extra-vigilant, proceeding with caution,” he said. “In snowy conditions, taxiway markings may get obscured.” Pilots always have airport maps in the cockpit, either paper maps or electronic versions on tablets or cockpit displays, “but most of us are familiar with any airport where we’re flying — though some airports are trickier than others.”

Once a plane’s ready to take off, calculations have already been made “far ahead of time,” Auxier said. “Since performance is degraded, you have to make sure there’s plenty margin of error. It’s usually along the lines of taking less of a load. In extreme situations, you may be forced to leave some passengers behind.”

After takeoff, “you can still have icing and hazardous weather conditions. We have the anti-ice and de-ice equipment functional and operating. We’ll give reports to Air Traffic Control about the rate of icing accumulation, and that kind of thing, so they can pass it on to the next airplane.”

Though touching down in a snowstorm might seem trickier than taking off, the procedure’s similar, Auxier said. “Any airport will clear the main runway before anything else, so it’s usually the safest and best-prepared part of the pavement,” he said. Still, “they’re constantly fighting snow that’s getting dumped. It’s up to you to continually judge whether it’s safe to land. We have to be aware of hazardous weather conditions to avoid, or to be prepared if conditions are deemed safe enough.” Auxier said pilots always keep a go-around in mind as well, the maneuver when a pilot aborts a landing, climbs up, circles around and tries landing again. In extreme cases, planes will divert to another airport.

Auxier’s account made us curious about the performance tests manufacturers run to compile tables and charts for pilots. We reached out to Boeing, where chief pilot Craig Bomben gave us some insight. How exactly is an aircraft evaluated for extreme winter conditions?

The tests address both the physics and practicalities of flying, from braking distance to enduring turbulence. The most dramatic weather-related test might be a “cold soak," where Boeing flies a plane to locations like Yakutsk, Russia — probably the coldest place on Earth you can fly into — to sit idle for 24 hours before getting restarted and tested. “That clears us to allow operators to go to locations where it’s extremely cold,” Bomben said. “We want to make sure our testing exceeds wherever they’re going.”

Boeing also tests its planes in locations where significant ice buildup can happen. “It’s not always easy, because you have to find those conditions,” Bomben said. “We drive around into parts of the country that other pilots are trying to avoid.” Test points under icing conditions include maneuverability, turns and stalls, Bomben said. The plane also gets re-tested after its de-icing system gets turned on. If it’s not possible to get an aircraft to an icy location, Boeing uses gargantuan “ice shapes” — basically, very large pieces of foam simulating ice buildup — to test its planes.

The result of all the testing is the system pilots use to determine factors like how much runway they’ll need to stop. “If you tell the system you’re approaching a slush-covered runway in freezing temperatures, you’ll get very particular information,” Bomben said. Newer planes can calculate this automatically, but on older aircraft pilots calculate this from printed information.

All of which reinforces Auxier’s points about safety. “That’s where every decision we make comes from,” he said. “We don’t do things to mess up your schedule or wreak havoc with your holiday season. It’s to deliver you safely to point B.”