Pegasus Plane Crash in Turkey, No Fatalities or Serious Injuries 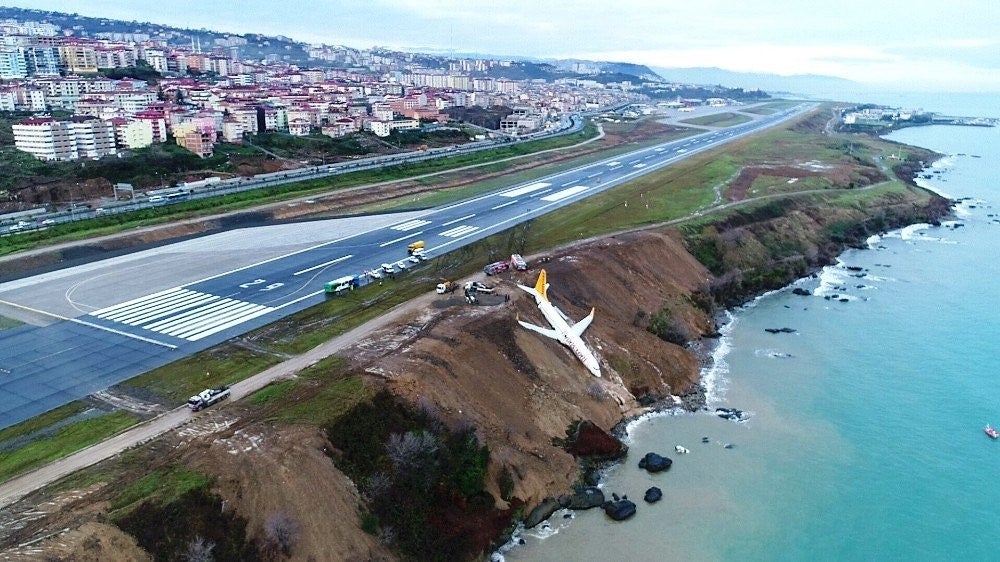 Pegasus Plane Crash in Turkey, No Fatalities or Serious Injuries

2017 was the safest year in the history of commercial air travel, with just 13 passengers perishing from two commercial aircraft crashes despite a number of other potential large aviation disasters. And it seems 2018 is following 2017's trend. Just two weeks into the year, we have had no deaths or significant injuries, but a pair of close calls due to a pilot lining up on the wrong runway in San Francisco (SFO), and a LOT Polish Airlines de Havilland Dash 8-400 landing on its nose in Warsaw when the nose gear wouldn't extend.

Saturday night brought yet another serious incident: a Pegasus Airlines Boeing 737-800 (registration TC-CPF) performing flight 8622 from Ankara, Turkey (ESB), to Trabzon, Turkey (TZX), veered off the runway on landing and slid down an embankment. All 162 passengers and six crew survived the crash, with only three passengers taken to a hospital for their injuries.

From skid marks on the runway and tire marks in the grass, it seems the landing was rather unremarkable until the plane took a sharp left turn just before the resulting accident site. The plane remained almost fully intact from the crash, with only the right engine breaking off from the aircraft and tumbling into the Black Sea.

The fact that the aircraft remained intact surely contributed to the fact that there were no serious injuries. Aerial footage shows the results of the crash:

While investigators are looking into exactly what went wrong, it doesn't seem to be the result of winds affecting the landing. Airport weather conditions noted just a 1 knot (1.15mph) wind around the time of the crash.

While the crashed aircraft remains on site, the Trabzon Airport was reopened early Sunday morning with the first arrival landing at 10:28am local time. In a Notice to Airmen (NOTAM), pilots have been informed that the wrecked 737 may remain onsite until January 29.