Married on an Airplane, By the Pope Himself 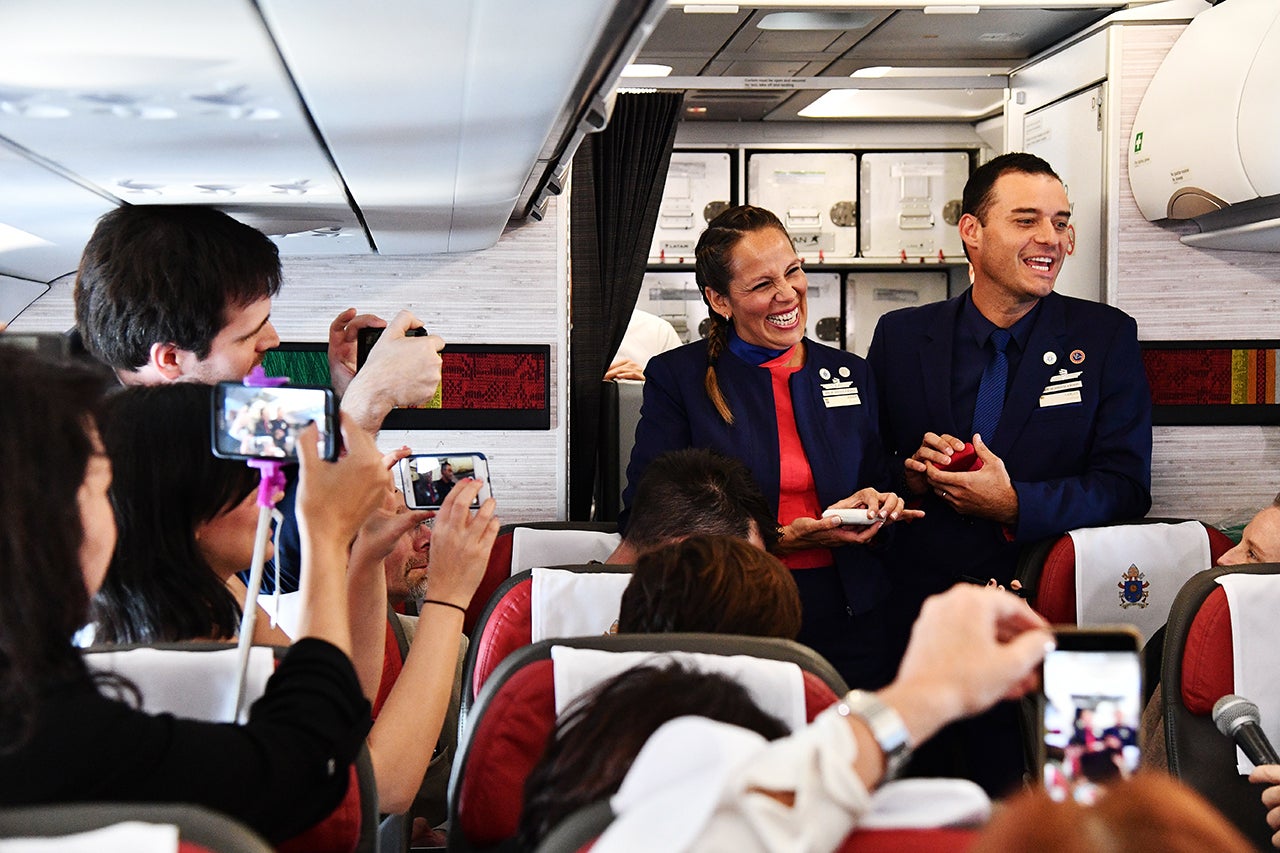 Married on an Airplane, By the Pope Himself
This post contains references to products from one or more of our advertisers. We may receive compensation when you click on links to those products. Terms apply to the offers listed on this page. For an explanation of our Advertising Policy, visit this page.

Something incredibly special occurred today. On a flight over Chile on Thursday, two flight attendants got married to each other — and that's unusual enough, but what makes it truly exceptional is who married them: Pope Francis.

The pope was onboard LATAM flight 1250 from Santiago, Chile (SCL) to Iquique (IQQ) — part of his South American tour. Among the flight attendants on the special chartered flight were Carlos Ciuffardi Elorriaga, 41, and Paula Podest Ruiz, 39, who approached the pontiff to take a photo as a couple.

Francis asked if the couple was married, and the two told them that they had planned to get married in 2010, but right before their wedding a massive earthquake hit Chile and destroyed the church where the ceremony was going to take place. Ciuffardi and Podest eventually had a civil ceremony in which they were legally wed, but the Catholic Church still didn't consider the couple married.

To the couple's surprise, Pope Francis asked if they wanted to get married right then and there, in the air.

The pope made sure that the couple was ok with a ceremony that would likely go viral — he then blessed their rings and married Ciuffardi and Podest, aboard the LATAM A321.

“He told me it’s historic, that there has never before been a pope who married someone aboard a plane,” the groom told journalists aboard the plane. The couple was met with applause from the cabin and held an impromptu press conference after being pronounced man and wife. The head of the Catholic Church said that the sacrament of marriage was missing in the world and that their marriage would hopefully encourage others to get married.

To make it official, LATAM Chairman Ignacio Cueto Plaza was a witness to the ceremony along with Monsignor Mauricio Rueda, a close assistant of the pope's. Rueda also produced a hand-written marriage certificate, signed by the pope himself as "Celebrant, Francisco" — his signature is in the lower right corner in the image below.

"We can't believe the pope married us," said Ciuffardi. "We have a Vatican document, it's all valid."

The couple has two children, ages six and three, and plan on having a "tiny honeymoon" when they return to Santiago. They met at work over 10 years ago and both hold the rank of chief purser, although they weren't operating as the pursers on this flight. Airlines usually place senior staff on papal flights due to the seriousness of the operation.

The flight number, LA1250, appears to be reserved for special LATAM flights. The two and half hour flight took off at 8:15am and landed 10:45am Thursday according to FlightRadar24.