These 9 Adorable Airport Therapy Animals Will Calm Your Nerves 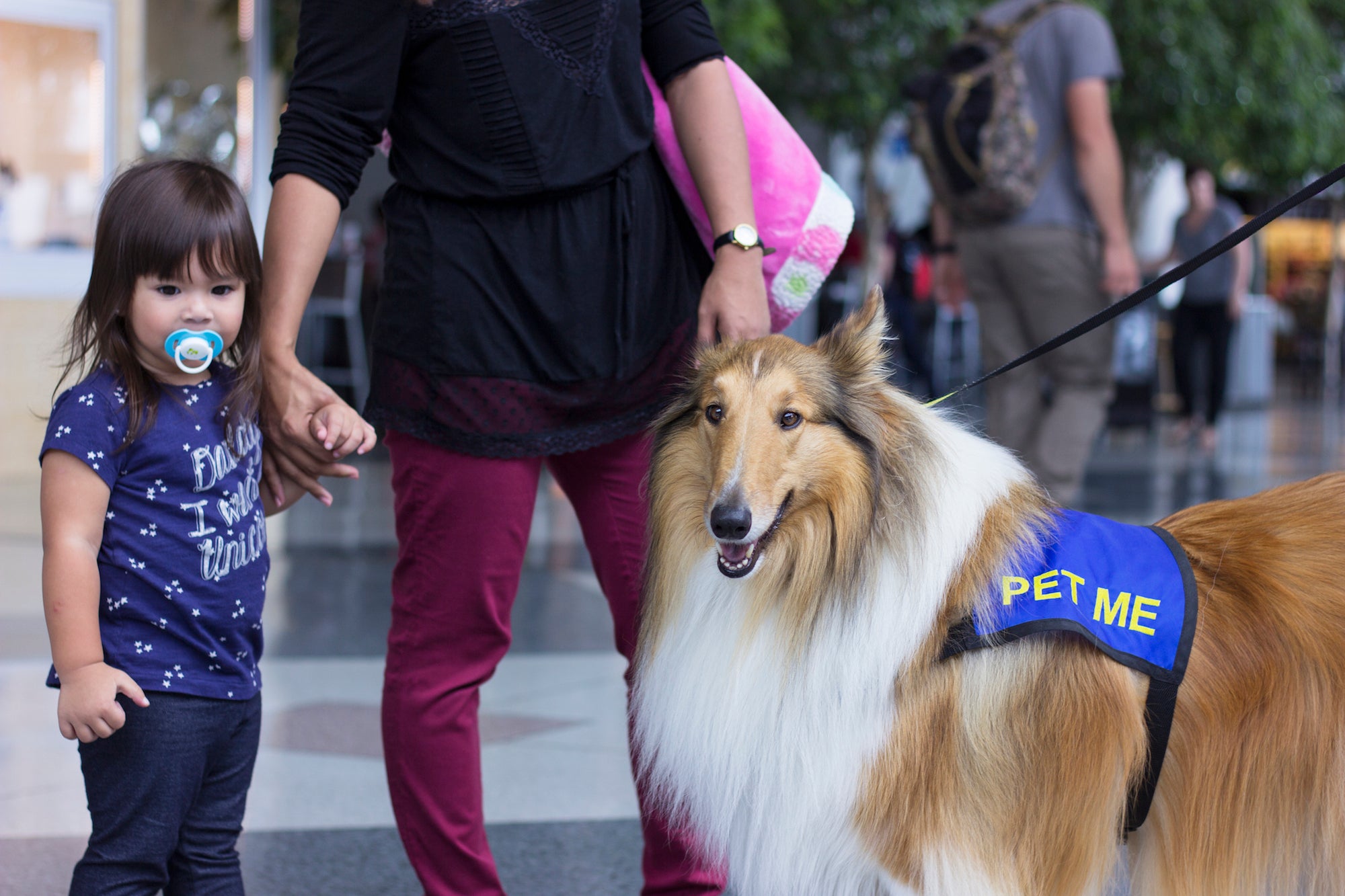 If you’re a pet parent, you know the only thing that feels better than being able to take your beloved four-legged friend on the road with you — and lots of hotels will accommodate you these days — is to see his or her fuzzy face upon your return. But when your own pets can’t be with you, there are plenty of airports that understand the therapeutic nature of a quick pet on the head of a friendly pup — or, say, pig. Here are 9 adorable airport therapy animals that you might encounter while traveling.

The airport therapy animal concept started gaining traction in America following the events of 9/11, with California’s San Jose International Airport (SJC) leading the charge. It was an airport pastor who kicked the program off when she brought her own dog to work with her to help calm travelers’ frayed nerves, and it’s only grown from there. Kyra Hubis, a retired nurse who runs the program, works with a team of volunteers to walk pups like Gracie (below) through the airport terminals to offer travelers the chance for a friendly pet.

Rather than simply wait and hope that a therapy pooch passes you by, passengers can go right to where the dogs are at Minnesota’s Minneapolis–Saint Paul International Airport (MSP). On October 1, 2015, Airport Foundation MSP — an organization that works to bring cultural activities to the airport’s terminals — debuted its Animal Ambassadors program, where a team of trained therapy dogs help calm frazzled passengers either before or after a flight.

“Just as people soften with the smile of a stranger, dogs can lighten a heavy mood,” writes the organization on its website. “Research shows that positive interactions with animals increase endorphins, oxytocin, prolactin and dopamine, the hormones associated with blood pressure regulation, pain relief, stress relief and joy.” And let's face it: the chance to take an adorable dog selfie doesn’t hurt either.

The CLT Canine Crew made its four-legged debut at Charlotte Douglas International Airport (CLT) in 2015 with a lineup of 15 dogs who greet passengers seven days a week. “We wanted a way to create a sense of place,” Lauri Golden, CLT’s manager of customer engagement — who has the pleasure of overseeing the all-volunteer crew of professional therapy dogs — told The Bark in 2016. “Our airport is a hub for American Airlines; 70 percent of traffic is connections, so the passengers just see the facility, not the city.”

Something tells us that one look at a little guy like McGrady — a deaf Australian Shepherd who understands hand signals — and you'll be planning a return trip to Charlotte (or at least its airport) in the future.

It only makes sense that “America’s Friendliest Airport” would want to employ a team of friendly pups to make that long layover fly by. In September, Phoenix Sky Harbor International Airport (PHX) announced its Navigator Buddies program, which offers visitors the chance to rub the bellies and scratch behind the ears of a talented team of pooches.

“The mission at Sky Harbor is to be America’s Friendliest Airport and deliver world-class customer service every day,” Phoenix mayor Greg Stanton said when announcing the program. “Our new Navigator Buddies will provide an even friendlier and furrier way to help people who have questions and reduce their stress levels as they travel.”

San Francisco is one of the pet-friendliest cities in the US, so it's no surprise that last December — three years after debuting its Wag Brigade of therapy dogs — San Francisco International Airport (SFO) introduced a new member to the team: LiLou, the world’s first therapy pig. And the skills she brings to her role as an airport ambassador are impressive: she can wave, shake, twirl and stand up on her back legs — and she does it all with a smile.

Given LA's reputation as a trendsetter, it’s hardly surprising Los Angeles International Airport (LAX) was one of the first airports in America to embrace the therapy animal concept. Its Pets Unstressing Passengers (PUP) program, which launched in 2013 with 30 teams of certified therapy dogs and handlers, now boasts a crew of more than 50 members.

“The dogs bring strangers together,” PUP director Heidi Heubner told The Bark. “We’re often afraid to talk, or are on our devices, but with the dogs, people are sharing stories and photos of their own dogs, talking about where they’re going. I never get tired of watching them. Sometimes my face hurts from smiling so much, watching them in action and listening to what the passengers are saying.”

It was only a matter of time, really. In what might now be seen as a bit of foreshadowing, Denver International Airport (DEN) launched its own therapy dog program in 2015: Canine Airport Therapy Squad, or CATS. In September, the airport welcomed its first non-canine member — a cat named Xeli (pronounced Zeelee), who spends a few hours each day hanging out on her cat tree and bidding travelers bon voyage.

“We’re really excited to have [Xeli],” airport spokeswoman Daria Serna told The Denver Post. “We know there are a lot of people who love cats just as much as people who love dogs. It will be great have her on the concourse visiting people and making people smile. She loves to meet people.”

Feeling anxious before a flight is common. Getting to play with a miniature horse in order to ease that anxiety is not. But thanks to a few of the adorable residents of Hamilton, Ohio’s Seven Oaks Farm, travelers making their way through Cincinnati/Northern Kentucky International Airport (CVG) can spend some time bonding with some scaled-down equines.

At Michigan’s Gerald R. Ford International Airport (GRR), the Gentle Fur in Action program works with West Michigan Therapy Dogs, Inc. to station teams of certified therapy dogs and their handlers throughout the airport. With canines at the ready in the waiting area, baggage claim, concourses and gates, both arriving and departing passengers have a chance for a cuddly encounter. (They also make a great distraction for kids on-the-go.)