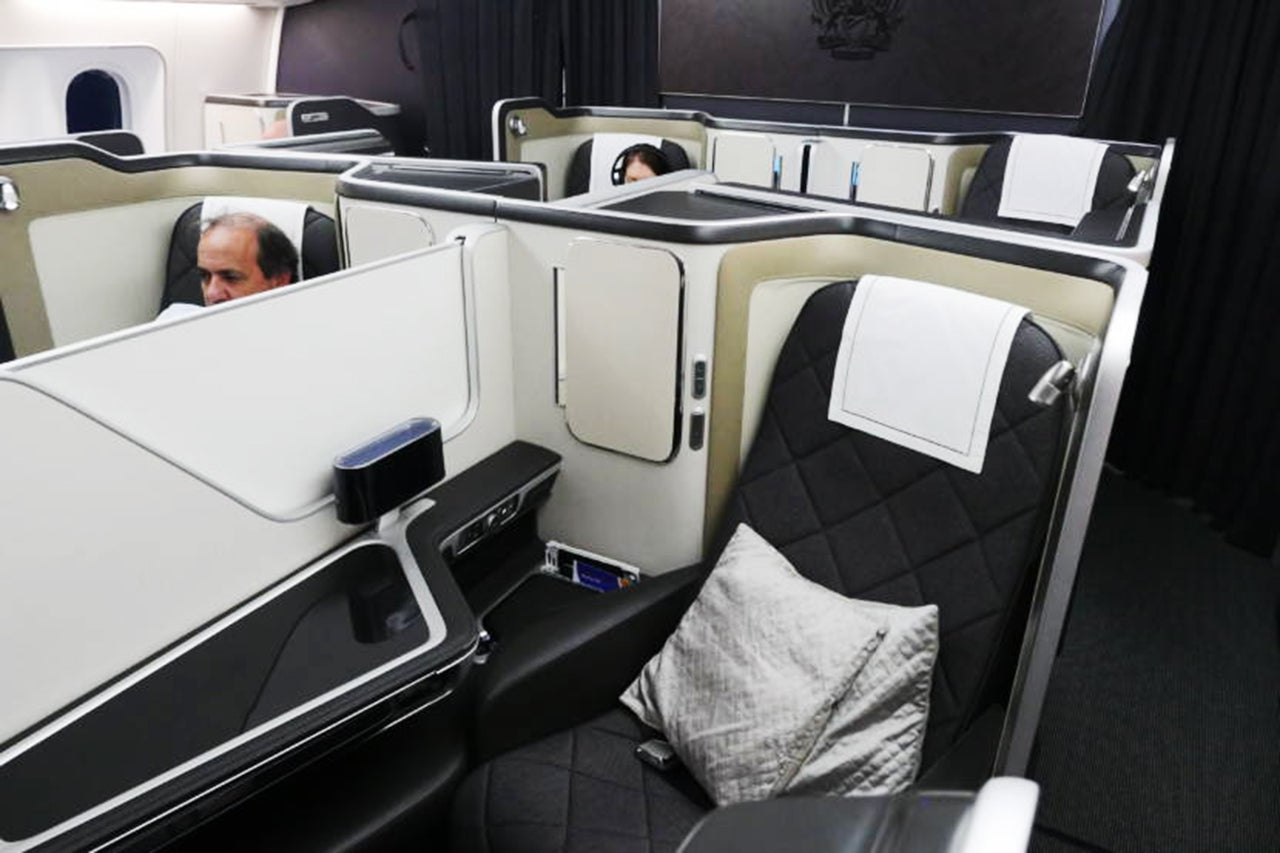 When British Airways introduced its longest-ever nonstop route earlier this year, from London Heathrow (LHR) to Santiago, Chile (SCL) — more than 14 hours in flight — my inner traveler and AvGeek self got rather excited. As a birthday gift to myself, I decided to cash out a heap of Avios and use a reward voucher to experience this ultra-long-haul route on my inaugural visit to South America.

The thing that’s really attractive about this LHR-SCL route is simple: British Airways is the only carrier to offer a direct route, with no need to connect from the UK. And convenience, for many, is king. Additionally this new route is operated by BA’s newest plane, the four-class Dreamliner 787-9.

So is BA’s latest first-class product the best that the long-haul network of Britain's flag carrier has to offer?

Booking a first-class seat was only realistically accessible using Avios. However, as I fly on oneworld partner airlines a fair amount — mainly British Airways, with some Cathay Pacific and Qatar — I’m fortunate enough to have accrued a lot of Avios over the years.
And, boy, did I need them to make this booking: The return journey cost 238,000 Avios plus £564.57 ($730) per person in taxes and BA's famously high redemption fees.

To take a plus-one I used a two-for-one BA American Express voucher, which I had acquired through a £10,000 ($12,940) spend on my British Airways American Express Premium Plus credit card over the course of 12 months. The card has a yearly fee of £195 (about $250), rewards three Avios per pound spent on British Airways' own product or 1.5 Avios per pound for non-BA product. The card is only available for those with a UK address. Plus, spend £3,000 (approx $3,882) in the first three months after opening an account and there's a 25,000 Avios bonus reward, for the first year only.

The two-for-one voucher can only be used on BA aircraft departing from the UK, which is potentially restrictive. Plus, higher cabin classes have limited seat redemptions available per flight, so they can be even more difficult to book. Furthermore the tax from UK airport departures is higher than almost anywhere in the world, hence my total came to £1,129.14 ($1,461) in taxes and fees.

With a 9:55pm departure from Heathrow, I was able to work a full day before cramming myself on the London Underground. I had to squish my face against the window of that sweaty carriage for almost an hour, repeatedly telling myself that my imminent luxe suite in the sky would make it worthwhile.

We arrived at Heathrow with plenty of time to spare, at 5:50pm, keen to make the most of the whole experience. First-class passengers were able to enter the airport through the First Wing, a designated area to the far end of T5 exclusively for First and BA Executive Club Gold (oneworld Emerald) customers. It opened in April 2017 and made for a far slicker entry into Heathrow T5A, thanks to two security lanes and a back door to the First Lounge.

Because we were flying first class, we could access the Concorde Lounge, British Airways’ premier product, complete with an a la carte restaurant, bookable cabanas for sleep, plus top-shelf champagne, wines and spirits. The Galleries First lounge was also accessible, but the Concorde Room is open only to passengers actually flying first class on BA or another Oneworld alliance carrier, or to those who hold a Concorde Room card, with one guest allowed.

We passed through the First Lounge at 6:10pm, grabbed a shower without the need to wait, then slipped into the Concorde knowing we had around three hours to spare. Perfect timing to grab a drink at the bar (the Laurent-Perrier Grand Siècle Champagne was exceptional) along with olives with feta-style cheese.

The lounge had a posh bistro-pub feel about it and wasn’t too busy. After 7pm we sat down for dinner in one of the private booths at Concorde Dining, each of which sat no more than two people comfortably. It was cozy for a duo, though, and private enough.

We shared a rabbit-pork-and-prune terrine, medium-rare aged ribeye and cheese plate. It was all delicious, but we had to ask for bread.

There was free Wi-Fi, which was easy to connect and delivered a decent sustained speed.

Heathrow Terminal 5 is huge. So large, in fact, that almost all long-haul passengers need to board an internal train to move between T5A and either B or C satellite terminals.

That’s what we had to do: With about an hour to spare prior to boarding time, and aware of the advised 20-minute transit time, we headed over to T5C, which had no lounge. The lack of a lounge at T5C is something BA really needs to rectify.

Boarding was quick, and we were escorted to our seats by individual cabin crew.The 787-9 has the fewest number of First seats of any British Airways aircraft, just eight in two rows in a 1-2-1 layout (not 14 seats over four rows as with other BA First cabins).

My seat, 2E, was large and comfortable. With 72 inches of pitch and 22 inches of width, there was a lot more space than in an equivalent Club World seat. It was the best lie-flat sleeper seat I’ve ever had on a flight: far more comfortable than American Airlines, far more spacious and private than Virgin Atlantic's Upper Class seat.

I managed a full seven hours of uninterrupted sleep on this flight, more or less unheard of for me. It was blissful, aided by a roll-out mattress and separate duvet. However, I would have liked the cabin a couple of degrees cooler.

The plane interior looked generally good, but it seemed that BA had cut corners with the 787. I’m sure it looked pristine off the production line, but the cabin had forgone some more sensible fittings and materials choices. The side table was rubbed through to its edges after only 20 months. The light fittings also fell out of seats 2E and 2F, which was ridiculous (though it netted me 5,000 Avios in apology from the cabin-service director). Sure, the 787-9 does a lot of miles — that particular week my aircraft had been to Delhi, Kuala Lumpur, Tel Aviv and Shanghai as well as Santiago — but how would it look in another 20 months?

This new First seat also featured BA’s updated control system, which was smaller, neater and less distracting than the previous generation's version (think A380), with a convenient central control wheel.

Power was obviously available for every First passenger, with the electrical socket in my side storage area. Two low-power USB charging sockets were also available. Other storage areas included a deep bin adjacent to the footwell, a dedicated vanity cupboard with mirror, and a dedicated wardrobe with one hanger.

The individual 23-inch screen felt huge, delivering a theater-like experience, though the media on offer lacked the resolution to match this scale. The updated wired IFE controller was easy to use.

The amenity kit included a comfortable eye mask, earplugs, lip balm, moisturizer, socks and a pen. Best of all were the pajamas, a big part of the reason I slept so comfortably for such a long period.

The one bathroom available in the First cabin was rather small, basically the same size as those found in economy. It featured Aromatherapy Associates hand wash and moisturizer, plus flowers.

There was no Wi-Fi on any of BA’s fleet when I flew, which I actually found great: I could fly for the majority of a day with zero interruptions and have a true escape.

When it comes to in-flight food I never really expect that much, and the food on this particular flight didn't change my mind: For all its pompous appearance and ingredients list, the mains tasted like dishes from Club World, BA's business class, that had been arranged more prettily on a plate. That was certainly the case for my main of sea bass with fennel and cucumber relish, and the lobster mac and cheese was ruined by a lobsters so overcooked it made me wonder why I bothered.

The starters and desserts were where the food worked: The beignet to start was complex and exciting, and the warm chocolate-and-cherry tart that ended the service was cake-soft yet tasty. The cheese plate included a lovely blue goat cheese.

What British Airways did particularly well was the drinks service, and it was never a bother to get a drink at the press of the call button. The wine list was unrivaled by almost any of BA's competitors, so if you enjoy drinking £130-a-bottle ($168) Laurent-Perrier Grand Siècle without the per-glass cost, then BA First is the place.

With service, though British Airways is always hit or miss. As we had chosen seats 2E and 2F in the middle of the cabin, we were served by two different staff members, one designated for each side of the plane. My assigned crew member barely cracked a smile and wasn’t anywhere nearly as thorough as the crew member on the opposite side of the plane. Brown sauce with breakfast? Offered on the right-hand side of the plane, but I had to ask for it. I also had to hit the call button to get my breakfast plates taken away, after they had been sitting there empty for about half an hour, while the other side of the plane was clear. There were only five passengers in the cabin total, so it shouldn't have been like that.

Speaking of breakfast, the cooked full English was as tasty as could be for in-flight food. Sausage, bacon, beans, a stuffed mushroom and hash browns were all great, though the eggs could've used salt. The pancakes were sweet and pretty tasty.

Before landing, the crew acknowledged my birthday with a takeaway bottle of champagne, which goes to show that a lot of BA staff members are great.

Coming in for a landing over the Andes at around 7:00am was a sight to behold.. Being well-rested and staring over the sun-licked peaks brought a feeling of wonderment

Would I book this route again? Without a doubt (well, pending a lottery win or another 238,000 Avios). Flying in first class made this 14-hour journey feel like a seven-hour one. It was that comfortable. Despite the service misses, none of which were truly crippling, BA First on the 787 was a very pleasant experience.

The obvious hurdle was the prospective cost. The 35 Club World seats behind First would have offered a decent option for around half the cash price, but I would pay to upgrade if available, as this route's First cabin makes it worthwhile.