Articles
Jordi Lippe-McGraw is a writer covering travel, family, food and wellness for outlets like Conde Nast Traveler, Travel + Leisure, the New York Times, Forbes, and more. She has traveled to more than 30 countries on all 7 continents (including Antarctica at 5 months pregnant) and is an avid puppy, penguin, and truffle lover.
Follow
Dec. 07, 2017
•
6 min read 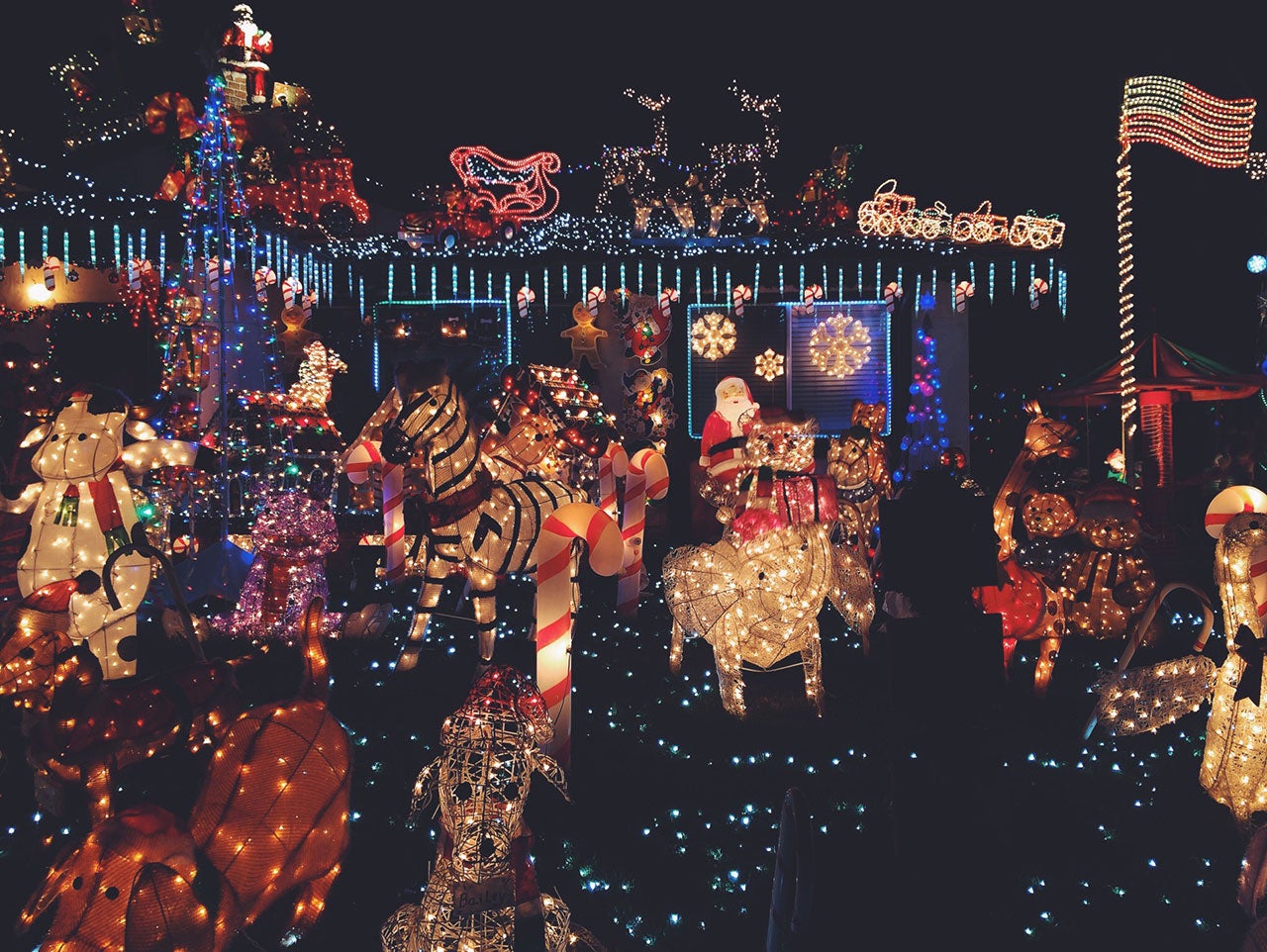 Nothing marks the holidays quite like over-the-top lights displays — and no, we're not talking about your zany neighbor who's done up his house, National Lampoon's Christmas Vacation–style. While families over the world will adorn their homes with holiday decorations, these 11 neighborhoods become destinations in their own right this time of year, all thanks to the sort of next-level displays that come with an exorbitant electrical bill.

The Caretta Shiodome attracts locals and visitors daily to its collection of stores and restaurants set among towering skyscrapers. But during the holidays, the modern complex transforms into a futuristic light show featuring 250,000 LEDs. This year’s show will have a Beauty & the Beast theme, completely with candle-inspired décor reminiscent of a banquet hall.

A light show and fireworks display in one? No wonder locals and tourists flock to Copenhagen's Tivoli Gardens each year. Since opening in 1843, the location has been known for its famous Christmas market and now features extravagant light shows as part of the holiday celebration. But that’s not all. There will also be fireworks displays held on Dec. 25, Dec. 26 and New Year's Eve.

At Ayala Triangular Gardens in the Philippines, hundreds of rain, golden, and fire trees create the perfect backdrop for more than 1.6 million tiny LED lights, which sparkle in sync with holiday music. The overall effect? A busy business district is transformed into a twinkly enchanted forest.

The iconic street, which is home to the Arc de Triomphe, is lined with 200 trees that all twinkle with hundreds of LED lights. They change color over the course of the evening, shifting from white to purple to red. Try to get a view from above, where it looks like the streets are dancing.

Lane of Light in Gothenburg, Sweden

Gothenburg doesn’t just light up a few trees or a single park; rather, the second-largest city in Sweden illuminates an almost two-mile long stretch. The Lane of Light, as the route is called, goes from Gothenburg’s harbor to the Christmas market at Liseberg Amusement Park, fanning more than 5 million lights over buildings and 700 Christmas trees.

Niagara Falls is already one of the world’s most impressive sites, but it gets even more dazzling around the holidays, when the Winter Festival of Lights spreads 3 million colored lights over four miles of Ontario’s Niagara Parkway. During this time, 120 animated themed displays, fireworks and, of course, the Falls are all grandly illuminated.

In Medellín, Colombia, Christmas lights consume the whole city. Although the holiday festival is concentrated along the Medellín River and La Playa Avenue, there are more than 100 other spots around the city that also participate, bringing the total LED count to a whopping 31 million.

Saint Augustine’s annual lights festival pays homage to the centuries-old tradition of putting candles in windows at Christmastime. Today, instead of candles, 2 million bulbs are strung throughout the 144-square block historic district, where they remain for two months. According to a city ordinance, all of the lights must be white, creating an especially dazzling glow.

Hong Kong goes hog-wild over the holidays, with displays every white way. Main Street in Disneyland is done up in twinkling lights, Victoria Harbor (and the whole skyline) is lit up and a larger-than-life Swarovski crystal tree holds court in the city center.

The Fantasy in Lights display at Callaway Gardens, part of a resort in Western Georgia, is so big you can only drive through it — either in your own car or aboard the Jolly Trolley — to glimpse the 8 million lights, which are programmed to sparkle to Christmas tunes. It’s so popular among Southerners that the hotel offers special overnight packages geared toward lights-peepers.

The Rockefeller Center Christmas tree and shops along Fifth Avenue might get all of the buzz around the holidays, but Brooklyn might just have the city's most colorful Christmas spectacle. Since the 1980s, homeowners in Dyker Heights have competed for who can put up the most spectacular display — think giant Santas and every color light imaginable. The best viewing spot is between 11th Avenue and 13th Avenue from 83rd to 86th Street, and the Polizzotto house, with its motorized wooden toy soldiers, is always a favorite.

Related stories
What are points and miles worth? TPG’s December 2022 monthly valuations
Capital One Venture X to lose Priority Pass restaurants and spa services as of Jan. 1, 2023
December 2022
Current Hyatt promotions: Bonus points on stays and dining plus double stay credits
Featured image by Photo by @nikmock via Twenty20