With New Ex-Delta CEO, Amtrak Is Remaking its Train Seats 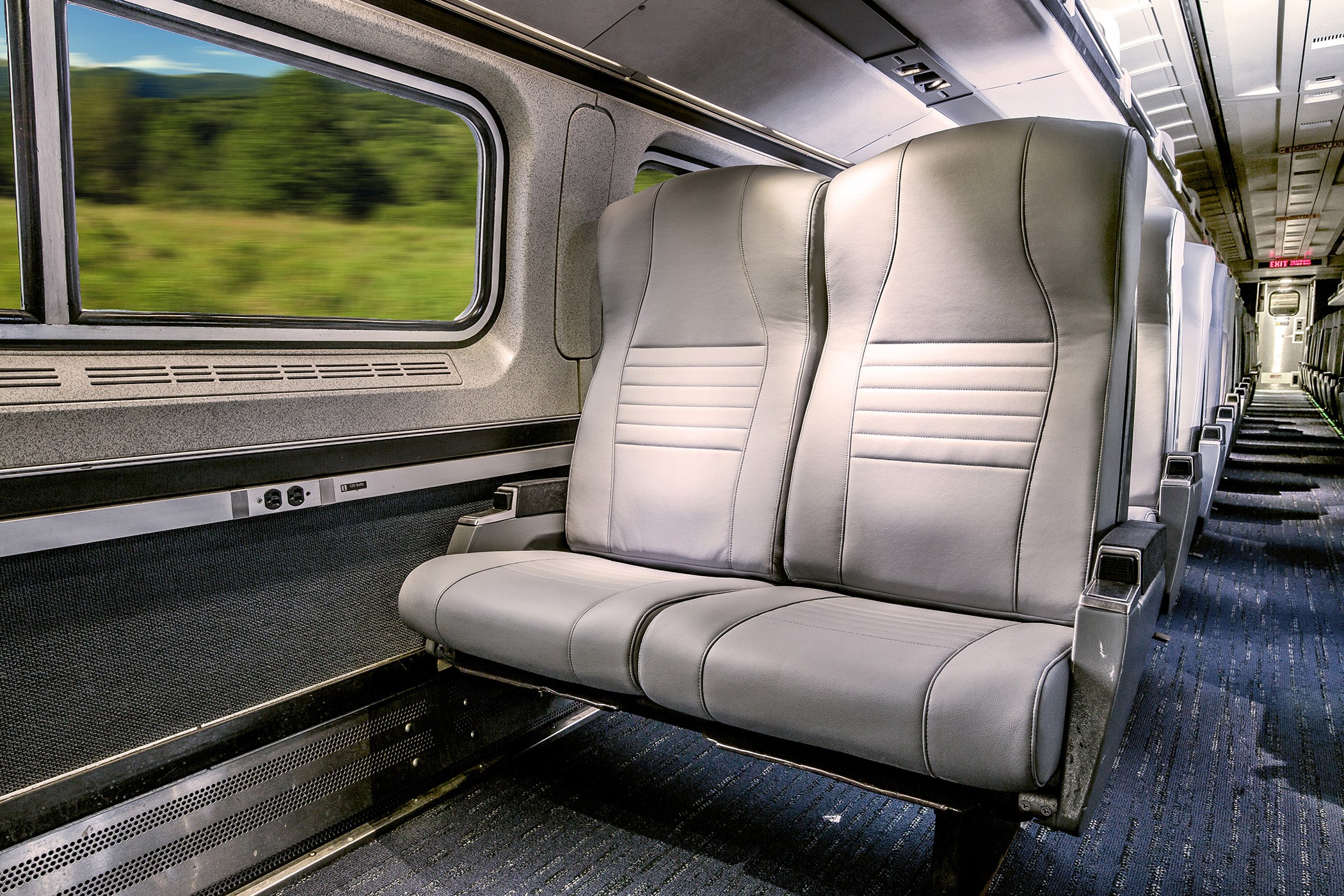 With New Ex-Delta CEO, Amtrak Is Remaking its Train Seats
This post contains references to products from one or more of our advertisers. We may receive compensation when you click on links to those products. Terms apply to the offers listed on this page. For an explanation of our Advertising Policy, visit this page.

The last time Amtrak undertook a major renovation of its train interiors, more than two decades ago, the project became a nine-year slog.

But that was before the reign of Richard Anderson, the former Delta CEO who joined Amtrak’s C-suite in June.

“Our new boss said nine years is too long,” said Alison Simon, Amtrak’s director of passenger experience. “So we had to choose items we could literally swap out and install overnight.” After a three-stage renovation, the fully refreshed trains will roll out by summer, Simon said.

In the just-completed first phase, Amtrak replaced old incandescent lights with energy-efficient LED lighting, and upgraded its restrooms with a gray-and-plum color scheme and potent deodorizers. The second phase, underway now, will replace seat cushions and carpets. Stage three will swap out worn-looking white bulkheads for speckled blue high-pressure laminate that should hold up to abuse much better.

Both business and coach-class cars will get the full treatment by summer, though in different color schemes. Coach will be in all grey, while business will have blue accents.

Though he didn’t have a direct hand in the new cars’ design, CEO Anderson’s fingerprints are all over the new cars. Amtrak’s new seats, which look and feel like a major improvement, take their cues from airline seats in design and construction, with a wider cushion, more headroom, and lumbar support designed for less jarring rides. New synthetic leather seat coverings come from Fellfab, the Canadian “engineered textiles” maker that also redid Delta’s seat cushions.

(That is not the only aspect where Amtrak is resembling airlines more and more. Even before Anderson joined, bringing with him airline-style practices, Amtrak had switched to a revenue-based rewards program. Incidentally, TPG's editor at large Zach Honig is a fan of the Amtrak Guest Rewards World Mastercard, which he included in the roundup of his 2017 credit card inventory.)

At a media preview aboard a stationary train on track 10 at Manhattan’s Penn Station, Amtrak director of industrial design Duncan Copland gave TPG a tour of a refreshed car.

“Seating is the primary focus,” he said, settling into one of the spotless navy-blue-and-grey seats in a refurbished business-class car. Coach cars will get solid grey seats, still within the official Amtrak palette. “Seating’s the first takeaway for passengers, not to mention that you’re sitting on it for what can become hours.”

Seatbacks are composed of a 1/4-inch core of laminated foam enveloped by “a Kevlar-type material” and covered in the new synthetic skin. With its new configuration and a slight curve to its backing, the new seating feels like it accommodates the body more completely than Amtrak’s notoriously dodgy old seats.

“The new structure helps with comfort, but also with maintenance,” Copland said. “And the synthetic leather makes it easier for passengers to perceive that a seat looks clean.” Amtrak had been spending $1 million every year just to keep its cloth seating presentable; maintenance costs for the tougher new coverings should shrink considerably. “Getting two years out of cloth is considered good,” Copland said. “We’re expecting a 25-year lifespan for the synthetics.”

For all new components, Copland and his nine-person, Wilmington, Delaware-based team subjected materials to brutal tests. “When you get on a train, you get movement. People slam doors. It can be rough. Our designers would bang on everything to try it out,” he laughed.

The Amtrak color palette carries through to new carpeting, a rich cobalt blue with silvery metallic threads that’s both elegant and subdued. The old nylon 6 carpets, which wore quickly, have been replaced by new-generation material called nylon 6.6, “believed to provide exceptional resistance to crushing and matting, heat and friction, and stain penetration,” according to manufacturer Antron.

With the new design, Amtrak’s hoping to catch up after years of complaints from customers, and increased competition from more sophisticated bus companies. “We needed to up our game,” said Simon, the director of passenger experience. “Passenger expectations have changed. They’re expecting more comfort and more tech.” Simon credited Anderson for moving forward on the refresh. “The fact that it took us 20 years is all you need to know,” she said.

A few of the refreshed trains have already hit the tracks. But at least one regular Amtrak rider wasn’t convinced. “I’d rather they spend the money on maintenance,” said Rebecca Shapiro, a teacher who commutes between Baltimore and New York on the Northeast Corridor line. “Late trains are a much bigger deal. Since my passenger experience depends very little on the feel of the seat, it can't really have a big effect.”

In fact, Shapiro said she’ll miss the old seating. “I actually like the cloth seats better,” she said. “It could be that they are more lived in, but they have more give. The new seats are stiffer and firmer and don't feel as relaxing.”

The refitted cars are part of an overall upgrade at Amtrak. In June, the rail company unveiled next-generation Acela trains, powered to travel at 160mph instead of the maximum 130mph Acela speeds. The rail company will partner with French transportation giant Alstom to produce 28 souped-up Acela trains, all expected to hit the tracks by 2021. And last year, Amtrak’s old Arrive magazine was relaunched as The National, with think pieces and portraiture from high-profile photographers and writers instead of conventional destination stories.