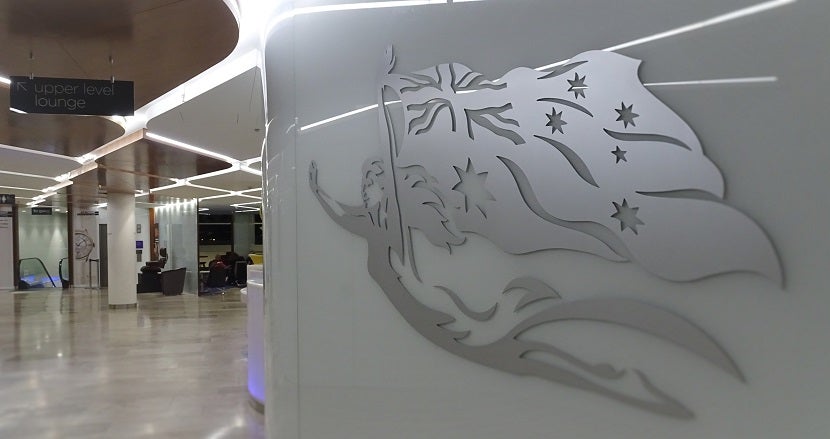 Until earlier this year, Virgin America operated a Loft at LAX, while Virgin Atlantic offers a handful of Clubhouses in the US and around the world. With a less playful name, I couldn't help but wonder if the Virgin Australia Lounge would measure up — if the Sydney location is any indication, not only does it keep up with its counterparts, it raises the bar.

Shortly after clearing security in the domestic terminal at Sydney Airport (SYD), you'll spot signs for the Virgin Australia Lounge. Easy to find, the small entryway and staircase leading to the front door give no indication of the size and splendor that await inside.

I didn't know if I'd even be able to get into the lounge since I have no elite status on Virgin Australia and I was flying in economy at the time. The lounge was not listed when I searched for properties I could access with my Priority Pass or Lounge Pass memberships, but I was so weary from a long day of travel and still had a three-hour layover so I figured it was worth investigating.

Inside, no signs were posted as to what cards granted access, so I asked the agent behind the check-in counter. She proceeded to enumerate a litany of allowable airline statuses — none of which I had — then patiently cycled through a catalog of credit cards, mostly from Australian issuers. I stopped her mid-list when she said “American Express Platinum Card.”

I produced my Business Platinum Card® from American Express and our boarding passes — I was traveling with a friend — and the agent cheerily entered the information and showed us in. We were told that flights would be announced and we were, in fact, notified at 9:27pm of our 10:00pm flight.

The lounge is huge. Turning a corner, I saw seating area after seating area — chairs and small tables, stools and bars — and it didn't seem to end.

Later, I was told the lounge could accommodate about 1,000 people — and did so the previous week when storms had grounded all outbound flights.

With only one flight left to depart the night I was there, I counted about a dozen passengers enjoying their considerable space with no need to open the entire separate section upstairs, which handles the overflow. I was especially appreciative that the lounge stays open until the airline's last flight is called for boarding — my biggest pet peeve about many lounges in the US is when they don't do this.

Throughout the lounge, I found all the style I'd come to expect from a Virgin-branded aviation experience, including modern curved lines, mood lighting and ambient electronic music. Even the ceiling looked fantastic.

Private showers were available in all bathrooms and although a shoe shine station was set up, it was unattended at this hour.

A small business center offered computers and an out-of-order printer. Throughout the lounge, it was easy to plug into the power outlets. The free Wi-Fi clocked in at a decent 6.89/6.97 Mbps.

Unlike most other lounges I've seen, a separate escalator deposited passengers directly from the lounge back into the terminal. Personally, I would have preferred the escalator to take us up into the lounge, but still, it was a nice touch.

All the food and beverages in here are complimentary, and most items are presented along one long and wavy bar, with a few treats tucked away elsewhere in the lounge. Keep an eye out for the enormous pit of dark chocolates alongside the lounge service desk.

Everything is self-serve, save for the custom coffee bar and beer.

If you're thirsty, this lounge is the place to be. Six flavors of soda in the fountain sat next to eight wine offerings — four each of red and white.

Two beers on tap are backed up by large refrigerators with dozens more in bottle form. This almost makes up for the absence of liquor.

The food was anchored by a selection of salads, fruit and soup. A menu promised hot food but unfortunately not at this late hour.

At one end of the bar were chips and popcorn. At the other, toasts and spreads.

And of course, since it's Australia, Vegemite.

The food tasted fresh and flavorful, and while nothing here would qualify as a main course, it did suit the needs of a weary traveler.

Not only are the architectural lines clean, but the place itself is clean, too. The food counters were spotless and aside from the broken printer, everything seemed to be functioning properly.

The service was friendly, even when things got a little tense. An agent came to my seat to ask if I had been taking photos (I was), saying she was concerned that I had been leaning over counters (I wasn't) and was worried that I'd captured sensitive passenger information (I hadn't). A minute later, she asked to see the photos in my camera as a security measure. I complied and she thanked me for cooperating. Later when we left, she asked, “How did you like our lounge?”

I liked this lounge a lot. I'd hate to be here with 1,000 other people, but for a recharge during a long travel day, the Virgin Australia Lounge at Sydney Airport was an unexpected and much-appreciated delight. I'd stop there again every time I could — and maybe leave the camera in the bag.

Have you visited the Virgin Australia Lounge in Sydney? Share your own experience with us, below.

Related stories
Chasing elite status on Alaska Airlines? A flight to California this fall could help
Flights to Auckland starting under $700 round-trip
The ultimate guide to earning elite status with United cards
American Airlines forgot it had landing slots at JFK. Then it lost some of them
Featured image by The Virgin Australia Lounge at Sydney Airport makes quite an impression.