How to Pack Fragile Items in Your Checked Luggage 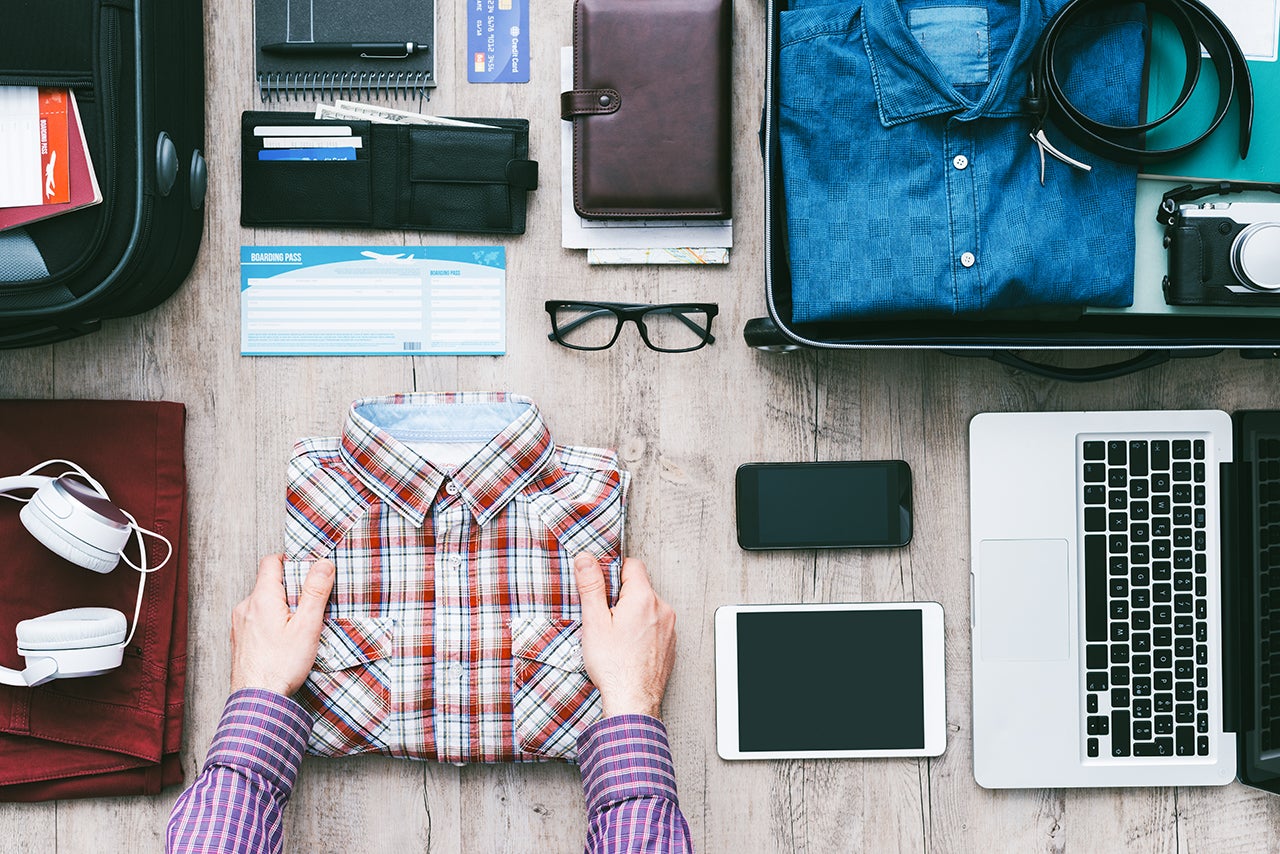 Bag throwers: the bane of countless bottles of French wine, fine crystalware and unique musical instruments. Whenever you have fragile booty to bring back home, it often seems like there's nothing to do but rely on prayers and a week's worth of dirty socks — and, more often than not, all you get for your efforts when you get home is a ruined suitcase and 300 euros worth of broken glass.

So how do you pack your checked luggage to make sure your most delicate baubles make it back home in one piece? We asked two sets of packing experts — the TPG editors and writers and a professional fine-art shipper — and compared notes. Then we talked to a professor at the California Institute of Technology to find out what science says works, and why.

What the Professional Travelers Do

For the staff and contributors at TPG, it mostly boiled down to the packing material. For contributing writer Lori Zaino and editor Jane Frye, for example, bubble wrap is king.

"For my sister's wedding gift, I emptied my bank account on a large bicycle sculpture made of copper wire that I found in a vintage shop in the East Village," Frye wrote. "We wrapped it in bubble wrap (very official), taped it up with masking tape, and off I went on my way to the airport with my surfboard-sized package. Two Bloody Marys later, I stood in O'Hare as the precious gift drifted my way across the luggage carousel — in one piece, to boot! The sculpture survived the experience, and so did I. Barely."

Points-and-miles writer JT Genter and managing editor Alberto Riva both said they make do with dirty laundry, stuffing hard containers with undies, socks and the like to keep their precious contents from moving around too much. The difference in their approaches lies in the size of the containers: While Riva generally counts on a hardshell Samsonite to take the worst blows en route, Genter once actually bought small wooden boxes that fit into his backpack to ferry two bottles of wine he bought in Cape Town, South Africa.

"Through connecting in Johannesburg, Abu Dhabi and New York, we reached Austin and were thrilled to see the hacked-together plan worked," Genter said.

The most improvisational method came from editor Nick Ellis: "I'd carry my fragile items with me in my backpack, wrapped up in paper, if I could find any (from a grocery store, for example)," he wrote.

What the Professional Shipper Does

Steven Freifeld is owner of Arrow Express, a New York-based shipping service that specializes in fine art, antiques and extremely fragile items in unusual shapes and sizes. His clientele consists mainly of museums, auction houses, art galleries and art dealers and collectors. He, too, emphasized the packing material, but with a couple key additions. For one, he suggested that nonprofessional packers make do with the materials they'd normally find on hand at the end of a trip — he championed Riva and Genter's dirty-sock solution, for example.

"Use the more cottony materials, like socks, towels and T-shirts, and lay them down and roll them until they become bulky and solid," he said.

He also said where the item goes in the suitcase is important: "Stuff that in the middle as deeply as possible, further out from the corners, where it runs the risk of getting dinged when it's tossed."

But the most common mistake travelers make when packing breakable items, Freifeld said, is somewhat counterintuitive.

"It's wrapping it too tight," he said. "When you wrap something too tight, it may actually put pressure on it. It should be snug but not restrictive."

The Physics of Packing

Jose Andrade, professor of mechanical and civil engineering at Caltech, is a lead researcher in the field of materials physics, and specifically granular materials, especially when it comes to how discrete items begin to distribute kinetic energy as a single large object when pressure is applied to them — which is how all the individual items in your suitcase perform whenever a baggage handler at ATL tosses your American Tourister onto the conveyor belt ... and misses.

There are a number of different forces at work when your checked luggage travels, but there's really only one that you have to be concerned about when it comes to whether, say, a bottle of wine makes it to your destination in one piece: shear force, or shearing stress. Imagine that you've got a peeled orange and are holding in both hands, your right hand cupping it on one side and your left hand on the other. Now imagine that you're rotating the right hemisphere clockwise with your right hand while rotating the left hemisphere counterclockwise with your left hand. The orange splits along its natural fissures and structural biases, right? What's happened is that you've applied force to the orange unevenly. That, basically, is what shear force is. If you had squeezed the orange with equal force at every point of its surface, on the other hand, you'd have been left with about 2 ounces of OJ and a single very pulpy and messy but essentially intact orange.

"That's why you put wrapping around something -- it dampens any forces that may come around your object, and help distribute any loads around it," Andrade said in a telephone interview. "It will be more uniformly distributed, with less shearing stress, so that helps when it comes to fractures."

In other words, what you're aiming for is to create a situation where, if your luggage experiences any outside impact, the forces that strike generates propagate evenly and symmetrically, at least as far as its precious cargo is concerned. That's called isotropic loading, and it's the single best chance your treasure has for surviving a journey.

How Science Says You Should Pack

With a couple exceptions, the TPG staffers and the fine-art shipper were onto something with their suggestions, according to science.

"Common sense and instinct are typically 80% of the answer," Andrade said.

Obviously, the materials best for packing right next to your fragile item should be springy and light.

"What really matters is putting wrapping around your fragile objects so they can dampen the loads and break those force chains coming from outside," Andrade said. "Put fluffy stuff to absorb the energy, and that will transmit very little energy to the next object."

Bubble wrap and Styrofoam, which are both light but also tend to bounce back to their original shape, are ideal. But since most people don't go on trips with bubble wrap or Styrofoam peanuts, the next best bet, according to Andrade, is synthetic fabrics like polyester — not so much cotton, like Freifeld suggested.

"Synthetic fabrics are great, since they're stretchable by design and would take a lot of the force load and help dampen and distribute them evenly," Andrade said. "Socks are good. I also use the blankets from the airlines a lot."

The iffiest suggestion? Wrapping items in newspaper or grocery bags, as per Ellis, which would do little absorb the impact of a blow. If paper's your only option, it'd be better to crumple it up into fist-sized wads and try to apportion them all around your object.

How densely you pack the material around your object is another key decision. The problem with the typical packer is that that's usually the opposite of what you have to work with.

"In general, we're trying to jam as much stuff as we can into our suitcases, so we try to be at the highest packing density as we possibly can," Andrade said. "But that makes you prone to breakage and to fracture."

But that leads to a packing paradox: Densely packed stuffing around an object means more contact, and therefore more avenues along which outside forces can be transmitted to it (the explanation behind Freifeld's warning against packing too tightly). But the denser the cushioning, the more evenly distributed those forces are.

The way to resolve the paradox? Pack the object evenly and densely, avoiding gaps, but with material that is not itself dense.

"Put more of the fluffy material around the object so that it evenly distributes the forces,"A said.

Since you're trying to create a situation where forces are perfectly evenly distributed, a sphere-shaped suitcase would be the perfect solution. But since that's not practical for a number of reasons, you should be trying to create as close to a sphere as you can out of the stuff you're packing directly around the object.

Genter and Riva were onto something with their strategies: The hard stuff should come outside of the soft stuff. A hardshell case, for example, will absorb much of the kinetic energy at the impact point.

"Hard shells tend to distribute the forces, whereas a soft shell will localize the load," Andrade said. "Imagine poking your arm with your finger: You see your arm deforming, whereas if you poke your elbow, nothing happens."

But if you're absolutely determined to make sure something makes it back home in one piece, and you don't trust the airline one whit, there's only one real solution, all the experts agreed.