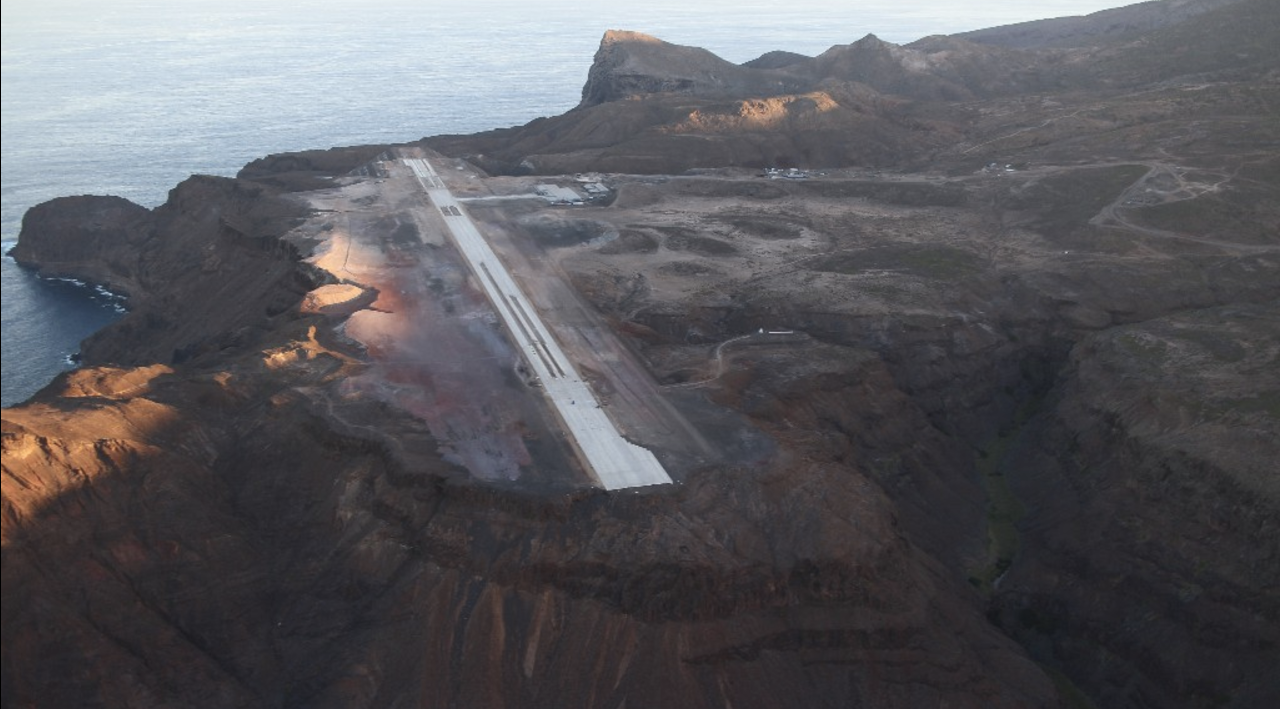 Approximately 1,200 miles from the West African shoreline, in the middle of the South Atlantic, lies Saint Helena island. This British overseas territory is best known for being the final homeland of Napoleon. It's also one of the most remote destinations in the world; the island is currently only serviced by the mail ship RMS Saint Helena from Cape Town.

In 2005, the British government announced plans to build an airport on the island and begin regular commercial flight to connect St. Helena's economy and 4,000 residents with the rest of the world. 13 years and £285 million later, the island's airport is finally scheduled to receive its first commercial flight, on October 14.

Having commercial flights will certainly make the island a more appealing destination. Round-trip fares on the RMS Saint Helena start at ~$1,200 for an inside cabin with no window or private bathroom. The round-trip voyage takes two weeks and leaves travelers on the island for one week of that time. Now that commercial air service is beginning, the RMS Saint Helena will make its final voyage to the island and neighboring Ascension in early 2018.

Airport construction began in 2012 on a leveled-off mountaintop on the island's northeast corner. The remote location, paired with multiple engineering challenges, bureaucratic hurdles and a lack of interested air carriers, caused significant delays. On September 15, 2015, a twin engine Beechcraft King Air 200 was the first aircraft to land at the airport. Also in 2015, British Airways' South African franchisee, Comair, announced it would operate regularly scheduled flights from Johannesburg to St. Helena.

A final delay, which received significant media attention around the world and caused Prince Edward to cancel his trip to open the airport, was caused when a Comair 737-800 trial flight aborted its first attempted landing on the island due to wind shear. The aircraft eventually made a successful landing, but the wind shear issue was significant enough that the UK's Secretary of State for International Development appointed an independent commission to review the issue and make recommendations.

The current fix is to have aircraft land on runway 02, which experiences less wind shear than an opposite approach but also requires a tailwind approach.

After more than a year of delays due to the wind shear issue, the St. Helena government announced in December 2016 that it was taking bids for a new contract of regularly scheduled air service beginning in 2017. According to the government's request for proposal, the bidding airlines must have "a minimum single weekly frequency from an airport capable of offering non-stop service beyond to the key markets of the UK and South Africa" and "a maximum of a single technical stop between St. Helena and the selected gateway, in each direction."

Comair, the originally selected carrier before the wind shear issue, did not even bid on the service. Instead, in June of this year South African Airlink was announced as the winner. Airlink will operate the flight from Windhoek, Namibia, where two feeder flights from Cape Town and Johannesburg will combine for a fuel stop, and then a single flight will continue to St. Helena.

Airlink will operate once-weekly Saturday flights on Embrarer E190 ETOPS (Extended Twin Engine Operations) aircraft just acquired this year, with a flight time of approximately six hours and 15 minutes from Johannesburg, including the fuel stop in Windhoek and the collection passengers from Cape Town for the onward leg. Flights depart every Saturday from Johannesburg at 9:00am and land in Saint Helena at 1:15pm. The return flight leaves after an hour and fifteen minutes on the ground and lands back in Johannesburg at 10:30pm. In each direction, there's a refueling stop in Windhoek as well as a chance for passengers to depart for Cape Town. Round-trip economy fares are currently ~$1,200.

After years of delays and exorbitant cost, HLE has earned nicknames like "The World's Most Useless Airport." Even with the air service now scheduled, the high cost of fares means most island residents won't be able to afford the flights, and many are worried about the effect of mainstream tourism coming to the island.

I'm scheduled to take the first commercial flight from Johannesburg to St. Helena and spend the night on the island. I'll be talking to locals to get their true feelings on the project and experience a glimpse of what life is like in one of the most remote locations on Earth.

While I'm not particularly thrilled about six hours on an E-190, I'm incredibly excited at the opportunity to experience what it's like bringing commercial flights to one of the last locations on earth only serviced by ship. Stay tuned for a full trip report.