What It's Like to Run on a Closed Atlanta Airport Runway 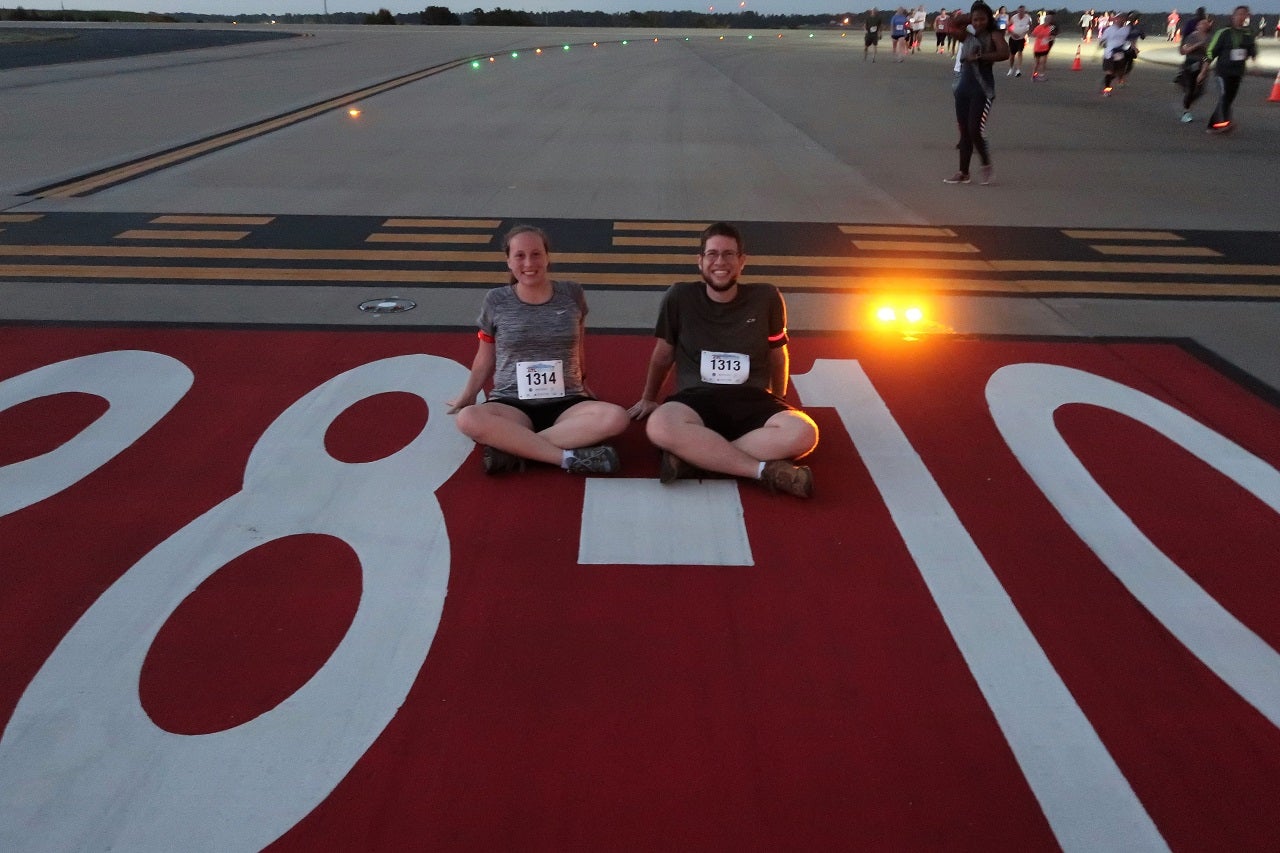 What It's Like to Run on a Closed Atlanta Airport Runway
This post contains references to products from one or more of our advertisers. We may receive compensation when you click on links to those products. Terms apply to the offers listed on this page. For an explanation of our Advertising Policy, visit this page.

Usually if you're running on a runway, something bad just happened. However, once a year, thousands get the chance to do so on Atlanta Hartsfield-Jackson Airport's fifth runway. This year, I was one of them.

Hosted by Atlanta mayor Kasim Reed, the "The Mayor's 5K on the 5th Runway" had its third annual race Saturday, September 30. In order to limit the impact on air traffic, the race starts promptly at 6:30am and all walkers must clear off the course by 7:30am. The runway is cleared and swept for debris so that it can be re-opened no later than 8:30am.

The cost of registering for the 2017 event was $40 if you wanted an official time, t-shirt, medal, drinks and snacks before and after the run. For those of us going with the idea of just going for a fun run, you can save $5 by registering without chip tracking. Either way, there's a few-dollar processing fee, so my wife Katie and I ended up paying $38.95 each.

We were staying at a nearby Holiday Inn Express (College Park location — which turned out to be great for plane spotting ATL's south runways). We wouldn't have minded a warm-up walk over to the course, but the roads around the area weren't walkable — especially in the dark. As the race organizers sent out 20% off Uber and Lyft codes, we figured there would be high demand and low supply due to the early morning for rideshares. But, there turned out to be a few drivers free in the area, and our driver was completely unaware of the event yet.

It seems like almost everyone either drove and utilized the free parking at the Georgia International Convention Center (GICC) or took MARTA to the airport. The race organizers arranged for shuttles to run from both of these spots to the race meeting point at Fire Station #33.

On Site Registration and Security

As this is at an active airport, security is still a high priority. In order to retrieve your race bib, you're going to have to show government-issued identification. Then, each racer undergoes a full search from TSA officers using metal detector wands to enter the fire station.

The festivities kick off as soon as you get inside the fire station, including a dance floor and music to match. After a welcome from the Atlanta Mayor Reed and two US Olympic gold medalists, a marching band played the runners out to the start line, located on taxiway Sierra Golf.

Before we kicked off, walkers and un-timed runners were encouraged to give way to the runners at the front of the pack. Mayor Reed climbed the stairs to the top of the ATL firetruck and counted down to the slightly-early 6:20am start.

Since it was still dark when we took off, race organizers had set-up floodlights at certain critical turns, set up cones to avoid runners twisting their ankles on the taxiway drop-offs and issued each runner a flashing red armband. In the darkness of the predawn hour, the sea of blinking red lights was quite a mesmerizing sight.

As this is a flat course, many may be prepared to set a new personal best. However, we hadn't done much training and figured we'd just enjoy the experience rather than rushing through it. However, one thing to note for those going for a personal record: go around the black marks! You know those black tire marks you see on runways? Turns out those are very sticky.

For those curious, the runway lights were turned off and large "X" signs were set-up on both ends of the runways to make sure that pilots didn't accidentally line up on it. However, active aircraft weren't far away. Throughout the run, we could hear the roar of aircraft taking off or using reverse thrusters on landing on the nearby runway 9R.

One benefit of taking your time on the run: you get to enjoy a wonderful sunrise as your finish the run.

As with most races, there are a slew of photographers near the finish line. Usually it costs a decent amount to get a professional shot of you hurrying to the finish line. So, I was surprised to get an email "FREE Photography for the Mayor’s 5K on the 5th Runway 2017!" after the race. Sure enough, each racer can download photos for free. While mine weren't the best, the TrueSpeedPhoto photographer got a great shot of Katie:

After the run, there's drinks, recovery snacks and more dancing in the fire station. Meanwhile, many runners took the opportunity to get shots of themselves on ATL taxiway or with one of the airport's Oshkosh firetrucks. T-shirts and medals were handed out to all participants:

However, we couldn't hang out for long. Less than three hours from finishing the run, we had a flight to Rome (FCO) via Dallas/Fort Worth (DFW) to catch. We were easily able to get an Uber driver located on the far side of the airport to pick us up from the fire station.

It's probably not going to take much convincing for some of you, but this was an awesome experience. If you're an AvGeek or runner in the Atlanta area, watch for this event in September 2018. If you're looking for a fall trip to the Atlanta area anyway, it might be worth scheduling the trip around this event.

Other Runs on a Runway

From what I can find, here are some other runway runs held across the US: