Articles
Lori Zaino is a writer for TPG and TPG UK covering travel, news, points and miles and more. She's been based in Madrid, Spain almost 15 years and is an expert in travel throughout destinations such as Europe, Southeast Asia and Africa.
Follow
Sept. 20, 2017
•
11 min read 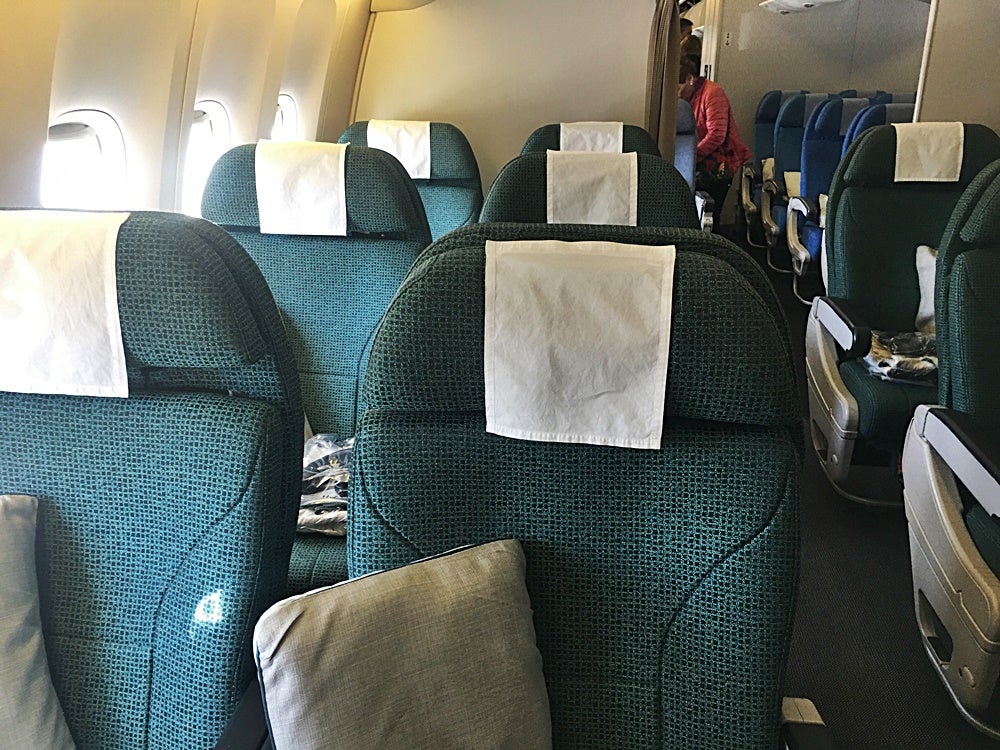 I recently came across a deal on a nonstop economy flight from Madrid (MAD) to Hong Kong (HKG) on Cathay Pacific — 497 euros, or about $528 at the time — and I knew I couldn't pass it up. The day of the flight, I was mentally prepared to spend 12.5 long hours in a small economy seat, but much to my surprise, I found out at check-in that I'd been upgraded to premium economy thanks to my Oneworld Ruby status (via my American Airlines Gold status). Apparently, the flight was overbooked, but the airline gave me an upgrade.

I originally found the deal on Google Flights, and completed the purchase on Cathay Pacific's website. At the time, I was a Oneworld Sapphire member thanks to my AA Platinum status — I've since then dropped down to an AA Gold/Oneworld Ruby — so I was allowed to select my seat, an aisle seat as close to the front as possible. I used my Chase Sapphire Reserve Card to book the flight so I could get 3x the points for the travel purchase, or in this case, 1,584 Ultimate Rewards points. Unfortunately, I wasn't able to earn any AA miles this time since my fare class wasn't eligible.

When I was checking the cost of round-trip premium economy flights on this route, I found they started around $1,300 — or closer to $1,600 on most dates — so the fact that I was able to get upgraded to premium economy one-way was a steal considering I'd paid about a third of the regular price.

I headed to the Oneworld priority check-in desk for Cathay Pacific at MAD after checking in online the previous evening. At first, the woman at the counter was rude, saying economy passengers needed to wait in a different line, but I politely explained that I was a Oneworld Ruby member, as stated on my boarding pass, and therefore free to use the priority line. Then, she had trouble finding my seat — it took her a while, but she eventually verified that I'd been upgraded to premium economy and that's why she couldn't find my original seat. Resisting the urge to do a victory tap dance right then and there, I thanked her and headed for security after she reprinted my boarding pass. This was the first time I had ever been upgraded on an international flight on a partner airline because of my Oneworld status, and I was not only thrilled, but surprised.

I arrived at the gate a few minutes late to find a long line waiting for me. Several entrances were blocked off: one for business-class passengers, another for premium economy flyers and a few for economy passengers that were separated by row numbers. Nevertheless, people didn't pay attention to the marked lines and were forming a disorganized mob at the gate. I boarded along with the other premium economy passengers, though I was one of the last to do so.

While there are a few versions of this particular aircraft, I was on the three-class 777-300ER (77G), which comes with 40 business-class seats, 32 premium-economy seats and 268 economy seats.

The premium economy seats really are superior to those in economy in terms of size and space, and are much more comfortable — unfortunately, I wasn't upgraded for the return trip and sat in economy, so I say that from experience.

The 32 premium-economy seats are arranged in a 2-4-2 configuration in a small, separate cabin, while the regular economy cabin, pictured below, has them arranged in a 3-3-3 layout.

Note that you do have to use the lavatories located in the economy cabin, as premium economy doesn't have its own set.

At first glance, the premium-economy seat looks slightly similar to a domestic first-class seat, and you can tell it's larger than the regular economy seat, at 19.5 inches wide with 38 inches of pitch, while a regular economy seat is 18.5 wide with a pitch of 32 inches. The footrests also make a world of difference — you won't completely lie flat, but you'll really feel as if you could stretch out thanks to the eight-inch recline.

I was lucky enough to have the bulkhead aisle seat, 30H, so I had plenty of space. The seats also have four-way movable headrests. The footrest was my favorite part. Although it didn't rise up enough to make the seat completely horizontal, it still made a world of difference when it came to my overall comfort level.

At first I couldn't figure out where the controls for the footrest were, but after some inspection, I discovered the buttons were located on the inside of the armrest.

The in-flight entertainment screens are larger in premium economy than they are in coach — 10.6 inches versus nine inches. My IFE screen was in the armrest, but I didn't find it to be bothersome.

There were plenty of movies, TV shows, games and other content to keep me occupied for the 12.5 flight to Hong Kong. There was also a special feature that showed you how to work your seat if you were still confused and couldn't find the buttons.

Premium-economy passengers also received a pillow, blanket and a pair of noise-cancelling headphones with a double-prong jack.

I received a small amenity kit, which included an eye mask, socks, earplugs, a toothbrush and toothpaste.

There was also a charging port and a USB charger underneath every seat so you could charge all your devices during the flight.

It's also worth noting that premium-economy passengers could check a bag weighing up to 25 kg (~55 lbs), not just 20 kg (~44 lbs). Depending on the route, you may also be able to check two bags instead of one, so if you plan to purchase a premium-economy fare, check out the baggage rules for your particular route before you go.

Before takeoff, a welcome drink was served and a hot towel passed out, so I was able to enjoy a glass of crisp white wine even before I left the ground — but that's where the special food-and-beverage treatment ended. Cathay Pacific's website specifically states that long-haul premium-economy passengers receive a "selection of enhanced entrées, complimentary bottled water and a wide variety of snacks." The word "enhanced" was not an accurate portrayal of the food I was given on this flight.

The menu — which came in both Chinese and English — was ever-so-slightly different than the economy menu, and my food was average at best. The meal service itself seemed to be no different than that of any other economy long-haul flight I've been on.

I chose the lemon chicken with vegetables and rice — the rice was dry and bland while the chicken was gristly and barely edible. The vegetables were hard and the bread was soggy. The carrot flower seemed nice, but didn't taste as good as it looked.

I took a photo of the economy beef dish, which looked to be about the same quality level as the "enhanced" premium-economy chicken entrée.

The snacks were the same for economy and premium-economy passengers. Halfway through the flight, noodle soup was available, and you could also head to the galley at your leisure to munch on chips, mini granola bars, chocolates and popcorn.

Breakfast was bland and boring, a choice of eggs or seafood congee. I chose the eggs, since they seemed to be the safer option, but they weren't very good.

The best part of the meal service was the ramen, which was delicious but due to the high salt content, my feet could barely squeeze back into my shoes at the end of the flight. You know the in-flight food is bad when the Cup Noodles is the best thing you've eaten.

That said, Cathay Pacific makes it seem like you'll be getting a much higher-quality dining experience in premium economy, and that really just isn't the case. It's inaccurate to change three words on a menu and label it "enhanced." The correct word for that would simply be "different." The chicken with lemon or the chicken with pesto? In the end, it's the same rubbery chicken topped with a different sauce. The good news is that the dining experience is something the carrier could easily improve if it wanted to, but the hardest element to alter, the seats themselves, are the true selling point for Cathay Pacific's premium-economy long-haul product.

If seat comfort is really important to you, I think premium economy is worth the extra money, with more legroom and recline than you'll get with the regular economy seat. Just don't splurge on it if it's high-end dining you're after, since it's really the same kind of food you'd have in economy — but in a slightly nicer package.

Have you flown in Cathay Pacific's premium economy aboard the 777-300ER? Tell us about your experience, below.