Preview: A Look Inside the New Terminal at Singapore Changi Airport 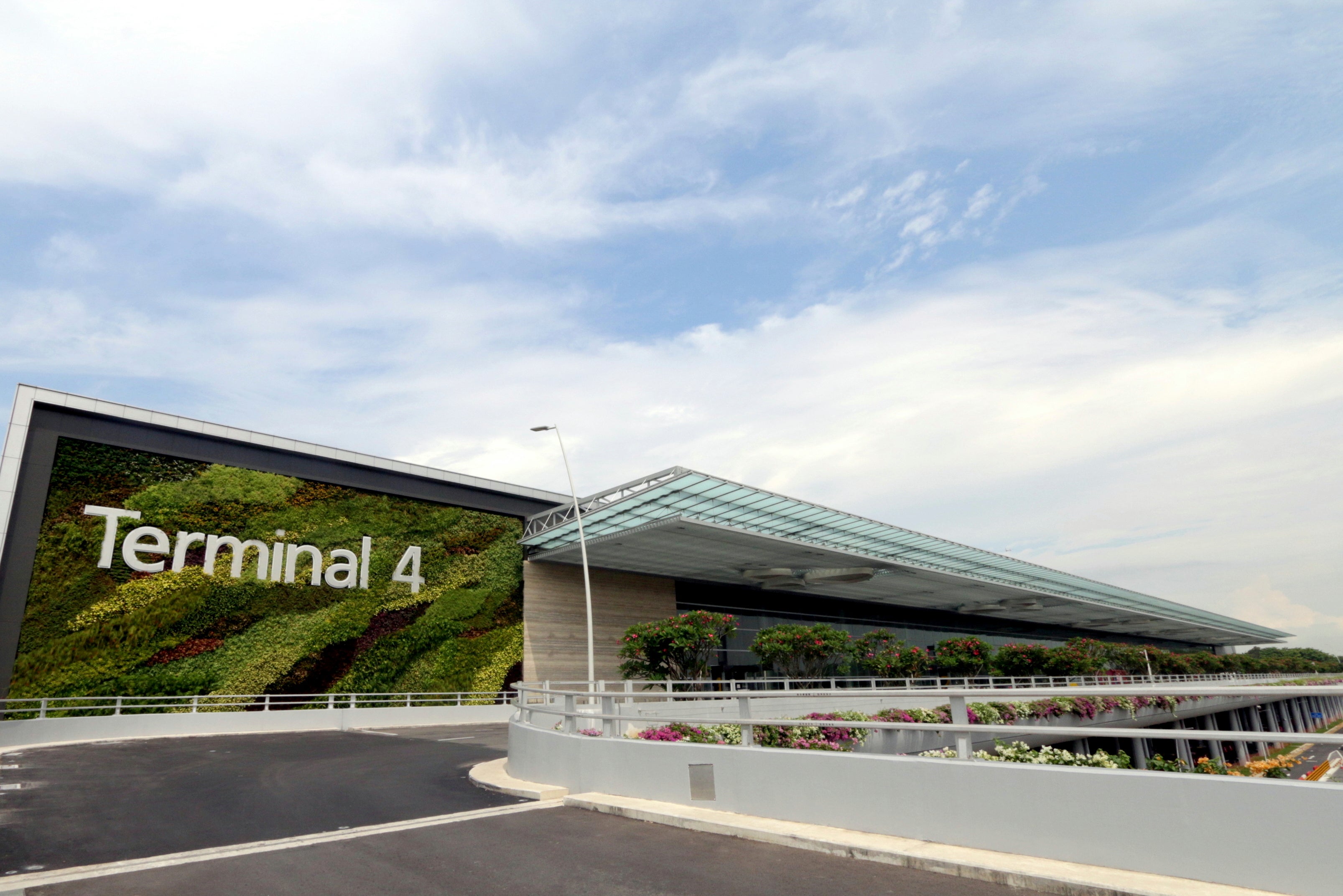 Preview: A Look Inside the New Terminal at Singapore Changi Airport
This post contains references to products from one or more of our advertisers. We may receive compensation when you click on links to those products. Terms apply to the offers listed on this page. For an explanation of our Advertising Policy, visit this page.

There aren't many airports in the world travelers actually look forward to arriving in, but Singapore's Changi Airport (SIN) is definitely one of them. Recently, the World's Best Airport unveiled its soon-to-be-opened Terminal 4, set to officially open to the public at the end of this year — and it looks stunning.

Back in 2012, the folks at Changi decided to repurpose the former Budget terminal and turn it into a full-service terminal to help the airport cope with its increase in passenger traffic. After two years of design and planning, the airport operator, Changi Airport Group, released a video in 2014, providing a sneak peek into the space before construction had started. Check out the video below for a closer look.

Fast forward three years and the terminal is almost ready to welcome its first travelers. Situated on southern end of the airport, the 2.4-million-square-foot terminal is the smallest of four, but also the most advanced, offering an end-to-end Fast and Seamless Travel (FAST) experience aimed at improving operational efficiency and reducing wait times for passengers.

The difference between other airports and Changi is obvious upon entering the departure hall area. There's a sense of having more space thanks to the high ceilings, a common theme that runs across all of SIN's terminals. Similar to Terminal 3's design philosophy, the use of skylights and glass walls allows natural light to flow in, providing a naturally ambient daytime experience for passengers in eco-friendly fashion.

The departure hall houses seven check-in rows, four of which are dedicated FAST lanes. There, passengers can use one of the do-it-yourself check-in kiosks to obtain boarding passes and baggage tags.

At the automated bag-drop stations, a photo of the passenger is captured and matched against the photo in the passport before it'll accept the luggage.

Local and international works of art and sculptures are featured prominently, all depicting the common themes of travel and aviation. Look out for Hey Ah Chek!, a sculpture by local Cultural Medallion winner Chong Fah Cheong, which depicts a mother and her son hailing a trishaw ride after a visit to the market in the 1950s.

Three large bird sculptures greet passengers in both the arrival and departure halls as part of Les Oiseaux (The Birds) by French artist, Cedric Le Borgne.

As passengers transit from the departure hall to airside, things look a little different. Unlike its other terminals, Changi is implementing centralized security screening in Terminal 4 — nothing too unfamiliar for the average US traveler. While in line, passengers can view a 50-minute long, custom-created montage of scenes from around the region on a 230-foot-long immersive LED wall — a far cry from the usual TV screens reminding people to take out their liquids and electronics. Here's a preview, below:

Once you're past security, look up to see Petalclouds, a specially commissioned kinetic sculpture that moves to a classical score, similar to the Kinetic Rain you'll see in Terminal 1.

Passengers can also find more traditional elements in the transit area, which showcases Singapore's local culture and flavor. The Heritage Zone gives a glimpse into the evolution of shophouse architecture from the 1880s to the 1950s, which can still be seen today in the city's Joo Chiat and Katong neighborhoods.

More art sculptures line the walkway that leads you toward the boarding gates.

Colorful seating dots the waiting areas, serving as a reminder of the fun the airport designers had in mind for this terminal.

Known as The Garden City, it's no surprise to find trees along the corridors here, made possible thanks to Changi's in-house horticulture team of 11.

Starting from the arrival hall, which houses both manned and FAST immigration counters, the effort is being made to impress arriving passengers.

And you can forget the gloomy basements where most airports situate their baggage carousels. At Changi, travelers will be surrounded by lush foliage and natural light while they wait for their bags.

This terminal and the upcoming Jewel Changi Airport expansion is Changi's way of redefining the airport experience, and is a true testament to the operator's continual push for innovation and design. While there is no official opening date as of this writing — the terminal is currently undergoing the final stages of its operational trials — we know nine airlines will operate out of this new space as of late 2017: AirAsia Group (four airlines), Cathay Pacific, Cebu Pacific, Korean Air, Spring Airlines and Vietnam Airlines. The terminal has 17 stands available for narrow-body aircraft and four stands for wide-body aircraft. Once opened, it will serve up to 16 million passengers a year, raising Changi's total handling capacity to 82 million passengers per annum.