How We Experienced More of Disney World for Less

Articles
Summer Hull , aka Mommy Points, ran the Mommy Points site for families who want to travel more for less using miles and points for seven years. She now heads up a variety of special projects at TPG when she isn't exploring the world with her own two girls.
Follow
July 10, 2017
•
8 min read 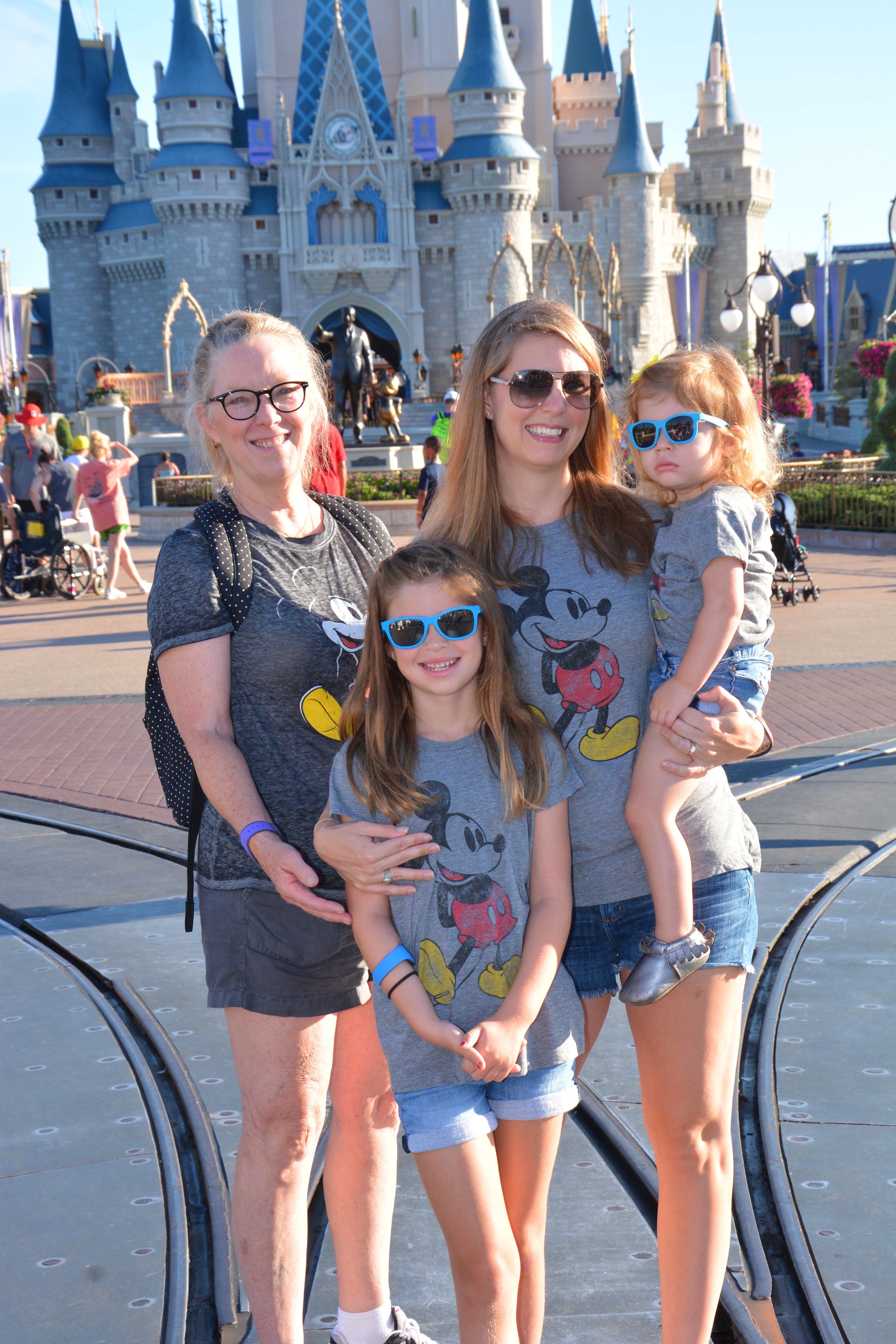 How We Experienced More of Disney World for Less
This post contains references to products from one or more of our advertisers. We may receive compensation when you click on links to those products. Terms apply to the offers listed on this page. For an explanation of our Advertising Policy, visit this page.

A couple of months ago I found myself in a situation where our big summer family trip had fallen apart and I had the opportunity to plan a new relatively last minute summer adventure. Somewhat unexpectedly given how hot it is in Orlando in July, my heart fell in love with the idea of taking the girls to Disney for a few nights. Not just that, but in part because of the reality that my youngest daughter absolutely would still need an afternoon nap in the room, and in part because I have just wanted to stay there for over 30 years, I wanted to go all-in and stay on the monorail at The Polynesian Village Resort. So, in the end, we did it.

I can't wait to tell you all about our stay and time at the parks, but first let's talk about how we put it all together. Spoiler alert: This was not a free trip and frankly not even one where miles and points played a starring role. They did play a supporting role since we used Chase Ultimate Reward points at a rate of 1.5 cents each to book our flights to Orlando and back, but our lodging and Disney Parks tickets while secured at discount, were not free or really anywhere even remotely close to free.

In other words, if you want Disney for free, this probably is going to be a very disappointing post. However, if you want more of Disney for less, you have come to the right place.

Our trip was going to be a relatively short three night stay at The Polynesian, so we didn't need a ton of days in the actual parks. In fact, we purposefully wanted time to enjoy our resort. We decided to devote our first afternoon and evening to playing at our resort hotel and then the next two days would be ones where we visited the parks. With a toddler in the group, park hopping wasn't necessary or realistic, so we just needed park tickets that get you into a single park per day.

We purchased the two-day Disney tickets from Undercover Tourist at a total rate of $217.76 per adult ticket and $204.87 for a child's ticket. Since our youngest is less than three, she is free to get into Disney. We purchased the tickets when there was an Amex Offer for a $30 statement credit on a $150+ Undercover Tourist purchase. We did each individual ticket as a separate transaction on an eligible Amex card so the adult tickets ultimately cost us $187.76 each and the child's ticket was $174.87.

That's still a hefty expense, but you could offset it further by paying that charge with your favorite credit card and paying yourself back with points, or you can even use the $300 annual travel credit via the Sapphire Reserve to offset Undercover Tourist charges.

To give some perspective on how good a deal a two-day $187 adult Disney ticket is - keep in mind that a one-day adult Magic Kingdom ticket directly from Disney for the same peak summer dates would have cost $132.06. Getting two days of parks for just $55 more isn't too shabby, but it also isn't free.

Paying for a Disney Hotel Night at The Polynesian

My initial plan was to use Chase Ultimate Reward points to book our stay at The Polynesian to keep our out-of-pocket costs as low as possible, but ultimately that didn't work because there was problem after problem after problem with getting a confirmation code from Chase that Disney could recognize so that I could reserve our FastPasses, make Magical Express Bus reservations, etc. I spent hours working on that problem and eventually threw in the towel and booked the room directly with Disney. If you are set on using Ultimate Reward points to book a Disney Resort, I highly recommend reading the comments section of the post linked above for some tips on how to eventually track down your Disney confirmation number.

Since I ended up booking one night directly with Disney, I was able to pay for the room with Disney gift cards that I had loaded to my Disney Vacation Account. These gift cards were ones I either purchased with my Ink Plus at an office supply store to earn 5x points or ones I had purchased with an Amex Offer at a discount at various points in time.

While it didn't work for our dates, if you plan to pay for a stay at The Polynesian or another Disney Deluxe Resort you should absolutely check out what Magical Vacation Tours has to offer - especially if your dates fall in the late summer and early fall range. I have heard several stories of folks saving about 50% on retail rates at deluxe resorts (such as about $250 per night at the Polynesian) through their special offers in the late summer and early fall.

For our final two nights in a Polynesian Deluxe Villa we rented a friend's Disney Vacation Club points to save over what Disney would have wanted directly for either the vacation club/timeshare studio villa or a standard hotel room. We couldn't rent points for all of our nights as they weren't all available at our close-in date. We got a pretty nice rate on our rented points from a friend, so all-in we saved a couple hundred dollars on those two nights by renting points over paying Disney's going rates.

If you are interested in doing this to stay at The Polynesian or even another Disney property, you will want to become familiar with the DVC points charts. The same room we had for 23 - 27 points per night in July can be had for as low as 16 points per night during the "Adventure Seasons" or as high as 31 points per night during the "Premier Seasons". While you can sometimes rent points directly from DVC owners in the $13 - $15 per point range, you can pretty much always rent points at $16 per point from the popular David's Vacation Club Rentals. At $16 per point, this means that the studio we were in starts at $256 all-in per night in the lowest season (which starts on January 1st!), and obviously that amount goes down if you can rent points from someone for less than $16 per point.

Your rented points total will be an all-in total that includes taxes, free parking at the resort and parks, your Magic Bands, etc. However, when you stay on Disney Vacation Club points it will not include housekeeping except on 4th day when they provide a Trash and Towel Service and on the 8th day where you would get a full cleaning. You can pay to have additional housekeeping services, which honestly we probably would have benefited from if we stayed any longer. Toddlers are messy.

While we were only at the parks for two days, we didn't skimp on the things we did while we were there. We enjoyed the heck out of some character meals, dinner in Cinderella's Castle, and even took a tour from Disney that I will write more about soon. For some of these costs we just used a card like the Sapphire Reserve that pays 3x points on travel, but we also loaded up on Disney gift cards with the Ink Plus to earn 5x Chase Ultimate Reward points per dollar spent at our local Office Depot before heading out on the trip so that at least our expenses can help us fund a future trip.

A final thing we did to save a little at Disney World was to take a Disney Vacation Club tour that resulted in us getting $100 in Disney gift cards and three bonus FastPasses per person!

Disney is rarely cheap, and it certainly wasn't in our case. However, I feel that we did a good job keeping the fun quotient really high while keeping the costs as low as we could for what we wanted to do. This was a shorter trip where I didn't want to trade off where we stayed or what we did in order to save a little here and there (though we have done that in the past). This time around I wanted to experience Disney all-in, and that's exactly what we did. Stay tuned for tons of details on our Polynesian stay, the character meals, the Disney tour we took, and much more...