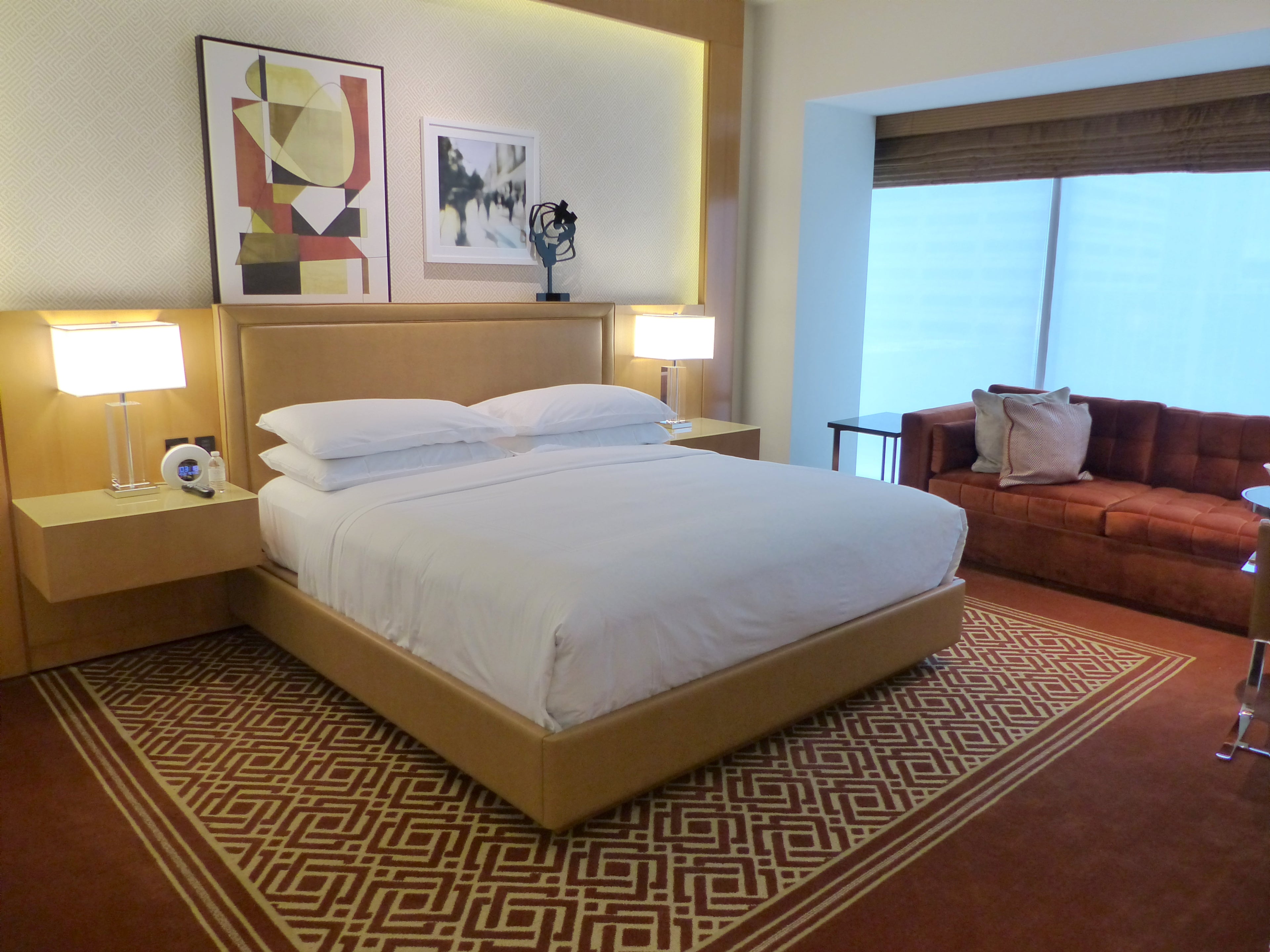 When the Conrad Chicago opened in December last year, it was no regular hotel launch. The 20-story building, located just off Michigan Avenue on the Magnificent Mile, was formerly an office for the advertising company Foote, Cone & Belding (AKA FCB). Now, it offers 287 guest rooms with interiors by Pierre-Yves Rochon, who designed such luxe spots as the Shangri-La Hotel in Paris, the Savoy Hotel and Four Seasons Hotel in London and the Waldorf Astoria Beverly Hills.

I was recently in town for the James Beard Awards — the Oscars of restaurants — and got a chance to spend two nights at this swanky Hilton property. I was thoroughly impressed. Here's why.

You could also use other travel cards like the Chase Sapphire Reserve or the Chase Sapphire Preferred to book this hotel, which let you earn 3x or 2x Ultimate Rewards points, respectively, on travel purchases worldwide, or the Citi Prestige if you want to take advantage of its nifty 4th Night Free perk.

Rates for the Superior King room I booked were $348.58 per night including taxes, so the total for both nights came to $697.16. As a result, I earned 12,470 Hilton Honors points and 3,485 Membership Rewards points for the stay.

Don't let the official address fool you: Yes, it's located at 101 East Erie Drive, but the Conrad's right off upscale Michigan Avenue, which makes up the Magnificent Mile, Chicago's equivalent of Fifth Avenue in New York. The upscale strip of land hosts department stores (Bloomingdale's, Neiman Marcus, Saks Fifth Avenue, Nordstrom and Barneys), museums (the Art Institute of Chicago, the Field Museum of Natural History, the Chicago Sports Museum) and several hundred restaurants. As for hotels, the competition includes an Intercontinental, Four Seasons, Ritz-Carlton, Westin and The Drake Hotel. My room, which overlooked the street, was directly opposite an Ermenegildo Zegna shop. Buses run on Michigan Avenue and you're just two blocks from the "L" train. The hotel is 12 miles from Chicago Midway International Airport (MDW) and 17 miles from Chicago O'Hare International Airport (ORD), but give yourself at least an hour to get to and from any airport as Chicago has bad traffic at rush hour.

The gold "Conrad" logo at the exterior entrance to the hotel is hard to miss.

Step inside and you won't see a lobby. Instead, there is a small four-seat waiting area and an elevator.

Take it up to the lobby level on the 20th floor and you can check in. When I arrived at around 4:00pm, there were no other guests. The vibe was calm and collected.

The decor throughout the hotel is modern, with red and orange hues. To the left side of the lobby is the gastropub Baptiste & Bottle, one of three eateries run by celebrity chef Richard Sandoval.

Directly opposite the front desk are couches and work areas with views of Chicago and various skyscrapers visible through floor-to-ceiling windows.

The receptionist explained that I had been upgraded to a King room with a view of Michigan Avenue and that it came with complimentary Wi-Fi, a small refrigerator, a Nespresso coffee machine and a 65-inch HDTV screen. The staff would prove to be exceptionally well trained in the art of remembering names. It felt like everyone I passed greeted me — "Hello, Mr. Cury" — like I was a regular.

A woman named Melanie initiated text messages, too: She asked how the room was a few hours after I checked in and how my stay was on day two, while a different employee — Adriana — fielded my subsequent messages. Could I get a tour of the new Japanese restaurant on the roof? "My apologies," she said, "the roof top is closed until its official opening date." Alas, Noyane (which means "hidden roof" in Japanese) was not yet open when I stayed at the Conrad.

Stepping inside the room, I immediately noticed a full-length mirror on the left wall. I think that's essential, especially if you plan to attend black-tie events.

The red-orange color scheme continued here in the carpet and couches.

In addition to the king-size bed, my room had a sofa with throw pillows located by a window, which made an ideal spot for reading. I also appreciated the easy-to-use buttons for lights and shades — I've been thrown off at some other modern hotels.

What I didn't like: You can definitely hear sirens from outside — quite a few of them — throughout the evening. Especially if you face Michigan Ave.

I like this kind of bathroom: minimalist, no clutter, plenty of counter space, clear places to hang towels. The lighting options are also noteworthy; there's a second shelf on a lower level that houses more towels and a blow dryer.

There was no tub, but the walk-in shower room was large enough for two or three people at a time. Alas, just me on this trip.

The toilet was standard fare — in a somewhat claustrophobic space opposite the sink.

Toiletries are made by Aromatherapy Associates and included shampoo, conditioner and body wash. Nothing especially lavish or excessive.

The text messaging (which you don't have to accept) continued throughout the stay. I inquired about a perk I had read about: complimentary house car rides within two miles of the hotel between 7:00am and 5:00pm. Scott, another hotel staffer, responded instantly with an apology and a solution: "The house car is currently in the shop for repairs. What we have offered instead is a $10 cab credit." I took him up on it, naturally.The hotel gym is open 24 hours and was large and spacious. It's packed with treadmills, stationary bicycles, elliptical and rowing machines, free weights, kettle bells...

The room comes with a Nespresso coffee machine and a mini-fridge.

To drink? Your pick: Coke or Diet Coke? Anything else and you'll have to order room service or leave the room.

For breakfast one morning, I ordered room service, which came in a rectangular box. The fruit (pineapple, strawberry and melon) was fresh, the pastries wonderfully flaky, the coffee hot and the granola-and-yogurt attractively topped with blueberries. After I ordered room service, I sent a text message saying the tray was ready to be picked up. I started liking the texting — no unnecessary calls or wondering which department to contact for odd requests.

I had a Margherita pizza, which was a good size for one person and didn't break the bank at $8.95. It had a decent char, fresh basil strips and came served on a wood platter. Definitely not Chicago-style — which is fine by me.

Baptiste & Bottle is the sexy, lobby-level, "bourbon-centric" bar and restaurant with a focus clearly on booze. The drinks menu alone showcases flights of bourbon (for between $30 and $150), classic and specialty cocktails and dozens of whiskey options organized by country, plus wine and beer. You can also buy a whole bottle and keep it here in a locker if that sounds appealing to you.

Any place priding itself on "American" cuisine needs to have a great burger; this one did not disappoint. It was tall, yes, making it hard to get a bite with every element in it (too much bread really), but it was cooked medium-rare as ordered, with juices soaking the bottom bun and a slice of American cheese to give it a bit more nuance. The fries were irresistible with or without ketchup.

To drink, I ordered the Southside Mule, a tasty mix of Knob Creek bourbon, pineapple-rosemary shrub and ginger, served in a pineapple-shaped copper container whose top came off and served as a stand. At $15, it was about the same price as a glass of wine. I'd order it again.

From the outside, you really wouldn't think this hotel is going to look and feel different. But it does: Inside, the design feels modern, the use of texting is appreciated and the rooms, restaurants and the gym all have a welcoming spaciousness. And the staff could not have been more helpful. That said, at $350 per night, it'd better be good.

Have you ever stayed at the Conrad Chicago? Tell us about your experience, below.