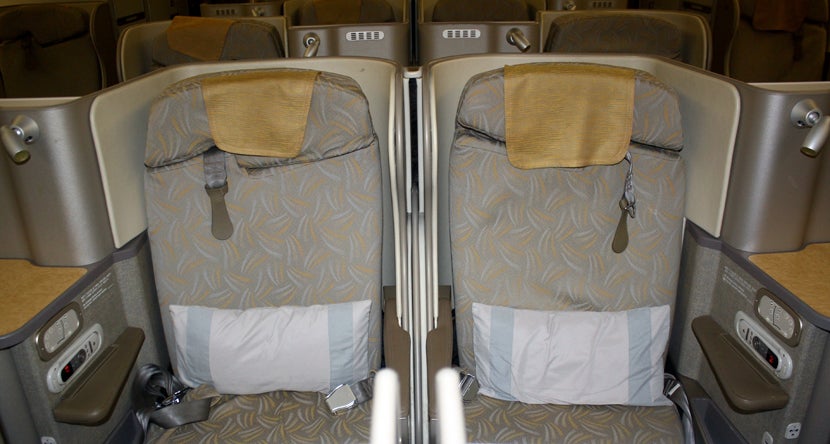 I was looking for a special flight experience for my wife as we traveled to the Philippines to visit her family. My mission: to find the coziest seat configuration at the most affordable price, accomplished as I was able to book United award tickets from Orlando to Manila on Asiana Airlines. Here are the details from my flight aboard Asiana's 777-200ER from San Francisco to Seoul in Business Smartium Class.

Inspired by this post about the best business-class seats for couples, I hunted for Business Saver awards to Manila. Fortunately, I found plenty of mixed award flights on Asiana that featured center "honeymoon" seats, as opposed to the traditional middle herringbone configuration, which we had already experienced when flying on Delta One for our honeymoon to Amsterdam.

The Korean airline utilizes both the A380 and 777 on its US routes. Most 777s have the usual staggered 1-2-1 configuration, which is fancifully named Business Smartium. I targeted the seats in the odd-numbered center rows because they are super close to each other — if you're traveling alone, you'll want to steer clear of these seats because your neighbor is literally within spooning distance.

I successfully booked two tickets via United's website for 80,000 miles each and $14.10 in taxes. The domestic portion of our trip from Orlando to San Francisco was in economy but the other segments (SFO-ICN, ICN-MNL) were in business class. I was confident that six months out we would receive a waitlist upgrade to first class on the domestic portion to match the I fare ticket, but to my surprise, it never came through and we were left hanging as numbers two and three on the upgrade list on the day of departure.

We checked in at the United counter at Orlando International Airport (MCO) and presented our passports since we would be continuing to Seoul. It was early and there was no wait in the premium line — we also made use of the United Club, where I happily stocked up on candy. Unfortunately, it turns out we had not been totally checked through to Manila and had to spend 10 minutes waiting at the SFO gate while Asiana agents updated our records and let us board the plane.

Our flight to San Francisco landed earlier than expected, at 9:36am, which I thought left enough time for us to visit Asiana's lounge before our noon flight to Seoul. I was wrong. The captain told us there had been a small fuel spill at a United gate — while not dangerous, it wreaked havoc on airport operations and left us without a gate for about an hour.

I was sweating it because we still had to change terminals and go through TSA. However, after a panicked run, TSA personnel did a marvelous job and we made it to the gate just in time for initial boarding.

We were warmly greeted by the crew as we entered the Boeing 777. My wife laughed when I said I didn't need assistance to find our seats because I'm an #AvGeek and knew exactly where to go.

While the color of the fabric upholstery is not contemporary, the cabin itself was clean and in mint condition.

On some international flights, Asiana offers a first-class cabin, but not on this route.

The 20 inches of seat width were good enough for me and similar to the offerings of competing airlines — the upper body portion is wider, with plenty of elbow room, and feels less claustrophobic. Each seat in the business-class cabin also has aisle access and a foldable armrest. Our seats, 3E and 3F, were both isolated off the aisle and it felt like we had our own little cocoon.

I loved that the end tables at either end gave us a significant buffer from the aisle. Note the wide cocktail table, pictured below, that also helped to enhance the level of privacy.

In fact, the amount of privacy we got with these seats was a highlight of the 13-hour journey. Since the headrest is offset because of the contours of the seat, you have to strain yourself to see another passenger. Needless to say, there were not any moments of awkward eye-to-eye contact with the people around us.

The seat was comfortable with about five inches of padding for bottom support — the headrest and upper-body support provided extra padding of about 6.5 inches. The seat pitch, 80.4 inches, was more than adequate, but then again, I’m 5'8." I estimate that if you're under 6'3," you'll find it sufficient, too. The bed measures 74.5 inches in its lie-flat position.

There's another cubby for storage underneath the foot area, where I stowed my shoes and jacket during the flight. The seat divider can be raised but I'd still strongly recommend a window seat if you're going to be traveling by yourself.

When it was time to sleep, it took some seat adjustments to get comfortable. Unfortunately, the seat in its fully flat mode was uncomfortable because the middle segment slightly protruded into our spines. Adjusting the angle to about 150 degrees and propping up the headrest a little did make the sleeping atmosphere more pleasant. This might be too much information, but we were able to spoon during the flight, so those “honeymoon” seats definitely lived up to the hype.

Note that the cabin temperature was a bit warm on this flight, so much so that I didn't even need to use the comforter. I don’t want it to be ice cold but usually prefer to sleep in a cooler space — I asked the flight attendant if she could turn down the temperature a little and she obliged. I instantly felt cooler but about two hours later, it was warm again.

My biggest complaint for this flight may seem minor, but it really affected my sleep: the pillow, tiny thing with not much stuffing. I like large down-alternative pillows that other airlines provide in the premier cabin, and this particular pillow was not acceptable for a 13-hour flight, so I borrowed a second one from one of the other empty seats.

Asiana does not provide amenity kits to business-class passengers flying out of San Francisco or Los Angeles, which didn't bother me — how often do we really feel compelled to take them home? Plus, we had plenty of little extras on this flight anyway: eye shades were available upon request, slippers were provided upon arrival and headphones that were handed out served their purpose but were not noise-canceling.

Other essentials like toothbrushes, combs, mouthwash and Clos de Verveine perfume were provided in the lavatory.

The 15-inch IFE system offered a selection of 26 Hollywood films, including classics like Ghost and To Kill a Mockingbird, as well as new releases like The Secret Life of Pets, Star Trek Beyond and Joy. There were also a few Korean films available with English subtitles.

Each seat came with a traditional AC power outlet and USB power port. Unfortunately, this Boeing 777-200ER was not equipped with Wi-Fi. On the bright side, the power outlet worked without interruption for the duration of the 13-hour flight.

After we had been seated a few minutes, we were presented with separate drink and food menus. Orange juice and water were offered but Champagne was curiously absent — the flight attendant politely said she could serve me after the main flight door was closed. Unlike other business-class experiences, nuts were not provided. Champagne Cattier Brut was served later from the bottle (it retails for about $20 on the ground).

Passengers seated in the premier cabin can choose between a western or Korean lunch selection. I love Korean food so I couldn't pass on that, but the western selections of beef tenderloin steak, grilled salmon or duck confit sounded pretty good, too. The first plate I received was a scrumptious and crisp cheese, artichoke and veggie appetizer. The flight attendant said she was impressed that I'd asked for Hite beer by name — it's one of my favorites.

The second dish I had was Korean pancakes, or jeon. The dish was interesting to eat, but I couldn't decide whether I liked it or not — it's essentially seasoned vegetables and meat that are coated with egg wash and flour, then fried in oil.

The hobakjuk — or pumpkin porridge — tasted like, well, pumpkin. The taste was overpowering for me. While I enjoy trying new things, I would never order this dish at a Korean restaurant.

Bibimbap, the main course, consists of minced beef served on top of steamed vegetables — it's accompanied by rice, soup and several other side dishes and tasted as well as I've had it on the ground. My favorite side dish was the kimchi. The decorative bowls, made in Korea, added a unique ambiance to the meal service. The flight attendants were attentive and topped off my pedestrian glass of Laboure - Roi Macon-Villages Chardonnay (about $17 a bottle). Ballantine's 17-year-old Scotch Whisky was the premier spirit on board.

An added benefit to our seat configuration was the slide-out tray table, which allowed you to escape the seat without making a mess at mealtimes.

Dessert was a simple bowl of fresh fruit, but the melon was unripe.

I sipped Taylor's 20-year-old Tawny Port ($50 a bottle) as I nibbled on traditional Korean cookies, which acted as a great palate cleanser. After meal service, the lights were dimmed and window shades closed to simulate nighttime at 3:00pm.

Two hours before landing, we were served another small meal: a mixed green salad with prosciutto ham.

The last meal we received was Korean beef with steamed rice, which was excellent. Other choices included potato-crusted chicken and shrimp broccoli porridge.

While we didn't have time to experience the Asiana Airlines lounge in San Francisco, we had a two-hour layover in Seoul (ICN) and got a chance to check out the business-class lounge — the carrier also operates a first-class lounge there.

It was around 6:00pm and bustling, but we had no difficulty finding seats. The library-like setting was a delightful contrast to the loud retail environment of the main terminal. Asiana's business-class lounge features a baby grand piano, shower rooms, massage chairs and large storage lockers.

The sweeping view of airport operations, along with the twinkling lights, was romantic.

Considering a lot of people were using it, the Wi-Fi strength in the lounge was pretty good.

I would not hesitate to travel in Asiana's business class on the 777-200ER again. Being able to fly from Orlando to Manila for 80,000 miles represents a good value and the "honeymoon" seats, along with the food service and professionalism of the flight crew, were highlights. The sleeping experience with the not-so lie-flat bed and pillow was barely satisfactory, but the privacy these seats provided from the aisle more than made up for it.

Have you ever flown in business class aboard Asiana's 777-200ER? Tell us about your experience, below.

Featured image by Our seats, 3E and 3F, were both off the aisle and felt like we had our own cocoon.