Skiing at Canyons Park City With a Family

Articles
Summer Hull , aka Mommy Points, ran the Mommy Points site for families who want to travel more for less using miles and points for seven years. She now heads up a variety of special projects at TPG when she isn't exploring the world with her own two girls.
Follow
March 09, 2017
•
10 min read 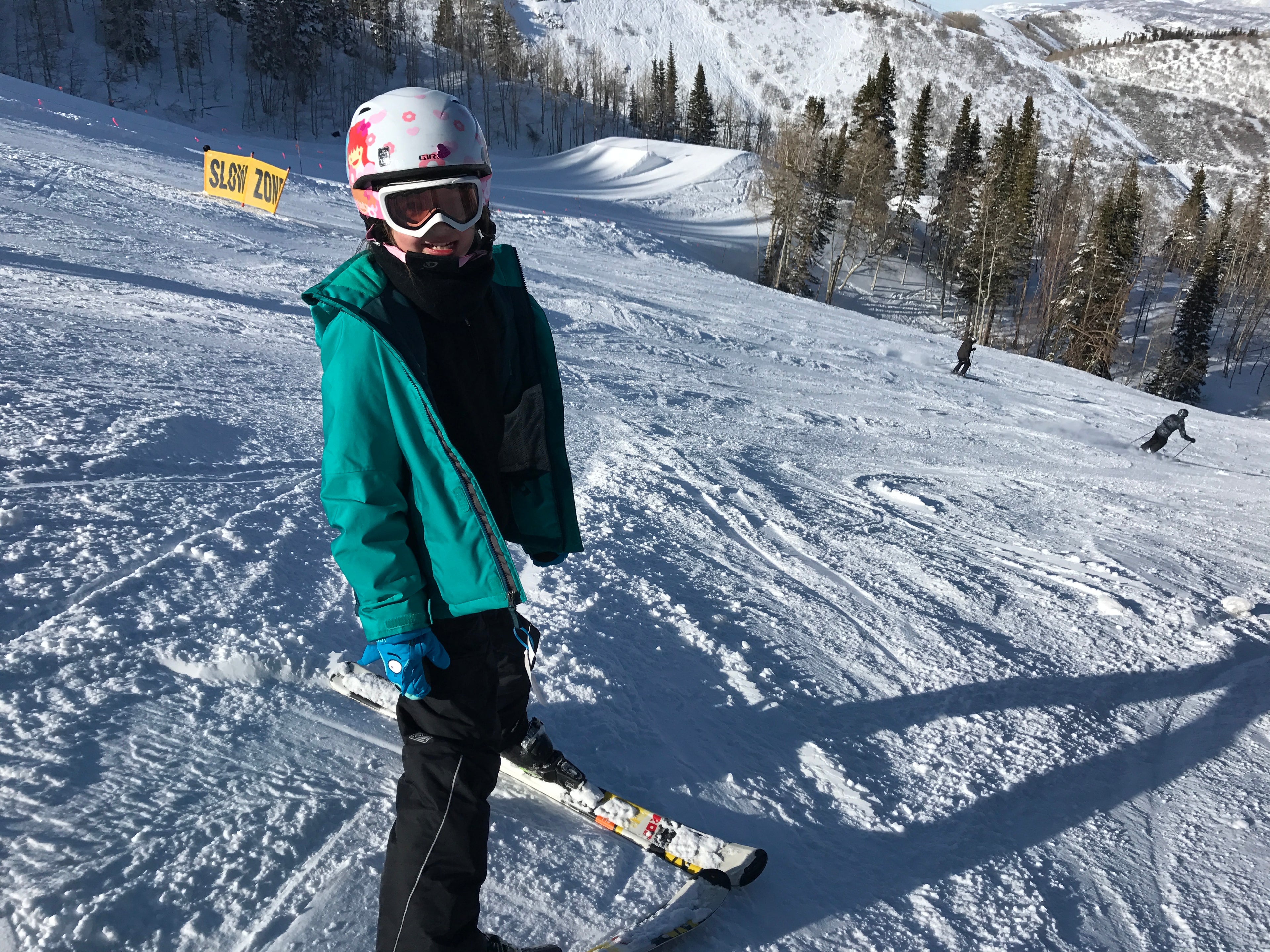 We selected the Hyatt Centric Park City and the adjacent Canyons section of the Park City Ski Resort for this year's mom/daughter ski trip primarily because it was a great value on Hyatt points, and it was somewhere we hadn't yet skied. You can read all about the Hyatt Centric Park City in this post, or check out the video below to see the hotel and the mountain in action, but now it is time to focus on our time on the mountain.

Canyons and Park City Are One Mountain...ish

First things first, while Canyons and Park City "are now one" in the sense that you can ski both with your Epic Pass, and you can get from one side of the mountain to the other either by taking lifts/gondolas/skiing or utilizing a free shuttle, the two areas aren't exactly the same thing. Below I have circled the Canyons base area where the Hyatt Centric Park City is located, as well as the Park City base area. In case it isn't otherwise obvious, they aren't exactly walking distance apart. It is about a 10-15 minute drive, or so I'm told, we never made it out of the Canyons section on our long weekend trip.

When purchasing lift tickets it doesn't matter which side you plan to ski more since they are the same from that point of view, but when it comes time to book your lessons, rentals, etc. you do need to specify which part of the mountain you are headquartering out of, and if you are staying at the Hyatt Centric Park City the correct answer is probably Canyons.

My seven-year-old has a spotty history with ski school, so I swallowed hard and offered her a half-day with a private instructor instead of ski school hoping that would be enough to get her "ski legs" back (I am not a very good ski teacher apparently....as was evident here). Thankfully for my wallet she is now at an age that she thought being with other kids would be more fun than with a private instructor, so she instead opted for a small group "Epic 5" lesson for kids ages 7-14 that costs about $339 per day. That price isn't cheap, but it includes equipment rental and the lift ticket. Yes, skiing is painfully expensive sometimes...at least Amex Offers for Park City Mountain keep popping up!

Park City/Canyons has similar small group lessons for the younger kids, too, The Ultimate 3 lessons are for three year olds, and the Ultimate 4 lessons are for 4-6 year olds. The different age groupings have different office areas and equipment rental sections which might be a little annoying if you have multiple young kids, but it did seem to help keep the focus in that particular area just on that age group.

Ski school runs from 9AM - 3PM each day, and at least the 7+ year olds like my daughter eat lunch daily in the basement of the Red Pine Lodge. I can't swear as to what the lunch arrangements are for the younger skiers. Parents aren't allowed to eat with them, but can come say hi from the door if that won't be disruptive for your skier. It isn't hard to find the ski schoolers on the mountain since the beginners will all be using the one lift for green skiers, High Meadow. I loved spying on my kiddo a few times so I could see her progress without her spotting me! The classes and instructors she had were really top notch and worth the price of admission for us!

If you do book ski lessons, make sure to do so in advance online or over the phone as they do fill up on peak dates and you generally pay a little less if you book in advance.

Canyons is Not for Beginner Skiers

We had a great time at Canyons/Park City, but if you or some in your crew are beginner skiers, this mountain has some very real drawbacks. Just like you can't really ski in or out of the Hyatt Centric Park City unless you are at least an intermediate skier, truth be told, you really can't ski on much of the Canyons side of the mountain at all if you prefer greens and easy blues. This is not a beginner mountain unless you are a brand new beginner who is challenged and happy doing one 2-minute run over and over again. This is a mountain designed for intermediate to advanced skiers. Look at their trail map if you think I might be over-stating this.

Again, we had a good time and would return, but I found it to be very odd that there wasn't any way down the mountain for a beginner skier. Had my husband been skiing this mountain it wouldn't have gone very well since he likes greens and easy blues, and Canyons just does not excel in that category. Unless you are a pretty decent skier, this is a mountain where you need to very frequently check the trail map before going forward because you can easily end up in a spot where there is no beginner way down. I am a decent skier, and I was challenged on some runs they mark as blues, and frankly I didn't love having to be so acutely aware of where I was going at all times so that I didn't end up somewhere I shouldn't be...or worse, take my daughter somewhere she shouldn't be. And yes, that happened.

Other than the lack of easier runs (and that one weird pull rope thing?!), the Canyons side was pretty great for me personally. Even on a perfect ski condition weekend day I didn't hit any real lift lines, and one lift is even covered with heated seats. We had the best of both weather worlds on our trip via a blue sky day with decent snow the first day and then a snowy 12 inch+ powder day the next.

For what it is worth, I had the most fun on the powder day taking Tombstone Express up the very center of the mountain between Canyons and Park City, and then skiing down the maze of blue runs, most frequently on Crowning Glory. It was a narrow run through the woods and was so delightful in the powder with virtually no one else within eyeshot. It was one of those magical moments that I think I'll remember for quite some time.

Eating on the Mountain at Canyons

In terms of food, I ate lunch both ski days in the Red Pine Lodge that is located in the middle of the mountain on the Canyon's side just off the gondola and near the one lift for beginners. Like with most ski lodges, things weren't cheap. However, the prices weren't as bad as some meals I have had on mountains like Snowmass. You could reasonably eat here for $15 or less per adult if you were strategic about what you ordered.

There is a free water and phone charging station, and the chili, soup, and salad I tried over the course of the two days were all enjoyable...though the burgers smelled even better!

I've heard repeatedly that nearby Deer Valley is a great choice for newer skiers and their trail map certainly points to that being the case. However, Deer Valley is not in the "Epic" family as Canyons/Park City are, so just keep that in mind when deciding which lift tickets to purchase. Speaking of, Epic Passes for the 2017 - 2018 season are now on sale, and you can choose from anywhere from a four day Epic pass to a Epic season pass.

If you buy right now you also get discounted Buddy Passes to bring a friend for six days. If you are skiing at least four days next season at Epic properties, an Epic Pass of some sort is worth considering. I am currently debating between an Epic 7 day pass or going all in for a season pass. I have a booked trip to Whistler where I plan to ski 3 or 4 days, and I am 98% sure I will have a three night ski trip to Vail since I have free nights to use there as a result of the new-to-SPG Hotel Talisa Vail not opening up this year.

I also very much would not mind a long weekend trip to Keystone with my oldest daughter to ski and check out the Hyatt Place that should be open next season. That trip is more iffy, but all of those mountains and others like Beaver Creek, Breckenridge, and of course Park City are served by the Epic Pass. Buying an Epic Pass doesn't stop skiing from being expensive, but it does bring down the per-day rate anywhere from a little to a lot, depending on how many times you go.

Even if you don't opt for an Epic Pass, you still want to book your lift tickets online a week or so in advance to save a bit over the walk-up rates.

Final Words on Skiing With a Family at Canyons Park City

In summary, Canyons is a fine place to ski, but it isn't perfect, especially for those who need more than one green run to stay entertained, but aren't yet really comfortable on intermediate runs and above. If you are planning a family ski trip to this area and headquartering out of the Hyatt Centric Park City as we did, just keep that reality in mind so that your crew doesn't end up frustrated...or worse.

I fully intend on returning to Canyons/Park City, but it won't be my family's #1 mountain of choice in the foreseeable future simply because it will be a while before all of us are intermediate and above skiers. Even thought my oldest daughter is progressing nicely to blue runs, we have a second skier who will strapping on skis for the first time in the coming seasons.

I'd love to hear your thoughts and tips if you and your family have visited Canyons Park City!