Articles
Summer Hull , aka Mommy Points, ran the Mommy Points site for families who want to travel more for less using miles and points for seven years. She now heads up a variety of special projects at TPG when she isn't exploring the world with her own two girls.
Follow
April 24, 2016
•
9 min read 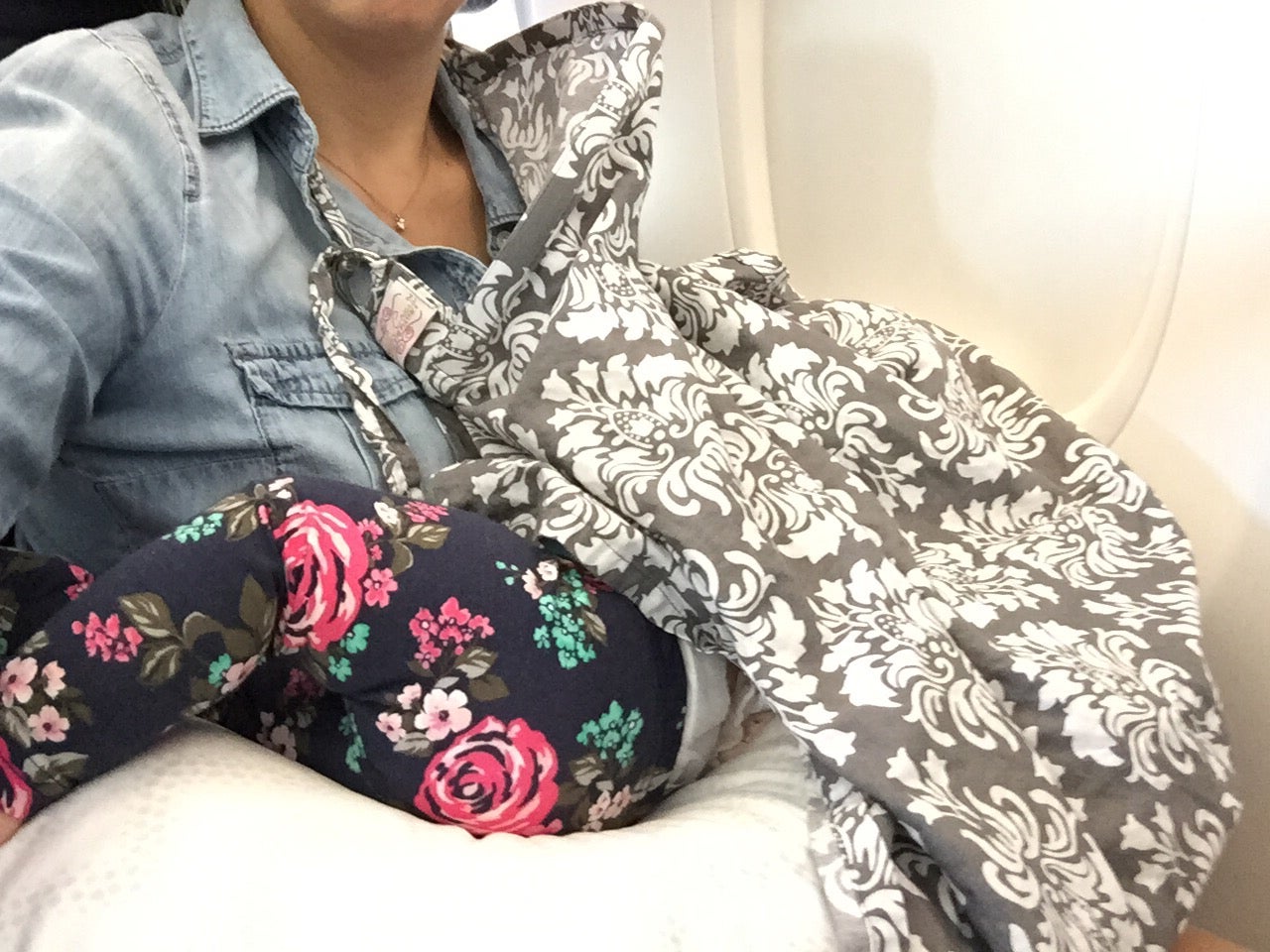 Completely Unacceptable Airport Rule Leads to Wasted Four Gallons of Breastmilk
This post contains references to products from one or more of our advertisers. We may receive compensation when you click on links to those products. Terms apply to the offers listed on this page. For an explanation of our Advertising Policy, visit this page.

It is 2016, and there is no longer any debate about whether breastfeeding or formula feeding is better for babies (and actually mothers, too). While of course I know that there are individual situations where that isn't possible or best for a variety of reasons, so please don't feel offended if nursing didn't work for your family.

In the United States, the 2013 CDC stats, which are the most recent available, show that 76.5% of US moms breastfeed at least once (though this varies wildly by state from 50% in some states to 90% in others). My hunch is that the 2016 numbers will be even stronger as our society supports nursing and nursing moms more and more - especially in the hours and days after birth with things like skin-to-skin contact, rooming in at the hospital, and routinely available lactation consultants. Update: The 2014 stats are actually available here and even better than the 2013 stats with 79.2% of US women nursing at least once.

For those not familiar, we aren't just talking about slightly better outcomes for nursed children. In fact, the World Health Organization states that "If every child was breastfed within an hour of birth, given only breast milk for their first six months of life, and continued breastfeeding up to the age of two years, about 800,000 child lives would be saved every year." That is a massive number of babies that would live instead of die and that doesn't even factor in all of the other increased outcomes for breastfed babies.

I write about nursing here as it relates to travel both because it is a family travel issue, and an issue that has grown increasing close to my heart. I nursed both of my girls, but stopped nursing my first daughter in large part because of a four day trip I wasn't taking her on at five months old. While that may have been best in some ways for me at the time as a first time mom who was learning to balance work, my own identity, and what it meant to be a parent, it was something I was not going to let interfere with nursing my second daughter.

After a pretty tough transition, my first did fine overall on formula starting at 4 or 5 months, but in the months after I stopped nursing she contracted RSV, Whooping Cough, and so many " respiratory bugs" that we eventually had to pull her out of daycare and have me work from home with special permission for a couple of months as she just couldn't get and stay healthy. If I had the ability to help keep my second even a bit healthier with the antibodies in breastmilk, I was absolutely going to do it. Of course, it has meant giving up lots of things that upset her tummy like dairy, soy, eggs, and more, but that has been the easy part. The hard part is the logistics of never being away from her for more than a couple hours.

The alternative if you want to or have to be away from your nursing little one is to pump milk and introduce bottles. This isn't fun. This isn't easy. Doing it away from home is even less fun and more difficult. However, there are those super star traveling moms who make it work and they have my utmost respect.

As you may have seen, a mom of an eight month old in the UK recently was on a 15 day business trip through 8 cities away from her nursling. To prepare for the trip she "pumped and froze milk during the day and in the middle of the night to feed my son with the hopes I would have enough to see him through my time away."

On the trip she "pumped at every possible moment between my meetings, presentations, business lunches and dinners, taxis, flights, and long waits in airports. This meant pumping while sitting on toilets in public restrooms; stuffed in an airplane bathroom; in unsecured conference rooms, showers, and closets because certain office spaces didn’t have a place for a nursing mother – and then dealing with the humiliation when a custodial employee accidentally walked in on me. It meant having to talk about my personal matters (my nursing schedule) with my professional coworkers and my supervisor in order to sneak away to said closet or public bathroom – a discomfort I had to learn how to swallow if I was to supply my son with breast milk. It meant going to each hotel and convincing them to store my giant insulated bags of milk in their restaurant freezers to preserve it. It meant lugging this giant block of frozen breast milk through four countries, airports and security checkpoints and having them pull out every single ounce of breastmilk and use mildly inappropriate sign language to convey "breast" and "milk" so that they would let me through. Which they did."

While on the trip she pumped 500 ounces, or 4 gallons of breastmilk, for her son. If you assume an average rate of consumption of about 32 ounces per day, that is just over two weeks worth of milk. While your own milk for your own baby really is priceless, if you were to buy that pumped milk (which is possible), it would potentially cost somewhere between $1,250 - $2,000, at least here in the United States. In other words, it is a very valuable (and impressive!) quantity no matter how you count.

However, the security folks at Heathrow would not allow her to take the milk with her on her flight home. Apparently they have the absolutely archaic rule that you cannot carry-on breastmilk if your baby is not traveling with you. Beyond that, which this mom admitted she didn't know in advance, she was not allowed to exit and check the milk as it was then deemed a "non-compliant item" that was to be confiscated and she could not then check it in her luggage. What??!!

She begged, pleaded, cried, and ultimately lost the two weeks worth of milk for her baby. This applied not only to the liquid, but the frozen milk which was a solid.

You can (and should) read her entire account here. My heart hurts for her both for being away from her baby for 15 days, but for losing something so good for her baby that she had worked so hard for during her time away.

It is 2016 and it is completely unacceptable for laws and regulations to continue to make it harder for moms to nurse their babies. I am tired of writing articles titled:

If there is no doubt that breastfeeding is not only good for babies, but unquestionably best for them, then there is no doubt that any and all barriers to making that easier should be eliminated. That includes those barriers that relate to travel, airports, airlines, and certainly security screenings protocols that are designed to make us safer. You cannot tell me there isn't some way to test or screen the milk, if absolutely necessary, to ensure it isn't some type of chemical or explosive. The World Health Organization recommends nursing babies until they are two year old, yet despite a 76% rate of US moms who nurse at least once, the number still nursing at just 12 months is only 27%. This tells me there are still too many barriers in daily life to continuing to nurse and pump month after month.

The good news is that for those traveling in the United States, the TSA does not have a rule that the baby must be traveling with the breastmilk in order for it to qualify as a carry-on. Instead the website states that you should inform the TSA officer at the beginning of the screening about the breast milk and the milk will be screened by x-ray, or you and the liquid can undergo additional screening procedures such as a pat down and inspection of all your items if you do not want it x-rayed.

Ice packs, freezer packs, frozen gel packs and other accessories required to cool breast milk are also allowed in your carry-on. If these accessories are partially frozen or slushy, they may also be subject to additional screening.

If you have to or choose to formula feed your little ones as I did at a certain point with my first, I think that is great that we have that as a solid alternative choice. Truly. However, if you and your partner make the choice to put convenience (and some of your personal dignity) aside and nurse your baby for as long as you can, then double thumbs up to you, and I am heartbroken and irate with you when anything makes that unnecessarily harder, especially as it relates to travel.

I know this still happens not only because of these stories that hit national media, but because of the emails and comments I receive from readers of this site.

I hope those in the UK lobby to change the rules and procedures that impacted this mom. I am thankful that overall breastfeeding or pumping and traveling here in the United States seems like it is getting a bit easier over time, and I hope in the coming years we have more stories like this and fewer stories of power trips and archaic rules making something so important to good outcomes for moms and babies so unnecessarily difficult. Until then, research research research the rules and policies for the airlines and airports that you will be transiting to be sure you are transporting your liquid gold in a way that is complaint to try and ensure it gets home to your little one safe and sound.