Review of United First Class on the Embraer 175

Articles
Summer Hull , aka Mommy Points, ran the Mommy Points site for families who want to travel more for less using miles and points for seven years. She now heads up a variety of special projects at TPG when she isn't exploring the world with her own two girls.
Follow
Feb. 07, 2016
•
5 min read 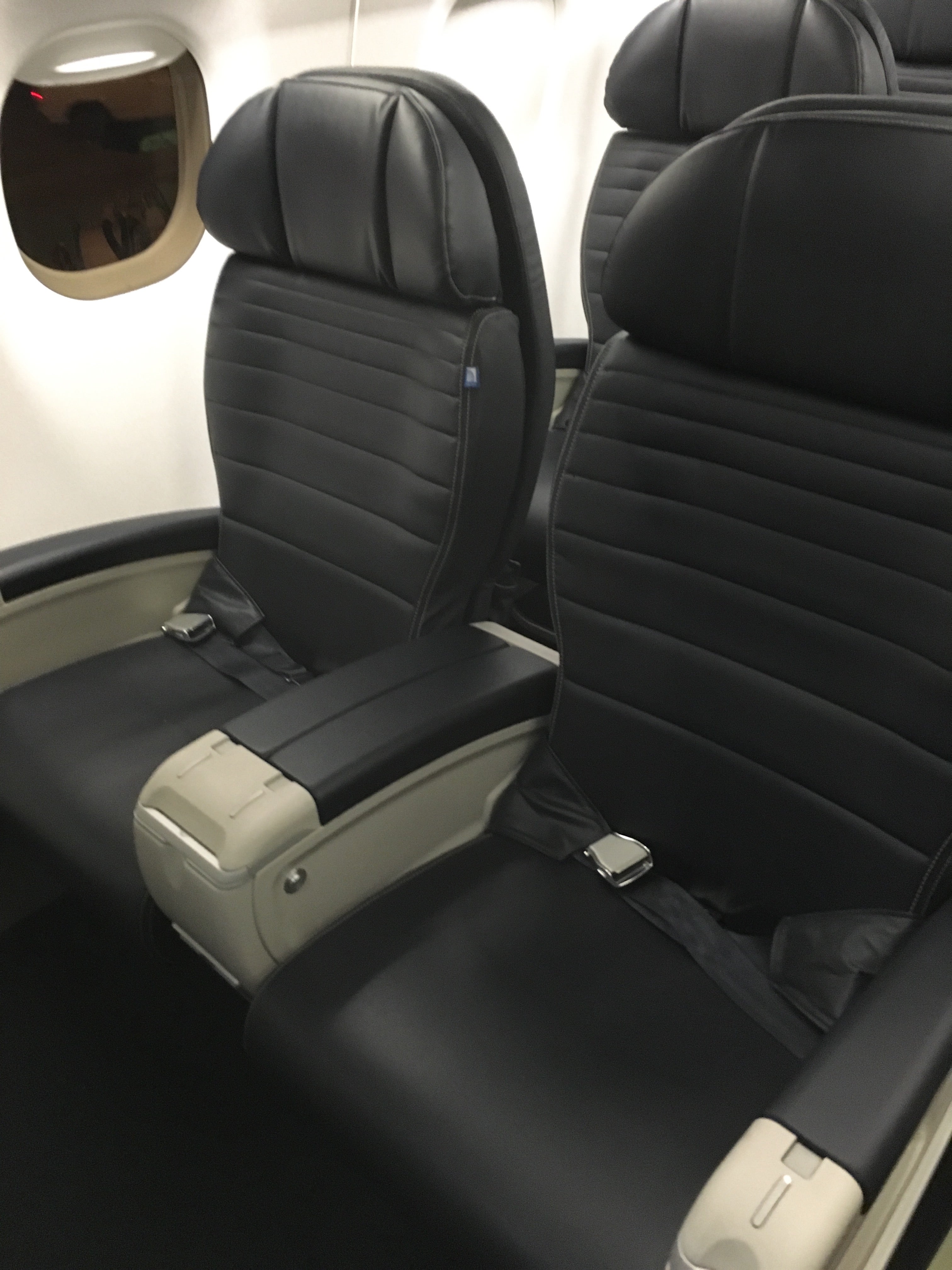 Review of United First Class on the Embraer 175
This post contains references to products from one or more of our advertisers. We may receive compensation when you click on links to those products. Terms apply to the offers listed on this page. For an explanation of our Advertising Policy, visit this page.

We recently flew United Express from Houston to Wichita, Kansas, a route that we have previously flown many, many times before due to having family in Kansas. Not surprisingly, our flights on this route have always been on a regional jet. I didn’t think much of our recent reservation in terms of aircraft type or seat assignments until the day before departure when I got an email that we our elite upgrades had cleared.

I knew we were already in E+ seats on the flight, and I wasn’t aware of any first class on the ERJs we had flown on this route before, so I was momentarily totally confused. It was only when I logged on and looked closer at our new seats on the United app that I realized we were on an Embraer 175 that has 12 first class seats in a 1 - 2 four row configuration. This aircraft type joined the United Express fleet in 2014, so it is a pretty new addition to the fleet.

It is a less than two hour flight, so none of this really matters all that much, but since I am traveling with a baby on my lap I certainly wouldn’t turn down some extra space!

We boarded on-time and unlike with previous regional jet experiences on United, the gate agent and flight attendants didn’t seem to be stopping every bag larger than a purse that headed down the jet bridge to tag it as gate checked due to size limitations on the aircraft, but instead they were encouraging people that their carry-ons should fit just fine…and judging by not seeing folks doing the walk of shame back to the front with their bags until the end when the bins were full, they were right.

My carry-on bag fits on every regional jet I’ve ever flown (often to the dismay of many agents), but it fit with total ease on this regional jet.

Sure these aren’t your fancy lie-flat first class seats, or really anything even close, but they looked down right awesome for a 542 mile journey.

We got settled in and the flight attendants offered a true pre-departure beverage service. This included not just asking if we wanted a cup of water (which would have been fine), but they actually served real drinks to everyone in first who desired one.

Once airborne, they came back around and offered an initial and then second in-flight beverage, served in an actual glass. There was no meal service on this short flight, but they did offer a snack basket with a variety of packaged snacks to those in first class.

The four rows of first class had power outlets in the event you needed them, and the flight was equipped with working Wi-Fi including free streaming movies for those with the United app.

The smooth flight landed 30 minutes early and honestly couldn’t have been better. I didn’t go into the flight hoping for any more than just a way to get from Point A to Point Grandma’s as quickly as possible, but the ride on a regional jet (with a lap baby!) was actually comfortable.

A look at the schedule shows that the E175 is not a common fixture on this route, and indeed our flight back home is on the more common 50 seater E145 that does not have a first class cabin, but I can guarantee I’ll be on the look-out for the 175 version as long as I have a shot at an upgrade. I don’t know that first class on a regional jet is worth paying much of a premium for in most cases, but if you can score the upgrade then you are in for a pretty nice short ride.

Our 542 mile United flight had a relatively large first class seat, good service, good beverage service both on the ground and in the air, a snack basket, streaming movies, working WiFi and power outlets…and it was 30 minutes early. I don’t see how you could possibly ask for anything better.

Our points-obsessed staff uses a plethora of credit cards on a daily basis. If anyone on our team wouldn’t recommend it to a friend or a family member, we wouldn’t recommend it on The Points Guy either. Our opinions are our own, and have not been reviewed, approved, or endorsed by our advertising partners.
See all best card offers
Related stories
News
Best-ever offers on IHG cards: Earn up to 175,000 points
News
Book Singapore Airlines business class to Europe with award space for the whole family
Guide
How to avoid fuel surcharges on award travel
Deals
Fly from LA to Honolulu for $200 round trip