Chase About to Shut Out Many New Applicants?

Articles
Summer Hull , aka Mommy Points, ran the Mommy Points site for families who want to travel more for less using miles and points for seven years. She now heads up a variety of special projects at TPG when she isn't exploring the world with her own two girls.
Follow
Feb. 16, 2016
•
4 min read 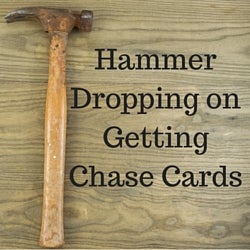 Last week I shared that the Marriott co-branded credit card issued by Chase had increased its sign-up bonus to 80,000 points (details here), and that sparked some discussion in the comments section about how hard it is to get Chase credit cards, and how it may be getting even harder in the near future.

For the last several months it has been harder, on average, for many to get many Chase branded credit cards such as the Sapphire Preferred, Freedom, and Slate. Many people with otherwise great credit would report being turned down due to having "more than 5 new accounts in the last 24 months". This does not mean more than five new Chase accounts, it means across all the banks. This spelled serious trouble for those who like to get more than one or two new credit cards per year. (The Chase Freedom is no longer open to new applicants)

The good news though was that this "rule" didn't seem to be applied to the Ink Plus Business Card or the co-branded credit card that Chase issues such as the United, Marriott, and Hyatt credit cards, among others. However, rumor is that will be changing in the near future. I don't have any inside intel on this, but I think it is a serious enough rumor to go ahead and share.

More Chase Cards Will Become Harder to Get?

According to Doctor of Credit (who generally seems to have valid intel on these sort of things), the "5/24 rule" is to spread to some business credit cards, such as the Ink Plus effective in March. This was bad news for sure, but not totally devastating since there are lots of great Chase issued products that are co-branded and presumably "safe" for rewards credit card enthusiasts.

However, as of last week the real hammer seems to be dangling overhead as word is that this 5/24 rule will also apply to co-branded personal and business Chase credit cards beginning around April 2016. This is basically terrible because Chase issues so many of my favorite co-branded rewards credit cards including those from United, Hyatt, Marriott, British Airways, Southwest, Ritz, Fairmont, and more.

It will still be possible to get those Chase cards, but it will take real strategy if you can only have five new card accounts among all of the banks every 24 months in order to get approved. Perhaps there will be some situations where the 5/24 rule isn't strictly enforced such as if you are targeted for an offer, apply in-branch via "pre-approved" applications, are a Chase Private Client customer, or otherwise get lucky. Read about a great example of breaking the 5/24 rule here.

Going on the working assumption that this is all going to come to pass, I will post again in a few days about how to prioritize obtaining Chase credit cards before "5/24" fully kicks in. For now, I recommend getting the Chase Sapphire Preferred as soon as you get into miles and points since it is already largely subject to "5/24" (so harder to get once you already have several other new rewards credit cards), and is a card I think is fantastic for a wide variety of point lovers.

Has Chase given you the "5/24" reason for a denied application? How are you preparing for this to potentially spread to all Chase credit cards?