10 of the Best Free Museums in the US 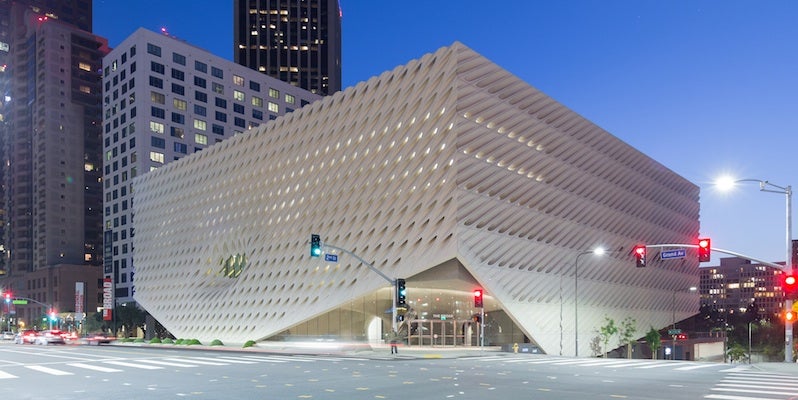 10 of the Best Free Museums in the US
This post contains references to products from one or more of our advertisers. We may receive compensation when you click on links to those products. Terms apply to the offers listed on this page. For an explanation of our Advertising Policy, visit this page.

It’s been an exciting year for museum openings and other cultural attractions, including the inauguration of the new Whitney Museum in New York City’s Meatpacking District and the recent opening of Downtown LA’s new Broad Museum. While there are plenty of ways to save on museum admissions, many great institutions are actually free to visit — and TPG Special Contributor Eric Rosen shares a few of the best around the US.

1. The Broad
LA’s newest museum opened in late September, just down the road from the Disney Concert Hall in Downtown. The Broad is the brainchild of billionaire husband-wife philanthropists Eli and Edythe Broad, and its dramatically perforated shell of concrete and fiberglass was designed by Diller Scofidio + Renfro — to the tune of $140 million. Housing a rotating collection of roughly 2,000 works from the Broads’ coffers, the museum focuses on contemporary and post-war art from around the world. So far, the most popular exhibits are Yayoi Kusama’s “Infinity Mirrored Room,” and a room full of Takashi Murakami's murals and psychedelic pop-culture-inspired sculptures.

It bears mentioning that not everything at The Broad is/will be free. The museum hosts one-off programs and seminars — including performances by the LA Philharmonic — and a series of talks (“The Un-Private Collection”) that pair up popular artists with celebrities in other fields, such as Jeff Koons and John Waters. Later this fall, the museum will also be home to one of Downtown’s most buzzed-about new restaurants, Otium, courtesy of restaurateur Bill Chait and chef Tim Hollingsworth.

It feels like cheating to list the Smithsonian as a single place, since this sprawling destination is actually a collection of 19 museums and galleries that are largely free to enter. No-cost highlights include the Air & Space Museum, which houses the Wright Brothers’ original 1903 flying machine, Lindbergh’s Spirit of St. Louis and even the Apollo 11 command module; great monuments of modern art at the Hirshhorn Museum and Sculpture Garden (especially if you like Rodin’s work); and the National Portrait Gallery's complete collection of presidential portraits. For a staggering collection of American memorabilia that includes the original Star-Spangled Banner from Fort McHenry, George Washington’s war uniform, Jefferson’s writing desk and even the ruby slippers from The Wizard of Oz, be sure to visit the National Museum of American History.

Representing a tragic chapter in American history, The Alamo nevertheless remains a point of pride in Texas, and more than 2.5 million visitors pass through it each year — for free.

The compound is composed of four buildings — Alamo Hall, the Shrine, the Long Barrack and a gift shop and museum; the latter explores the history of Texas and how the Alamo figured into the Texas Revolution. Located right in the heart of downtown San Antonio, near the city’s famous River Walk, the Alamo is a convenient, fascinating stop on any visit to the city.

You might base a trip to Cleveland on a visit to the Rock and Roll Hall of Fame, but be sure to make time for a stop at the city’s premier art institution as well. Founded in 1913 with the mission of being “for the benefit of all the people forever,” the museum is not only free to enter, but also houses one of the country’s finest public collections of artwork.

The mammoth permanent collection spans millennia, with art from ancient Asian, Greek and Roman civilizations; pre-Columbian peoples in the Americas; European art ranging from the Middle Ages to the present; and portraiture, textiles, decorative arts, sculpture and more. In addition to thought-provoking special exhibits, the CMA also hosts free lectures, readings, performances and concerts, so be sure to check event listings before planning your visit.

5. The Museum at the Fashion Institute of Technology (FIT)

New York City is home to dozens of museums, but among the most interesting (and likely most overlooked) is this fashion-centric one in Chelsea. The building houses three distinct galleries that exhibit the permanent collection, exhibitions by current students and faculty, and visiting exhibitions that rotate about twice a year.

The permanent collection includes over 50,000 garments and accessories dating from the 18th century to the present, and includes stunning one-of-a-kind works by Chanel, Dior and Balenciaga, among others. Past rotating exhibits have included award-winning retrospectives on topics like the fashions of London, the history of the corset, the evolution of the Goth look as well as one titled, “A Queer History of Fashion: From the Closet to the Catwalk.”

It’s hard to believe that this collection started with just a single painting back in 1914, as more than a century later, the Baltimore Museum of Art now boasts around 95,000 pieces. The permanent collection ranges from the Middle Ages to the present, and highlights include the world's largest collection of Matisse’s work, and Renoir’s On the Shore of the Seine, which was stolen from the museum in 1951 and returned in 2014. After being lost for more than 60 years, this Impressionist painting is now once again on display — and for more on its fascinating story, check out this article from NPR.

You’ll also find other recognizable names ranging from Picasso to Van Gogh, and Cezanne to Warhol. The BMA's contemporary wing is also home to more than 100 paintings, sculptures and photographs by luminaries like Jasper Johns, Robert Rauschenberg and Olafur Eliasson. The outdoor sculpture gardens here are also a big draw.

Just a quick note that the museum is currently still in the midst of a $28-million renovation, and the work is slated for completion later this fall. If you'd like to see the museum in all its new glory, check the museum's site for updated news on the remodel.

If you like Asian art, you’re in luck at the MIA, whose main collection spans 5,000 years and includes everything from paintings to ceramics to silk textiles. Here you'll also find impressive collections of African art, including sculpture and jewelry; Native American galleries featuring artifacts like a 3,000-year-old Olmec jade mask; and a fabulous collection of around 900 European and American paintings that date from the 14th century to the present. Keep an eye out for Rembrandt’s Lucretia, as well as choice works by Georgia O’Keefe, John Singer Sargent, Van Gogh, Degas, Goya, Chuck Close, Roy Lichtenstein and Salvador Dalí.

This museum’s benefactor, Charles Frye, was the son of German immigrants. He came to Seattle as a young man in 1888 and along with his wife, Emma, became a huge collector and patron of the arts. The couple gifted their collection in perpetuity to the people of Seattle, and it became the founding collection of the Frye Art Museum when it opened in February 1952. Since then, The Frye has been attracting visitors with its unparalleled collection of late 19th- and early 20th-century American and German art.

Current special exhibitions include one on “Favorites: the Frye Founding Collection,” and another titled “Genius/21st Century/Seattle,” celebrating multidisciplinary, collaborative art in the city.

9. The Getty Villa and Getty Center
Both the original Getty Villa in Malibu and the newer Getty Center in central Los Angeles offer free admission. At either museum, you just need to pay for parking by vehicle, so pile a bunch of people in your car to get more bang for your buck.

Perched on a cliff above the Pacific Coast Highway and overlooking the ocean, The Getty Villa is home to the bulk of the Getty Foundation's antiquities collection, including impressive ancient Greek and Roman frescoes and sculptures. Several of these sculptures are arranged around a long reflecting pool with elaborate fountains; a stroll here will make you feel far from not only LA, but possibly the US, as well.

An imposing structure set on a ridge above the 405 freeway with sweeping views from the ocean to downtown, The Getty Center houses the Getty’s main collection of pre-20th-century European paintings, drawings and sculptures (you can find Van Gogh’s Irises here), as well as American, European and Asian photography, contemporary sculpture and a garden designed by landscape artist Robert Irwin that includes more than 500 kinds of plants.

Feeling patriotic? On your next trip to Boston, be sure to visit “Old Ironsides,” otherwise known as the U.S.S. Constitution. This famous warship was commissioned in 1797, and is the oldest one in the world that's still afloat. Visits are free, and include the chance to catch guided tours given by active-duty US Navy sailors in the Charlestown Navy Yard. The associated museum (which is back onshore) includes an exhibit on the history of this extraordinary ship, its famous battles and restoration, the trials and travails of life at sea, and more. All hands on deck!

If your travel plans take you to a museum that doesn't offer free admission, you can at least leverage your purchase to get additional rewards. The Citi Premier® Card, for example, offers 2x points on entertainment, including museums. And with the current sign-up offer, you'll earn 60,000 ThankYou bonus points after spending $4,000 in the first three months of account opening.

What is your favorite museum that offers free admission?