Articles
Summer Hull , aka Mommy Points, ran the Mommy Points site for families who want to travel more for less using miles and points for seven years. She now heads up a variety of special projects at TPG when she isn't exploring the world with her own two girls.
Follow
Sept. 11, 2015
•
4 min read 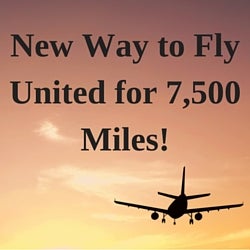 New Way To Fly United Flights From 7,500 Miles!
This post contains references to products from one or more of our advertisers. We may receive compensation when you click on links to those products. Terms apply to the offers listed on this page. For an explanation of our Advertising Policy, visit this page.

Rarely is it a good thing when an airline adds new zones to its award chart, but there is a very big exception via the LifeMiles award chart. I haven't written about the LifeMiles award program in a long time because it took me a while to get over the headache(s) I suffered when trying to change a LifeMiles award last year (and who has time for award ticket induced headaches). However, now that some time has passed, and these new award rates have been introduced, it's time to look at them again.

For those not familiar, LifeMiles in the frequent flyer program for Avianca, a South American based Star Alliance airline. This means that you can use their award miles to fly on Star Alliance member airlines, such as United. Some like to use LifeMiles to book fancy premium cabin international awards on airlines such as Lufthansa since LifeMiles doesn't charge fuel surcharges, has no last minute ticketing fees, permits one-way awards, and more. Note that they do charge a $25 booking fee regardless of when you book the ticket.

Using LifeMiles for those fancy international flights can be a good idea, but right now I'm a bit more simple minded and I'm very interested in the new development that has domestic awards in the US on Star Alliance partner United available for as low as 7,500 LifeMiles each way! Thanks to Mighty Travels for pointing this out!

LifeMiles has divided the United States up into three zones as shown below. Travel within the same zone is now just 7,500 miles each way!

Travel between zones can also be less than the standard 25,000 miles that United would charge for a saver award.

In practice this means I could fly Houston - Orlando - Houston on United for just 15,000 total LifeMiles since both Texas and Florida are in Zone 2. That is much less than the 25,000 miles United would want for the exact same flights!

If you don't currently have LifeMiles you can still participate in this new award chart sweet spot since LifeMiles sells their miles, and right now they are doing it with a nice bonus of up to 135% based on the number of miles purchased through September 30th (terms do state you had to be a LifeMiles member as of 9/7/15 to get the bonus). With the promo you can buy LifeMiles for as low as 1.4 cents each via a tiered bonus that gives you additional bonus miles the larger your purchase is - with the largest bonuses requiring pretty huge purchase amounts. MileValue breaks down the prices for the sale in detail here.

Keep in mind you can also use miles + money for LifeMiles awards where you are essentially purchasing miles at 1.5 cents each at the time of booking the award - though you can only do that if you have at least 40% of the miles required for the award available to use.

I don't recommend spending tons of money on purchasing LifeMiles miles until you really have a good feel both for how the program works and for how you plan to use the miles, but it is possible to come out way ahead via this program, especially with the new discounted awards within the US. They certainly have regained my attention!

What do you think of the new domestic award chart?