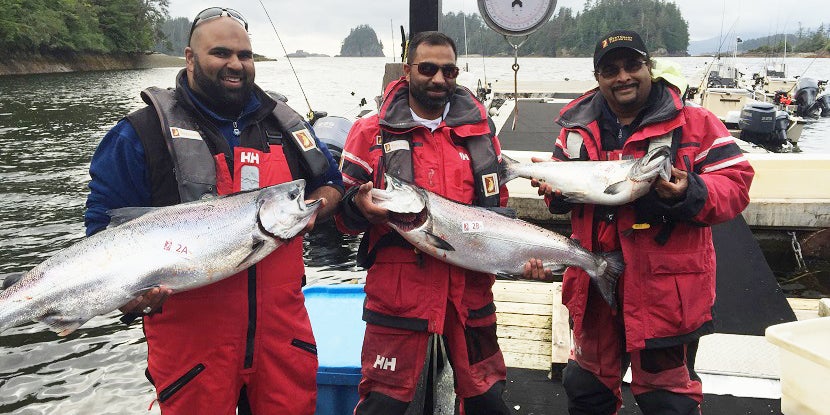 The Ultimate Guys' Fishing Weekend
This post contains references to products from one or more of our advertisers. We may receive compensation when you click on links to those products. Terms apply to the offers listed on this page. For an explanation of our Advertising Policy, visit this page.

Having recently returned from the holy grail of guys' weekends, TPG Contributor Muhammad Lila shares his experience with the West Coast Fishing Club, a Vancouver-based charter fishing outfitter that specializes in high-end outdoor adventures. As he explains, you’ll trade tents and mud for high-thread-count sheets and delicious, chef-prepared meals.

What happens when you mix 14 men of varying ages and sizes (read: my family), a charter flight, a pair of helicopters and many, many miles of rugged Canadian coastline without a single soul in sight? You get the most exclusive, luxury-filled guys' weekend you can possibly imagine.

This trip isn’t cheap — The West Coast Fishing Club caters to a pretty exclusive clientele of celebrities, athletes, CEOs and hardcore fishing enthusiasts — but you're sure to bond with each other, dine well and bring in a haul of some of the biggest darn fish you’ve ever seen.

My journey kicked off with a flight to Vancouver (YVR) on a Thursday night. I'd found a great award from Toronto (YYZ) to YVR that would allow me to use just 12,500 Aeroplan points on Air Canada’s new 787 Dreamliner — to book, you can transfer points from American Express Membership rewards to Aeroplan, or you can transfer points from Chase Ultimate Rewards to United. The best option for earning points to book this flight is to sign up for the Chase Sapphire Preferred card, which awards 40,000 bonus points after you spend $4,000 in the first three months. You can transfer those points instantly to United at a 1:1 ratio, giving you more than enough for a round-trip flight to Vancouver. Unfortunately, a few meetings in New York City that week meant I had to fly United (on their not so new 737's) from New York-La Guardia (LGA)-Chicago (ORD)-Vancouver (YVR), instead.

The West Coast Fishing Club recommends that its guests arrive Thursday evening in Vancouver, to reduce any chance of missing the Friday morning charter flight to the fishing lodge (if you miss it, you’re kinda screwed). They’ve negotiated preferred rates at the Rosewood Georgia Hotel ($249 CAD/$188 per night), Fairmont Vancouver Airport ($229 CAD/$173 per night) and Pacific Gateway Hotel ($145 CAD/$110 per night). At the time of my booking, the best available online rate at the Rosewood was around $350 CAD/$265 night, so it turns out that the WCFC's rate — at least for that one property — is a pretty good deal.

Friday morning, our group adventure officially started. We checked in at YVR's South Terminal, and were then whisked away on a leased Air Canada Jazz Dash-8 turboprop for the two-hour flight to the tiny village of Masset, British Columbia. Don’t expect any in-flight entertainment, but who needs it? The scenery outside is stunning.

After a short stopover in Masset, the real fun began. Two chartered helicopters flew us through the clouds and along the amazing British Columbia coastline — thick rainforest on one side, the Pacific Ocean on the other.

The WCFC has three private fishing lodges. Ours was The Outpost, a 14-person luxury cabin that’s so remote, the only way to access it is by boat or helicopter, the latter via its own dockside helipad.

Remember that summer cabin you stayed at during summer camp? The Outpost is just like that — but on steroids.

The lodge comes with everything a bunch of guys could ever want on vacation. Pool table, fireplaces, plush carpets, two hot tubs, a basketball court, panoramic views of the water, unlimited drinks and a fleet of outrigger boats that will take you to secret fishing spots to land the biggest haul of your life. They even provide anti-nausea patches that take about 12 hours to kick in; once they do, you’re good to head out in any weather condition.

And speaking of weather, the WCFC also provides custom-fitted rain gear, including coveralls, jackets, hoods, boots and all fishing equipment/tackle. The guides will even set up fishing lines for you, so that all you have to do is sit back and relax, and before you can finish singing the lyrics to “I’m on a Boat,” you’ll be reeling in your catch.

And by biggest haul, I mean holy-cow-these-fish-are-so-insanely-huge-I-need-to-Instagram-this-right-now kinda big. For instance, my brother, Ali, pulled out a 235-pound halibut that took him 20 minutes to reel in — but which he released because it was too big. The youngest of our clan, Owais, pulled out a 160-pound halibut the same day, and all of of us came back with at least 50 pounds of fish apiece – including coho, chinook, tyee, lingcod, rockfish and skatefish.

We typically spent our days on the water, with a two-hour break for lunch, and evenings by the fire or in the tub. Meanwhile, the West Coast Fishing Club will filet, vaccuum-pack and freeze your catch, putting the pieces into coolers for you to take home.

The Outpost comes with its own husband-wife team of executive chefs — Paul Moran and Stephanie Noel — both ranked among Canada’s best. In particular, Paul recently won San Pellegrino's "Best Chef Under 30" award in a nationwide contest. I’ve eaten in some of the best restaurants in the world, and and after sampling Paul and Stephanie's cuisine, I’m confident that they could out-create many of their Michelin-starred colleagues.

Meals are served communally, and like everything else, can be tailored to whatever schedule or cravings you have. At one point I asked for some homemade masala chai, and within a few minutes, there were five steaming mugs of the milky tea waiting on the drink bar.

During our weekend, a day’s sample menu looked like this:

A four-night trip to The Outpost is listed at around $5,000 CAD ($3,783) per person. Even with the low value of the Canadian dollar, this still isn't exactly a bargain, but for most of my group, this was a once-in-a-lifetime trip. Plus, if you’re an avid TPG reader, you know that the best travel adventures don’t just save you money; they also create memories — and that’s exactly what the WCFC offers.

The Outpost gave me the most worry-free vacation I’ve ever had. I reconnected with family, had a great time on the water and came back with a renewed focus and energy. Plus, the bragging rights to say I wrestled a giant halibut off the coast of Alaska ... and won.

There’s no price you can put on that.