Your Layover Guide to Seoul (ICN)

Articles
Lori Zaino is a writer for TPG and TPG UK covering travel, news, points and miles and more. She's been based in Madrid, Spain almost 15 years and is an expert in travel throughout destinations such as Europe, Southeast Asia and Africa.
Follow
June 10, 2015
•
8 min read 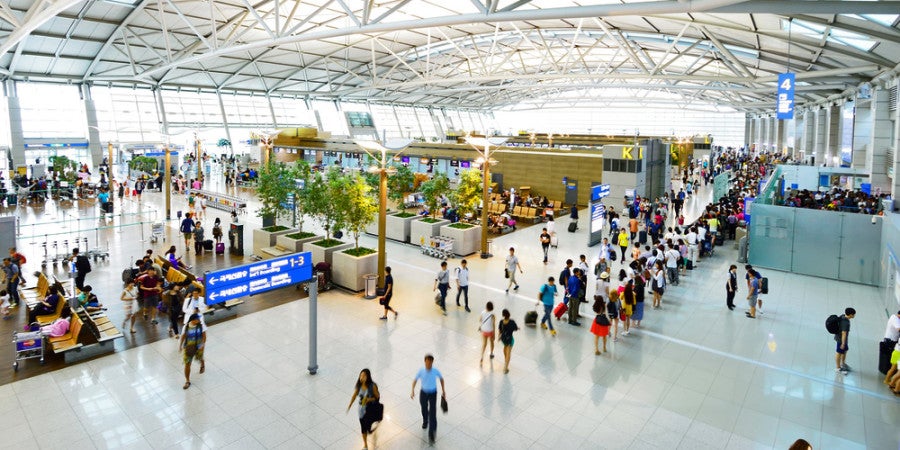 Your Layover Guide to Seoul (ICN)
This post contains references to products from one or more of our advertisers. We may receive compensation when you click on links to those products. Terms apply to the offers listed on this page. For an explanation of our Advertising Policy, visit this page.

The “Your Layover Guide” series features airports and destinations around the world where you’re likely to be stuck between flights, offering tips on navigating and spending time in the airport, as well as suggesting things to do if you have time to explore the nearby city. TPG International Contributor Lori Zaino guides us through Korea's biggest airport, Seoul Incheon (ICN).

Welcome to Incheon International Airport, which was recently voted the world's second-best airport for the third year in a row — coming in closely behind Singapore Changi. The main hub for Asiana Airlines, Korean Air and Jeju Air, Incheon is a good 30 miles from Seoul's city center (as opposed to its smaller sister airport, Gimpo (GMP), which is just nine miles from downtown Seoul). That said, ICN prides itself on efficiency, and airport authorities claim that it takes much less time to get through its security and customs than it does at other airports around the world.

Besides, there's a ton to do at Incheon, so no matter the length of your layover, you may not even want to leave!

Besides offering what we may consider the best possible amenity — free Wi-Fi — ICN also has an observation deck to watch the planes taking off and landing; cactus, flower, water, pine tree and rock gardens (1F Passenger Terminal); and free concerts daily throughout the airport.

For a shower, sauna or massage, visit Spa on Air, which also includes napping rooms (B1, East Side). If you’re traveling with children, take them to one of the seven play areas located throughout the airport. To get some of that energy out, visit the Sky 72 Golf Club, or the Skating Rink. Catch a movie at the theatre or try your luck at the Casino (located in the Hyatt Regency Hotel, just two minutes away from the airport by free shuttle bus).

The airport has loads of coffee shops, fast food and western options, as well as a few traditional Korean restaurants such as Haneul, offering options such as beef rib soup and spicy tofu with seafood stew (public area, 4F) or Gongxiansheng which serves up steaming-hot Chinese cuisine.

For shopping, there are plenty of duty-free shops, and you can purchase Korean skincare products at SkinFood (Public area 1F) and Etude House (various locations). For kitschy souvenirs and children's toys, Jane-art is definitely the spot (3F, Near Check-in Counter G).

Baggage storage is provided by Korean Express Parcel Service (west side of the Passenger Terminal, starting at $2.50).

There are a variety of buses heading to different places in the city. If you stop and ask at the yellow booth before you exit and explain where you are going, they will tell you exactly which number bus to take. The buses usually take an hour and 20 minutes to two hours, so make sure to give yourself plenty of time if you have a tight layover. To visit the grand Gyeongbokgung Palace (my suggested one-day itinerary), take the airport bus 6011 in front of Bus Station B, and get off at Palace (Bus arrives every 25 to 30 minutes, and the ride is about one hour and 30 minutes). Take bus 6011 at the bus station across from where you got off to return to Incheon International Airport.

Incheon actually organizes tours for especially for passengers who have layovers. You can book your tour ahead of time or at the transit desk at the airport upon arrival, which has two locations:

There are a variety of tours and times provided to suit a range of tastes and lengths of layover. You have options such as the Incheon City Tour, Seoul City Tour and Temple Tour. The length of tours ranges from one hour to five hours, and each offers an English-speaking guide. The best part: These tours are free! However, you'll still be responsible tourist-site admission fees, meals and tips.

One day in Seoul is the perfect amount of time to explore a palace. One of the most popular, Gyeongbokgung Palace, is the former royal palace of the Joseon dynasty, dating back to the 1300s. The palace is surrounded by peaceful gardens, offering a tranquil escape from the busy city of Seoul. Besides visiting the palace buildings and sprawling grounds, the entrance fee of 3,000 Won ($2.75) also gives you access to both the National Folk Museum of Korea, which is topped with a beautiful pagoda, and the National Palace Museum, which provides a full overview on royal living. Make sure to catch the changing of the guards ceremony (complete with period costumes), which typically occurs at 10am, 1pm and 3pm.

Then wander over to the Bukchon Hanok Village to see hundreds of traditional “hanok” Korean houses and buildings. Today these buildings operate as teahouses, guesthouses, shops, museum and more. A walk through the village offers a real perspective into traditional South Korea.

Finally, no trip to Seoul is complete without a delicious Korean barbecue dining experience. Mapo Sutbul Kalbi, Myongwolgwan, Parkdaegamne and Hankook Bon Galbi are some delectable options for indulging in some serious Bulgogi (Korean meat).

TPG recently had a fabulous, yet short, stay at the Ritz-Carlton Seoul, located in the upscale Gangnam district of Seoul. Although the rooms and features are slightly dated, the location is unbeatable. Room rates start at about $250 or 40,000 Rewards points per night. Keep in mind that using one of these two credit cards could get you a free room at The Ritz-Carlton, Seoul: the Ritz-Carlton Rewards Credit Card or the Marriott Rewards Premier Credit Card.

Another good option is the JW Marriott, which has a great location in Dongdaemun Square and rooms starting at about $250 or 35,000 Rewards points per night. The Park Hyatt Seoul (where TPG stayed back in 2012) is nice, but a little far from the city center; rates start at about $350 or 20,000 Hyatt Gold Passport points per night.

The SPG Category 5 W Seoul Walkerhill offers rates starting as low as $189 or just 12,000 Starpoints per night and some gorgeous views overlooking Seoul, though be aware that (as its name implies) it's about a 15-minute — sometimes steep — hike from the touristy Gangnam District and other, more central attractions.

Related stories
Save money with these travel-related offers on your credit cards this month
Use these shopping portal bonuses to earn extra miles this holiday season
Using miles and points to book airline tickets and hotels for others
Maui magnificence: A review of Kaanapali Alii, a Destination by Hyatt Residence
Editorial disclaimer: Opinions expressed here are the author’s alone, not those of any bank, credit card issuer, airline or hotel chain, and have not been reviewed, approved or otherwise endorsed by any of these entities.