Articles
Lori Zaino is a writer for TPG and TPG UK covering travel, news, points and miles and more. She's been based in Madrid, Spain almost 15 years and is an expert in travel throughout destinations such as Europe, Southeast Asia and Africa.
Follow
May 23, 2015
•
9 min read 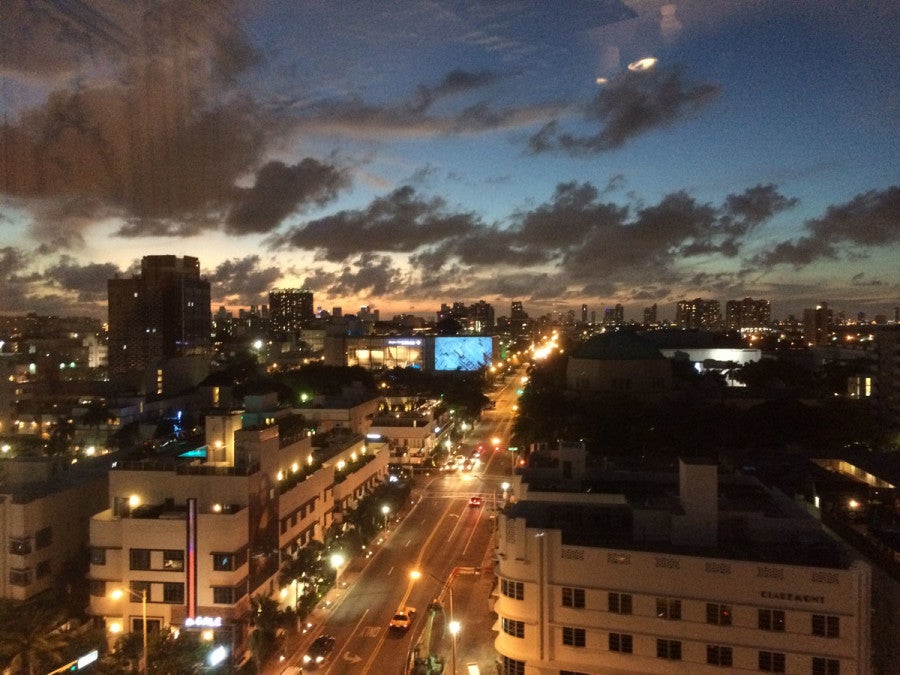 Hotel Review: SLS South Beach in Miami
This post contains references to products from one or more of our advertisers. We may receive compensation when you click on links to those products. Terms apply to the offers listed on this page. For an explanation of our Advertising Policy, visit this page.

Earlier this year, TPG Travel Editor Melanie Wynne and TPG International Contributor Lori Zaino both stayed at the SLS South Beach in Miami, Florida on official TPG business. Below is Lori's review of their combined experiences at the hotel.

As boutique hotel lovers, Melanie and I were excited to try out the uber-trendy SLS South Beach, where raging pool parties and resident chef José Andrés have made the property a Miami hotspot. Set in the heart of South Beach on Collins Avenue, it's close to several other hotels, a ton of restaurants, Lincoln Road shopping and the beach itself.

We were able to book our rooms on Orbitz, and though they certainly weren't cheap at roughly $400 per night (plus a $30 resort fee which allows you use of the WiFi, gym, pool and chairs on the beach) we were able to get a discount using an Orbitz promo code and earned double Chase Ultimate Rewards points by paying with our Chase Sapphire Preferred Cards.

It's worth noting that there isn't much of a lobby. It didn't bother us much, but if you're expecting the grandeur of a large lobby with plush chairs and chandeliers everywhere, this isn't your spot.

We both arrived before the official check-in time of 3pm, but while Melanie was able to get into her room around 11am, I had to wait a few more hours for my own room to be ready. The front desk staff kindly explained that we were welcome to use the pool, fitness room and beach chairs while we waited, so I headed down to the pool right away to enjoy some sun. When we asked if there were any room upgrades available, we were told the hotel was completely full. Ah, well.

We each had a Premier City View room with a king bed. As promised, our views were of the city and rather impressive, though an ocean view from the opposite side of the hall would have been even nicer. Decorated in a subtle, sexy manner, with airs of French aristocracy and a dash of high design, the room was a good size for one person, but Melanie and her companion found it a little tight for two.

The not-so-subtle mirror on the ceiling above each bed reminded us both that we were officially in South Beach — and that this is a hotel largely intended for grown-ups.

Each of our rooms came equipped with a large king bed and two small bedside tables with an iPod dock/alarm clock/radio on one and a telephone on the other. The organic twisted-metal wall sconces were saved from being creepy by a nice coat of whitewash, and a precious few inches to one side of the bed, a fainting couch-style sofa ran alongside the window.

A flat-screen TV dominated the wall in front of the bed — over an image of a fireplace mantle — and in the far corner was a movable mini-desk and a simple chair.

On the opposite side of the bed, a large, shiny grid of chrome and glass housed an extensive mini-bar (more like a maxi-bar, really) with bottles of top-shelf liquor and various waters, seemingly all the snacks on Earth (divided into two categories, Saints and Sinners), two large drawers (one containing a pink safe) and one narrow, rectangular space for hanging clothes that was largely taken up by two plush robes.

One of the biggest criticisms I read in reviews of the hotel was the lack of a closet or much in the way of hanging space. I found the two huge drawers and a small hanging area sufficient for one person, but Melanie and her travel companion were only able to hang one item apiece, and had to otherwise store their suitcases on the floor. If you're not traveling alone and want to book this particular room type, it's advisable to pack light.

The bathroom in each room was quite large and featured a large open shower, a toilet and a small vanity and sink area with CIEL amenities, which have a soft, pleasant coconut scent.

Personally, I'll never understand this shower design, as I manage to flood the bathroom every single time I use one. Melanie loved the water pressure in hers, but agreed that the wet bathroom floor thing is a (potentially dangerous) hassle.

However, aside from the open shower and having to hunt for available plugs to charge our electronics (by the night-tables is always where you want to put these, hotel designers), we both enjoyed our rooms for the same reasons. We loved the pink, black and white color scheme, the king beds felt like soft-cotton marshmallows and lounging around in the bathrobes felt luxurious after a long day of editorial planning. The rooms were pretty well-soundproofed, offering each of us a good quality of sleep.

The staff at the SLS were friendly, accommodating and efficient. They allowed me to have a late checkout at 1pm (rather than the usual 11am) for no extra charge. I came down the first evening of my stay hoping for some of the free coffee they normally set out (hello, jet lag) and was dismayed to find that they only offer it in the mornings. However, the front desk attendant told me to wait a moment, and he came back with a latte from the bar for me, free of charge. As I sipped the coffee, I chatted with both the desk attendant and the concierge, Rosa, who was really sweet.

There are two pools at the SLS. One is beside the outdoor cafe, while one is closer to the beach. The latter is free to enter for hotel guests (just present your room card), but is essentially a Vegas-style pool party beside the Atlantic Ocean, where bouncers guard the ropes and and twenty-somethings swan around in stilettos and itsy-bitsy swimsuits to a soundtrack of booming techno remixes. We both preferred the calmer environment of the main pool, despite the fact that it's partially set in the shade.

If you're looking for a relaxing afternoon lying in the sun (or at least more of it), your best bet is to head back to the SLS' beach, where your $30 resort fee entitles you to two chairs simply by flashing your room key.

As a woman who lives in Spain, I have to say that the tapas-inspired menu at the main restaurant, The Bazaar by José Andrés, didn't particularly impress me, and I didn't have a chance to eat at the on-site Katsuya sushi restaurant. However, both of these restaurants are fixtures near Melanie's home in Los Angeles, and she assures me that in that city, at least, they're both solid operations that serve tasty, creative food in swanky settings.

I enjoyed two mornings' worth of room-service breakfasts, with delicious eggs, avocado and a fruit plate one day, and sweet, indulgent waffles another. Down in the lobby one morning, Melanie enjoyed nibbling on the little things at the fancy buffet, including tiny homemade yogurt-and-fruit parfaits and mini-muffins adorned with gold leaf, but she found the breakfast menu (and darker coffee) next door at Kimpton's The Social Club to be heartier and less fussy. And though she's used to pricey drinks on her travels, she was surprised that the Bar Centro's small cocktails cost about $20 apiece.

We had lunch together out on the poolside Terrace one day, and this was an all-around success — don't miss the Media Noche Sliders with roasted pork belly or the SLS Club Sandwich with a fried egg, and be sure someone at the table gets the tropical plantain chips.

Set in an ideal, central location, the SLS South Beach is just what a boutique beach property in Miami should be: sexy, cool, trendy and fun. I would definitely stay here again, though in the future, I think I'd make reservations for sushi, then head straight down to the beach or, like Melanie did, explore the pool scenes at neighboring hotels such as Kimpton's Surfcomber and the Shelborne Wyndham Grand. The best way to experience the pools at the SLS are from the Terrace, with a hand-crafted soda and a tasty sandwich.