Articles
Zach Honig is Editor-at-Large at TPG, with contributions ranging from articles digging deep on loyalty programs and credit cards to delivery flight coverage to drone photography and much more.
Follow
May 08, 2015
•
3 min read 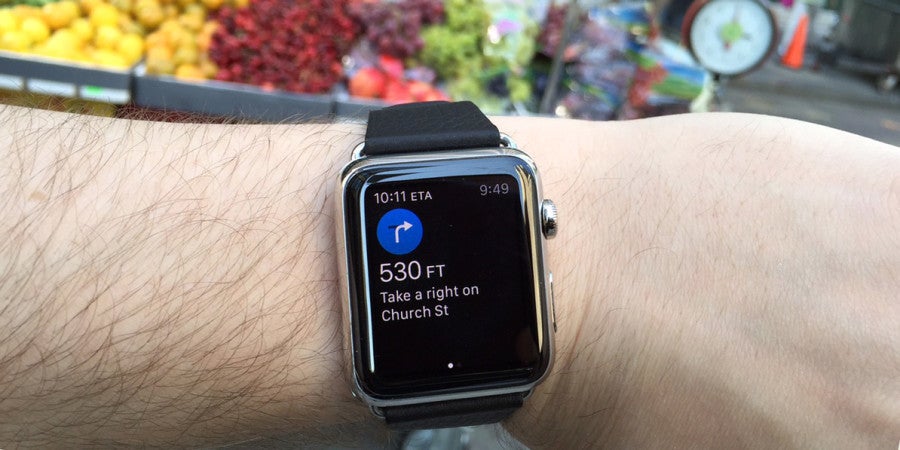 Navigating New York City with Apple Watch
This post contains references to products from one or more of our advertisers. We may receive compensation when you click on links to those products. Terms apply to the offers listed on this page. For an explanation of our Advertising Policy, visit this page.

While The Points Guy headed down south for a long weekend, he left his Apple Watch with me. I put it to work right away, identifying my preferred watch face, loading up on apps and, as you’ll see below, finding a new way to get to work.

Now, I've lived in New York City since 2008—give me an address and I'll probably be able to get myself there without pulling up an app. But that doesn't mean my route is the most efficient, and while that's mostly by design (the more direct routes tend to be those most heavily trafficked by tourists), if I'm running late I'll consider switching things up.

So, I decided to have Apple Watch help me get from my apartment in the Financial District to our office in SoHo. Opting to use Siri to get things going, I started my commute by awkwardly lifting my wrist to my face and saying "navigate to..."—but that loaded driving directions. I tapped again to clarify "show me walking directions to...," and that seemed to do the trick. My destination popped up, followed quickly by my first step, and I was on my way.

The walk usually takes me a hair over 25 minutes, but Apple Watch said it could be done in 24. Game on. My usual trek down Broadway (wider sidewalks and less construction), which Google Maps is a-okay with, wasn't an option with Apple's app equivalent. And, for now, you can't use Google Maps with an Apple Watch. Still, I really wanted to walk down Broadway, so I started walking my usually route.

The watch vibrated just before the first intersection, and again at the next and then at the one after that. Then I had a few minutes to walk in peace until the watch decided to nudge me again. Fine—we'll do it your way, stupid watch. It adjusted quickly and I walked in a straight line until I arrived at the office, more or less on time (the few times I paused to take pictures of the watch more than made up for any time savings).

When I arrived, I noticed that my iPhone's battery had dropped by five percent. I did send a couple of emails during the walk, but the watch's navigation mode was mostly responsible for that hit to the battery. It's important to note that, like with many of Apple Watch's functions, your phone handles the processing here. That helps reduce the power draw with the watch itself, at your iPhone battery's expense.

I wasn't able to figure out how to view the watch's current battery life until many hours later (there's a bit of a learning curve when it comes to just about everything with Apple Watch), so I don't know how my morning walk factored in, but I did end the day with roughly 70% left, which isn't bad at all.