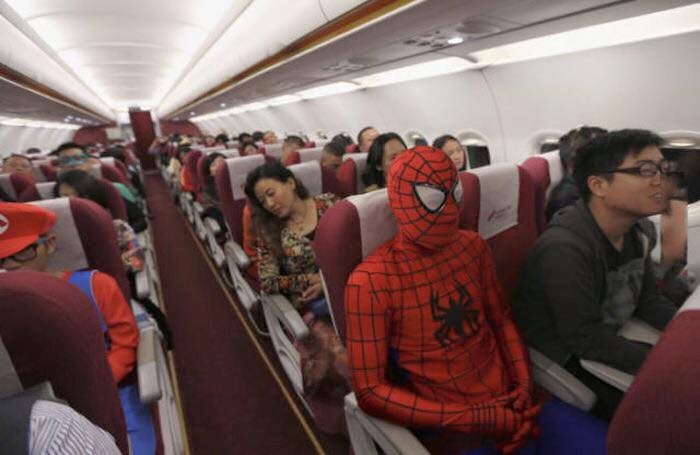 Insider Series: The 8 Worst Types of Airplane Passengers
This post contains references to products from one or more of our advertisers. We may receive compensation when you click on links to those products. Terms apply to the offers listed on this page. For an explanation of our Advertising Policy, visit this page.

Editor's note about our Insider Series: TPG Contributor Carrie A. Trey shares some of her most interesting stories and perspectives in this Insider Series article. Please remember that Ms. Trey's opinions and statements here are her's and her's only, and they do not reflect the opinions of the TPG Team. Disclaimer out of the way....please enjoy this latest installment from the one and only Carrie A. Trey!

Sure, it's April Fool's Day, but for this week's installment of our Insider Series, TPG Contributor (and working flight attendant) Carrie A. Trey shares some painful (and hilarious) truths about the worst/most annoying/ill-behaved passengers she encounters at 30,000 feet.

Writer's Disclaimer: This list and its contents, while entirely true and factually accurate, are meant to be enjoyed by those who know how to have a good laugh—either at their own expense or at that of their fellow passengers. If you find that what you read below makes you angry instead of having a good giggle, you’re quite possibly one of the passenger types I’ve mentioned. Should this be the case, I can only hope that after reading this, you'll either be embarrassed into behaving better when next you're aboard a plane...or you'll be inspired to take the bus, instead.

If you fly a great deal, you probably think you've seen the most deplorable airplane passengers/wankers out there, from Alec Baldwin to unruly couples wielding hot water, or that chatty guy you were stuck next to on your seven-hour journey from hell to New York last year. The thing is, from your secure vantage point, strapped into your own barely-reclining seat, you miss about half of what really goes on. From a trolley dolly’s perspective, these are the eight worst types of passengers that flight attendants have to deal with:

1. Non-Precious Metals. We love our Precious Metal passengers—the Golds, Platinums, Diamonds, Executive Platinums, 1Ks, Supercalifragalisticexpialadotious Platinums, etc.—who account for less than 10% of our passenger base, but over 40% of our revenue. You folks essentially sign my paycheck, and you also travel enough that for the most part, you don’t kick off and behave like a bunch of chavs every time you get on a plane.

It’s the Non-Precious Metals with whom we have issues—the bronzes, quartzes and cubic zirconias of the frequent flyer world. You manage to earn status after flying all of about three miles, and suddenly think you own the company. Well, you don’t—because if you did, you’d actually get that upgrade that you were waitlisted for at number 52.

Please stop shoving your coat at me and saying “34B—hang it.” If you were in 4B, you'd be important enough to have your coat hung. Stop having a tantrum when you don’t get upgraded, enough with the Olympic-level eye rolls when I don’t offer to bring you an extra filet from first class, and for the love of Queen and Country, stop waving your (non) status card about like it’s a Polaroid picture. No one cares.

2. Deaf/Mutes. No, I’m not talking about disabled passengers—who we quite like, as they're almost always polite and impeccably behaved. I’m talking about you lot who prefer to flick your wrist and wave like Queen Victoria rather than simply saying “I’m all done, thank you. The meal was lovely.” Take off your bloody Bose headset when I approach you, and have the decency to listen and respond. And when you do respond, add “please” and “thank you” to your vocabulary, just as you would anywhere else.

Manners cost nothing, and aren’t you all looking for freebies anyway? Nothing gets our goats more than when we have to ask a question four times because you’re too wrapped up in the rubbish podcast you’re listening to, only to be answered with a totally unintelligible gesture. Hit pause, listen and respond, and life will go on...without your meal being taken for a tour of the galley floor.

3. Emotional Support Passengers. Along with peanut and gluten allergies, the number of people who require an emotional support animal to travel has grown exponentially over the last decade. All of a sudden, people cannot travel without cuddles from Charlie the Chihuahua or Trina the Tabby. Do they go to the grocery store or the doctor’s office with Charlie and Trina? No, of course not. So why do they have to be nestled in their bosom for ten hours from London to L.A.? These folks think they’re a scoche more special than those who must put their animals in a carrier under the seat—or even in the hold, where I feel they belong. Put the pets away, put your big-kid pants on, and resume flying solo.

4. Bachelor/Bachelorette Parties. The London to Palma special, the New York to Miami shuttle, the L.A. to Baja redeye—we dread these flights packed with rowdy millennials bent on having one last weekend where they sow those last wild oats before entering into the lifelong, relentless union of marriage. It’s a 7am departure to Vegas, and they’ve all ordered triple vodka Bloody Marys before take-off (though even Bloody Mary herself didn’t drink that heavily so early in the morning); they then spend the rest of the flight trying to flirt with/hit on anything that moves, all while screeching at full volume, taking flash selfies, and generally making the rest of the plane (crew included) hate them.

Please, I beg of all you celebrants and future spouses—charter yourselves a bus and leave the rest us in peace and quiet.

5. The Right-at-Home/Raised-by-Wolves Crowd. We’re pleased when passengers feel like they're at home even as they’re hurtling through the heavens at close to the speed of sound, but some passengers apparently feel so comfortable that they'll do things onboard that I wouldn’t even do when I really am home. Putting feet up on the walls or on the seat in front, clipping your husband’s toenails (or your own), flossing in one’s seat, nose picking, spitting sunflower seeds on the floor, changing your child’s disgusting, feces-laden nappy on the same table you’re about to eat off of—these are all behaviors that I've routinely seen on the plane time after time, despite the fact that they should never, ever happen.

Were you raised by wolves? Well, that may have worked out well for Romulus and Remus, but unless you’re on the verge of founding one of the greatest cities in the world, the whole feral act is really unappealing and needs to stop. Now.

6. Children (And Their Parents). Children can be well-behaved on planes, but usually they’re not—and just as often it’s the fault of their parents. When your child blurts, “Give me a Coke” and you don’t correct them, don’t get mad when I say, “Let's try: 'May I have a Coke, please.'” You’re doing a rubbish job of parenting, and I’m helping you for free. You're welcome.

Children like to run amok on airplanes, presenting a great opportunity for you to teach your progeny some very important life skills: how to sit down, read a book (!) or watch a little TV, and be quiet...so that the people around them don’t want to gouge out their cute little eyes or shut them in the overhead locker.

And for the sake of all that's holy, please teach your children how to respond when people talk to them. I always try to address children directly, because if nothing else, it's polite. Half the time, children look at me like I’m speaking Greek, then turn to a parent to respond for them. Using a moment like this to teaching your kids how to communicate with people other than you will benefit us all—including you.

7. Complainers. “This chicken doesn’t really look like chicken.” Darling, that chicken was slaughtered, plucked, cooked in a curry sauce, frozen and then reheated in an airplane oven. Of course it doesn’t look like a bloody chicken.

“What do you mean there’s no piano lounge onboard with cocktail service? TWA has one!” No, love. They don’t even flipping exist anymore and lying to me about something you didn’t get somewhere else won’t make it appear here, either.

“Why are we leaving thirty minutes late? This is absurd.” Because there's terrible weather outside, most likely—and if I had any control over that, I sure as sherry wouldn’t be standing here listening to you vent, now would I? Best way to handle this situation is to ask me politely for a gin-and-tonic, which will calm you down and also make me happy, since I’ll probably have a sip or two just to make sure it’s been properly mixed. Good customer service knows no bounds.

8. Royals. I'm not alluding to the actual Windsors, but rather those of you who think you’re above everyone and everything else. Unless you receive mail at Buckingham Palace, please desist from acting like an entitled twit and follow the rules. When I tell you to turn off your mobile, turn the bloody thing off. When I tell you to put your seat back up, stop being an arse and put it up. I’m not doing this for my health, I’m doing it because it's a rule that, believe it or not, is actually for your safety and that of those around you. (Also, if I don’t, I’ll lose my job—and I rather like getting paid to sit by the pool in Rio and fly to my holiday in Palma in business class for free.)

This may come as a shock, but when you're on an airplane, you’re not the exception to any rule. Stay seated with your seatbelt FASTENED until the sign comes off and stop acting like you’re the sodding Queen of Sheba—who would never, by the way, remove her socks and put her feet on the seat behind you.

Any of you lot have a least-favorite passenger type—or a story of lamentable onboard behavior to share?
[card card-name='Citi ThankYou® Premier Card' card-id='221410120' type='javascript' bullet-id='1']