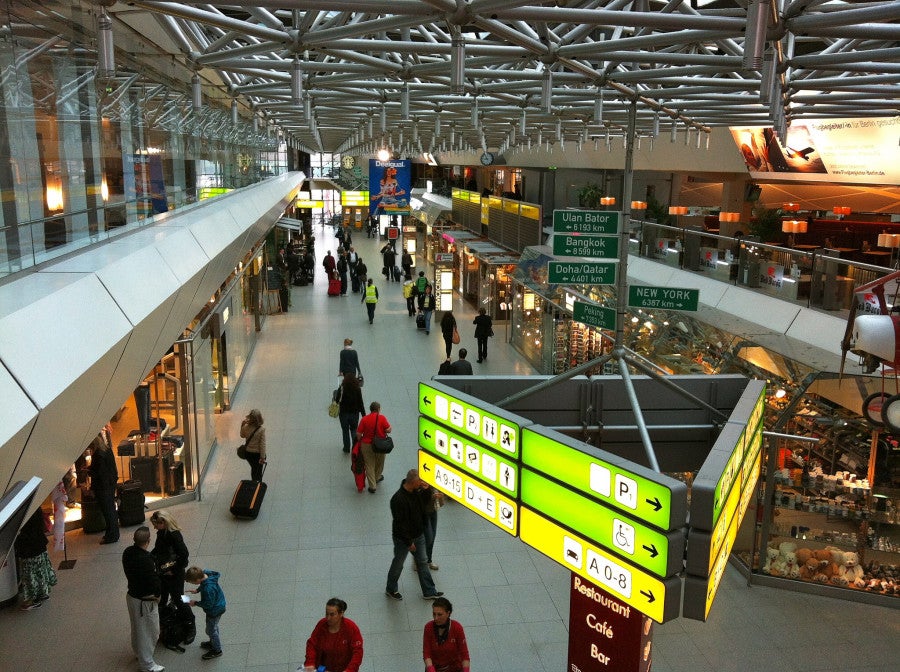 Layover Lowdown: Berlin Tegel Airport
This post contains references to products from one or more of our advertisers. We may receive compensation when you click on links to those products. Terms apply to the offers listed on this page. For an explanation of our Advertising Policy, visit this page.

Our “Layover Lowdown” series features airports and destinations around the world where you’re likely to be stuck between flights, offering tips on navigating and spending time in the airport, as well as some things to do if you find yourself with time to explore the nearby city. TPG Contributor Katie Hammel guides us through Berlin Tegel Airport.

Berlin’s main international hub, Tegel Airport (TXL) was built in a hurry in 1948, during the Berlin Airlift. It was constructed in only 90 days and—well, how do we put this nicely?—you can tell. That's not to say Tegel is a dump, but that the compact airport simply wasn't built to handle the volume of traffic it does now. In fact, it's been expanded several times in the last few decades, with waiting areas and carparks converted into additional terminals. Since the early '90s, plans have been underway to replace Tegel with a larger, more modern airport, Berlin Brandenburg Airport (BER), but after several delays and missed opening dates, it looks like that airport won’t open for at least a few more years.

The upside to Tegel's compact size is that it's usually a very short walk from the door to your gate, while the downside means less space for a long roster of services and amenities. If you find yourself with a layover at Tegel, you probably won’t spend too much money, given the lack of choices compared to other major hubs (silver lining, right?). Even better: if you can make it out of the airport, you’re less than five miles from one of the greatest cities in the world.

There are four main terminals at Tegel, which makes it sound larger than it really is. The main terminal is Terminal A, most notable for its hexagonal design, which has an open center. This is where the major airlines and most trans-continental flights arrive and depart and where most services are located. The other terminals are much smaller and were really stop-gap solutions as the airport’s traffic increased. Terminal B was originally a waiting area converted into a terminal. Terminal D serves smaller aircraft (its lower level is referred to as Terminal E) and Terminal C predominately serves AirBerlin flights.

In most cases, you’ll need to transfer terminals on your connection, which requires going through security again—and that’s fine, as most (though not all) of the services are in Terminal A’s main hall.

Aviation geeks should head to Terminal D, to the open-air Visitors Terrace. Open 10am-4pm on weekends in winter and daily from 8am-8pm the rest of the year, the terrace offers prime plane spotting from the roof. Admission costs €2/$2.11 for adults, €1/$1.11 for kids 2-12 years (no charge for kids younger than 2) and pets and luggage are not allowed.

Tegel is not a great airport for shoppers, with only a handful of options. Before security, you can grab some hosiery from Wolford, shades from Sunglasses by Pfendt Airport Optic, browse books at Pocket Shop, buy new luggage and other travel gear at Lufthansa WorldShop or snag last-minute souvenirs from Bon Voyage. For a sugar rush, sample some chocolate treats from Leysieffer Confiserie and if you need some new duds, try Marc O’Polo or Esprit.

Dining options are a bit more varied, both before and after security. Pre-security, your best options are the Restaurant Red Baron, burgers at Cindy’s Diner, or currywurst at EsSBahn (located outside in a converted S-Bahn car). And there’s plenty of coffee: Coffee Fellows, Illy Bar, Kamps, Berlin Coffee and Starbucks will keep you caffeinated between flights.

Post-security, you’ll find some good options as well; there are more sandwich shops and cafés, including a Marché Bakery in Terminal C; Bavarian and Austrian food at Augustiner in Terminal C; and Berliner Pilsner Bar in Terminal A.

Berlin has one of the most comprehensive and efficient metro rail systems in the world. Unfortunately, that system doesn’t run to Tegel. However, Tegel is only five miles northwest of the city and is served by several bus lines that will either take you in the city or deposit you at a nearby S- or U-Bahn station.

The airport is in Zone B, so you’ll need to buy a single ticket valid for Zone AB if you’re going into the city. A ticket good for two hours costs €2.70/$2.85 for adults (€1.70/$1.80 for children 6–14) and can be purchased in the main terminal or at ticket machines outside Terminal A. Tickets must be validated once you’re on the bus.

As for which bus to take, that depends on where in Berlin you’re headed. If you want to venture in the heart of the city, your best option is the TXL Express Bus, which will take you to Brandenburg Gate in about half an hour, or farther east to Alexanderplatz, near the TV Tower, in about 40-45 minutes. If your destination is easily reached via S-Bahn, you can take the TXL bus to station Beusselstraße (10 minutes); to connect to the U-Bahn, take the X9 to Jakob-Kaiser-Platz.

If you have more money than time, skip the bus and take a taxi. Taxi stands are located at Terminal A and outside Terminals C and E. The ride takes about 20 minutes, depending on traffic, and will cost around €25/$26.50.

If You Have Half a Day

Berlin is big. Very big. Nine-times-the-size-of-Paris big. However, most of the main tourist attractions are clustered along the former border in the central Mitte district so even with just a few hours in Berlin, you can see many of the city’s most important sites, and still have time to grab a currywurst or doner kebab.

Take the TXL Express Bus to Brandenburger Tor (Brandenburg Gate), an iconic symbol of once-divided Berlin. The massive stone structure is adjacent to the lovely Tiergarten park, one of Berlin’s many green spaces and an attraction in its own right.

From here, walking less than four miles, you can visit the stunning glass dome of the Reichstag (Parliament); the incredibly moving Memorial to the Murdered Jews of Europe, a stark field of 2,711 concrete pillars of varying heights that immediately disorients those who walk inside; the Topography of Terror, a free, open-air exhibit that chronicles the atrocities of the Nazi regime; Checkpoint Charlie, the site of the former infamous border crossing and a museum that documents the lengths people went to in order to escape the East; the Bebelplatz, a memorial to the Nazi book burnings; the DDR Museum, a fascinating look into life in East Germany during the Cold War; and Museum Island, home to five museums as well as the Berliner Dom (Berlin Cathedral).

Walk a bit farther east and you’ll pass the TV Tower and end up in Alexanderplatz, where you can catch the return bus to the airport, or, if you have more time, ride the S-Bahn to the Eastside Gallery—a 1.3 kilometer stretch of the former Berlin Wall painted with murals by artists from around the world.

If You Have a Full Day

Even with a full day, you couldn’t hope to make a dent in Berlin’s list of 400+ museums and galleries, hundreds of memorials, and more than 2,500 parks and gardens. Instead, pick what interests you and commit to using the S- and U-Bahn to get around quickly. Or better yet, do as the Berliners do and go by bike (there are dozens of rental shops and prices are reasonable). If you plan to visit the Reichstag get tickets in advance so you have a guaranteed spot and if you plan to take in the view from the Berlin TV Tower invest in a skip-the-line pass. A hop-on, hop-off bus tour of Berlin can also help you see more in less time.

Check out the major sites listed above but save some time to relax at one of Berlin’s many parks. Mauerpark hosts a weekly flea market and open-air karaoke, and Templehof, a former airport where you can run and play on the runways, is a memorable place for a picnic. To experience a more modern version of Berlin, check out neighborhoods like Kreuzberg, Neukölln, and Freidrichshein, or take a guided (or self-guided) tour of the city’s amazing street art.

If you’re going to attempt a lot of sightseeing, or plan to use the U-Bahn or S-Bahn system a lot, consider a Berlin WelcomeCard. An AB Zone card (which covers transit to the airport) valid for 48 hours costs €19.50/$20.60 and includes free transit on all public transportation and savings of 25-50% on more than 200 attractions like the DDR Museum, Humbolt Box, assisi Panorama, the Jewish Museum and the TV Tower. Depending on which places you plan to visit, you might be able to save more than the cost of the Card—and when you add in free transit, that’s a great deal.

Half mile from the airport with shuttle service, the Mercure is the closest accommodation option to Tegel. There’s a restaurant, outdoor pool, free WiFi and rooms start at around €100/$105 per night. Other nearby options are the Dorint and Ibis, both close to three miles away and reached via public transit, but when the city is only five miles away, why not stay in the heart of the action, unless you’re arriving after very late or departing very early.

Located a short walk from Alexanderplatz (and the bus TXL bus pickup), the Hotel Indigo has a lively bar, onsite restaurant and fitness center, free WiFi and available bike rentals. Room rates start at around €100/$105 per night or 20,000 IHG points. Set on the beautiful Gendarmenmarkt square in the heart of Berlin, the Hilton Berlin is another great option. Room rates start as low as €106/$112 or 50,000 HHonors points per night. The full-service Hilton Rewards category 7 hotel has an onsite fitness center, spa, business center, and four dining options.