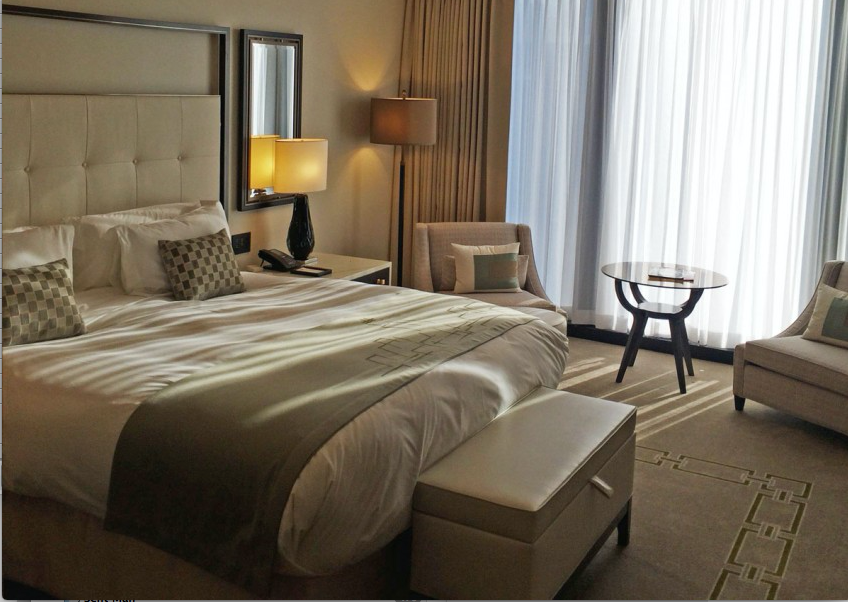 Hotel Review: The Langham Chicago
This post contains references to products from one or more of our advertisers. We may receive compensation when you click on links to those products. Terms apply to the offers listed on this page. For an explanation of our Advertising Policy, visit this page.

While hosting my latest TPG Reader Meet-Up in Chicago last weekend, I was supposed to stay at the W Lakeshore Chicago, but when checking in at 5pm, I was told that 2 out of 3 rooms were not available and that my suite wouldn't be available until 9pm or so. I had a live TV interview to prepare for and dinner plans, so I was not pleased with the poor service at the W and their attitude was less than conciliatory- they simply blamed ongoing construction for the mix-up and didn't offer compensation, until I asked and then they finally agreed to pay for dinner- which wasn't an option since I already had plans.

The Langham Chicago is a high-end, business-traveler-friendly property set in a downtown skyscraper along North Wabash Avenue, where The Loop meets the Magnificent Mile. Truly, I can't say enough good things about this hotel - but I'll try!

Langham Hotels date back to 1865, when the luxury chain's flagship property opened in London's Marylebone district. There are now 13 Langham properties (mostly in Asia), with three hotels in the U.S. - Pasadena, Boston, and this one in Chicago. (Chain affiliates include Langham Place properties [one in New York City], Eaton Hotels, and Shanghai's 88 Xintiandi.)

The Langham's loyalty program, 1865, has four status tiers: Explorer, Gateway, Voyager and Destiny, the latter of which is offered by invitation only. Explorer status is automatic, while the Gateway level requires a total of three stays and Voyager a total of five stays, both within 12 consecutive months. The 1865 program doesn't earn you points, but it does have 25 airline partners that allow you to accrue miles for your stay.

Occupying the first 13 floors of the landmark IBM Building, a 52-story skyscraper designed by famous 20th-century architect Ludwig Mies van der Rohe that's listed on the National Register of Historic Places, The Langham Chicago is a relatively new property that opened in July 2013. The hotel has 268 guestrooms and 48 suites, all offering wide views of downtown, the Chicago River and Lake Michigan. Its on-site Mediterranean restaurant, Travelle, was designed by architect and interior designer David Rockwell, whose other projects include JFK's Jet Blue Terminal 5. The fitness area includes a 67-foot-long indoor swimming pool, and the sprawling Chuan Spa is well worth a visit (more on that in a minute).

... that is, if you don't have access to the amazing Langham Club Lounge, my favorite feature of the hotel. Located way up on level 12C (floor 13), this 4,000 square-foot modern beauty features what seems like a mile's worth of white marble, and in some areas, dark wood floors. And just in case you can't see what you're looking for at first glance out of the floor-to-ceiling windows, there's a shiny brass telescope at your disposal. Club guests can check in and out via the lounge's private registration desk, and in case you've already had to check out of your room in advance of a late-night flight, there's a master bathroom with a changing area available. If you want to get some work done outside of your own room, a cool, quiet little Writer's Corner has a reading library and two computer workstations/desks.

I was especially wowed by the food service at the Club Lounge. Most of the dining area's tables and white-leather chairs are lined up alongside an impressive view of the city and the Chicago River. The complimentary breakfast buffet offers anything from a little fruit to a fresh-made omelette with bacon, as well as all the custom-made espresso drinks your nervous system can handle.

In the afternoon they serve an English-style tea, and all day long Club guests have access to a wide variety of snacks - from healthy to, let's say, less healthy.

Each evening, they serve a selection of warm canapés and put out a great bar selection so that Club guests can have cocktails by the lounge's fireplace.

The sushi selection and shrimp cocktail spread offered in the early evening was simply mind-blowing. I'm not 100% convinced I didn't eat my body weight in rolls. Or shrimp. Or both.

Elite status within the Langham's 1865 loyalty program doesn't gain you access to the Club Lounge - only booking a Club level room or suite will get you there. My own Langham Club Grand Room (127), was on the hotel's top floor, and came with a King bed and perks like comped in-room Wifi, valet service packing and unpacking (which is about the most decadent service this frequent traveler has experienced), tailored concierge service for arranging reservations, garment pressing (up to three items), and use of the hotels car service for local travel, subject to availability.

The huge bathroom was paved in yet more marble (as well as granite and Travertine limestone), and featured a rain shower, a full bathtub (or at least what would be a full bathtub for a shorter person) and amenities from the hotel's on-site Chuan Spa.

My room also came with a 55" LCD HD TV, an espresso maker, a writing desk, and a city view. Here's a quick video I shot of my room:

When you're a Club Level guest at the Langham, you spend a lot of time traveling to the hotel's 12th and 13th floors in its mirrored, Art Deco-style elevators. Fortunately, these are really cool - a little like being in an elegant funhouse.

During my stay, I treated myself to a couple hours at the Chuan Spa, a 22,000-square-foot urban sanctuary of pampering, and would highly recommend the experience to all visitors. The Chuan Spa features a 67-foot swimming pool and workout center, and follows the principles of traditional Chinese medicine. Before your treatment(s), you're given a brief questionnaire to help you and your massage therapist or aesthetician determine which of five different elements are out of balance in your body. Then you get to indulge in a Chuan Bathing Ritual, where you wander through a handful of different rooms, including a salt-paved sauna and a chamomile-scented steam room. The treatment room for my Chuan Body Elements massage-and-scrub treatment (1 and 1/2 hours, $245) was sizable, and when I finally tore myself away from the spa, I felt extremely relaxed.

In case it's not yet clear, I thoroughly enjoyed my stay at The Langham Chicago. I thought every aspect of the service was stellar, and every time I came back to the hotel I felt welcomed as though I was home. I'd wholeheartedly recommend a stay here on your next trip to Chicago, especially if you can snag a room or suite at the Club level.