Yesterday I was helping a family member book a flight to Washington DC (I’m sure lots of you act as the ‘family travel agent’ as well), and after we had completed the booking we were offered the opportunity to confirm a first class seat for $159 each way.  That’s not an insignificant amount of money, but it certainly struck me as discounted compared to what the normal cost is to buy up to first from that fare.  This was a non-elite passenger who purchased a round trip ticket from Houston to Washington DC for $379, which is actually a pretty decent price for those two markets outside of a sale or fare war. 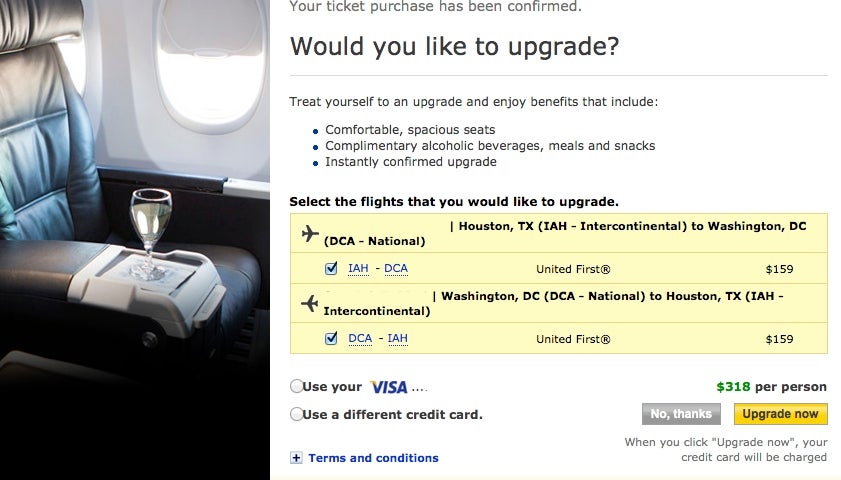 The $159 upgrade price displayed via a pop-up right after booking the ticket.  We declined to spend the money for the upgrade, but it did strike me as interesting, and certainly a lower price than I normally see to upgrade on United on a 3 hour flight.  After we declined the upgrade on that screen, the price that was offered to upgrade each segment when going into the reservation was $720+ each direction, so clearly the $159 was a very discounted price compared to that rate. 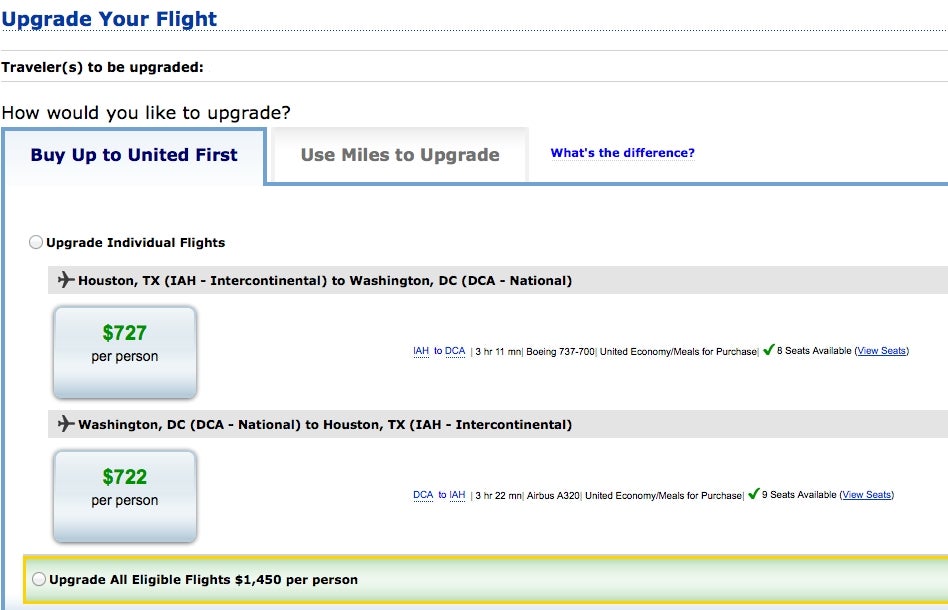 We wouldn’t have paid the extra money in this case regardless, but I think United might see a better conversion rate on these offers if they marketed them as a “one time only offer” and gave the head’s up that if you didn’t accept the offer then that the price may be (much) higher later.  Not only would it probably be better marketing, but it would be a fair warning to the consumer who might be on the fence about whether to spend the money for the upgrade.  If my family member had been reasonably interested in that upgrade, but wanted to think on it a bit, they would have been out of luck when they went to buy even a few minutes later as the price over 4x after we clicked off of that screen.

Once upon a time in my pre-elite days with United/Continental, I was offered cheap upgrades to first when I checked into flights (sometimes referred to online as “Tens of Dollars upgrades”), but rarely were the prices majorly discounted at the time of purchase.

I’m curious as to whether you have also recently seen some of these discounted first class upgrades at the time of purchase, and whether the price jumped as soon as you clicked off of the pop-up.

Summer Hull aka Mommy Points, ran the Mommy Points site for families who want to travel more for less using miles and points for seven years and now heads up TPG Family when she isn't exploring the world with her own two girls.
You might like
United is giving scaled-back food and drinks a big inflight boost
News
9h ago
Get $120 back after spending $300 on Delta with newest Amex Offer
News
Yesterday
170 days and counting: Cruisers cry foul as Crystal Cruises refunds fail to arrive
News
Yesterday
Chase Sapphire Preferred® Card